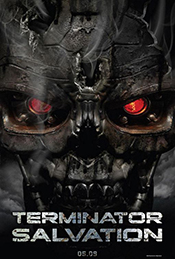 In the year 2018, the humans are at war with the machines. In the past, the machines torched the Earth, fearing that the humans would attempt to shut the machines down. The war is raging, and only one man can save us all: John Connor.

However, this is not his movie. This movie is about Marcus Wright (Sam Worthington), a man convicted of murder, sentenced to death and executed long before the start of Judgment Day... except that he's not really dead. Somehow, after the bombs, the death, and the beginnings of the war with the machines, Marcus wakes up in the mud, unaware of anything that's happened for the last couple of decades.

Marcus is looking to get home, to get some place familiar. He's also looking for a little redemption and a little salvation. Marcus is our everyman character, and we view much of the wasteland that is L.A. from his perspective. As Marcus grows, we grow with him, learning more about his past, what's going on with him, and why he doesn't remember a good chunk of time.

Also, why he doesn't look like he's aged at all since the war started.

In theory, a Terminator movie set during the war with the machines should work. Watching John Connor (played in this movie by Christian Bale) drive around blowing stuff up and making everyone know he's the man that's gonna save their ass should be a heckuva movie. Terminator Salvation is not that movie. Terminator Salvation makes itself content with just giving us a few interesting scenes interspersed with our various characters talking about how bad the machines are -- in between bouts of sitting around looking pensive.

Most of all, Terminator Salvation is not a war epic. It outlines the first of many battles, and shows John Connor slowly taking over the role of a leader... when he's actually on screen at all.

As mentioned from the description at the top of this article, the movie is more about Marcus than Connor. Don't get me wrong, Marcus is a compelling character, and if the movie is going to focus on anyone besides John Connor, at least they picked one that's easy to get along with... except for that fact that he's a convicted (and executed) killer. We never really learn what he did to get thrown in prison, and we never learn why he's wanting to make amends and set things "right"; He just starts acting good and we have to go along with it, all without the expectedly necessary character development that's supposed to be provided to make us care.

So, fair enough, we're lacking a little in the early development, but the actors do what they can with the material they are given. I like Sam Worthington as Marcus, and even if I don't know why he's now a good guy, I find myself trusting that he'll do the right thing and find his salvation. As I said before, he's a compelling character and that's entirely based upon Worthington's performance.

Another standout is Anton Yelchin, who plays a young Kyle Reese (for those keeping up, that's John Connor's daddy). Anton has a few good scenes where he can act both tough and innocent, young and yet trying to be an adult in a terrible world. I liked Kyle Reese a lot, and this is because of how well Anton played him -- he certainly didn't have a lot to do in the movie, and he wasn't given a whole ton of character development, but Anton made the character work.

Less successful was Bale, who played John Connor as if he were Batman in the future. He had that same gravelly "I'm Batman" voice, that same dark and grizzled stare. I kept waiting for him to yell out to Alfred "I'll be out late," then jump into the tumbler and drive right into the heart of Skynet, sending every last machine to Arkham Asylum (where, with the help of the Joker, they'll escape to torment Vicky Vale another day).

Thankfully, despite a lack of story or character development, the action is at least (for the most part) quite good. There are a number of excellent set pieces, the biggest of which is an extended chase sequence across a desert and over a half-wrecked bridge. I enjoyed the action when it was going on...

Well, with the exception of the big climax. This one just had too many moments of terminators (T-800s) throwing humans around like rag dolls instead of grabbing them and breaking them in half when they had the chance. It seemed a little too cartoony and very illogical. Over and over the humans get caught by the machines, then get thrown into the wall by the machines, then get up, and the process continues. What's the point? It's illogical that these machines which can bend metal bars into pretzels would get caught brawling with a pathetic meat-bag when it could just snap the human's neck and move on in the span of five seconds.

Having the climactic fight sequence fall apart from a complete lack of logic doesn't help the flick -- the movie goes out on a whimper instead of a bang, lessening my desire to watch it again, which is sad as I enjoyed up till the last fifteen minutes.

Terminator Salvation is a movie that tries: it tries to give us a movie we haven't seen before, one where Terminators don't travel back in time at any point during the movie. It also tries to give us a new character to get attached to, as well as make up for a lack of a meaty story with lots of action and plenty of decent acting.

Sadly, the one thing it doesn't manage to actually succeed at is being great.