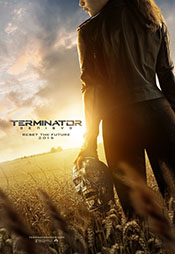 As one of the apparently relative few to see the new Terminator movie this weekend, I find myself in a position to discuss a big-budget holywood movie before too many other people. Terminator Genisys turned in respectable money this weekend, actually beating projections for the five-day long weekend (starting on Wednesday before anyone even had time off, because Hollywood), although those numbers are a bit anemic when you consider the kinds of bank movies pull in now. T5: The Re-Judgement-ing grabbed north of $40 Mil over the five-day, $27 Mil for the exclusive weekend, and while those are decent figures, it's not what the studios probably wanted to hear.

For perspective, Mad Max: Fury Road made the same amount ($40 Mil) in just three-days and it was speculated to be a flop (although it's become quite a smash due to good word of mouth). T5 did worse, over-all, and it's doubtful it will have the same kinds of legs as MM4. But hey, maybe I'm wrong. Maybe, once the dust settles over this long weekend and people get tired of seeing dinosaurs fight (over in Jurassic World), T5 could find its legs. I just don't think it will.

See, for as much as it gets right, Terminator Genisys is just not a very good movie. It's decent, don't get me wrong, and for all the nay-saying I did a few months back when it's seconds, truly wretched trailer came out, the movie wasn't the out-and-out disaster it could have been. I mean, sure, I saw it hoping it would be a bomb, just because sometimes I love to watch shitty movies (my collection is full of them because there's a certain charm to a terrible film). My expectations for T5 were low, they were exceeded, and I came away happy with the couple of hours I spent in the theater.

But that doesn't make the new movie a good flick, just a watchable, tolerable one. It's not bad, so it's better than Terminator 3: Rise of the Machines, and it's not boring, which puts it ahead of Terminator Salvation, but it's just not very good either.

The movie does start pretty well (especially if we ignore Kyle Reese for the moment). The future we see at the start of the movie is the same one glimpsed in the first two flicks -- bleak, dangerous, full of terminators. But there's hope, since John Connor is about to lead his armies to Skynet to hand the machines one last, fatal blow. It's a moment to cheer.

We're then shot, from there, through time to the start, more or less, of the first Terminator. Kyle Reese shows up in 1984, has to protect Sarah Connor, blah blah blah. Except that "blah blah blah" doesn't happen -- Sarah is already tough enough to take care of herself, and she has a terminator protector to boot.

(Hopefully this isn't spoilers for any of you. Everything I've mentioned so far as in the trailers, so I consider it fair game to discuss.)

This whole dynamic allows us to see scenes from the original flick mirrored and moved around to great effect. The issue, though, is that this part of the movie is, maybe, a third of the whole flick (at most), and then the movie degenerates into another "run from the bad guys slog" like the rest of the series has already done. All the truly effective villains are wiped out in the first half of the movie, and what we get (which I won't ruin even if the trailers already have) is a terminator that, while probably effective on paper, just doesn't come across as much of a threat.

Although maybe that has more to do with the film's rating that what the director wanted to do. Terminator Genisys, like Salvation before it, is PG-13. While, certainly, movies have become more violent and directors can get away with a lot in a PG-13 movie, the movie always felt like it was too eager to please without knowing how to do effective scares, and I have to assume part of that is because the truly effective scares would have required an R rating -- Genisys is a surprisingly bloodless movie, especially for a Terminator flick.

The big issue with the movie is casting, though. Not Arnold, who once again manages to find a performance as the T-800 that works (superior to his shoddy, bored work in Terminator 3). Not Emilia Clarke, either, who is able to make her Sarah Connor have an edge yet still convey a vulnerable side (just as Linda Hamilton was able to do -- if anyone nails the continuity between characters in this movie, it's Emilia Clarke).

No, the big hole in the casting chart is Jai Courtney. So far, in all of the various movies I've seen him in, Courtney has failed to impress over and over. He's good at being big and saying lines, but it never really feels like he invests in his characters (this is an issue I used to level against Channing Tatum as well, but Tatum has won more over in recent years, so it's not like I'm purposefully expecting Courtney to fail -- he does it all on his own). Besides which, Courtney in no way feels like a proper stand in for the Kyle Reese of old (as played by Michael Biehn). Kyle is supposed to be half-starved, lean, with wild eyes and a permanent case of PTSD -- in other words he's supposed to be the opposite of the huge, cool, collected terminators the heroes have to fight.

Courtney, though, while displaying none of the emotional range (as I commented before) is also too big, too healthy to be a warrior from the future. He'd play a good terminator, for sure, but as a human in this movies he's lacking.

In the end it just becomes difficult to invest in the movie because you can't care about one of the main heroes of the movie. I wanted to like this flick, and when I shut off my brain and just let it wash over me it was a good time. As the "proper sequel" to Terminator 2, though (which is what James Cameron called in an interview recently) it's lacking.

I'm sorry, I already have the proper sequel to Terminator 2. It's called The Sarah Connor Chronicles, and it's amazing.