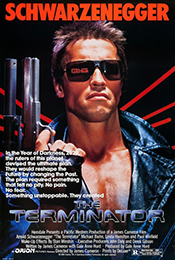 In the future, the machines have taken over. On August 27, 1997, Skynet, an AI responsible for running practically the entire world, nuked the world out of fear. Skynet was self-aware, and the humans wanted to shut it down.

The future is a dark, war-torn place. Led by John Conner, the humans battle machines, trying to win the war and rebuild their savaged world -- and the humans is winning. Skynet, realizing the human resistance hinges upon John Connor, sends a Terminator -- a killer cyborg played by Arnold Schwarzenegger -- back in time to remove John Connor from the timeline... by killing his mother before he's ever born.

John Connor is able to send someone back as well, a human -- Kyle Reese (Michael Beihn) -- to protect John's mother, Sarah Connor (Linda Hamilton). Kyle is able to get to her just before the Terminator, and this kicks off a race for survival, man against machine.

This simple premise (well, okay, except for the whole time travel aspect), makes for a very compelling story -- one can never claim the first movie in the series tried to do too much. This simple, stripped down storyline allows the movie to focus on doing two things (and doing them well): great action and focused performances.

Firstly, the action is intense. The movie features several action pieces -- gun fights, car chases, and explosions. This is a serious action movie that just so happens to have a sci-fi twist to it -- and the twist helps to amplify the action. The Terminator is relentless, a nearly impervious killing machine -- in a word, unstoppable. Against the machine, humans don't stand a chance, not face to face.

Running is the only option, and even that is a dangerous proposition -- the Terminator isn't worried about its own survival. In a car chase, the Terminator could set in motion events that would lead to its own demise so long as the target (Sarah Connor) is eliminated. This is what our heroes are up against.

Of course, all the action wouldn't be great if the movie didn't have solid performances to go with. Linda Hamilton plays Sarah Connor the way the character should be played (in this movie -- we get an appropriately different Sarah in the next flick). Sarah is afraid, a fish-out-of-water. Can she really believe what Kyle Reese is telling her, all that stuff about being from the future and killer robots? We get a solid range of emotions from Hamilton, from fear to confusion to trust. It's a nuanced performance, one that helps to carry the movie.

Less successful is Beihn as Kyle Reese. He wasn't bad, certainly not, but there just isn't much to Reese. He's a soldier from the future with one task, protecting Sarah. This he does well, and convincingly, but Beihn isn't tasked with playing a range of emotions, and his character does end up a touch flat and one-dimensional.

Of course, the star of the show is the Terminator. This was the role that gave Arnold Schwarzenegger Hollywood credibility, and for good reason: his Terminator is scary. Schwarzenegger conveys the cold, relentless killer perfectly. Acknowledgments would have to be made to the fact that Schwarzenegger is just a big guy, who's naturally imposing, and, coupled with his accent, he didn't have to do much to become the scary Terminator. That said, playing an unfeeling, uncaring killer isn't an easy job (as seen in the third movie where too often Schwarzenegger starts to peek out from underneath the "mask"), and Schwarzenegger is commendably up to the task.

Some note should be made about the special effects. These were cutting-edge when they came out, but sadly have not aged as well as they could have. The makeup effects used later in the movie, after the Terminator has taken enough damage and the metal is shown underneath (or an especially interesting scene where you get to see what is behind one of the Terminator's eyes) are good enough without being great. While they convey what you're supposed to be seeing, they aren't good enough to keep today's audience in the movie -- you end up thinking "oh hey, there's bad makeup."

Similarly, the stop-motion animation to show Terminators without skin (a walking metal skeleton) are awesome, but when the animation style is used on real, filmed backgrounds, and not staged backdrops, you can see the "wires," how they made the effects, and it just pulls you right out of the movie.

These qualms, however, can be forgiven when you consider age and budget. The movie is still great, even now, and when you really sit and think about the plot line, and how everything ties together, you're left with a film that's far superior than the sum of its parts.