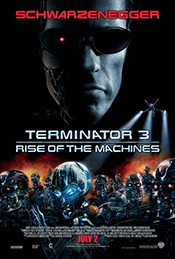 In the future, the machines attempt to destroy humanity. An AI, Skynet, became self-aware -- then nuked the world out of fear that humanity would turn on it. Sensing that the only way it could remain online and active would be to eliminate humanity, it started the war to wipe humanity from the face of the planet.

It almost succeeded in that goal.

The remaining humans fought for their lives. They formed a resistance. This resistance, lead by John Connor, waged war against the machines -- and were winning. Skynet, trying to turn the tide of battle, sent two assassin machines, known as Terminators, back through time to kill John Connor before the war removing him as a threat.

After the attempts on his life, John and Sarah went off-the-grid so Skynet couldn't try again. With John untraceable, Skynet went a different route: kill all of John's lieutenants before they could grow up. A new machine was sent from the future to carry out this mission as well as one more: ensure Skynet's birth (even though the Connors had already destroyed it once before). Will the war still happen, or can John stop Skynet before it even comes alive?

On paper, Terminator 3 seems like an interesting, if unnecessary, sequel. Terminator 2 tied up the series tidily, so it's hard to shake the feeling that T3 isn't anything more than a big-budget cash-grab.

Part of this is the fact that the movie clearly sets up future films. This movie isn't like the second flick, where it has a satisfying conclusion. T3 leaves threads purposefully hanging, making the whole experience far less satisfying.

This would be forgivable if the movie were better, but T3 is in no way the labor of love T2 was. Where T2 wanted to be a grand climax for the series, T3 is satisfied being a brainless action flick -- the story is little better than a chase movie, with Skynet thrown in as the omnipotent, off-screen villain.

Even still, a big, dumb action movie would be fine if it weren't for T2. Everything in this movie is compared, for better or worse, to what came before. This is especially true of the action. T3 blatantly wanted to up the stakes from T2 -- bigger action, larger explosions, harder hits, more, more, more.

The new Terminator, the TX, is supposed to be a Super Terminator, one designed to terminate other Terminators (presumably because the humans keep capturing T-800s and reprogramming them). The TX is made of liquid metal over a metal endoskeleton, and has built-in, futuristic weaponry. Fine and dandy, except that there's so much to the machine nothing really shines as impressive. Nothing about the TX can compare to the deadly menace of the T-1000, or the simple effectiveness of the T-800. There's no menace to this machine; The TX is so plainly over-powered that the second it sees John Connor, John should be dead (a pretty, Nick Stall shaped smear on the ground). The fact that, time and again, the TX fails to kill John shows how ineffectual all her gadgets really are.

To be fair, if the hero sent back in time to defend John were as over-powered as the TX, maybe things would be different. A TX versus a T-1000 would be an interesting fight (how one would reprogram a T-1000 is a question for another day). Instead though, the TX has to fight a T-800. (Well okay, a T-850, but it's the same difference as he's still played by Arnie -- he just has a different power source.) The T-800 has been done, and against a TX it's a poor choice of hero. Again, the TX should be able to dust off the T-800 (that's what it's designed for, after all), squash John and still have time for a latte before Judgment Day rolls around.

Yet, (because John is the hero of the series) the TX fails, leaving no dramatic tension to the flick. It just makes the film feel like a cartoon, not a tense action flick like the first two movies.

The movie isn't aided by the fact that the performances are all shallow or uninteresting. Nick Stall (as John Connor) is bland, either playing him confused, whiny or bored. We never get a sense that John is a leader, and this close to the war John should have a clear grasp of what he's doing and who he's meant to be. John should also be able to fight, to take on Terminators, and yet he just runs away. He should be a formidable foe for the TX (as Sarah Connor was for the T-1000), but he's practically useless. It's a waste of the character's potential.

The T-800 is a similarly wasted character. They take great pains to show that this T-800 isn't the same as the one from the second movie. They render all attachment to him moot... and then, later, want you to care about him as if here were the same character.

Arnold as the T-800 is fine but not great. He doesn't completely phone it in, but plainly this was a paycheck movie. There's nothing new here for him to do, so he just shows up, flexes some muscles, acts a little and then gets paid.

The real failure though, is the TX as played by Kristanna Loken. Kristanna has none of the quiet menace of the T-800, nor the (near) gleeful malice of the T-1000. She seems out of her depth, trying to act tough and stoic, but coming off as bland and uninteresting.

In the end, it boils down to one question: is the movie even worth bothering with? Sure, once. There are some potentially good ideas, even if they are squandered through brainless action and poor planning. Some of the sequences are worth seeing once, but you won't care to see them again.

And then there's the simple fact that this movie has the (dubious or not) distinction of setting up further films in a franchise that was originally intended to be only two movies. If you want to know some of the details about what happened before going into the new flicks, then you might as well watch this movie. For completeness sake, it is watchable, it's just (by far) the weakest of the series.