We Can See Your Future, You Monster

When it comes to action films there are few names that draw more attention than Tom Cruise. Say whatever else you will about the guy but there is no doubt the man throws himself into his action roles, taking them very seriously. Watching the guy hurl himself through one sequence after another while he runs and runs and runs is a sight that can power just about any action film. There's a reason so many of his recent films (including basically all of the Mission: ImpossibleIntroduced in 1966, the original Mission: Impossible featured a team of agents (with varying skills) heading out into the field to solve puzzle-box like cases on a weekly basis. This simple concept spawned a long-running series, a second series in the 1980s, and a hugely successful movie franchise starring Tom Cruise that continues today. films) have been big hits: people love to watch Tom Cruise do action. 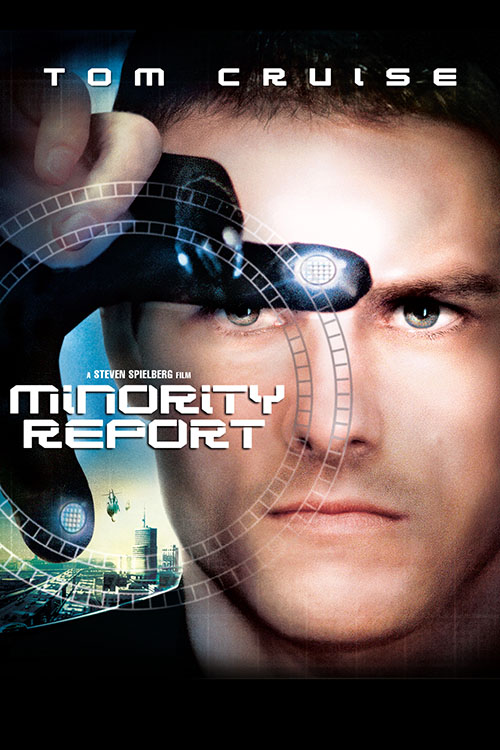 Pairing Tom Cruise up with a premiere director should be a no brainer: two people great at their jobs who can collaborate to make something even better, especially when that director is Steven Spielberg. How could this possibly fail? Well, if you look at the Box Office returns for the movie, it didn't. Made on a budget of $102 Mil, the film brought in $358 Mil, a nice, solid chunk of change for the era is was produced in. It even did well enough to rate a sequel TV series (which was little loved and short lived). This was a big hit at the time.

Culturally, though, it does seem like Minority Report was something of a dud. Burning brightly when it came out the film quickly faded from discussions. Now the movie is hardly mentioned at all, a film that both Cruise and Spielberg made that no one seems to care about anymore. It's one of those movies that was just good enough that people saw it but was neither so good nor so bad that it somehow managed to become a fixture in the minds of audiences. It exists, and then it doesn't, and the only times you'd know there was a movie called "Minority Report" now is when a site (like this one) brings it up again.

So what happened? Why did this movie come and go so quickly, fading away as if it never existed at all? Well, a lot of it has to do with the fact that the film itself, honestly, isn't that great. It's a big, ambitious sci-fi thriller based (loosely) on a story by Philip K. Dick and it has a lot of ideas (and information) it has to convey quickly to get the movie rolling. But to get this going we get a lot of time spent watching characters talk to each other, explaining the plot of the movie for us instead of just letting things roll. Every time something happens someone has to turn to another character so they (and the audience) can get filled in. it's Exposition! the movie, and wow is it a slog.

The film opens with hero Chief John Anderton, head of the Precrime unit of the DCPD. Precrime, as we learn, is a way of the law officers to see a crime (murder) about the happen within four days. The officers then study the visions they get (from a bank of three psychics who are kept in an isolation tank, feeding their visions of murders to a computer network) to try and figure out who will do the killing and why. The goal is to stop the murder and capture th perpetrator before the crime happens (but then prosecute them for the crime anyway). 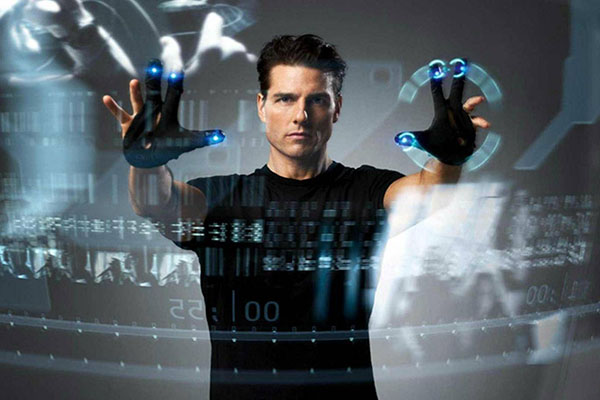 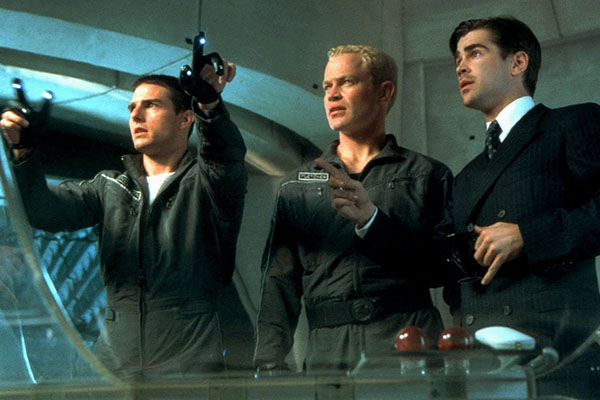 Things go off the rails, though, when the unit gets a vision that shows that Mr. Anderton will be the next lucky murderer. Not understanding how he could kill a man (let alone someone he has apparently never met before), Anderton goes on the run, dodging his (now ex-) co-workers while he searched for a solution to this case. He has to prove that he didn't commit the crime, and find out who really did, before the whole system, the Precrime system he believes in, falls apart (although soon we all learn that maybe it really should come down).

The movie does start off well enough, with an opening sequel that both explains how Precrime works while sending our hero and his unit out on the case. Its frenetic and interesting and a really highlight for the film. It's once this case is over and John's name comes up that things really start to fall apart. First there's the action sequences, which look beyond fake to the point of being laughable now, but then there's also all the exposition, the countless scenes of people talking while the plot of the movie drags on and on. It all leads to an action film with absolutely no energy, a two hour and fifteen minute bloated mess that's just no fun to watch.

Produced back in 2002 one could argue that the film looked great for the time and it's just the years that have made the CGI look bad. I certainly would allow this, to a certain extent, but expectations are higher for a film with Spielberg's name on it. Remember, this is the guy that made dinosaurs look real in Jurassic ParkWhile ever kid has dreams of seeing dinosaurs, Michael Crichton gave that dream a reality, at least on paper. His two Jurassic Park books spawned a movie franchise that's gone five movies strong (with no signs of slowing down), all because people love seeing dinosaurs made flesh.. He has the connections, and the vision, to make a futuristic landscape like what's seen in Minority Report look like reality. Instead it looks like fake plastic CGI, which is disappointing.

Worse, because it's all CGI and effects it wastes the biggest asset the film has: Tom Cruise. There's supposed to be joy in watching Cruise hurl himself through all kinds of stunts, doing the purposefully stupid shit to entertain us. If it's all fakery and artifice, though, then there's no energy to the action, no thrill in seeing Cruise "actually do this." It's just another actor against a green screen and the illusion, and the joy, is completely missing. The film's biggest special effect should be Cruise and it blows that, sadly. 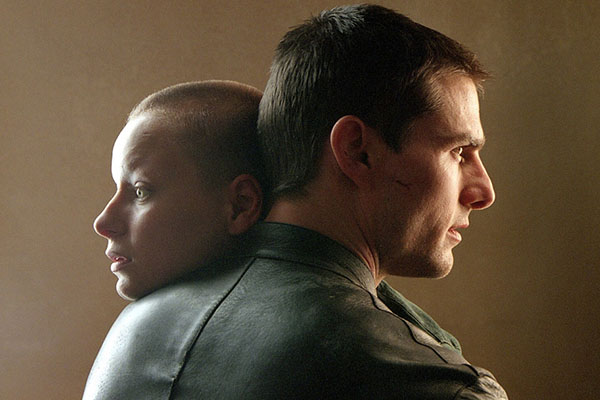 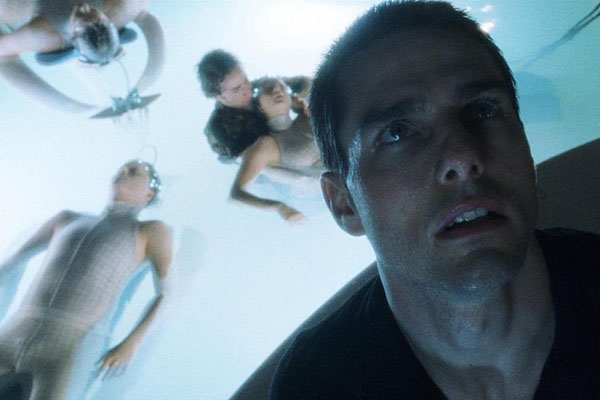 The worst part really is all the exposition. It gets bad when Cruise goes to visit Dr. Iris Hineman, the creator of Precrime, so he can find out why he's been framed for this murder, and how. This then leads to a lengthy exposition dump that is so over-packed with ideas and techno-babble that there's no way anyone could bother following it or caring. This scene reeks of the writers not having any better way to dole out this information so they made an exposition character and just absolutely loaded up her dialogue with all the information the film needed to convey. This film sucks all the energy out of the movie. From this point forward the film never really finds a way to get it back.

Scene after scene we get characters over explaining everything. "You have to do this before you can do that, John." We watch hi go along, talking to each and every character like they're NPCs and he's browsing their whole dialogue tree. It's tedious to have to do this in a video game but its even worse in a movie when all you want to do is get back to the cool sci-fi dystopia. Minority Report had a big world and a rich idea of its setting riding just on the periphery of what we see but we never get to explore it because the film is too busy explaining its core story over and over again. It's awful.

That, really, is the reason why the film failed to make a lasting impact: there's no zest to it at all. It has some pretty visuals, and a really solid opening sequence, but once they film starts you quickly discover there's no film here. It's a long set of dialogue trees strung together endlessly until the film weakly ends. There is potential to the movie, and that's likely why people flocked to it initially, that storytelling potential. But once the film is done, and you realize how empty the whole thing really was, you end up dismissing the movie. It exists, and now you never have to watch it again.