How About a Nice Trip to Mars?

Philip K. Dick is an author that certainly made quite the impression on Science Fiction. Although there haven't been that many adaptations of his works (certainly, looking at a list of said adaptations, there's less than I expected), most of them went on to be big hits that then influenced other films and shows. Think back to some of the most influential Sci-Fi of the last couple of decades and you'll certainly stumble across something based on one of his works, or inspired by his works, without even going that far down a list. 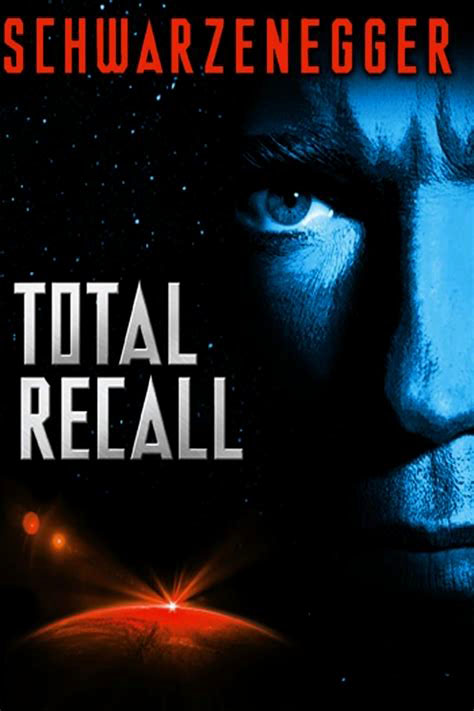 Something about what he wrote struck a chord. Certainly he tapped into a kind of paranoia, a feeling that you can trust what's going on around you. Science Fiction is supposed to not only have a predictive quality to it (that future sense that authors strive for), but they're also supposed to shine a light back on the thoughts (and fears) of the then-current generation. That's probably part of the reason Dick's works still resonate: that paranoia that he felt back in the 1940s and 1950s, during the hight of the "Red Scare" and McCarthyism, hasn't really gone away, it's just changed and morphed and continued on. Big Brother is watching, always and forever it seems.

Released in 1990, Total Recall was the perfect convergence of three factors: Arnold Schwarzenegger's dominant career of the 1980s and 1990s, director Paul Verhoeven massive blockbuster works, and the continued interest in Philip K. Dick's works. This film takes all those elements and blends it into something that feels so very much of its time and place -- this is a movie that could only have been made in the 1990s -- and yet still has this funny, timeless sensibility to it that keeps it around all these years later. It's not a perfect movie but it is perfectly watchable 30 years after its release.

The movie introduces us to Douglas Quaid (Schwarzenegger), a construction worker on Earth he dreams every night of Mars. His wife, Lori (Sharon Stone), wants him to forget all about mars so they can focus on the new life they're building together, but Quaid can't ignore the pull he feels for the red planet. When he sees an advertisement for Rekall, a business promising "the vacation of your dreams" -- and by that they mean they'll implant the memories of a vacation into your head without you having to go on it -- Quaid can't help but go to Rekall for his own Mars adventure. He signs up for a two week package, gets the bonus storyline that casts him as a Secret Agent, and even picks out his perfect dream woman to come along on the vacation with him in his mind.

Things go wrong, though, as soon as the memory procedure begins. It seems that there's already been extensive memory work done in his head. Soon Quaid is on the run from men that want to kill him because, by going to Rekall, he's screwed up the memories they implanted in his head. Then he learns that he's not even really Quaid, he's Hauser, and he's been dumped on Earth because he was working with the rebels on Mars to free the people from the iron rule of Cohaagen (Ronny Cox). Quaid has to go to Mars to figure out how to help, to finish what Hauser started, and to try and get some semblance of his life back. Or, maybe, it's all in his head and he's slowly getting lobotomized on a table at Rekall. Hard to know for sure. 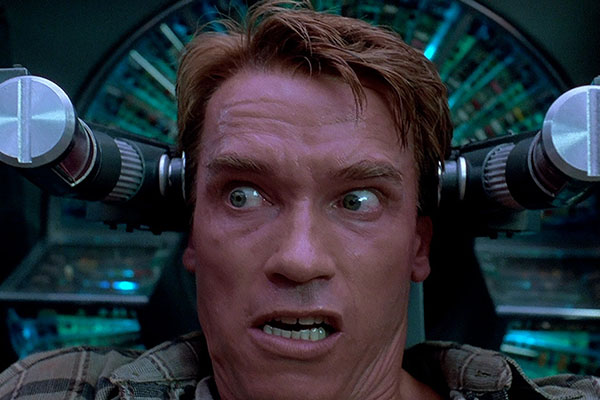 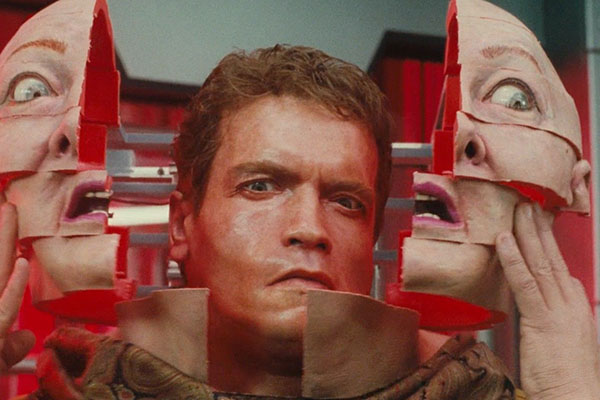 What's interesting about Total Recall is that it works on two different levels, masterfully so. On the one hand you can take the film as just a simple 1990s action film, like so many that lead actor Schwarzenegger starred in during that time period. It has the violence, the gun fights, the action, the cheesy one-liners, and everything else you expect from that stars long line of films. As directed by Verhoeven it's a perfect bit of 1990s action cheese and it's infinitely watchable just on that level alone.

Verhoeven has a strong directorial eye and he's really good at action Sci-Fi. Remember, this is the director that also made the original RoboCop and, later, Starship Troopers. What he puts into his film are his sensibilities -- he doesn't shy away from violence, or gore, or thrills -- but he also makes a statement. A film like Total Recall fits perfectly into his style not only because of the hyper-violence but also because it allowed him to play around with reality, to make a statement about corporate greed and the idea that Big Brother is really watching. This film clearly interested the director as his fingerprints are all over ever inch of this movie.

And that gets us to the other level that this film actually works on: it's quite a little head trip. Even before Quaid goes to Rekall there are little hints that maybe not everything is right in his world. It's nothing overt, just little reactions from the people he knows that could hint there's something more going on... or just that they're mad at Quaid for being stupid. Once he goes to Rekall, though, that's when everything goes off the rails for the character and the moments build up, more and more. Is he going to mars because he has to save the people there or is he going because that's the trip he paid for and he's just acting out his secret agent fantasy. Does he meet Melina (Rachel Ticotin) because she's the woman he had added to his fantasy trip (because he dreamed about her before), or was he dreaming about her because she's real and he inserted her into his trip because he really knew her?

These elements of the film aren't the centerpiece, that would be the action and adventure of Quaid on his trip to Mars, but there's enough lingering in the background that you never can be sure what's reality and what's fiction. The film never says, ending on a upbeat note for Quaid and Melina, but also with Quaid noting, "this could all be a dream," to which Melina replies, "then kiss me before you wake up." There's three versions of reality at play there -- this is what really happened, or this is the trip Quaid explicitly paid for, or he really is dead on a table getting lobotomized. The film ends with the kiss but you're left wondering what was truly real all along. 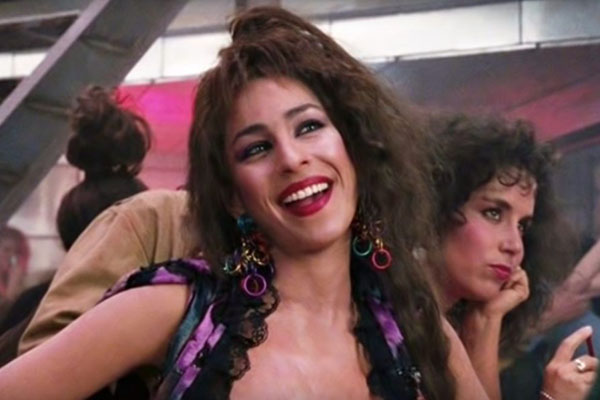 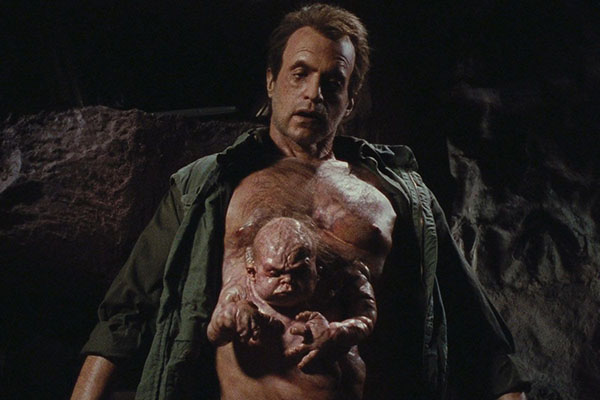 It's a masterfully made film for both of its aspects, the 1990s action cheese and the Sci-Fi mindfuckery. That's a hard balance to strike, as evidenced by the fact that latter attempts to capitalize on the Total Recall name -- a TV movie that was supposed to launch a series, Total Recall 2070, and didn't, and then the 2012 remake -- failed to find anywhere close to the brilliance of this original film. Yes, it's big and dumb and loud, but that's part of why it works so well; it dresses up as a big, dumb action film (one with pretty solid action, effects, and set design, mind you) and then drops some pretty mind bending stuff right in the middle of it all.

Frankly, this is probably Verhoeven's best film (much as I enjoy RoboCop and Starship Troopers). It's him working at his best, using everything he had -- the budget, the stars, Arnold, and the concept from Dick -- to make the perfect 1990s action film. In that regard, then, it's probably also the best Dick adaptation (all you Blade Runner fans can just go on hating me) despite it treading pretty far from the source material (as so many adaptations of the authors works have done). It takes the essence of the story and blends it into an action film that becomes much more than the sum of its parts.