Wandering Off the Path

Source material is important for a good adaptation. Many authors produce a ton of works and not all of those are really worth adapting to the big screen -- just look at the works of Stephen KingRising to fame with the release of his first book, Carrie, Stephen King is one of the most prolific, and most successful, American authors (in any genre, not just horror). for numerous examples of big budget adaptations that failed. Not every story from an author needs to be adapted, but those that are really do need a good hook to make them work as a film or show. Philip K. Dick's works, especially, need a fair bit of massaging since they were written for a certain time (during the height of the Cold War in particular) and with a certain "for the page" sensibility. I doubt any of his stories could ever be adapted, one-to-one, for the screen; major changes should be expected. 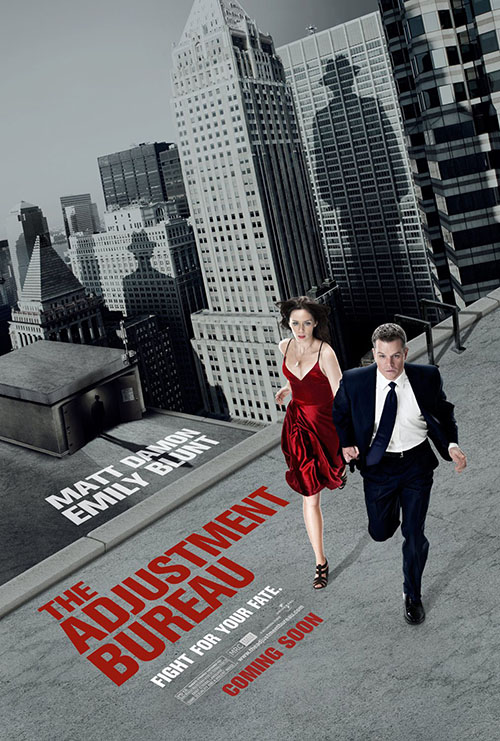 In the case of "Adjustment Team", a whole lot had to be adjusted (pun intended) to get that story into some kind of shape for the big screen. The core idea of the story -- a guy stumbled onto a bunch of people changing little things about the world all to realign the path of "destiny", and those people seem to be working for some kind of "all knowing" overseer -- did make the move into the 2011 film The Adjustment Bureau. Just about everything else was changed, in large part to make this a film that would work better on the Silver Screen. It's a Hollywood blockbuster so it has to have big stars, a bit of action, and a love story all thrown in, along with that Philip K. Dick hook that makes the story stand out. It nails a number of things but I'd argue that once the climax picks up and the film becomes a very Hollywood-style movie, that's when the wheels fall right off the cart.

The movie follows Congressman David Norris of New York (Matt Damon). The Congressman had been running a campaign for the open NY Senate seat, but a picture from his past (where he got into a bar fight and then mooned someone) scuttled his run right on the eve of the election. At his victory part, now farewell finale, Norris has a chance encounter with a saucy girl, Elise (Emily Blunt), and the sparks really do fly. Their moment together gets cut short as she has to bolt, but she inspires Norris to be truer to himself and, during his concession speech he shakes off all the artificiality of the campaign and delivers an honest, real speech to his fans. They eat it up and suddenly his political star is on the rise for a potential run for another Senate seat three years later.

The only thing is he can't stop thinking about Elise. He assumes he'd never see her again, but a chance encounter on a bus (an encounter that certain shadowy figures tried, and failed, to prevent) leads to them, time and again, bumping into each other. The shadowy figures of the Adjustment Bureau (led by John Slattery's Richardson) eventually have to pull the Congressman aside and explain things to him: stick to his path and give up on Elise and he'll be a Senator, even President eventually, while Elise will be a world-famous dancer. But if he pursues her, it's be ruination for both of them. And for years he tries to give her up, but yet another chance encounter makes him think he's found his real path and that the Bureau is wrong. Is he right or is he fighting against fate?

There's a lot to like about The Adjustment Bureau; in fact, I'd say that the first two-thirds of the film work really, really well. It's a love story with a Philip K. Dick "Big Brother is Watching" hook layered on top and that makes it really interesting. It gives the film an edge, a focus for the "will they or won't they" love story between these two characters. Can they be together when people are literally working to keep them apart at every turn? That alone powers the film, but it's not the only thing the movie has going for it. 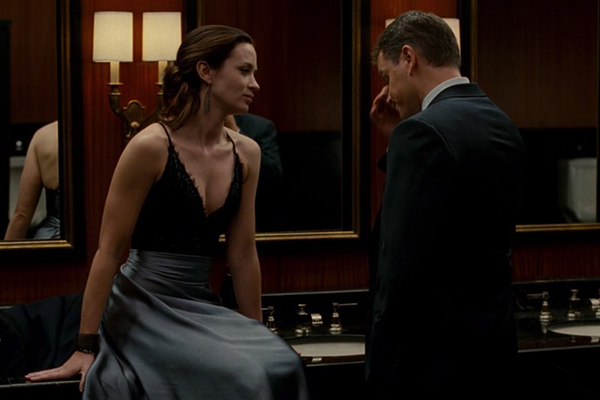 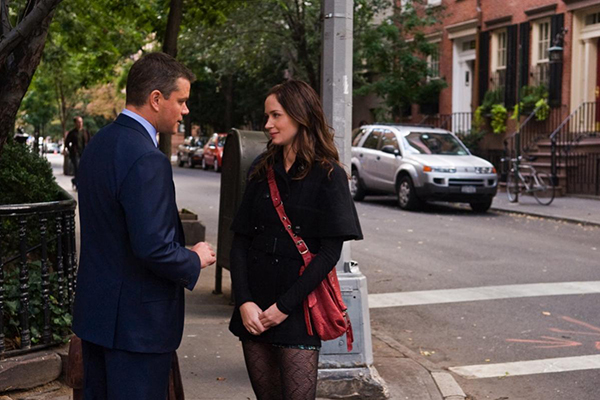 The film also works so well because it has such a strong cast. Say what you will about Matt Damon -- his star has become a little more tarnished in recent years due to his connection to Harvey Weinstein, and some other impolitic things he's done in recent memory -- but I do think he's great in the part of Congressman Norris. Maybe it's because the actor has gotten a little sleazier as the years have worn on, but that really suits the character of a career politician. He works at being fake for the crowds, but Damon also manages to find a realness to his character when he's around Elise. We're supposed to believe that she can bring a truthful edge out of him, something no one else can see, and that does come out in Damon's performance. It's a solid job from the actor.

Of course, it helps that he's working with Blunt who is one of the great actresses of this generation. She has style, and grace, and class, and she carries all of that without even having to turn it on; it's natural charisma like so few have, and when she's in a scene she becomes the absolute focus on it. The movie is told from David's perspective, but Elise absolutely becomes the center of his world and we believe it just be being around her. The actress elevates Damon's performance and the chemistry, and sparks, between them are absolutely palpable. She completely makes this movie watchable for two-thirds of the runtime.

The issue with the film really comes down to the climax. Eventually Damon's character is pushed to chase after Elise, to make a decision between following his path and following his heart, and he chooses his heat. It's a character move, of course, we were expecting. But then the last act is absolutely rushed trying to get him back to Elise, to have him explain what's really going on (re: the Bureau) and why he keeps flaking out on her, and then it pushes both of them on the run without enough time, explanation, or emotion to really sell it. Not that the actors don't try, it just doesn't work. We go from Elise not seeing David in years to suddenly she's back in love with her despite some shitty things he did (at the behest of the Bureau) and it's all too neat and tidy for characters that should be very messy. I just didn't buy it.

The action sequence also doesn't really work in the context of the rest of the film. It's a very jumbled, action-oriented chase sequence in a film that, up until then, had basically been a dramedy with just a little bit of science-fantasy sprinkled on top. It's not only tonally dissonant from the rest of the film, but it also doesn't really add much of anything to the film. Essentially they run around a bunch until the whole matter is resolved not by their actions (not really) but by factors outside their control. In a way they could have had the same resolution just sitting in a bathroom for three hours until the matter passed, without an action sequence needed at all. But this is a Hollywood blockbuster so it had to have a climactic chase on top of its already mandated love story. 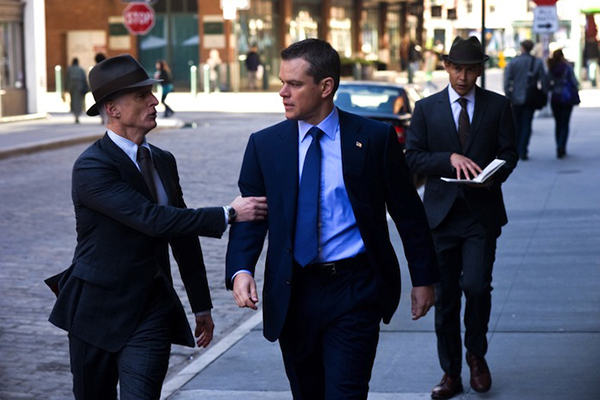 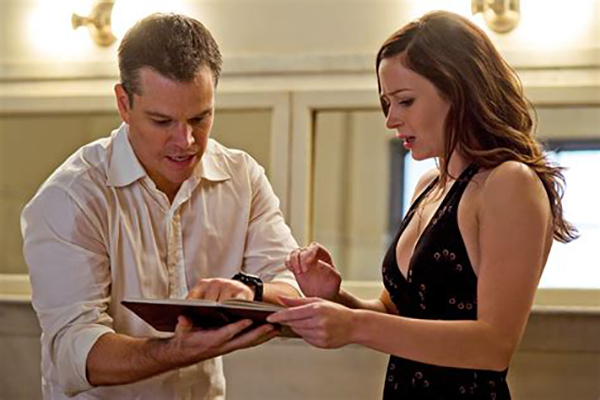 The thing is that I think the love story itself really does work. It crackles any time the two leads get to share the screen together. And this is the rare love story that lets the leads actually slowly fall for each other; most romances have the leads meet on a fateful weekend and then, but Monday morning, they're planning their wedding and picking out china patterns. Here, though, the leads are kept apart for weeks, months, and occasionally years, meaning that their connection has time to grow, only to flourish when they finally come together. I like that, and I think for much of the film it works really well. Where this falls down for me is that David hurts Elise pretty badly when they have their last split, and there isn't enough time put in on the last leg (when they finally get to be together) to head that rift and let Elise naturally let go of her hurt feelings. David knows why he did it, we know why he did it, but the explanation to Elise isn't good enough, nor does she get enough time to process.

And that's all down to that last act being so rushed. This is a film that feels like it was shoved up against a Hollywood template and the last act was hammered in to conform instead of continuing the organic growth of the story. "We have to have these beats here," the formula dictates, and that's where the movie struggles. The Adjustment Bureau is two thirds of a great film followed by one act that is much weaker than everything that came before. Whether that last act ruins the whole movie for you or not depends on how swept up in the tale you get; I really enjoyed the film the first time I watched it but going back now, for a second dive, I have to admit that ending is just flawed enough it didn't really sit right with me. I like everything the film did up to a point, I just wish it could have nailed the ending.