As we covered just a little while ago, I'm a big fan of the original Total Recall. It's a movie that's very much of its moment, loosely adapting a Philip K. Dick story, "We Can Remember it For You Wholesale", through the lens of 1990s action and Paul Verhoeven production style. It works because it blends all of that into a very singular, and enjoyable, vision, and it still holds up today. You'd think that a remake of that film wouldn't be needed since the original still stands up so well. 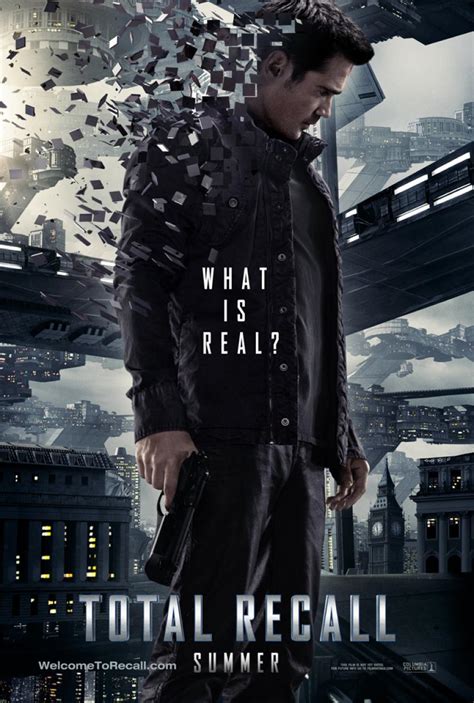 Doug Quaid this time is played by Colin Farrell (who turned in a fantastic performance the previous year in the Fright Night remake but feels a little more on auto-pilot here). Like in the original movie, Doug is a blue collar worker, toiling each day while he wishes for a new life (or at least the memories of them). He works in the United Federation of Britain (UFB) but lives in the Colony (down in Australia), traveling between the two territories via "the Fall", a high-speed connector that goes straight through the Earth's core. Travel between these two territories is necessary as they're the only two places left on Earth that are inhabitable -- everything was ruin in a massive chemical war. A terrorist group of freedom fighters battles the leader of the UFB, Cohaagen (Bryan Cranston), the dictator of the UFB. Meanwhile life in the Colony gets worse and worse as the rich UFB eats up all the resources.

Looking for a chance to make his life better (even in memories), Quaid heads to Recall, a back-alley memory outfit. He goes for the process, looking to become a "secret agent" on a vacation of the mind. But before the process can even begin agents from the UFB and attack Recall, nearly killing Quaid. This puts him on the run, not only from the agents but also from his wife, Lori (Kate Beckinsale), who, it turns out, was a UFB agent all along. It seems that Quaid isn't really Quaid but is, instead, Carl Hauser and he had his memory wiped by the UFB so they could use him for... some reason. Whatever the case it'll take Melina (Jessica Biel), a resistance agent, to help Quaid and get him on his way to saving the Colony and stopping the evil of the UFB once and for all.

Before we can get into the review I do have to note that we're going off the theatrical version of the film, which is also the version currently available for streaming. I have seen the Director's Cut which changes a number of things (while also adding in 12 minutes of footage) and that version is more cohesive with a better ending that's truer to the source material (that is, the 1990 film). However, that isn't the version of the movie most people are going to watch at this point so it seemed only fair to stick to the version Paramount put out in theaters and, wow, does this film suck. 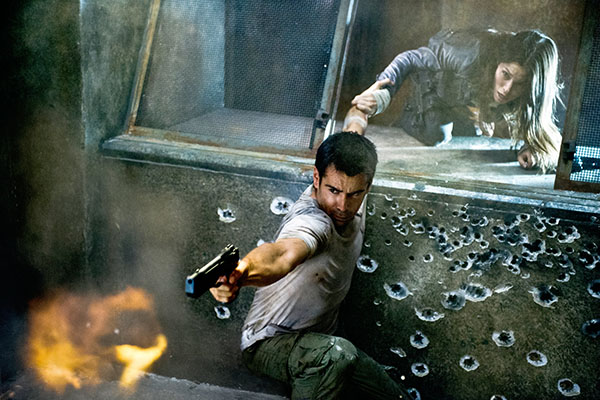 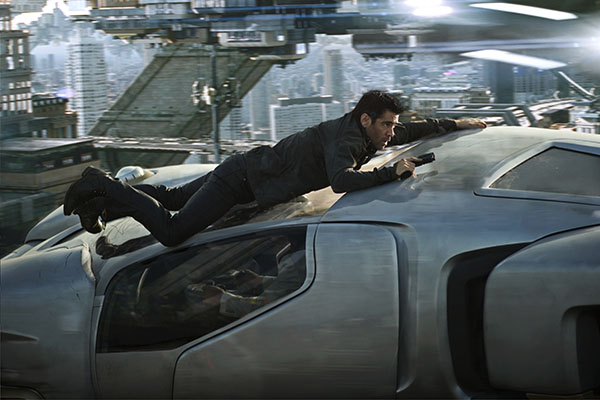 Before we can even get into the plot of the film we have to look at the setting, which is ridiculous. I can buy that some kind of war (chemical or nuclear or whatever) could wipe away a bunch of humanity. The likelihood of just two territories surviving, and managing to stave off the chemicals (or fall out, or whatever) permanently is silly. Worse, the way the two territories are connected is patently ridiculous -- the core of the Earth is solid iron and there's absolutely no way you could travel "through it", or even the molten area around it, let alone do it safely. This is the primary point of the film, that this machine exists and functions as the link for the whole economy. If it had appeared after Doug went in the chair I'd buy it as a flight of fancy, but since it appears at the start of the film, and is the main setting for much of the movie, it just doesn't make sense. The Fall is ridiculous.

Assuming you can get past that (which I tried as hard as I could to do), the film itself is competent at best. Directed by Len Wiseman (of the Underworld series of films), this movie shows the same eye for action, and plot development, as in Wiseman's other works. By that I mean this is a shoddily directed film where the action is barely comprehensible, which is a perfect fit for the also barely comprehensible story. Sure, some of that blame might fall on the studio tweaking the film with post-shoot retooling, but that doesn't change the fact that this film feels perfectly of a piece with Wiseman's other, barely comprehensible work.

Wiseman's style of directing prioritizes frenetic feel over solid action. Thus we'll get sequences of action where a single punch takes three cuts, where a fight is spread across fifteen seconds and 25 shots. it would be bad enough on its own but when you compare it to the 1990 version of the film, with its solid action sequences (again, Arnold was his own special effect and he handled his part well) it's like night and day. This film wants to be a solid action film first and it fails on that front because none of the action has any impact. It's style without substance, using quick editing (and a lot of CGI) to cover for the director's own failings.

Without action we then have to pay attention to the plot which, as note above, it pretty silly. Breezing past the issues I had with the Fall, the story itself is a basic retread of the original movie. Quaid goes to Recall, agents come for him, he runs, meets Melina, runs again, someone tries to convince him he's still at Recall, he runs again, and then the world is saved from the evil of Cohaagen. It just doesn't work as well here because the mystery that grounded the film and made it interesting isn't here. Why? Because Doug never gets the procedure at Recall. Before they can even really get the process going the whole thing is interrupted. Doug doesn't go under and, despite one passing attempt to convince him otherwise, Doug never doubts his reality for a single second. 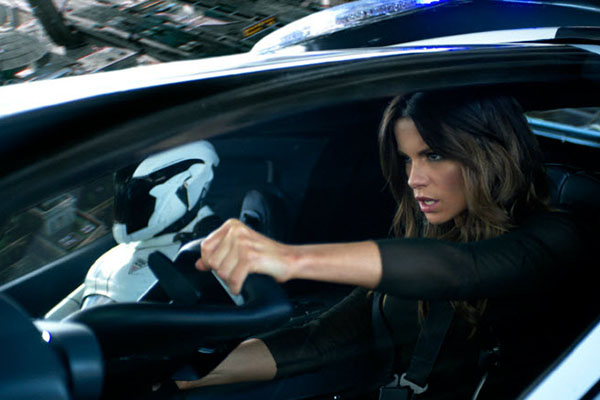 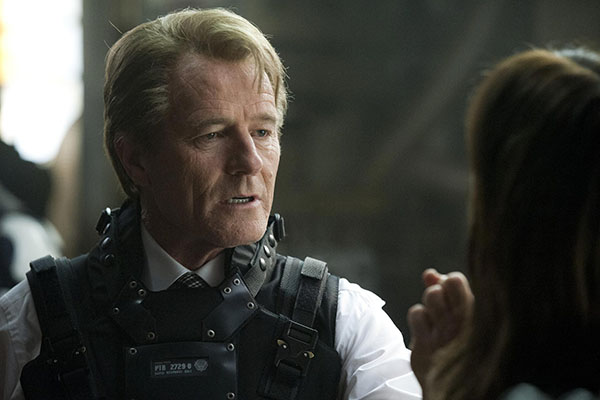 Sure, the Director's Cut plays this differently, and that's cool. The theatrical cut, though, ruins everything that made the original film interesting. Frankly, I don't even understand why they shifted it from Mars back to Earth; if they wanted to just retread the original film, as they do here, they could have kept it on Mars and at least then the retread of the story would have made more sense. Instead, the film keeps all the plot elements (which I assume they had to as this is a remake of the original film and not a reinterpretation of the Dick story for copyright reasons) without the dynamic hook of the original film. Substituting stupid tech for a (by comparison) realistic look at colonizing Mars simply doesn't play.

That's likely why it feels like every actor in this film is sleepwalking their way through. There are a lot of great names here, from Farrell to Cranston, Bokeem Woodbine, Bill Nighy, John Cho, and none of them really seem to care (or do all that much, for that matter). The best actor, and the one that delivers the one good performance here, is Ethan Hawke and he's not even in the theatrical cut of the film. He plays the original Hauser (before his mind is wiped and his face is changed, details that are scrapped in the theatrical cut) and he delivers a truly solid performance as the double-agent. But for the rest of it, the actors are as sleepy as the film itself.

And that leaves me back wondering what the point was. If the Director's Cut had been originally released in theaters then maybe I could see an argument for why a remake of the film would work. We're past a Cold War mentality so this movie going all in on chemical war and a "two sides, one good and one bad" mentality doesn't really make sense, but there are elements of the Director's Cut that at least show someone thought about how a proper remake could work. By and large, though, this film just fails in every way. It doesn't just fail as a remake of Total Recall, though; as a movie in its own right the theatrical cut is a straight up bad movie.