Ben Affleck got a fair bit of shit back in the day for the movies he'd make. As Kevin Smith said in one of his Evening with Kevin Smith specials, Affleck famously had a "one for the art, one for the money" approach to doing films. He'd do an auteur-driven production (such as Shakespeare in Love or Boiler Room) and then follow it with a big, crowd-pleasing Hollywood film that got him a fat paycheck (such as Armageddon or Pearl Harbor). It's a very mercenary way of looking at the business, but considering that in Hollywood your next salary is based on how much you made on your previous films, it also makes a certain amount of business sense. 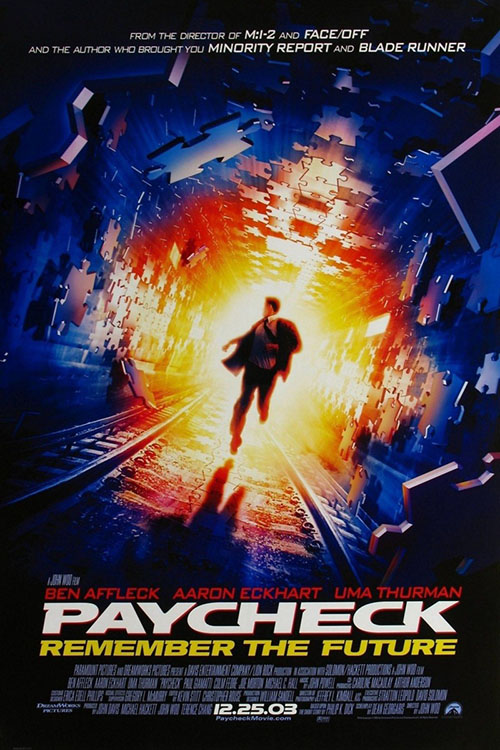 From the perspective of his career, Paycheck is certainly, yes, a paycheck film (Kevin smith called it "an aptly named movie"), and it came on the heels of Gigli, one of the worst bombs in Hollywood history, as well as the less than beloved Daredevil. I think, for the actor, any film would have seemed like a good career move after those two cinematic disasters. While Paycheck isn't a very good film, it is watchable in its own dorky way, and it does seem so much better when you compare it to the likes of those previous films. Affleck might have been hoping Gigli was his "artistic" film that would have given him credibility he could spend on a paycheck film like this, but this movie ends up being an attempt at a bit of a career resurrection. It doesn't do him any favors, but it's also not bad enough to tank his career either.

What's interesting is that I can kind of see the logic of how this film was made. It's based on a Philip K. Dick story, "Paycheck", tapped an actor in Affleck who'd made a ton of action films during that era, and then brought in an action movie director, John Woo, to shepherd the film through with his specific vision. It's the same formula used to create Total Recall 12 years earlier and that film had been a smashing success. Paycheck was decidedly less of a success.

The films concept does hew pretty closely to the Dick story of the same name. Affleck plays Michael Jennings, a brilliant "reverse engineer" who can look at any piece of existing tech and devise his own reverse engineered version of it. He would do this work for companies, getting hired in to create their own versions of existing kit as an independent contractor and then having his mind wiped of the specific details of the job (by his friend Shorty, played by Paul Giamatti), thus giving the company perfectly plausible deniability about the shitty thing they just did. "Of course we invented this all on our own, dodging all patent claims. Why do you ask?"

After finishing one job where he took a consumer-grade 3D display and reinvented it for a new client, getting a fat paycheck but losing two months of his life after the memory wipe, Jennings gets invited to a party by his friend, CEO James Rethrick (Aaron Eckhart). There, James pitches Jennings on a new project, a long, three-year job working on something in "optics". Jennings is sold on the job when he's promised an eight-figure payday. He goes in, comes out three years later, and then discovers that sometime in the middle he gave up his paycheck and sent himself a bag full of items. Confused, and shocked he'd give up all that money. Jennings tries to piece together what happened. And then the FBI comes for him, as do Rethrick's goons. Jennings finds himself on the run, with the only thing keeping him alive this bag of items that, surprisingly, seems to always keep him one step ahead. How could he have known to send these specific items, and just what was Jennings working on that has everyone chasing him now? 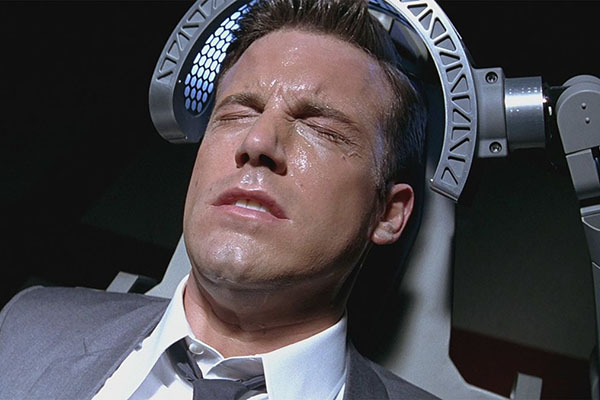 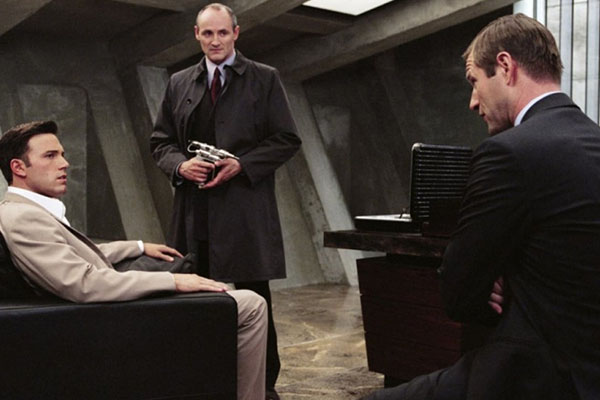 The film (as well as the story it was based on) does have a good hook. The idea that somehow Jennings got a vision of the future and sent himself items before his memory was wiped does work. It plays to the strengths of the character, his ability to work backwards and piece together what he needs from what he has in front of it. It's a cool premise and makes for a solid sci-fi hook. Unfortunately, just about everything else in this film falls pretty darn flat, almost to the point of ruining the movie altogether.

The worst part of the film is, frankly, what I was most excited about: John Woo as director. Woo made some absolutely amazing, cheese-ball action films in Hong Kong (movies like The Killer and Hard Boiled) before coming over to Hollywood to make his own brand of absolutely bonkers action films here. Some of his films are absolutely magical, like the all out blathering craziness of Face/Off, the delightful stupidity of Broken Arrow, the cheesy excess of Mission: Impossible II. Paycheck, though, was the last film he made in the Hollywood system before going back to Hong Kong. It's also his laziest, by far, lacking all the spark and energy that drove his best works.

For a director absolutely renowned for his action direction, Paycheck is as basic and by-the-numbers as it gets. Missing is all the balletic camera work, the slow-motion choreography of actors, action, and camera, and crazy excess that marked all his great works. This is a pretty bog-standard action flick with hardly any stand-out sequences, and if you didn't know John Woo directed the film you would have been hard pressed to guess what director had his hands on the film. It's workman like, stodgy, and even basic. What it isn't is a proper John Woo film.

Not that the film does itself any favors with its casting, either. The best actor in the set is certainly Paul Giamatti, who's only in a few short scenes but steals every second of screen time he can. He's a great second banana here and I wish he'd had a bigger part... or, realistically, had been given the lead role of the nebbish reverse-engineer as this feels like a role perfectly written for him. Instead the nerdy guy is played by Hollywood handsome man Affleck. The actor has charm and style, sure, but you never believe him as a scientist or an engineer. He always seems shocked whenever anything works and he lacks the assured quality that makes you think he's plotted everything out in advance and knows what he's doing. An engineer he is not. 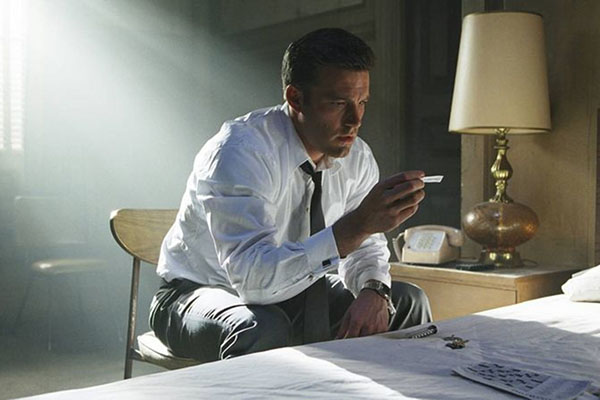 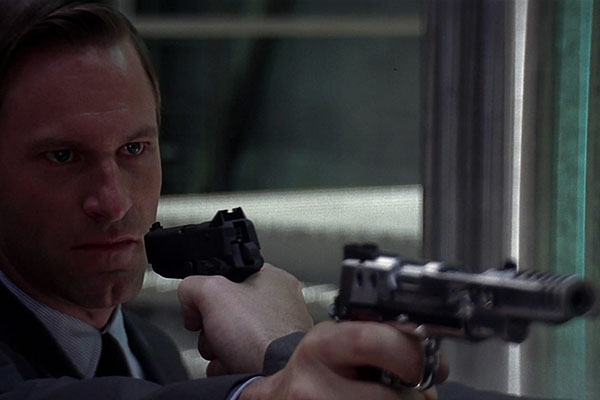 His lead actress, Uma Thurman, isn't much better, mind you. She, too, seems lost in this film, as she supposedly plays biologist Dr. Rachel Porter. In the same way that Affleck can't really pull off a dorky engineer Thurman really doesn't sell her role as a biologist at all well. Both of them just play themselves, astoundingly attractive people that supposedly spend all day in labs not working on their tans or working out for eight hours a day (like the actors themselves had to). When it comes to looking good, these people got it, but as far as playing the actual characters as assigned it hardly works at all.

The film, meanwhile, waffles between incredibly smart and astoundingly stupid. Earl in the movie Jennings is hired to make that 3D display, he does it by going into a lab at the company and then, working on their huge 3D, touch-based display, creates a much smaller one. Like... the company already had 3D tech. Why did they need Jennings? The bag of tricks he sends himself is well thought-out and it does feel impressive each time he figures out an item and makes it work, but then he does really stupid crap at the same time. He uses a key card to getting back into the building to look at his device, then uses an allen wrench and a half-dollar to short out the key-card system so no one can follow him, which is smart. Then he decides he wants to try out the machine, which hasn't worked since he left (because before he had his memory wiped he sabotaged the machine), so he goes and fixes it only for it to immediately and predictably fall into the villain's hands. Stupid. And this happens over and over.

The film is, honestly, frustrating to watch. The concept is so good that it manages to carry the movie a good long way. But as the film wears on, and the early 200s action beats wear the concept down to the Hollywood formula, the film loses all its energy and becomes a bland trudge. As much as I wanted to like this film when I went back and watched it for this review (having not seen it basically when it came out and I thought it was pretty good at the time), I found myself disappointed with how basic and stupid the movie became. Affleck got a lot of crap for the shit movies he made back in the day and with films like this under his belt, honestly, I can see why.