Burn It All Down

The YA boom produced a number of Hollywood films. For a while there nearly every popular (semi-popular, and potentially maybe could be some day popular) YA books series had to be adapted into movie series. If it had teens getting into danger while longingly staring at their (appropriately pretty and carefully hetero) two potential partners, it was bound to be a hit. So much of a hit, in fact, that the last story in the series had to be broken into two chapters. 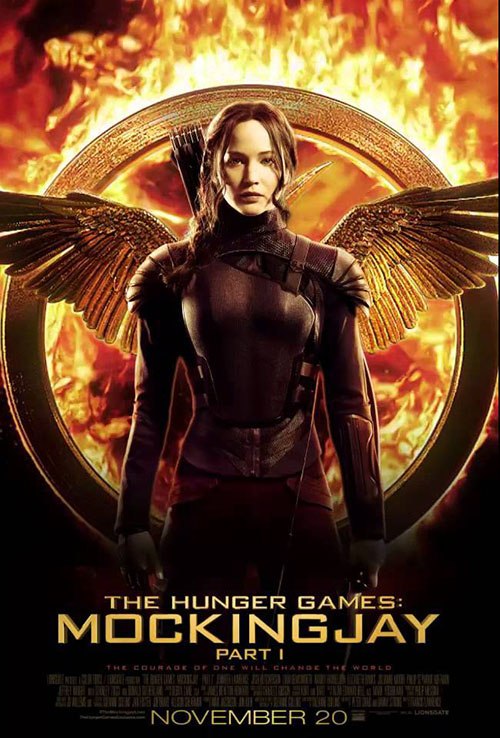 You could this at work with the Harry PotterFirst released as a series of books (starting in the UK before moving worldwide), the Harry Potter series gained great acclaim before even becoming a series of successful movies. Now encompassing books, films, a prequel series, and a successful two-part play, the series even now shows no end in sight. films (Harry Potter and the Deathly Hallows Part 1 and Part 2) and Twilight (Breaking Dawn Part 1 and Part 2), and now we have it again here with the The Hunger Games with the last book, Mocking Jay, broken into two parts. It's a weird compromise to make -- greedily trying to take a story that was a single contained story and splitting it into two as a way to milk more money -- but it does allow this final story a chance to breathe and really establish its new order for the characters and the world.

One could debate whether this kind of compromise really works. I do enjoy the fact that we get a longer and more involved story on the last chapter of series. At the same time, though, there's no easy split point in the original novel -- yes, you can take a point in the book and say, "here's the end of a chapter, just end the story here," but you end up with a movie that feels even less complete than even the second entry in the "trilogy", Catching Fire. The story has no satisfying conclusion, it just hangs there, waiting for the next part to come along and give us the sort of finale this tale needs.

As with the previous film, Mockingjay, Part 1 picks up immediately after the events of Catching Fire. Katniss had been picked up by the resistance and brought to their secret base hidden underneath the ruins of District 13. This is where former game master and now current overseer of the Resistance's propaganda, Plutarch Heavensbee (Philip Seymour Hoffman), plots with President Alma Coin (Julianne Moore) on the next steps the Resistance will take. It's not just a war of soldiers (most of whom will come from the various districts as they throw off the yoke of oppression) but a war of inspiration. They have to get the people on their side, to show that the Resistance is the future and Snow's administration is the past. They need to make a movement.

That's where Katniss (Jennifer Lawrence) comes in. Due to her actions in the two games she was in, Katniss has become a symbol for the resistance, the "Mockingjay" that leads the people forward. Katniss, though, is an uneasy spokesperson, bad at seeming genuine when she tries. She's better in the heat of the moment, fighting on the front line and letting her anger out. It's only when she doesn't think that she becomes the symbol that's needed, so Katniss goes out into the Districts and starts fighting for her people, becoming the leader of the Resistance so the people will rise up and fight against Snow. They just need to keep pushing (into the next movie) to maybe create the avalanche that topples Snow (Donald Sutherland). 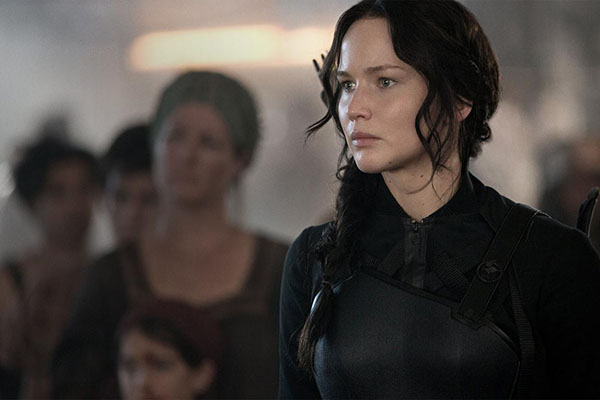 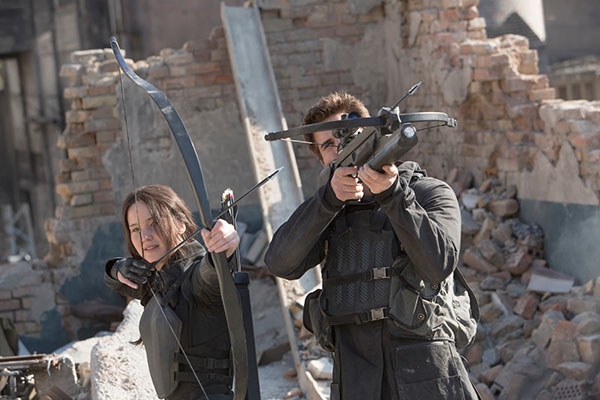 In some ways, and this is to the credit of the film (and, presumably, the novel before it that I haven't read), this film manages to avoid retreading the material from the previous films once again. Both of those stories, of course, were focused on the Hunger Games, getting Katniss in and forcing her to compete for her life. There's no games here, no forced arena battles for Katniss to bounce from. Here, the action set pieces come organically as Katniss goes out and fights the good fight on the front line It's a different dynamic and it helps to keep the film fresh and different.

That said, at the same time there's still a parallel here to the previous movies that shows a continuation of themes. The first two films trotted Katniss out as a symbol, a fighter for her district or a victor giving speeches about the greatness of the Snow administration. She's still stuck in that role, this time just doing it in opposition to Snow instead of for his administration. Yes, she volunteers for the role, but then she volunteered for it back in the first film so, no matter what she does, she keeps getting caught in the same cycle, over and over again.

You even get the vibe that Coin, the self-proclaimed president of the resistance, is knowingly and purposefully using Katniss in the same way that Snow was. I don't think it's any mistake that the film sets the resistance in an underground city with all the members of the resistance wearing matching jumpsuits. They're playing on the dystopian fiction that came before (like Logan's Run, 12 Monkeys, and even to an existent Planet of the ApesAlthough originally started with the 1963 novel, La Planete des singes, it's fair to say that the Apes franchise truly began with the 1968 film that kick started the original Fox film series and has helped tto keep these intelligent primates in the public conciousness for years.) with the Resistance taking on the look and feel of the oppressed people in those productions. These are supposed to be the heroes but they look like they've given up one form of oppression for another.

Coin is positioned in opposition to Snow but not as an opposite. She makes her big speeches to the attentive and cheering crowds, but she does it from on high, shout down to her people like any other dictator. She's as removed and above her people as Snow, and with all her talk of "free and fair elections" and "proper justice" you end up wondering just how much she really intends to follow through on all that. Are the districts simply trading one oppressor for another? Is that what the movie is already setting up as the message for the second half? 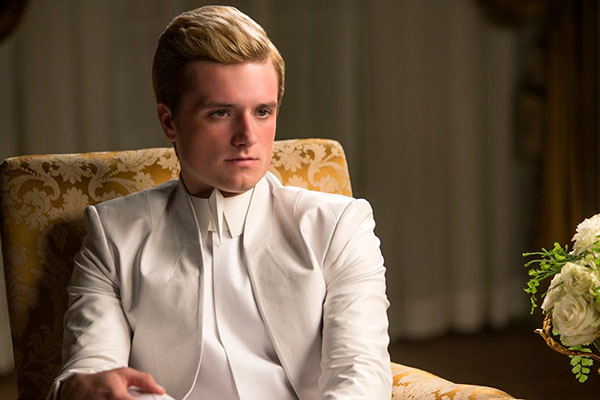 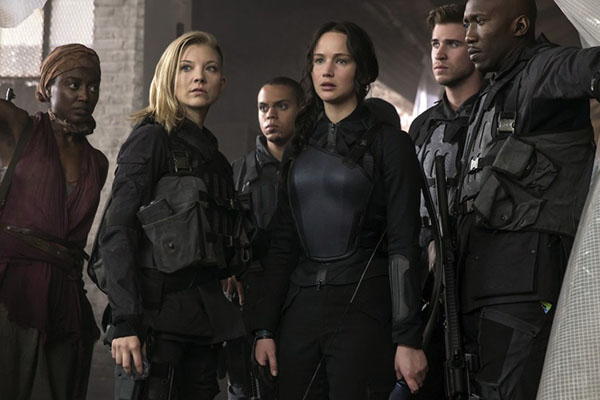 Its in these moments that the film really benefits from the expanded runtime. We get to take moments to analyze the Resistance and its leaders and try to determine just how good, or bad, they really are. This adds nuance to the Coin/Snow dynamic, with Katniss, of course, caught in the middle of it all. It's the same people pushing and pulling at her, telling her who to be and what to do and she never gets to go back to her old life because this is all she's ever going to know again.

And yet, there is one major flaw: the ending. There really isn't one, in point of fact, because the movie ends right in the middle of the novel. We get a big action sequence, a rescue of some vital characters from the second film, and bit of a denouement for the action that just came, but nothing is actually resolved. The story of the Resistance is simply put on pause without any grand victory or resolution for the characters, setting, or story. I complained that Back to the Future leaves the ending of the second film too open, forcing viewers to watch the third film just to get any resolution on anything and it's the same deal here. Yes, that gets butts in seats but it leaves the single film feeling hollow and incomplete.

I liked the world building and enjoyed the new riffs on the material Mockingjay, Part 1 managed to devise, but the ending of the film leaves me empty. Yes, there's one more film and I don't even have to wait a few months to watch it, but if I just want to put a film in, Mockingjay, Part 1 can't stand on its own. It wasn't designed to and its weaker overall because of it. The film only good when it could have bee great, if only it could have had a bit more of an ending that didn't require another film to conclude any of the storylines here.