Take the Fire to the People

And, four movies in, we've already reached the end of the Hunger Games film series. For a while there these films were a phenomenon, must-see watching at movie theaters, anticipated with baited breath by the viewing public. If you want to know why no one talks about these films with the same level of fervor, look no further than this last part, Mockingjay, Part 2, for the reason: it critically fails to stick the landing. 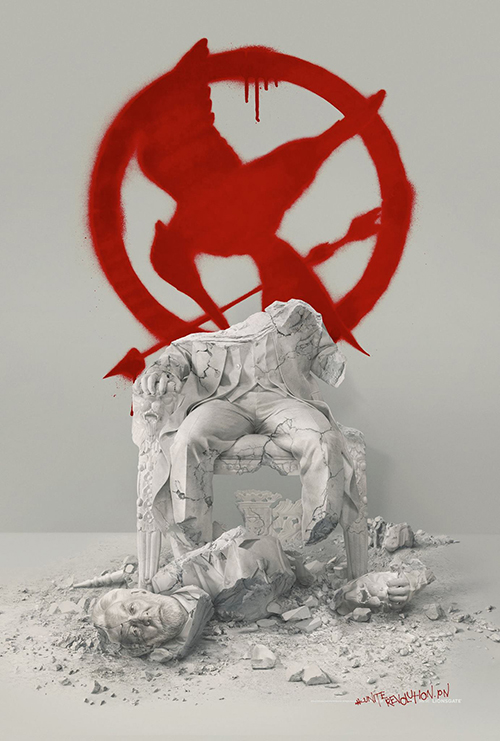 In the previous review for Mockingjay: Part 1 I praised that film for defying the conventions of the series, avoiding the need to do "yet another Hunger Games" and, instead, focusing on characters and world-building to give the series a more lived in, and real, feel. Chuck all that out the window, though, because this is all Hunger Games, all the time, in a movie that essentially is all action with almost no character development at all. This is the opposite kind of film to its first half and, more than anything, shows a clear illustration for why the original novel should not have been split in two.

After seeing Peeta (Josh Hutcherson) rescued at the end of the previous film, whereupon he immediate attack Katniss (Jennifer Lawrence) and tried to strangle her to death (an attempt that was stopped), we pick up with Katniss recovering, her voice raspy and her throat horribly bruised. Apparently Peeta was brainwashed by Snow administration, made to fear Katniss and everything she stood for, to craft him into a sleeper agent to kill her. Plan failed, this just gives Katniss renewed resolve to fight her way into the capitol and kill Snow (Donald Sutherland), ending his reign once and for all.

Against the orders of President Coin (Julianne Moore), Katniss sneaks onto a ship headed for the capitol so she can fight her way towards Snow. She's spotted Gale (Liam Hemsworth), though, and her on-again/off-again beau becomes her ally in the plot to kill Snow. However, she's spotted on cameras and, once again, is made to play the part of Coin's pawn, sent on a propaganda mission (with her media team) to explore the ruins of the Capitol and show the devastation Snows had caused. But when the opportunity strikes, Katniss takes the team in the direction of Snow's compound so she can try and kill him before every single one of her team members are wiped out in the process.

There are a few flaws with this film, but none of them are more glaring than the fact that this movie doesn't really have much to its story. In comparison to the previous film where we saw Katniss slowly building herself, and the Resistance, up, becoming the symbol of the "Mockingjay" so she could inspire and lead the heart and soul of her people, this film is solely focused on a very linear, and not all that inspiring, action through line. Once Katniss makes it to the capitol, it's just a single march across formless ruins to make it to the city center. Any nuance or heart is lost for this endless action dirge. 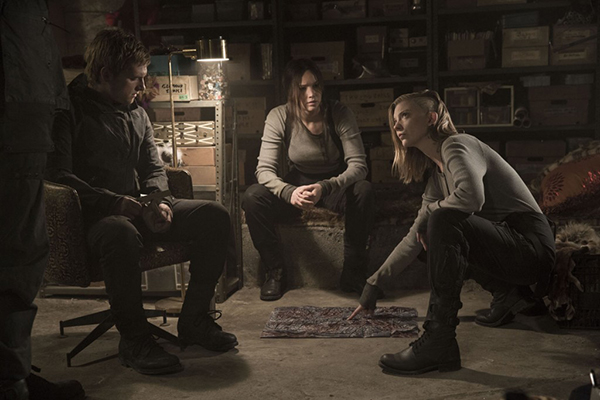 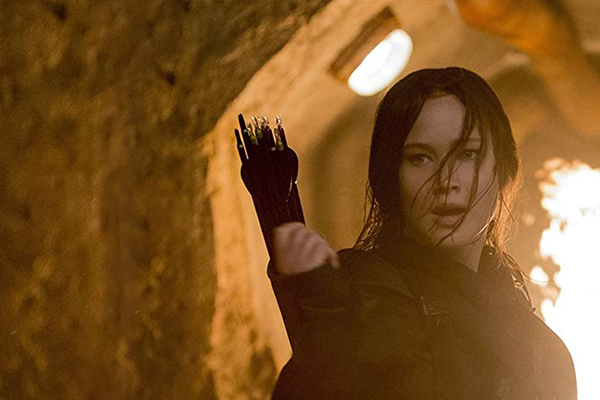 Part of the issue is that we're pulled away from the meaty parts of the story. Seeing Katniss inspire her people, and then watching their actions, was thrilling. We got a better feel for the world, saw new Districts we'd never been to before, and saw the making of a heroine. And while the first act of this film has a bit of that (with Katniss "leading" the troops in District 2), all of that is set aside quickly for the main story in the capitol. All the good bits are lost once the movie makes that shift, and despite all the action the film actually loses energy in the process.

Once we get to the city, the film tells us that the arena's Game Makers have been tasked with filling the city with untold numbers of traps, all of which are designed to kill any Resistance members that get into the city. This essentially renders the crawl across the city into another "Hunger Games" (a fact the film straight out tells us by having a character say, in a very on the nose statement, "welcome to the 76th Hunger Games"). So, essentially, we have yet another retread of the back-half of the first two films, with a band of allies (led by Katniss) slowly working their way through unknown territory while traps attempt to kill them left, right, and center and they're never sure of who (or what) to trust. By this point we've already seen this (twice) before.

The setup also doesn't make any sense when you think about it. We're told that our band of propaganda filmers / freedom fighters are set on the back-line of the action, with all the fighting happening a mile or two ahead of them. If that's the case, and the Resistance is steadily moving inwards towards the city, how can all these traps still exist in their wake? Shouldn't all of them have been set off as the army marched through? Or maybe deactivated, or something? But no, as our band of people march through, the city is still filled to the brim with traps, which just seems unrealistic. Plus, if the capitol is this full of traps, what was Snow's plan if he won the war? It's a minefield now and, as we've seen in real-world wars, mine fields never really go away. Nothing about this setup works in the slightest.

The part that works about this whole setup is Snow watching as Katniss, time and again, manages to avoid the traps, surviving for another round. Over four movies we've seen him go from contempt for her to, but this film, grudging respect and even a bit of admiration. After she's presumed dead in one attack, then shows up again, Snow actually smiles at the footage. He's in awe of her, in a way, and this little moment shows more about their dynamic than all the big actions and loud spectacle ever could. 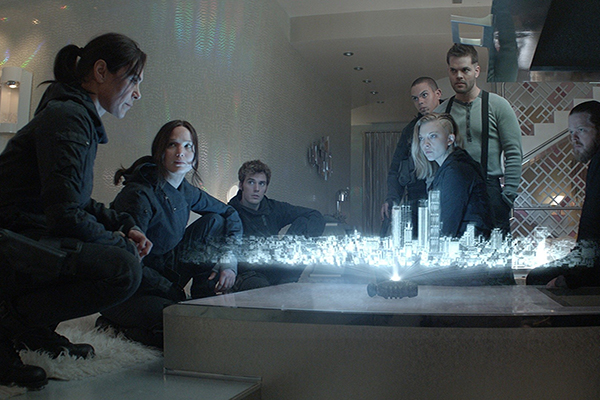 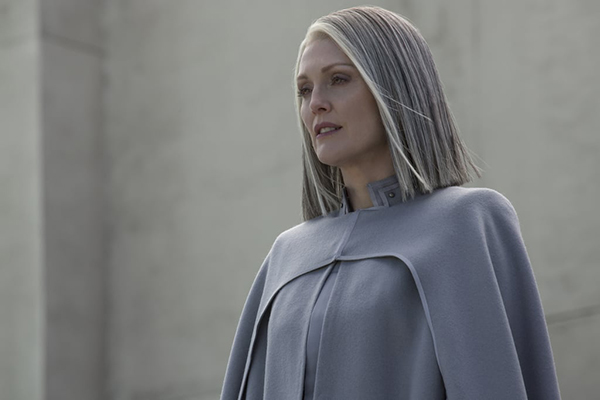 When it comes to the love triangle between Katniss, Peeta, and Gale, it's hard to say this has a really satisfying conclusion by film's end. Peeta, as played by Hutcherson, has never been a charismatic force. Gale is powered by the Hemsworth charms (sure, lesser Hemsworth in the form on Liam, but still charms) and has always seemed like the more interesting love interest for her. Peeta had the edge, though, by actually being an active participant in the games while Gale was always on the sidelines. The only reason there's any doubt about who she'd pick is because of that uneven balance between story and charisma; if Hemsworth where playing Peeta and Hutcherson was Gale, we'd know in a heartbeat who she's choose, instantly.

The setup of this film's love story sees Peeta go from villain to slowly becoming a hero again while Gale is quickly brought down as a freedom fighter without any qualms, willing to kill anyone if he has to. One of the two of them has a character arc while the other becomes the villain. That's not really satisfying in any way, especially since it basically drags down the one character we actually liked for the ho-hum guy that was always just there. When you see the final scenes of Katniss with her chosen guy, even though he's the "good guy" that rebuilt himself for her, you still sitting there going, "him?"

Then there's Coin, the supposed savior of humanity from the tyranny of Snow. As I observed the in the previous film, Coin was subtly positioned not as the opposite of Snow but as just another version of him. This film quickly makes that explicit, showing her doing all the same, nasty things Snow would, just in the name of "freedom". By the end of the film when she's declaring herself the unelected president for "however long it takes" and is readying to announce another Hunger Games, you're hardly shocked. I'm sure this was supposed to seem like a gut-punch betrayal, but Coin never really amounted to much beyond a petty dictation, portrayed as too cool and steely and above everyone to really seem like a better choice than Snow. Hell, in this film, Snow is more likable than Coin, a weird place to be with the ostensible villain of the series.

Really, in all respects, this film is just a mangled mess, and I think it all comes down to the fact that this part of the story was split off from the first half. If the two films were edited together (in a shorter form-factor, of course), then you'd have a steady evolution of characters, and development of themes, and a slow build to the finale. But this film has to be able to stand on its own, have its own arcs, its own stories, and function as its own film, and in that regard Mockingjay, Part 2 utterly fails. It's not engaging in its own right, feeling shallow and empty without any of the resounding, inspiring moments the previous film had. It's a trudge to the ending, an inevitable conclusion right when it needed to be a rousing finale. And, because of that, it drags the rest of the series down with it.