I Hope You Came Hungry

There was a span of a few years where Young Adult novel adaptations were all the rage in Hollywood. It was a one-two punch that really kicked off the whole affair, between the broody vampire love story of Twilight and the dystopian sci-fi of The Hunger Games, both of which, really, built off the proven YA appeal of Harry PotterFirst released as a series of books (starting in the UK before moving worldwide), the Harry Potter series gained great acclaim before even becoming a series of successful movies. Now encompassing books, films, a prequel series, and a successful two-part play, the series even now shows no end in sight.. Between the three, we had all the genre tropes -- fantasy, sci-fi, and horror -- well covered at the cinema. 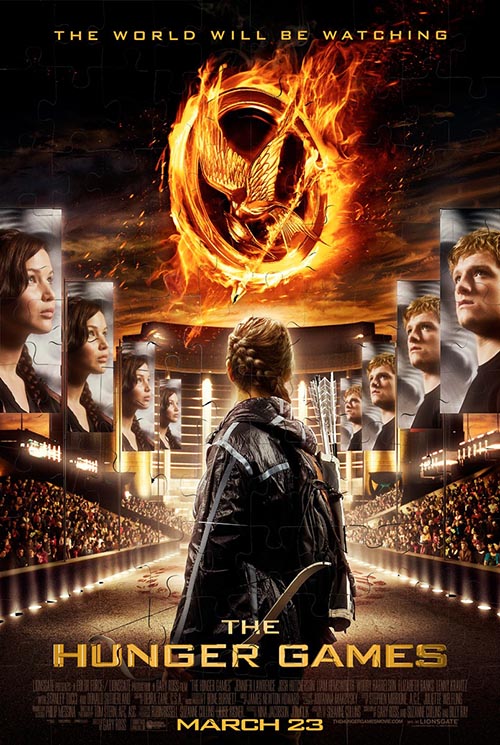 Of the three, I'd argue that The Hunger Games makes the best transition to the big screen, neither hobbled by a direction who felt great fealty to the source material (Harry Potter and the Sorcerer's Stone) nor being based on one of the worst vampire novels ever written. While I don't think the first Hunger Games movie is perfect, it does a solid enough job of showing why this story struck a chord with its readers and illustrated just why the YA genre as a whole could, and should, make the transition to the big screen. Unfortunately this series is also one of the few winners, all told, from the YA boom.

The movie focuses on heroine Katniss Everdeen (Jenifer Lawrence), a girl, living in District 12, who helps care for her mother (Paula Malcomson) and sister Primrose (Willow Shields). Katniss spends her days out in the forest, hunting for food with her bow, doing what she can to provide for her family, a family she'd protect at any cost. This is put to the test at the annual Reaping, the event held each year where one boy and one girl (each between the ages of 12 and 18) are selected (via lottery) to be sent to the Capitol to compete in the annual Hunger Games (now in its 74th iteration). When the lottery starts, Primrose is picked first, forcing Katniss to step up and volunteer instead.

The Hunger Games, as we learn, forces the 24 selected kids (two from each of the twelve districts) to compete in a last-person standing, kill-or-be-killed, winner-takes-all arena fight. The kids will get dropped out into a domed area (a few miles apart) and fight to the death. Katniss, and her fellow District 12 selected Peeta Mellark (Josh Hutcherson), have to find a way to gain advantages, navigate the expectations of the games, and try to be the last alive so one of them (or, hopefully, both) can win the game (since two survivors from the same district can win together). All they have to do is somehow survive everyone else, some of whom have been training their whole lives for the games.

Overall I was impressed by The Hunger Games, via its sense of place, its atmosphere, its acting, and its style. It presents a credible reality that feels just a little more prescient in recent years (as so often happens with good sci-fi). I wouldn't say its the most original vision of the future I've seen -- there are shades of The Running Man and The Long Walk to this tale, both novellas by Stephen King -- but the sense of the world crafted here is strong, detailed enough to carry the story. 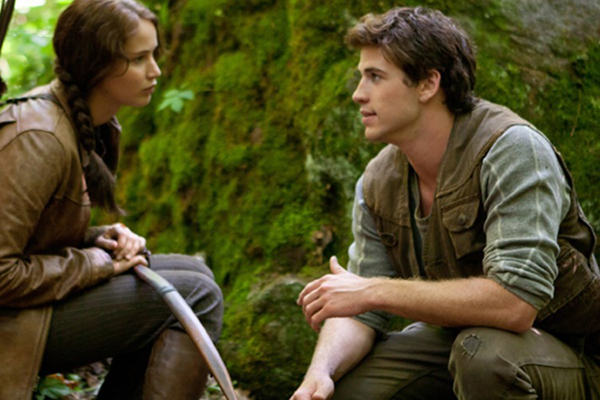 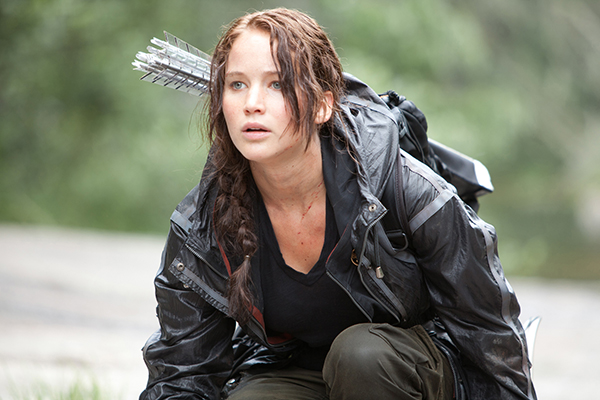 That said, I do think there are some flaws to the presentation of Panem (the world of The Hunger Games), and it's all based on assumptions about what the viewers would know about the film going in. A quick text scroll dictates that the Hunger Games were implemented after a failed revolution that devastated one of the thirteen districts of Panem. These games are meant as a way to control the populace and keep them all under the thumb of the capitol. Not enough in the film is said about this uprising or how a regular set of games actually keeps people under control.

I think, in part, this is due to the fact that we never know the prize for winning the Hunger Games, not in the movie itself. I've watched the film twice now and the story is vague about what Katniss could win should she survive. Is it just a prize for her and her family, or for the whole district? If we understood this better it could show us further motivation for Katniss to win, to become a heroine in our eyes. She could be the hero of an entire district if the prize were, say, an entire years worth of bonus rations for the district, and while I'm sure the book tells us this the movie doesn't.

Additionally, we have no really sense of where Panem exists in our universe. I assume it's a future of humanity (and not, as in the case of Star WarsThe modern blockbuster: it's a concept so commonplace now we don't even think about the fact that before the end of the 1970s, this kind of movie -- huge spectacles, big action, massive budgets -- wasn't really made. That all changed, though, with Star Wars, a series of films that were big on spectacle (and even bigger on profits). A hero's journey set against a sci-fi backdrop, nothing like this series had ever really been done before, and then Hollywood was never the same., people that just look human), but is it Earth or some colony world that's gone full-dystopia? Reading notes about the story after watching the film I find out that this was actually North America after a great and bloody civil war, and that knowledge actually shades my understanding (and revulsion) of this future human society, but it's again a detail missing from the movie.

There's a lot of this, so many details culled from the movie (like a reaping) to make it fit within a specific runtime, but the things cut clearly shade the film in ways a viewer just won't understand without. The world has this presence, this sense of detail, almost lived in, but there's still a gap in understanding that takes the world from being just a concept into something we can understand without having to consult notes. These details that were removed kept me from fully investing in the film because I kept asking questions about why this thing had to be, or where these ideas came from, or what place all of this happens in. 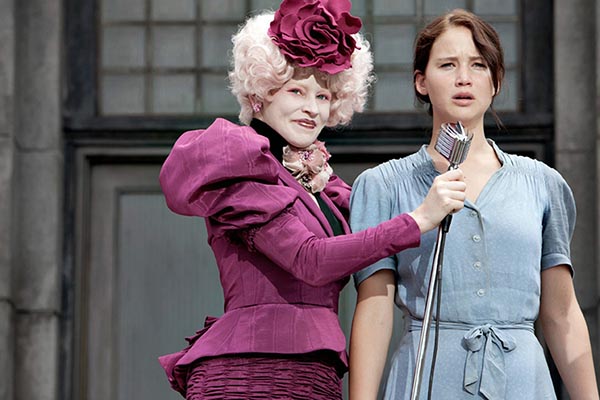 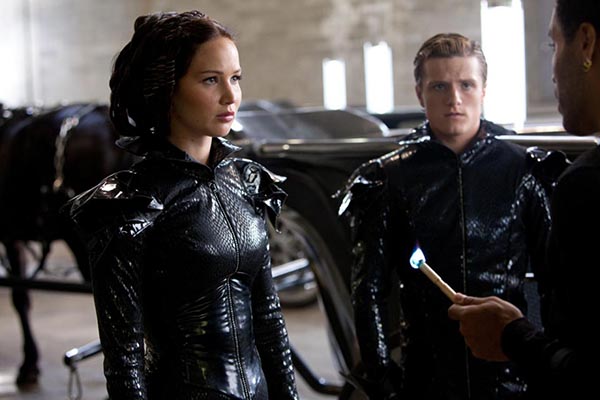 Once the games themselves begin, we do get sucked into the action of it, the thrill of following Katniss around as she survives one attempt on her life after another. Much of this big final act works well, a test of Katniss's character that, for the most part, the film handles with aplomb. Again, though, there are issues I couldn't quite get past, things that kept me from fully investing in the proceedings.

For starters, the filming of the movie is way off in the action sequences. There are plenty of long sequences that let the characters move around and gain a sense of space. But in the action sequences, the film moves to shaky-cam with lots of quick, hard cuts. It's a jumble, really, and at time really hard to watch. Nauseating, really, like you're gonna get motion sick from it. Maybe this was done to minimize the gore and violence, obscuring it so the little kiddies in the audience didn't see anything too awful. But then, these sequences, I have to assume, are detailed in the book, which the little kiddies likely read, so, really, what was the point?

The biggest issue in this section, though, is that Katniss isn't much of a character to watch. This is true of the whole movie, where she's closed off and wooden, but it's especially aggravating during the last act, during the games, when you'd think the adrenaline would lower her barriers and make her emote more. We get one moment, when a girl she befriended dies and Katniss finally cries, and that's it. The rest of the time she's as robotic as RoboCop and it doesn't work for me.

And yet, at the same time, the film does have moments of brilliance. There are sequences that show Katniss's intelligence and determination -- shooting an arrow at a bag of apples to knock them loose and set off mines, a tense fight with a girl from District 2 who wields knives -- that show the right level of action and thought. In these moments the film truly sells the danger of the games, why we should follow Katniss, helping to absorb us into the film. 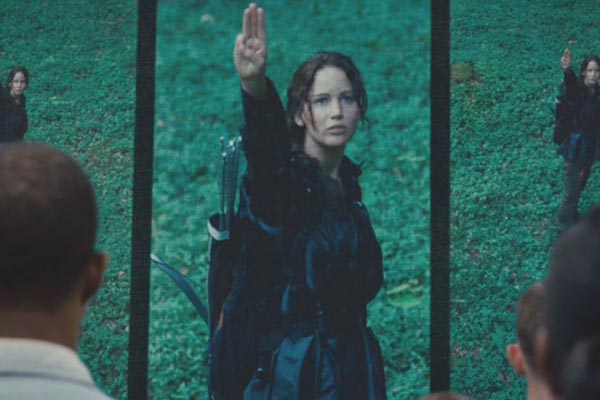 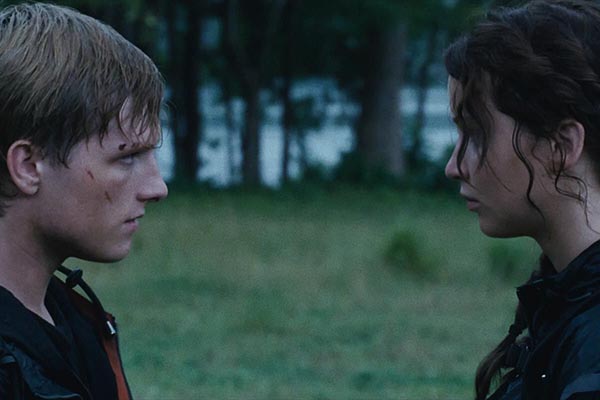 If there's anything I'd really want more from the movie its for the film to illustrate the emotional toll of the games on the characters. Going back to a point I made earlier, in the Stephen King novella The Long Walk (which he wrote under the pseudonym Richard Bachman), the lead character in that story signs up for the titular walk, an event where a bunch of teenage boys go on a long walk, flanked by guards and cheering crowds. You have to maintain pace, not fall behind, and not take breaks. Get three strikes against you and the guards shoot you. Last person alive wins the prize (money and fame), but going through the event, and coming out the other side, is such a harrowing experience it drives the lead character mad.

Now, I'm not saying I want to see Katniss go insane from the games, but it would be nice to get more of the emotional toll from her, to see her break down (more than just the one time) after realizing what she was going through and just how hard survival would be (and the cost to her after the fact). But the girl we see before the event is the girl we see during it, and it's still her after. She went through all this but it doesn't seem to change her at all, and that's just a little weird. You don't send a hero (or heroine) on their journey without the adventure shaping them, but that's how the movie presents it here.

I'm iffy on the movie as a whole, frankly. I think it's a solid action/sci-fi film at times, but there's just enough off about it to keep it from greatness. It's still better than all the other YA fare to come out before, and after, this film, but in comparison to other great sci-fi, The Hunger Games wouldn't survive it's own reaping.