It's the Philosopher's Stone, You Dinks!

I'm the kind of person that likes to pay attention to what's coming out, what's new and strange and interesting. If something is gathering buzz, I'll keep an eye on it. If it seems like something that's right up my alley, I'll go see it (and usually I'll see it whether it has good or bad buzz). It it's something I wasn't instantly interested in (like, say, the sci-fi "Ferngully in Space", Avatar), something that everyone else is automatically interested in, and everyone keeps saying I have to check it out, I'll dig my heels in and resist with all my might. For whatever reason I switch will click in my head and I feel this overwhelming desire to avoid this subject in question at all costs, no matter what. It took me three years to get around to watching Avatar, and that was only after a friend purposefully left the DVD at my house for over a year -- I was moving and I didn't want to move the disc. 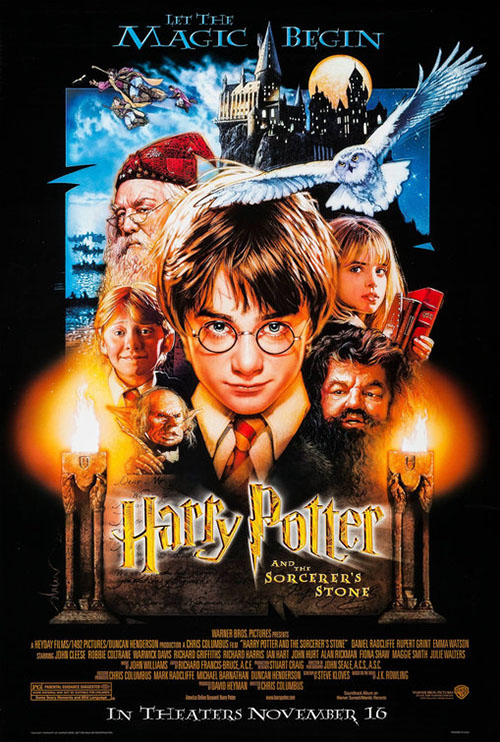 The same kind of thing happened for me and the whole Harry PotterFirst released as a series of books (starting in the UK before moving worldwide), the Harry Potter series gained great acclaim before even becoming a series of successful movies. Now encompassing books, films, a prequel series, and a successful two-part play, the series even now shows no end in sight. series. A kid-lit book about wizards and witched didn't immediately strike me as something I'd care about as (outside of the Discworld series) magical practitioners aren't a fantasy subject I care that much about. Hell, I tend to ignore the whole of the fantasy genre unless it has vampires or other creatures of the night (exchanging glances) in it. But Harry Potter blew up, become this giant, billion dollar business, and everyone (seriously, everyone) I knew was way into the series for a while. So, naturally, I dug in my heels and resisted with all my might.

It was only after the first movie came out in 2001, and a bunch of friends made me sit down and watch the movie, that I actually had anything to do with the series at all. And, really, that first movie was a terrible way to get introduced to the series because, damn, is this movie wretchedly bad. By every metric I can think of, this is a truly terrible movie. Maybe not Suicide Squad bad (which is my current metric for "worst franchise film", beating out Mad Max: Beyond Thunderdome), but it's still pretty darn bad.

Not that the basic concept of the movie is bad, just that it's all in the execution; I rather like the bare bones of the story. Harry Potter (Daniel Radcliffe) is an orphan, the son of two wizards and the only survivor of an attack on the whole family by the evil Voldemort, an evil wizard seeking to take over the world (as ya do). The attack ended poorly for Harry's parents as well as Voldemort, and Harry was left without anyone to tend to him. Shipped off to his extended family (an obnoxious sister on his mother's side, along with her vile husband and son), Harry spends the next ten years not knowing what happened to his parents, emotionally abused by his aunt and uncle while they lavish love on their own son. Things shift, though, when Harry gets his invitation to Hogwarts, the wizarding school. He escapes his vile family and goes to learn how the world really works for those inclined towards magic.

From there the story follows Harry's travails during his first year of school: taking classes, learning magic, discovering how to ride a broom and play the ridiculous sport of Quiddich. Oh, and he works with his two new friends, Ron Weasley (Rupert Grint) and Hermoine Granger (Emma Watson), to thwart a secret evil in the school looking to resurrect Voldemort. Everything in the series always comes back to Voldemort who is looking to regain his power and, one way or another, take over the Wizarding World. 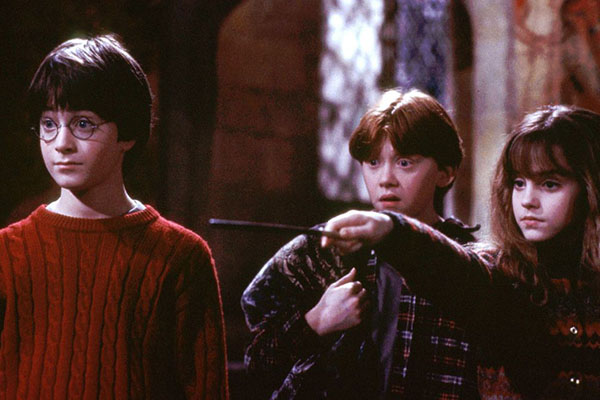 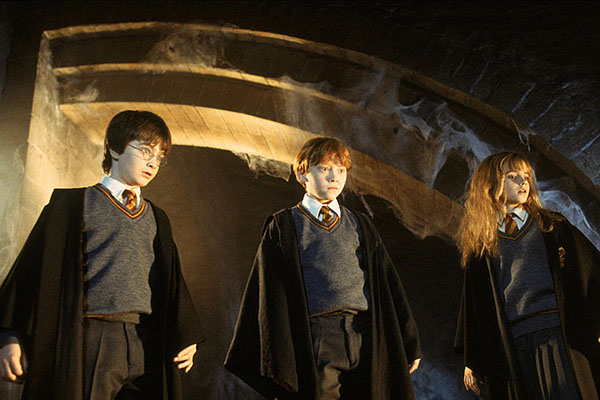 The basic story in the first movie works, a fun little fish-out-of-water idea with enough cool concepts to keep the story moving. If the film were at least half and hour shorter (than it's overly long two-and-a-half), the film would probably feel quite fleet. The problem is that the film feels at all quick or energetic. Scenes drag on, moments are filmed to make them last an eternity, and everything moves at a slow slog of a pace. Just about every scene could easily have many small moments cut, little bits tweaked here or there, to pare everything down without losing any of the important moments. If someone could have just gone through the film in the editing bay and trimmed back all the excess, that would have helped a lot.

Not that it would totally save the movie because there are some deep, structural issues that can't just be solved with a light bit of editing. For starters, the film doesn't have a solid villain for Harry to bounce off of, leaving the film meandering around without a clear goal in mind beyond showing us Harry's first year at Hogwarts. Some films can get by just showing us a day-, month-, or year-in-the-life of a character without any big plot line (such as Slacker, Dazed and Confused, Boyhood, and, wow, most other Richard Linklater films), but Harry Potter is much more concerned with how the titular young wizard is eventually going to face off against Voldemort, and at least in this first film it fails to deliver someone we can root against, to center out focus on and drive Harry forward.

The two "villains" we really have are the nasty little brat Draco Malfoy (Tom Felton), who is just a little jerk the whole movie but isn't connected to any of the Voldemort events, and Professor Severus Snape (Alan Rickman), the potions master and seemingly nasty human. Severus is constantly feinted as the villain, but he's actually not (at least, not in this film, which we'll discuss in later reviews). No, the person actually working behind the scenes is so far in the background of the movie that when they finally make a heel turn and come out as an agent of Voldemort, is basically comes out of nowhere. It has no weight to it because we have no connection to the character, either to love them or hate them. They just exist, on the periphery, which makes for a truly inconsequential villain.

Beyond that, though, we also have the problem that Harry Potter is inconsequential to his own story. Once we get to the school (past the interminable first half hour of the movie), Harry just kind of coasts along, doing things and witnessing events, but he almost never has an active hand in the proceedings. Need someone that cast cast magic and handle the book smarts? Hermoine is your gal. How about a reluctant hero that finds strength within himself to battle the monsters? Well, that's actually Ron. Harry is almost always just off to the side, watching everyone else handle things for him. Even the villain is defeated not through any action Harry takes, or could have even known about, but some mysterious effect on Harry that the headmaster, Dumbledore (Richard Harris) has to explain after the fact. Harry could have stayed home this whole year and, presumably, Hermoine and Ron could have handled everything themselves. That doesn't make for a great hero's arc. 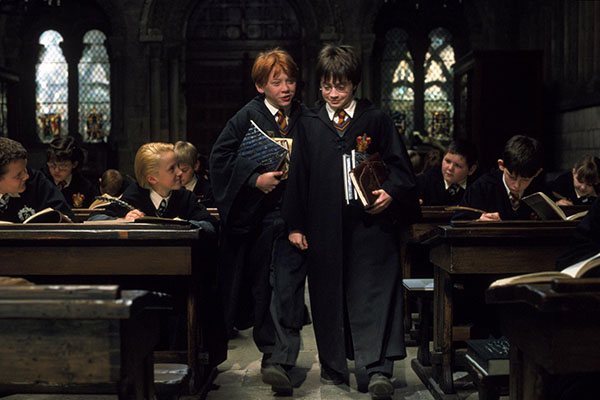 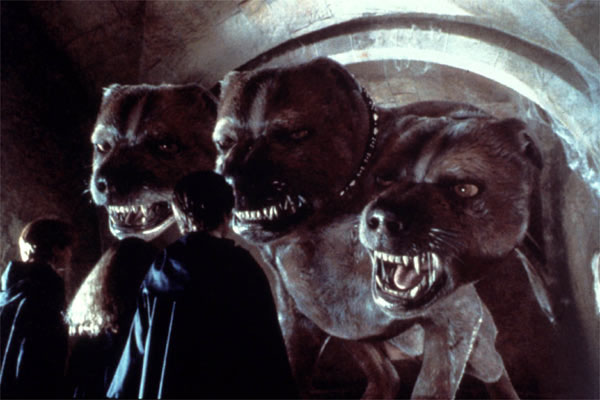 And then you have to couple all this with some truly atrocious CGI. Most of the monsters Harry and Co. fight are obvious computer creations, with plasticy skin and fake looking movements. I get that this movie came out nearly two decades ago, but if the CGI looked this bad, they should have found a way to do many of the creatures with practical effects. Even the scenes involving actual humans still look fake, with noticeable green-screen fuzzing around many figures. It leaves the whole movie feeling empty and unreal. Instead of getting sucked into the movie, we're constantly reminded that everything on screen is fake without a core to anchor it.

The movie essentially betrays all the actors who are all doing really great work in the movie. Everyone, from the kids to the adults, puts in A+ effort, really getting into their characters. As much as I think director Chris Columbus is a hack who never should have been put in charge of a fantasy movie, I will at least give him credit for getting great performances out of all his actors. He was given a wealth of stellar British stars, to be fair, but that doesn't always translate into watchable performances (such as the fantastic cast of the Star Wars prequels all being universally bland). Columbus used his actors well, it's just everything he did around them that sucks.

Harry Potter and the Sorcerer's Stone is a misfire, to be sure. It's a half-baked movie lacking a solid plot to carry the proceedings and the visuals to make what we're seeing interesting. I'm honestly surprised it was a mega-hit that launched a series because, based on this one film, I never watched to go back. I did, because I was forced to by friend, but if it had just been this one movie, on its own, I would have skipped out and never returned. You know, just like Avatar.