About to Drop Some Potion Knowledge

Although the Harry PotterFirst released as a series of books (starting in the UK before moving worldwide), the Harry Potter series gained great acclaim before even becoming a series of successful movies. Now encompassing books, films, a prequel series, and a successful two-part play, the series even now shows no end in sight. movies have been uneven in direction and design from one to the next, it's certainly true that they've been relative good ever since we got past the first two films in the set. Obviously Harry Potter and the Prisoner of Azkahban is the best of the set (clearly I'm right), but by and large they series has cranked out generally good movies ever since. That trend does, happily, continue with the sixth film, Harry Potter and the Half-Blood Prince, a movie that has to set a bunch of new pieces in motion for the grand conclusion coming in the last story (split over two movies). 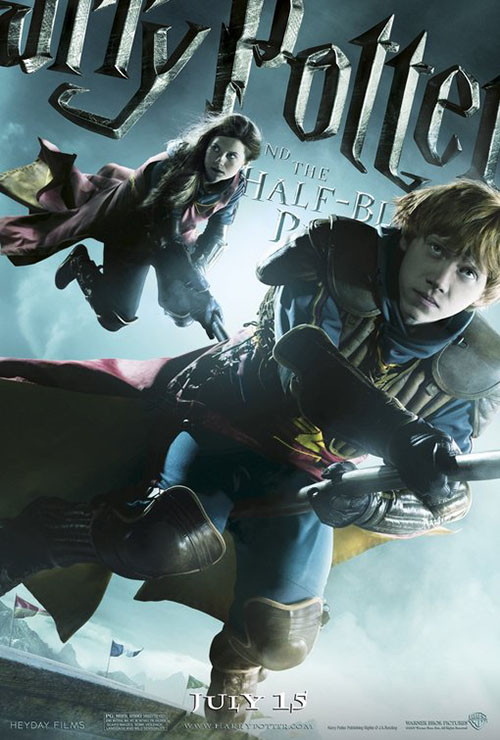 Despite this, Half-Blood Prince doesn't feel like a table-setting film. While there are a lot of new things that have to get introduced in this film, such as the way to finally defeat Voldemort, the film tackles its subjects in a way that it never feels like its just treading water or filling time. This movie is essential to the progress of the series but it covers its materials in a lithe and efficient manner that still, somehow, remains quite fun.

In Harry Potter and the Half-Blood Prince, the Wizarding World is still shaken from the reveal that Voldemort is very much alive once more. Many of the students almost weren't returned to school for fear of what could happen if Voldemort somehow invaded Hogwarts. Still, most of the student body returned to another year of learning... which, honestly, may not have been such a good thing. Harry (Daniel Radcliffe) is pretty sure that his nemesis, Draco Malfoy (Tom Felton), is plotting against Hogwarts headmaster Dumbledore (Michael Gambon), attempting in some way to kill the teacher. Not that anyone else believes Harry; most just think he's angry at Malfoy for being Malfoy (who is a prig). While Harry tries to figure out Malfoy's game, he's also working with Dumbledore on a plan to defeat Voldemort.

As is slowly revealed during the film, Voldemort used very dark magics years before to create horcruxes, magical devices that split and store a piece of a person's soul. If those devices are secreted and remain intact, the person can never truly die. In essence, Voldemort turned himself into a lich (an undead, eternal wizard), using the darkest of magics, ad he did it seven times. Were Harry and Dumbledore to defeat the Dark Lord they would first have to find his seven horcruxes to sever Voldemort's immortality. Dumbledore knows the location of two, but five more remain by movie's end. And that is where we end as we head to the conclusion...

Like the previous films there's a lot of plot line that exists on the periphery -- Harry's love story with (Bonnie Wright) as well as the love story between Harry's best friends, Hermoine (Emma Watson) and Ron (Rupert Grint); Harry's command of the Griffindor quiddich team; and, of course, all the random classes the students barely attend -- but the main plot is focused on and handled with deftness and care. Half-Blood Prince is a very efficient movie, getting through a lot of plot in it's two-and-a-half hour timespan without ever feeling like it drags or plods. Again, ever since the first two movies the films have managed to efficiently focus the storytelling. They have to, honestly, because as the series went on the books got much bigger, with a lot more plot to cover, and if the films had tried to adapt all of that story they wouldn't have blimped to five-plus hour epics (and only the truly faithful would have wanted to sit through all that). 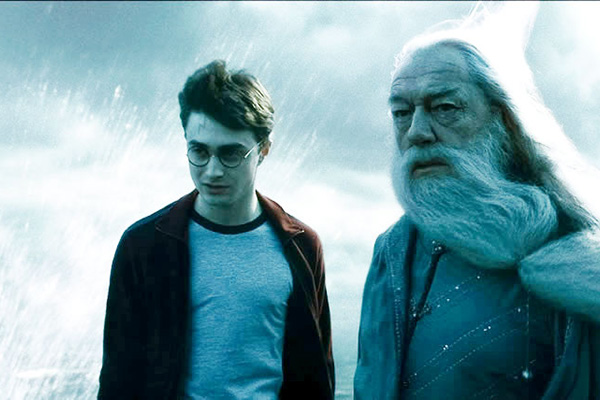 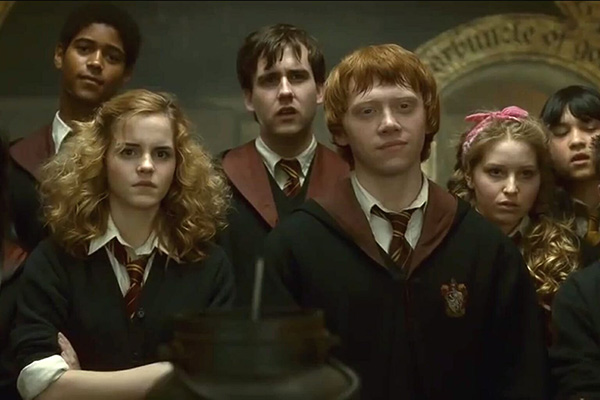 What I liked about this sixth film is that it never felt like essential portions of the story were left on the cutting room floor. The fourth film, Goblet of Fire, suffered because it felt like so much essential plot from the book was cut out to try and cram a huge novel into a short movie length. While I'm sure almost as many side-plots were ditched here, Half-Blood Prince never shows its seams, never feels like core parts of the story are missing or that I have to go back to the source material to get what's really going on. I didn't walk out of this movie asking fundamental questions about how the Wizarding World works which means this film handled it's basic plotting, and world building, properly.

While the story is great, what I enjoyed ever more was the fact that this movie managed to be fun. As the books went along the films got more and more dark. Despite the heavy material handled in this movie, the film still finds time for lightness and fun. The characters are witty, cracking solid jokes and lightening the mood. More importantly, they feel like real characters, with hopes and dreams and desires. They act like people and you ed up caring about what they're going through as they wander the halls, take the piss out of each other, and get into hijinx. Although it doesn't have the same storybook vibe of Harry Potter and the Prisoner of Azkahban, Half-Blood Prince is the first Potter film to really get the tone the third film was going for. It crafts a real movie with real, enjoyable characters.

As noted, this movie is very focused on Voldemort but, as in Order of the Phoenix the Dark Lord himself is not seen in this film. Sure, his agents are everywhere, plotting and scheming in the periphery, but the film gets a lot of mileage out of Voldemort as an idea to dread. That's the thing about Voldemort, he's a villain everyone fears but when you actually seem him in person he's never able to live up to the legend of him. Each time he's appeared in a film he's been laughable, a Bond Villain with magic instead of the all powerful demon lord to fear and dread. For the "ultimate evil" he's always left me wanting, so i can appreciate that Half-Blood Prince keeps Voldemort out of the action, letting mischief makers and dark dealers handle his business.

Besides, Malfoy is a better antagonist for Potter than Voldie has ever been. Malfoy is a little shit, but he's acted so well by Felton, especially in this film. This movie, honestly, is the first time that stories have ever give people a reason to care about Malfoy. He's an evil we can understand, a child forced to pick up his father's mantle and carry on the Dark Lord's bidding despite the fact that he really doesn't want anything to do with it. Malfoy has a compelling storyline here, and Felton handles the performance with aplomb. 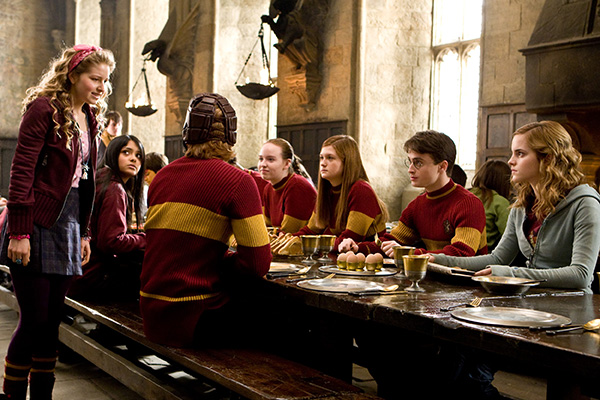 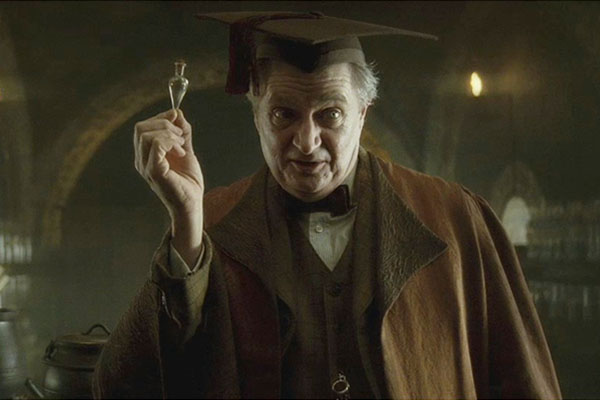 It all comes back to focus. The movie places the weight of the story on the shoulders of three characters -- Harry, Dumbledore, and Malfoy -- and then carries the story through to a natural point of completion. We get a satisfying (if ultimately sad) story that still, at the same time, sets up the events to come in the climactic conclusion. And yet, at the same time, it's able to breathe life into these characters and make them feel like real people. Harry Potter and the Half-Blood Prince is one of the more enjoyable films in the series and it does this despite being the penultimate story in the run, a feat most other series aren't able to achieve.

Now we just have to hope the series is able to keep this up for the last, two-part epic. Harry and friends have one more year to go before the final showdown with Voldemort so let's hope they can keep the energy going for two move films.