I had a number of complaints about the first Hunger Games film. Although it did a good job of presenting the feel of the world, treating the subject matter with all due seriousness, the story was cut and pared and trimmed until it lost a lot of the information, and the nuance, of the original story. What we got was a film that was so streamlined I felt like crucial details of the world were lost. I liked what I saw but wanted more background of the world to help explain how things worked on Panem and why everything functioned the way it did. 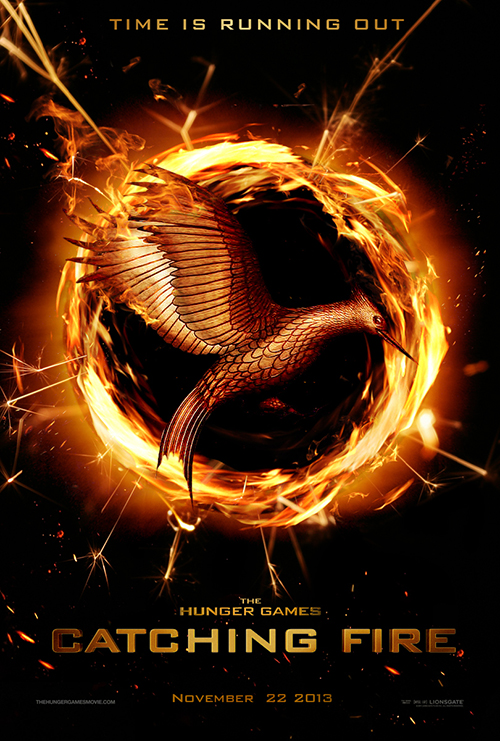 I also, frankly, wanted more from central character Katniss Everdeen. Although well played by actress Jennifer Lawrence, the character was too walled off, too devoid of the necessary details to show the impact her decision to volunteer for the games (to save her sister, Primrose) and the actual participation had on her. A series of events like this should drive her a little mad, or at the very least give her some serious PTSD. And yet the film barely acknowledges any of this at all.

Thankfully the second film, Catching Fire, seems tailor-made to address these issues. It's like the producers said, "now that we have the movie out and it's a success, we can take a time to lay in all the world-building details we had to excise from the first film." We get a better sense of all the districts that make up Panem, get to see how the government keeps these people down through fear and intimidation while using the games as propaganda, while also illustrating just what's on the line for Katniss and fellow victor Peeta (Josh Hutcherson): food for the rest of their lives, but at the cost of basically being "in the system" and under the government's thumb for their rest of their lives as well.

We pick up soon after the end of the previous film, with Katniss and Peeta home after their victory in the games (having force the hand of the government to accept two victors, this despite a last-minute rule change that would have said otherwise). But while they get to be home there's little time for them to enjoy their spoils of victory. They have to go on a "Victory Tour" first, giving speeches and selling the "fact" that the government is great and cares about its people. Failure to do so will result in the deaths of their family, anyone they care about, the deaths of those people's families as well.

The problem is that, try as they might, Katniss and Peeta aren't great at playing the part of happy government toadies. President Snow (Donald Sutherland) knows he has a problem with these two as they're a symbol of defiance, a weak link in his control over the country. Once the Victory Tour ends, the next phase of his plan is put into motion for the 75th year of the Hunger Games: on this, the third quarter-quell, the pool of tributes for the games will be chosen from the ranks of previous victors only. This forces Katniss and Peeta back into the games where, if things go according to Snow's plan, they will die and never be a torn in his side again. That is, if things go to plan... 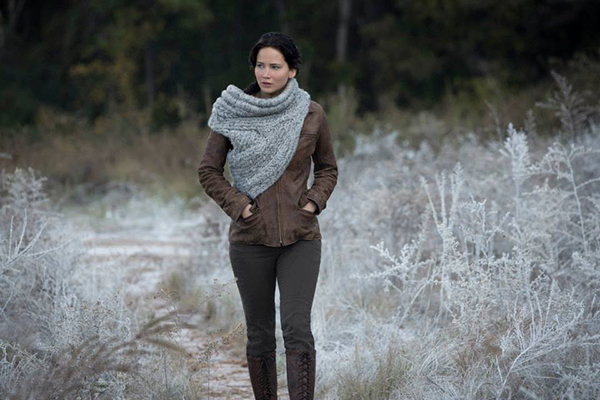 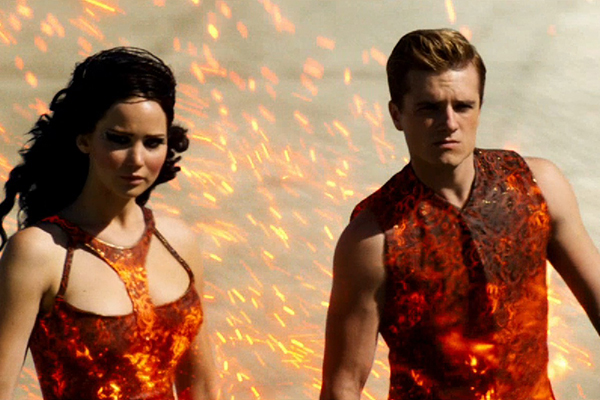 I have to admit that I enjoyed this film much more than the previous one, this despite the fact its an obvious middle movie and has the same "ending that isn't really an ending" flaw so many middle films in a trilogy (or quadrilogy, in this case) have. The setup of the film is stronger, the world feels richer, and everything ties together better to make a film that, start to finish, is much more absorbing and substantive. It's stronger than the film because it has the time, and means, to really flesh out the world and its characters, enhancing the while experience.

For starters, I like Katniss a lot more here, in part because they make her much more vulnerable. She's suffering from PTSD, having never really recovered (or, frankly, escaped) from the trauma of the games. The Victory Tour only stretches that pain out, but once the games start up and she's forced back in again, her grief and anguish are palpable. She was too closed off, to much of a blank in the first film that we never could invest in her or her hero(ine)s journey, but here we see her fall apart and slowly build herself back together, to really grow and evolve as a character. It's an essential hook this time around, one I'm glad the producers realized was needed.

The film also does a much better job of building out Katniss's two potential loves. We didn't see much of Liam Hemsworth's Gale Hawthorne in the first film; he was a pretty guy Katniss saw around a couple of times in her District, but the film didn't give them two characters enough scenes together for him to be a weighty love interest. The intro of this film, though, spends a lot more time with the two of them so you actually see a kind of connect between them. Gale still doesn't get a substantive plot line here, less a B-plot, then a collection of C- or D- scenes, but because of the opening section with him and Katniss we get a much stronger sense of their relationship and the stakes on the line for the two of them.

Meanwhile, Peeta is a third-wheel in a relationship that, from a PR standpoint, is Katniss's primary relationship. As far as the public knows (because of how the first games played out for them), Katniss and Peeta are madly in love, so they have to play the part and act it (going so far as to get engaged). But because she really has stronger feelings for Gale (at least at the start of movie two), Peeta is stuck on the outside wishing he had more. Their relationship shifts and evolves over this film, becoming more than just a show, and this in turn makes Peeta feel like a real person and not just a cardboard cut-out inserted to fulfill the YA-required love triangle trope. 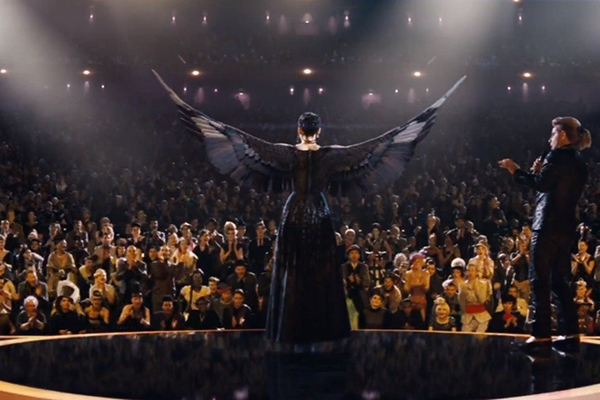 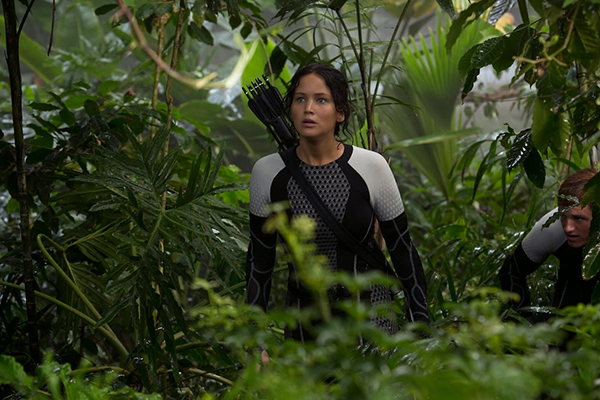 What really cements this film, though, is Donald Sutherland's President Snow. Given more time in this film to glower his way through scenes, more time to act as the repugnant heavy, Snow finally becomes a true villain. The previous film only gave us glimpses of Snow through views from that film's Game Master (Wes Bentley's Seneca Crane). Here, though, he gets to act the villainous part, giving us someone to truly hate and despise, which makes the film very much an "us-vs-them" alignment. It's much easier to cheer for a hero when they have a proper villain to fight (and not just an ephemeral "we're fighting the system, man").

The film does end on a cliffhanger, which is the the one sour-note of the whole shebang. It's the way the book ended, and this clearly marks the story as the middle part of a trilogy (in the books, quadrilogy here as the last story is broken into two halves). We're left to wonder what comes next and how the story will wrap up (as opposed to the first film's ending for Katniss with little hanging over her head). As a single story, Catching Fire is nearly complete, but because of the asterisk at the end, the final scenes setting up the last two films, it doesn't quite end in a satisfying way. There's more to come, and the film doesn't hid that, leaving Catching Fire feeling a tad incomplete.

On the whole, though, it's a greatly improved film over The Hunger Games. Catching Fire addresses so many of the issues I had with the previous film, putting it leaps and bounds over the first film in the series. This is how a sequel is supposed to be, one that takes all the flaws from the previous story and does what is needed to course-correct immediately. If only more films could learn the basic lessons Catching Fire clearly took to heart.