Back to the Future Part III

And already we reach the end of the line for the Back to the Future series. The last film ended on a bigger cliffhanger than even the first film, leaving our hero, Marty (Michael J. Fox) trapped back in 1955 without a resolution as to his plight. Not immediately. Of course, the reason was that Back to the Future Parts II and III were filmed back to back, a planned dual release that saw the films come out about six months apart, so where the first film could end on a tease of a cliffhanger, a "what if" scenario that was fun but didn't necessarily need resolution, the second part was made in anticipation of the third film coming out immediately. No need for resolution when you already have the next movie in the hopper. 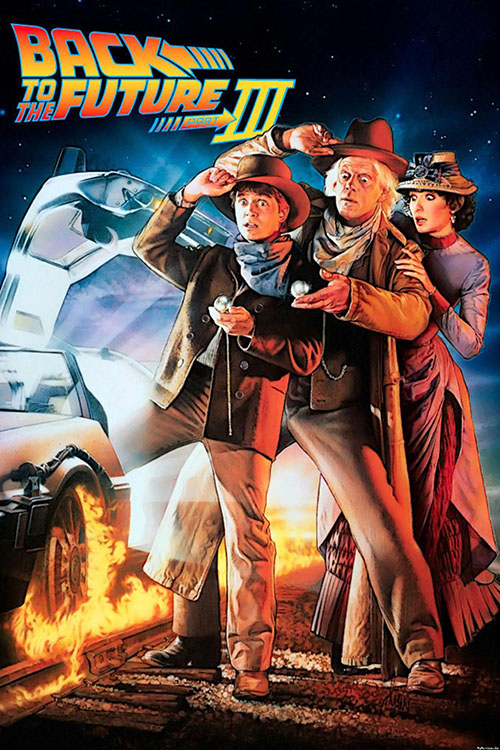 I remember people being angry about this after the second film came out, though. At the time back-to-back films were a novelty, hearkening back to the days of movie serials which were released one week after another. Now, of course, the concept is more common, with such series as The MatrixA speculative future story with superhero and anime influences, The Matrix not only pushed viewers to think about the nature of their own reality but also expanded what filmmakers could do with action sequences and filming. It then launched a series of movies, games, and comics, creating a franchise still talked about today. and the Marvel Cinematic UniverseWhen it first began in 2008 with a little film called Iron Man no one suspected the empire that would follow. Superhero movies in the past, especially those not featuring either Batman or Superman, were usually terrible. And yet, Iron Man would lead to a long series of successful films, launching the most successful cinema brand in history: the Marvel Cinematic Universe. having back-to-back entries. People now know, "hey, there's gonna be a sequel," but that wasn't the reaction back then. They wanted an ending and Part II failed to provide. Sure, it was all to build anticipation, but some people felt let down.

For my money, though, the real letdown in the third film which, honestly, just doesn't live up to the hype. While it's not quite the first film all over again, just this time set in the Old West, it's really not that far off either. Like the second film, Part III is very much in love with the major beats of the original movie, setting up similar scenarios -- McFly entering the local diner/tavern, a chase through the town square, a fight with Biff, and even a cart of manure, among other moments -- are to establishing its connective tissue. These are moment that every fan is used to at this point, like Marty waking up after getting knocked unconscious and talking to his "mother" as she reassures him he's safe when he's anything but -- and while they're fun and amusing once, the film leans far to heavily in just going through the same old motions all over again, much to its detriment.

After Doc (Christopher Lloyd) was sent back to 1885 by the lightning bolt that struck the Delorean in 1955, Marty had to go to 1955's Doc to get help in going home. He had a letter from Doc giving him instructions to head home and destroy the Delorean, letting the elder Doc stay in the past to live his life. But when Marty and Doc '55 find a gravestone for Doc 1885 that indicates he dies days after writing the letter, Marty convinces Doc '55 to help him travel to the past to save the elder version. They fill up the car, fix the Flux Capacitor, and send Marty on another whirlwind adventure through time.

Unfortunately once Marty gets there he gets chased by Natives, tears a hole in the Delorean's fuel line, gets knocked unconscious running from a bear, and then ends up starting a bar fight with Bufford "Mad Dog" Tannen (Thomas F. Wilson playing the older version, of course). Only through the intervention of Doc is Marty saved, but this only delays the inevitable: one of the two of them is going to die by Bufford's gun, so they both need to get out of 1885 fast. Unfortunately they first have to find a way to get the Delorean up to 88 MPH without a working internal combustion engine. Oh, and Doc has fallen in love and they have to decide to do with the new lady in his life, Clara (Mary Steenburgen). It's all going to get very heavy before this adventure is done. 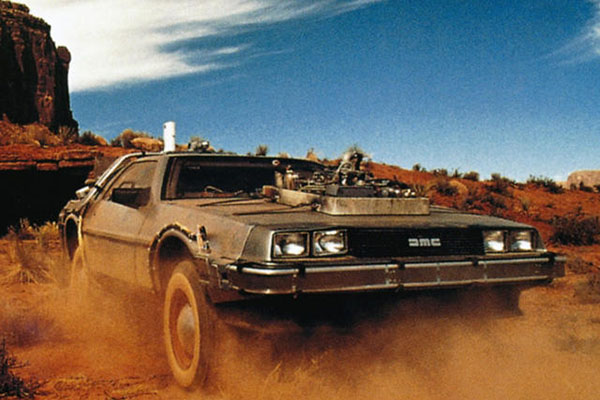 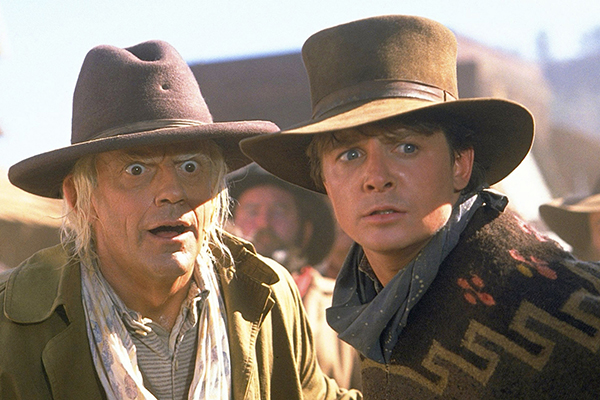 The film does at least deserve some credit for pushing the characters into a different time. Although they'd traveled to 1955 extensive, as well as an alternate 1985 and the future of 2015, 1885 Old West Hill Valley is a new era that does feel like a completely different place. New rules for living, new (old) technology, and new problems to face if they're ever going to solve the issues of time travel. The setting does create new challenges without necessarily feeling like the same old riffs on situations we've seen. In comparison to 2015 in the film, which just felt like 1955 with hoverboards, the Old West has a different energy, a different style.

I just wish the film would have done more with it. We really do get the same scenarios from the previous films redone once again. It's like the writers had a stack of flash cards about the first film and, in writing the second and third movies, simply shuffled them and dealt them out each time, writing a story to connect up around them. Nothing about this film is really "new", despite its setting, not from the early confrontation with Biff/Bufford, to Bufford trying to mack on the lady fare Clara (standing in for Lorainne), to the big experiment at the end to get the Delorean to travel through time. The setting looks different, but it all feels too familiar.

Part of me really wishes we'd gotten new characters to go along with the new setting. I wanted the film to be more daring, to set our heroes up somewhere other than Hill Valley, to try and create a more complex scenario than just another Tannen causing problems for a McFly (by whatever name he's using at the moment). The movies make a lot of hay out of having Marty visit the ancestors (and descendants) of the main cast of characters, but eventually it stops seeming amusing and just becomes a way for the writers to cover for a lack of creativity. I didn't mind it so much when I was 9 and I could just enjoy the cheesy popcorn, but now, years later, I have to admit the whole setup all seems rather thin.

That's not to say that, for a riff on the material that came before, Back to the Future III isn't fun, it's just that it all seems so unnecessary. What do we learn about any of these characters that informs us of who they, or their descendants in 1995s or 1985 or whatever, become? Nothing. A Tannen is a Tannen in any time period, but instead of having Mad Dog learn the error of his ways and making life better for the Tannens and the McFlys down the road, we just see him fall for the same old tricks and end up with his face in a pile of manure. Nothing changes in 1985, for better or worse, because of Marty's actions in 1885. There's no ambition here, not like there was in the first film, that's for sure. 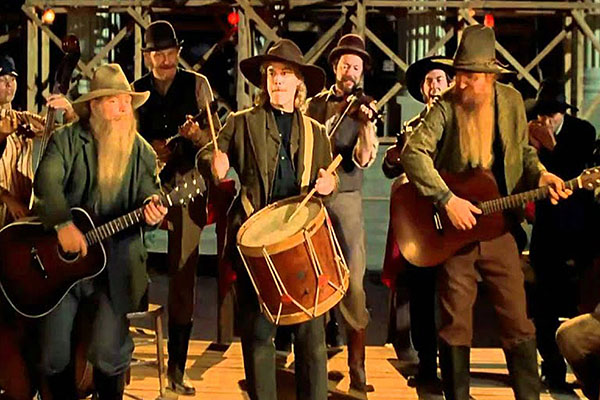 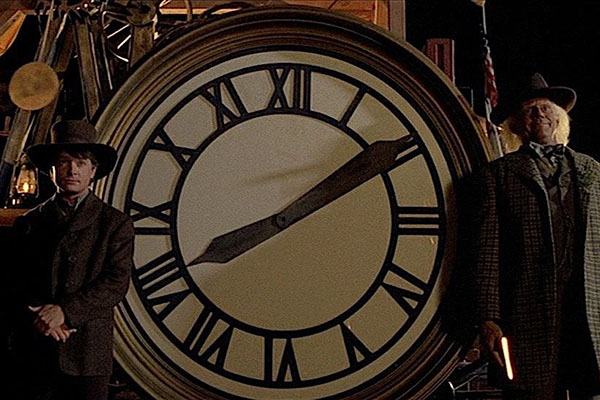 The film struggles to justify its own existence, at least for me. it feels like the writers threw the tag ending in at the end of the first film as a lark, which I'm sure they did, never expecting the film to get a sequel. But then, a couple of years later, Universal came sniffing around hoping for something more and the creative team suddenly had to take that little joke ending and make something out of it that actually worked. So they crafted two sequels that told their own story but barely changed anything about our understanding of the characters, setting, or story of the first film. That movie is precious in the eyes of the authors, so anything that happens has to preserve that movie and everything that happens. Marty can change anything he wants, Biff can much up anything he wants, but at the end of the day Back to the Future has to be preserved and Marty's present of 1985 has to be restored like it was at the end of the first movie.

So what's the point, really? Well, we get to see some hoverboard and then, in this movie, we get to riff on the Old West. I guess that's fun but it lacks substance. And that's the big issue I have, both with this movie and its predecessor, as they both lack substance. They show ambition, and good cinematography, solid editing, and great compositing effects, but beyond the Silver Screen spectacle there's very little here to really sell the film. It's all flash with very little to back it up, making both films weaker when compared to the original. This film is fine as a once and a while watch but it lacks the staying power of the original. For me, it would have been better if Back to the Future had remained a hilarious one-off.