No Need to Get Handsy

I can understand why series creator Rob Thomas wanted to keep the word of Veronica MarsWhen it first debuted on UPN, it's doubtful any suspected that this plucky "girl detective" television series would go on to spawn a movie, novels, and a revival series, keeping it fresh in the minds of fans 15 years (and more) later. going after the release of the movie. It's clear that both he and series lead Kristen Bell have great affection for the characters and the world they've built (Bell has stated she's play this character forever) and they don't want to let the series die, so they'll desperately keep it going any way they can. At the time, writing books in the world probably seemed like the best way to keep it all going -- presumably since the movie didn't set the world on fire there wasn't much hope of making a sequel, and there weren't any rumblings yet of the eventual series revival that came to Hulu. So yeah, at the time books made perfect sense -- the author could continue the stories he wanted to write without worrying about studios, budgets, or actor schedules. 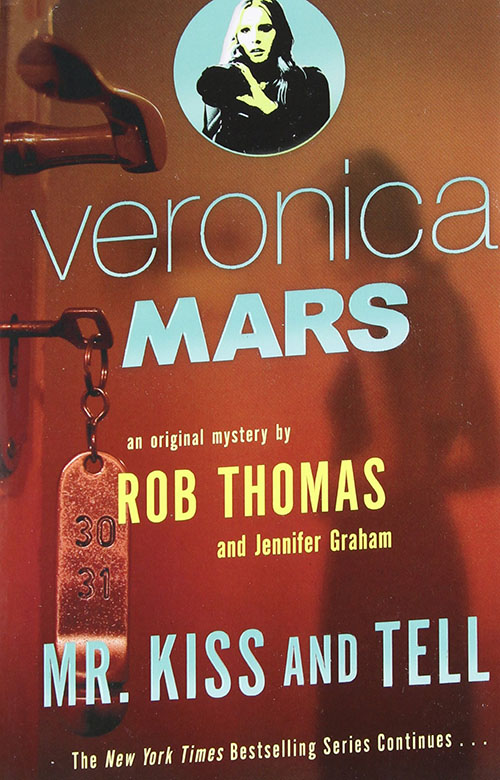 It's unfortunately for the two books that did eventually come out -- The Thousand Dollar Tan Line along with this second novel, Mr. Kiss and Tell -- that the franchise did eventually get picked back up for television. The new season of the show essentially renders these two books as completely inconsequential volumes. Despite the protestations of Thomas that the books are vital, in-continuity entries, there's nothing in these books -- especially not sequel Mr. Kiss and Tell -- that makes them vital reading for any fan of the series.

Mr. Kiss and Tell picks up a few months after the events of The Thousand Dollar Tan Line. Veronica is hired once more by Petra Landros's company due to an incident at their premiere hotel, the Neptune Grand. A young woman had been assaulted and raped there a couple of months earlier, her body somehow snuck out of the building and ditched in a field on the edge of town, left for dead. At the time, when she finally awoke, the girl couldn't remember anything about the night, just this vague memory of being attacked before it all went black. Now, though, she remembers that it was one of the hotel employees, a Mexican in the country illegally and who had just been deported (for other reasons). Now Veronica has to find out what really happened, who was responsible, and if the Neptune Grand (or, really, their insurance) really is on the hook for the incident.

At first blush Mr. Kiss and Tell seems like a classic Veronica Mars story. The series has never shied away from sexual assault stories, both in the fact that the lead character was raped before the original series began (making that a core part of her history that colored her character) and then in the Hearst Rapist story in season three of the show. It's a subject that does need to be covered -- the percentage of women that suffer a sexual assault in their lifetime is staggering -- and while the series hasn't always handled the subject well (usually too heavy handed, which is understandable) it gets props for tackling it regularly. Making the second novel about another serial rapist certainly gets Veronica back to one of her core issues.

The big issue with the story, though, is that for a mystery the book isn't really much of a mystery. Although Veronica is hired to explore the case and just clear the Neptune grand of all wrong doing (if their employee was the rapist), she soon decides to see the case through, regardless of whether or not she was getting paid to do so, and find the killer. But unlike the mystery of who originally raped Veronica back in season one or who the Hearst Rapist was in season three, there really isn't a pool of suspects in the case of "Mr. Kiss and Tell". After quickly clearing out the deported employee from the suspect pool (making him little more than a red herring), Veronica pretty quickly settles on the suspect she thinks is responsible and then follows him through the whole case, never wavering in her belief of suspecting anyone else. That's not a mystery, it's a game of Clue with exactly one "Killer" card.

Unfortunately, because most of the book is told from Veronica's perspective (and she famously has a one track mind focused entirely on her cases), there's very little outside the case of "Mr. Kiss and Tell" to latch onto. The book does have a B-plot revolving around a case brought against the Neptune Sheriff's department by Weevil. Those who have watched the movie will remember that Weevil was framed for an armed assault by the Sheriff's Department, a case that was hanging over his head in the first book. That case is cleared at the start of this novel and then, with Keith Mars's help, Weevil puts together his lawsuit against the city. And then drops it near the end of the book with little explanation. This is actually a key detail in the fourth season of the show, casually tossed off in the series as the characters run into each other.

But that's part of the problem with this novel: storylines like Weevil's case against the city are built up here (and then ended, to be fair) so that when we get to the television show, the characters have to rehash just enough details that anyone who hasn't read the book is up to speed. But without a "previously on" segment detailing the books (which, of course, a show wouldn't do because that's silly) the characters have to talk about the incidents all over again, making the storylines in the novel completely irrelevant.

Worse is the fact that the major case in this story, that of "Mr. Kiss and Tell" has absolutely no bearing on the eventually fourth season to follow (a problem that also plagues Thousand Dollar Tan Line). While the Neptune Grand is shown in the fourth season, Veronica doesn't act as if she's had dealings with the management there (only mentioning that she used to hang out in the place when Logan lived there in a hotel room). No reference is made to this case, or the girl that Veronica helped, Ellie Manning. Heck, Ms. Manning doesn't appear again in fourth season and there's no reason to assume she'll show up in any of the later seasons, either. This is a case that, more than likely, will remain self-contained to the book meaning that if you're a fan of the television show you have little incentive to read the book.

It's also annoying that so much time is spent on Manning's case but very little time is spent with any of the major, recurring characters of the show. Sure, Weevil pops up a few times with his connection to the B-plot, but other regulars get vastly reduced parts. Mac continues her run in this novel of being little more than Veronica's desk jockey and tech expert. She doesn't have any kind of plot of her own and gets very little to do outside the Mars Investigations offices. Worse off is Wallace he gets to show up in all of two scenes and both times he's there solely to help Veronica with something he needs. He's a prop to be used by the book simply because he showed up in the show.

It's really annoying, too, because the point of these books is to tie the past (the original series and movie) with the future (season four and beyond) and yet there's so much between the end of this novel and the fourth season that goes unexplored, almost as if Thomas expected to write more of these novels and, for whatever reason, that never happened. For starters, Wallace is married, with a kid, in the fourth season but there's nary a mention of a woman in his life at all. Veronica's one-time beau Leo D'Amato pops up in this novel, working as a cop in San Diego but, when next we see him, he's an Agent in the FBI, so what happened and how did he get there so quickly? And there's the Sheriff's department which between the end of this book and the start of the next season has because a regular, city-run police force. What caused this, what regulation or law was changed? Nothing is ever explained about this change either.

There's a lot of continuity that changes or evolves between the movie and season four, most of which isn't reflected in either of the two books that come between. It leaves both books as curiosities that don't really have much bearing on the series they're supposed to directly influence. This book in particular suffers because it lacks the continuity connections that would make it feel vital and, in the process, also gives us a case that barely feels like a case at all. Ronnie runs around a lot, sometimes gets into danger, but all we really see her do is follow a linear plot to get a guy she suspects from the 50th page on. It drains the momentum out of the story and then leaves us without anything else to care about.

I respect the decision to continue Veronica Mars in novel form. I can even appreciate the attempts to try and keep the novels relevant with what came later. Sadly too much is missing and not enough is really given to us to make these books feel like vital elements of the story. They're side projects, weird curiosities but nothing more. And Mr. Kiss and Tell isn't even that good a story. I guess we can see why there were only two books in the series -- after two it already felt like the novels had run out of good ideas.

I prefer the feel of books and have never been interested in audio books. I picked up the standard paperback of Mr. Kiss and Tell because I prefer physical novels. While the original novel featured Kristen Bell as the narrator she didn't come back for the sequel. Instead, Rebecca Lowman (who, it seems, mostly just narrates audio books) fills in this time around. Without Bell provided her character's own voice, this audio book feels even more inconsequential to the series than the novel its based on.