A New Seven, the Same Plan

The original The Magnificent Seven is held up as a classic, and exemplary example of the Western form. It had guns, grit, and people fighting for justices. For the right audience I can totally understand why it's so beloved. I, however, was not the right audience for that movie. While I enjoyed it for what it was, I had issues with the films pacing, construction, and general bloodlessness. For a film where so many people die, including half the heroic cast, nothing felt real. Coupled with how long and slow the movie could get in places, it left me feeling bored, not entertained. It could just be my more modern sensibilities. Perhaps the movie (and its sequels) simply hadn't aged well and a fresher take on the material could rouse the story back to culturally-accepted classic status. 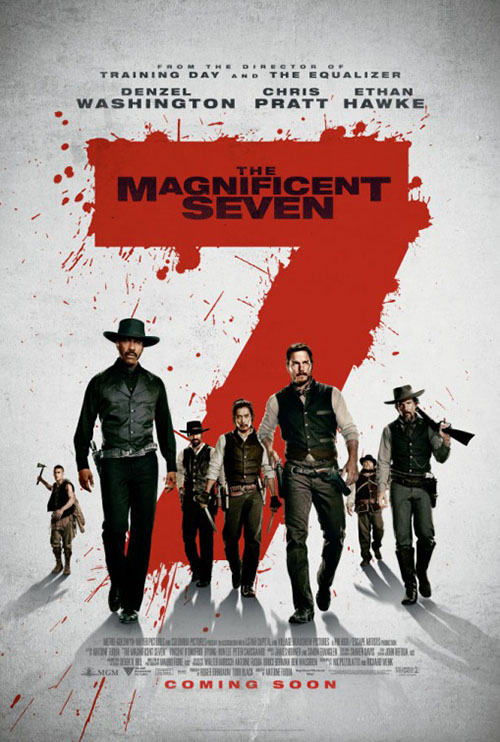 While I'd like to report that the 2016 remake/re-imagining of The Magnificent Seven cements itself as an instant classic, the reality is more complicated than that. There are plenty of great moments in the movie that help to hold it up as a great western in the modern era, it's nowhere near as perfect as it should be to fit within the legacy of The Magnificent Seven. And, really, when you consider how few good westerns have been made in the modern era, even holding it up as one of the betters ones of the form is kind of a backhanded compliment.

In the new Magnificent Seven, a small town is preyed upon by a nasty robber baron. This time the town is a small little mining town on the American frontier, Rose Creek. Due to the gold in the hills, the robber baron, Bartholomew Bogue (Peter Sarsgaard), wants to buy up the town and all the shares of the property the townspeople have. So he agrees to buy their land from them, and by "agree" I mean that he threatens them with violence, kills a bunch of the townsfolk, and then says he'll buy their plots for a paltry twenty bucks a pop. Emma Cullen (Haley Bennett), the widow of one of the men shot during the "negotiations", heads out to find a group of men willing to fight the robber baron and his evil gang. That's how she finds Sam Chisholm (Denzel Washington), duly elected warrant officer and peace officer, a bounty hunter under the authorization of the U.S. Government. She hires Chisholm, and then he gathers six other men so they can fight for the people of the town.

On its face the new Magnificent Seven doesn't really tread that far out from the story of the original (or it's various, same-y sequels). There's still a steely-eyes, do-gooding gunslinger laying out well earned frontier justice. There's still a pack of ruffians with hearts-of-gold who all band together to aid a town. And then there's the town full of people not used to fighting who need these men to protect them. It's a well-worn formula that, over the course of the last week, I've now seen five times. The broad strokes are the same, but it's in the details, for good and ill, that the 2016 remake stands out from what came before.

One thing I really liked about the new movie was its drastically more diverse cast. One thing you can hold against the original is the fact that it (and its sequels) very much buy into the "white savior" trope. Each one (well, except for the fourth film) features a group of (largely) white men going to a small town to save the poor Mexican farmers because they just can't save themselves. This film gives us a band featuring a Mexican gunslinger, a Native American warrior, a Chinese knife expert, and Denzel Washington in the lead. Considering the fact that these guys are coming to aid a predominantly white town, it totally inverts that trope. 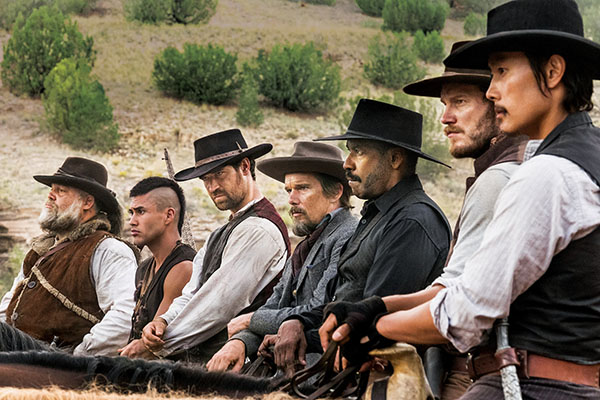 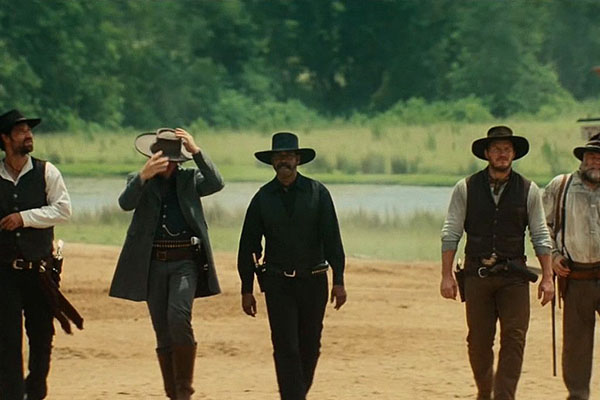 That said, very rarely does the movie handle the issue of race all that well. it does a passing nod towards each character, giving them a moment when the white townsfolk throw shade their way. But then very quickly, the matter is dropped in each case. I get that these guys are coming to save a white town and, if you're in that town, you don't look a gift-horse in the mouth. But the townspeople too easily bend backwards for these guys without, even once, saying how they don't trust any of the guys or won't be bossed around buy someone of color. It's nice that they gave the movie a diverse cast but, considering the era, the film really needed to pay more than just simple lip service to the concept of racism.

Worse is the unintended racism of the film. Specifically, the previous movies (again, except for the fourth) were all made with large, Hispanic casts and crew, which was due to the fact that the films were made south of the border. This film, though, only has the four lead characters of color and then everyone else, in front of and behind the camera, is the usual assemblage of white people. Again, I understand that the economics of movie making has changed from the 1960s, but considering how diverse the original film was in its casting and production, it would have been nice for this film to try to do likewise.

There's also a strong, sexist undertone to the film. While it's able to come up with a diverse cast of men, there's only one woman in a predominant position, and even her character is talked down to by the Seven. She wants to fight but none of them will let her, even after one of their men (Ethan Hawke's sharpshooter) turns tail and runs. She proved herself to be an expert marksman, but even during the finale she's basically relegated to the sidelines, even reduced to a damsel to save at one point. It just fuels that feeling of the movie taking one step forward and two steps back.

I do give credit, though, to the fact that this movie is able to craft better characters out of the leads this time around. Manuel Garcia-Ruffo's Vasquez, Ethan Hawke's Goodnight Robicheaux, Byung-hun Lee's Billy Rocks, and Martin Sensmeier's Red Harvest are all great characters who get solid moments to shine and prove themselves to be total bad-asses. I liked ever second wee got from them and I felt their presence in the movie elevated the material. 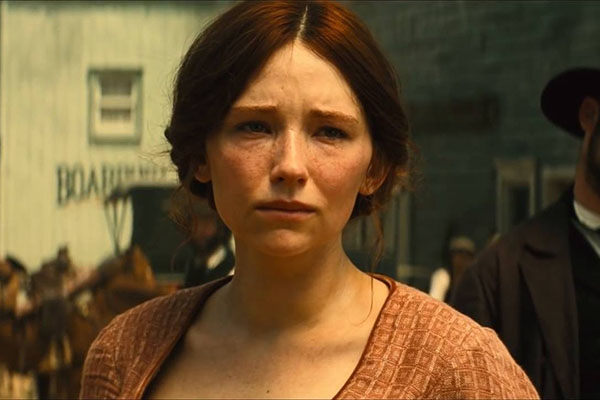 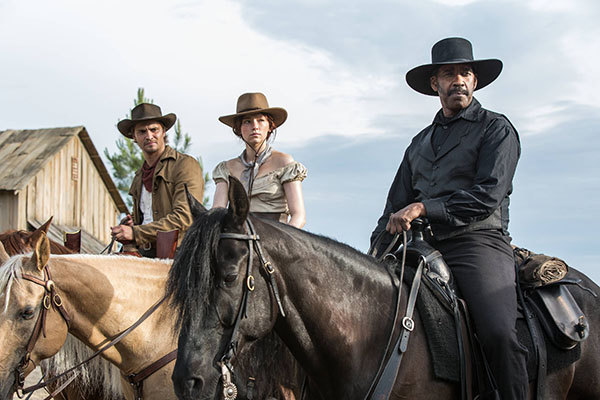 Of course, it's easy to go on and on about Denzel Washington. The Academy Award-winning actor can do this kind of film in his sleep. Here he puts on the same kind of guise that Yul Brynner used in his iconic turn in the lead role, giving us one of the few actors who actually rose to the high bar set by the original actor. Washington instills his Chisholm with cold calculation, cool grit, and fiery anger. It's a strong performance to anchor the movie.

On the flip side there are a couple of actors that I felt really didn't work within the confines of this movie. Chris Pratt's gambler, Joshua Faraday, is a pretty one-note performance, something that happens a lot with Pratt lately. He's basically putting on the same Han Solo-esque smile he used for Guardians of the Galaxy and the Jurassic ParkWhile ever kid has dreams of seeing dinosaurs, Michael Crichton gave that dream a reality, at least on paper. His two Jurassic Park books spawned a movie franchise that's gone five movies strong (with no signs of slowing down), all because people love seeing dinosaurs made flesh. movies, but after seeing him do this shtick for a few movies now, it's getting old. Meanwhile Vincent D'Onofrio is so cartoonishly over-the-top as mountain man Jack Home I never could take him seriously. Worst off, though, is Sarsgaard's Bogue who is beyond scenery-chewing. I've criticized the previous films in the series for having shallow villains, but this film manages to go in the opposite direction to get the same result. He's terrible.

There are enough good moments and great characters to keep you invested and, naturally, it all builds to the big "defend the town" climax. Here the movie does shine as the long action sequence is well films and cleverly plotted. It's a long sequence that never gets boring with plenty of big moments baked in to keep it from getting stale. Even if some of the characters are flat, and you don't really care that much if the villain lives or dies in the end, the film is good enough to keep you entertained. At the end of the viewing, though, you have to wonder if it was all worth it. There's a ton of talent in front of and behind the camera that this film should have been an absolute winner. Instead its just good enough; it's solid, its fun, and its a damn sight better than most of the films in the series. I wouldn't say its better than the original, nor is it worse. They tried to make a new instant classic and had to settle for a par, at best.