We Are the Seven Amigos

When we look at westerns, it's hard to think of a film more famous than The Magnificent Seven. This film released in the 1960s, told a tale that resonated with viewers, spinning a yarn about hired guns, just battles, and evil villains. It doesn't exactly have a deep story, but the tale it tells is one people can understand and appreciate. Sometimes all you need are a few good guys fighting a good fight. 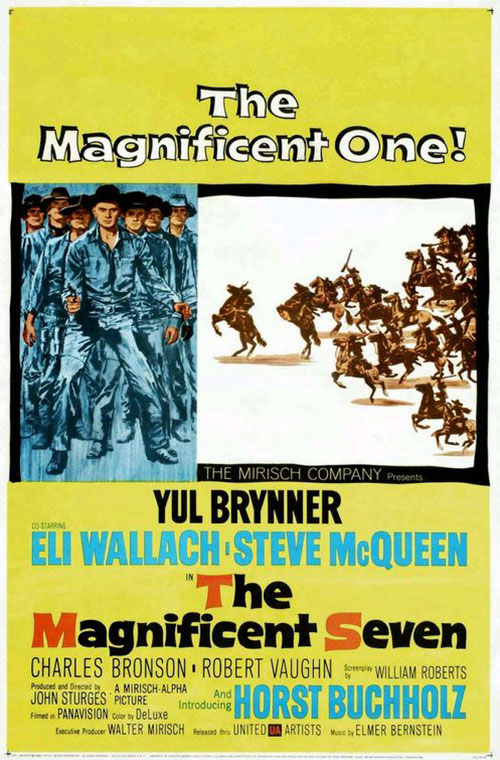 In the movie, a town on the Mexican border is being harassed by an evil gunslinger, Calvera (Eli Wallach). The villain comes to town with his pack of marauders, steals the townspeople's food and supplies, and then rides off to terrorize the land for a time before swinging back through. To stop this endless cycle, three villagers travel north to find anyone that will help them. They end up with a band seven guns-for-hire led by Chris Adams (Yul Brynner), to fight for the villagers and stop the bad guy from once again stealing all their supplies. Now they just have to find a way to even the odds and win the day.

Obviously we've seen this tale before. Villagers in need and reluctant heroes coming to save the day is something that's been done time and again in media. Certainly Magnificent Seven wasn't the first to do it, as it was based on the Akira Kurosawa film The Seven Samurai. Multiple films have come along since, like the The Three Amigos, Battle for the Stars, and Star Wars, all using similar themes to explore their own stories of good over evil. Heck, even The Magnificent Seven has managed to leech its own luster, having multiple sequels, a TV series, and a remake all diluting what made this movie special. Maybe that's why, going back to the movie now, it just didn't have the impact I expected from it.

Don't get me wrong, the movie is good, but it didn't hook me like I would have expected. I had seen the movie before watching it for this site so the story wasn't going to surprise me. I knew what happened (spoilers for a 60 year old movie), that more than have of the "Seven" would die, but that in the end the crew would be successful. Even knowing that, though, it just felt like there wasn't a lot of suspense to the action. Everything felt rather bloodless with an insincerity to the major character deaths. I know I'm spoiled by the movie standards we have now, that when a character gets killed we really feel it for them, with gore and blood and bullet wounds. A movie like this doesn't have that visceral impact, and I certainly can admit that starting this series after watching the John Wick movies probably wasn't the best way to get into the films.

And yet, despite my qualms with the overall film, I have to admit that the film had a number of charms. Of course, the biggest selling point for the movie is Yul Brynner. Here, of course, we have him giving one of his iconic hero performances, a good gunslinger out to save the denizens of the West. His performance is fantastic here, with Brynner being the kind of actor that can say more with a glance than other performers can with pages of dialogue. He commands every scene he's in, drawing the viewer into the story and his turn as the leader of this merry band. Without Brynner, it's hard to say the film would be at all good. 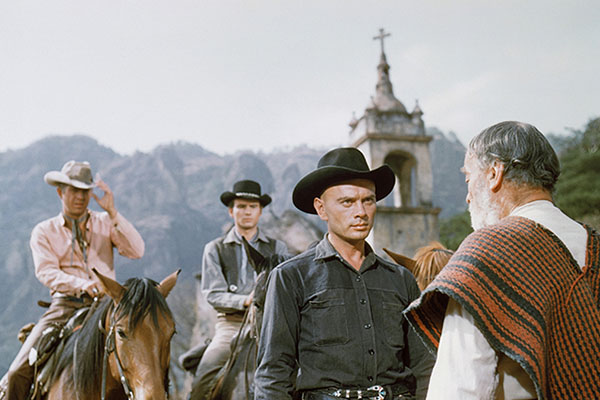 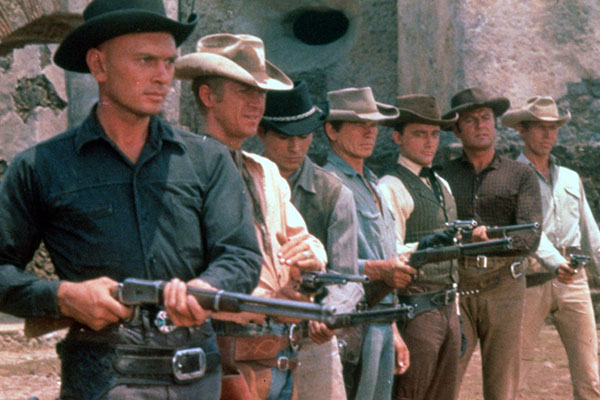 Brynner is, of course, iconic as a good cowboy which is part of what made his turn as the "Man in Black" in Westworld so good. It was a turn that played against type, which made his villainous performance so good. Seeing him in that film, you expect him to be a good guy because these films primed you for it.

Of course Brynner wasn't the only great actor in this film. Steven McQueen also gives a great turn in this film, acting as Adams's right-hand man. While he doesn't have the quiet confidence of Brynner, McQueen has a mirthful spirit to his acting style, making his character fun to watch. McQueen doesn't get as much screen time as Brynner, but he makes the most of his scenes, being fun and funny and a great counterpoint to Brynner's much more serious style.

Really, one of the big issues with the movie is the fact that most of the characters beyond Brynner and McQueen aren't very well fleshed out. We have a guy who's god with knives, a strong guy, a gunslinger who's fleeing from some other people, and a young kid. Honestly, one of them, a fortune seeker, was so uninteresting I forgot he even existed until I looked up the list of characters in the film to write this article. The film says it's a "Magnificent" seven, but only two of them are really interesting.

Hell, one of the character is absolutely obnoxious. Chico (Horst Buckholz) is a young hot-shot, a guy just itching to be a famous gun for hire, but he's just such an annoying character I kept praying for him to die. He didn't. Not once did he even seem like he was in danger, and then he gets to have a happy ending. He doesn't grow or change at all, and he's still just as annoying at the end of the movie as he was at the start. I hated this character so much, and while other, better characters were dying, he skated through. I hated this so much. 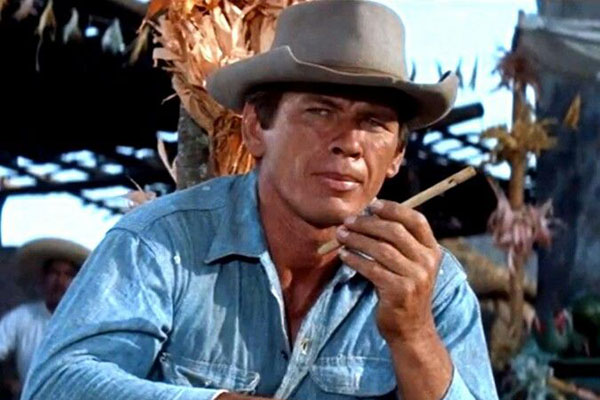 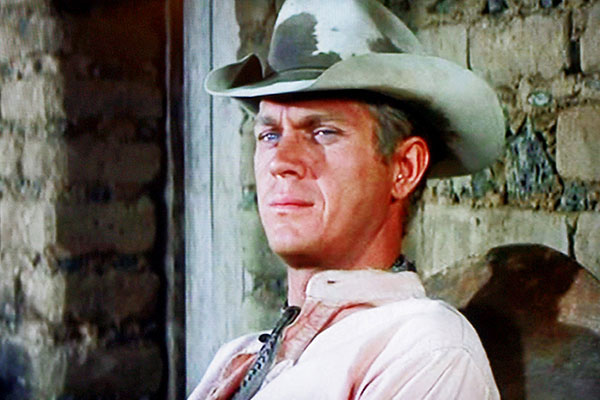 I think if the movie were about 30 minutes or so shorter, it would have been much better. It's a film from the 1960s and it has that lax, 1960s pace to it. There are longs establishing scenes, long quiet moments, and just long, long sections everywhere. The are great, fast-paced moments, but they're in there with the much longer, much more tedious sections of the film. Considering that it clocks in at a pretty languid two-plus hours, there's plenty that could have been excised from the film without hurting the overall film.

I can see why people consider this film a classic, but it just didn't work for me. It's a little too long, a little too rough, and just too tedious to really hook me. While I like sections of this movie, on the whole it just fell flat. Maybe the sequels, which are all much shorter films, will be able to redeem this for me.