And Now a Word From an Alternate Timeline

Honestly, the proposition of a Magnificent Seven sequel had to seem pretty ridiculous at the time. Bearing in mind that there was a six year gap between the first movie and the Return of the Seven, and then it was a "Return" in name only as half the original characters had died in the previous film. As the series went on it really started to stretch the bounds of its formula. That then leads us to the fourth and final film in the original series, The Magnificent Seven Ride!, a sequel in name only that feels like it was delivered from an alternate universe. Sure, there's a character named Chris Adams and, yes, he does eventually bring a posse of seven men together, but that's about the only parts of the movie that feel connected to what came before. 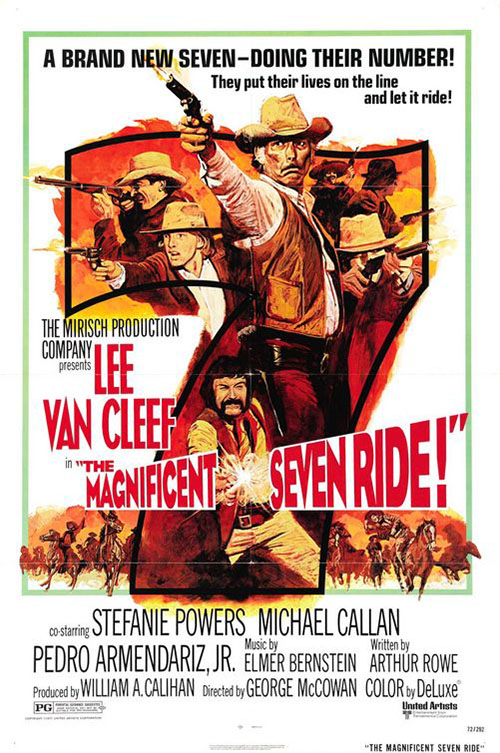 In this final original series film, we're once again introduced to Chris Adams (now played by Lee Van Cleef), the one-time hired gun who now serves as a U.S. Marshal and sheriff for a small Western town in Arizona. Adams settled down, got married, and went about the business of keeping the peace, but that all gets thrown out the window when a small-time criminal he previously let go, Shelley Donovan (Darrell Larson) comes back with a vengeance. The petty crook upgrades, robs the bank, kills a bunch of people, and kidnaps Adams's new bride. This forced Adams, along with Noah Forbes (Michael Callan), a writer detailing Adams's life story, to ride off after the ruffians and bring about some kind of outlaw justice. This story then gets wrapped into a larger one about the outlaw De Toro since Donovan has teamed up with De Toro. Now to save a small town and exact the kind of justice Adams wants, he has to pull together another band of seven to fight an impossible fight.

The first issue I had with the movie came right at the start when the film elected to make Adams into a lawman. While, sure, it's a trope that a gun-for-hire will get picked up by a local town to act as their duly elected sheriff, this new setting for Adams felt out of character when we take all his previous stories into account. Adams was a man on the opposite site of the law, a guy willing to exact outlaw justice to save people, but he never seemed like the kind of person that wanted or needed a badge (or, for that matter, that he was the kind of person to ever settle down). It would have been one thing if the movie had just made him a sheriff and he'd grudging taken the job, but this version of Adams seems at home being a lawman. Worse, the movie inexplicably wants us to believe he'd become a U.S. Marshal, something that even back in the days of the Wild West still would have required training, paperwork, and authorization. Even a simple background check should have ruled him as unqualified.

Seriously, I spent the first five minutes of the movie wondering who this lawman was before I realize it was supposed to be our hero. The film doesn't even give him a name until the opening scenes of the movie are over with leaving us dangling trying to figure things out. By the time it's revealed that this character, this lawman, is Adams, I was struggling to understand his character or care about him. This just brings me back to my point from Guns of the Magnificent Seven: instead of just recasting Adams (twice now) and treating the films as if they were all one connected storyline, it would have been better if they would have made this series about people connected to Adams, friends, colleagues, or family. If this movie was about Doug Adams, U.S. Marshall and brother of the famous Chris, most of this opening section would have worked so much better for me.

Not that the film is in any rush to get to any kind of action. Hell, we don't even get the formation of this movie's titular "Seven" until the movie is half over. The whole point of these films is to find a bad guy, bring the posse together, and then watch as half of them die while the bad guys are all taken care of. While this film eventually has those beats, it takes a long time to get there. 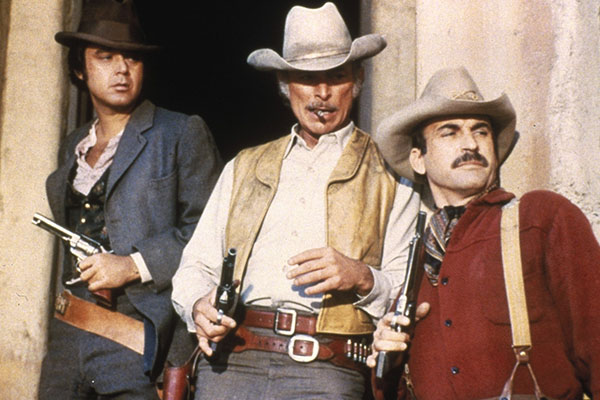 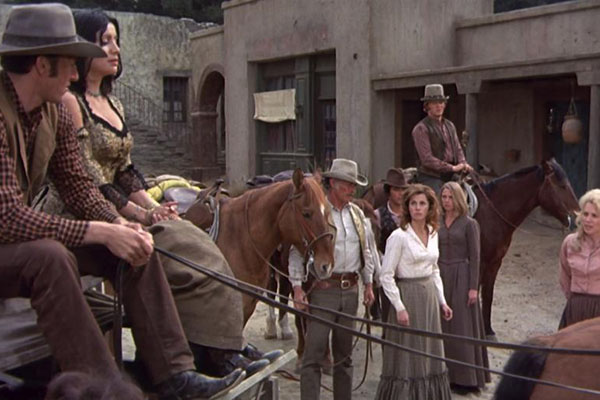 This can be blamed, at least in part, on the era the film was made in. The Magnificent Seven Ride! was filmed in the 1970s and, as I've noted on this site before, films of the 1970s have a noticeably slower pace. I wouldn't call if padding so much as the style of era looked for longer establishing shots, more time spent on character's face and less on action and dialogue. This film very much feels like a product of that era, with a number of long shots that could have been pared down, and multiple sequences of the the hero and the writer riding back and forth from location to location. "We're going over here so, to establish this, lets get a long sequence of the heroes riding." I realize that "ride" was in the title of the movie, but they certainly didn't need to make it quite so literal.

And yet, at the same time, the film also quickly rushed past key moments that could have fleshed out the film. Of course there's the fact that we're just told Adams is a Marshal without getting any background for why he suddenly decided to become a lawman. Along with that the whole film has a very truncated timeline, with the events happening over the course of only a couple of days despite the fact that for the heroes to ride to all the locations they needed to, it would have taken weeks, not hours. Despite it's slow pacing in the early going, the film suddenly starts rushing through key moments that were needed to really add context to the film.

The worst offender is a sequence at the half-way point. Adams shows up at a prison to take out five prisoners he put there (to make his seven) after he, and the writer, had just ridden out of the little town they were going to save. Despite all the long, establishing shots that preceded it, Adams suddenly shows up at the prison talking about "governor-signed pardons" and "authorization to take the prisoners". Because a key scene -- Adams riding the capital to talk to the governor and get his papers -- wasn't in the movie I honestly thought Adams was just bluffing, that he made it all up. But, no, he's really done all that, and bought a ton of guns and supplies the crew would need to defend the town. These are key moments that actually would have helped the film, but instead they're skipped so we can get more shots of riding.

This whole sequence also highlights a bigger issue: the whole reason the townspeople are stuck in the town is because De Toro and his crew ransacked the place and stole all their horses. It's a 20 mile walk across desert to escape the town, so the villagers are stuck there. They even discuss the fact that if they just had horses they could leave, but instead of going and buying the one thing that could save lives and avoid violence, Adams then spend a bunch of money on munitions and frees five dangerous criminals. I'm pretty certain this isn't justice, something a lawman like Adams should know. 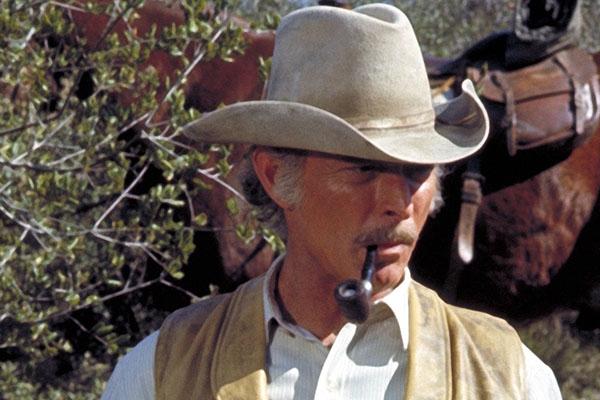 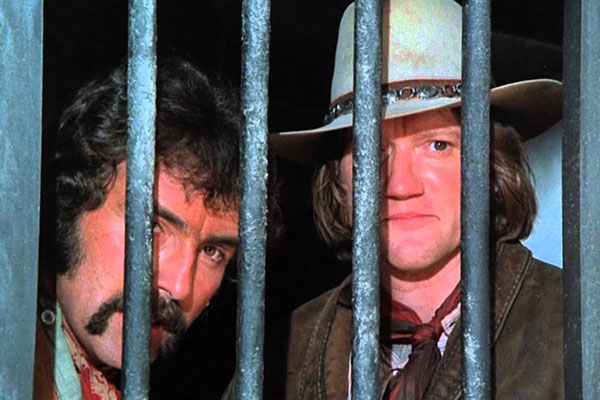 Of course if he did the logical thing then we wouldn't get seven men defending a small town which, of course, is the story of every one of these movies. And once we get the guys to the town, the film plays out just like you'd expect. Long odds, lot of shooting, and then half the crew dies. It's the exact same climax we've already seen three times before, and Ride! isn't any more graceful about it than in the previous three films.

Honestly, this movie manages to take the big, climactic section and botch even that. This is because this is easily the cheapest looking film in the series. The action sequences are filmed up close, without a lot going on in any one shot (probably to save on costs). The pacing is all wrong for the climax and it just left me bored. And then it's just over -- where other films in the series have made an entire last act out of the big climax, this time it's barely a blip before the shooting ends and the heroes cheer for their big win. It's shallow and hollow.

The Magnificent Seven Ride! is a long, boring, terrible movie that would have been forgotten had it not been part of this long-running franchise. It's slow, its tedious, and it's cheap looking. I kept looking at the Wikipedia page for the movie while watching it just to make sure it wasn't some kind of made-for-TV reboot, a film made on the cheap to air on lazy Sunday afternoons. But no, this was a real movie, released in theaters. I feel bad for anyone that went out and paid good money to see this film. The only consolation is that after this film the franchise went dormant for a few decades.