We started with Fallen Kingdom and now our tour of the many Parks Jurassic concludes with that film's predecessor, the first Jurassic World. Suffice it to say I was not exactly enthused at the idea of a return trip to Isla Nublar, but my friends (and my wife) really wanted to see the movie in theaters, so I went at the time. I was not impressed. 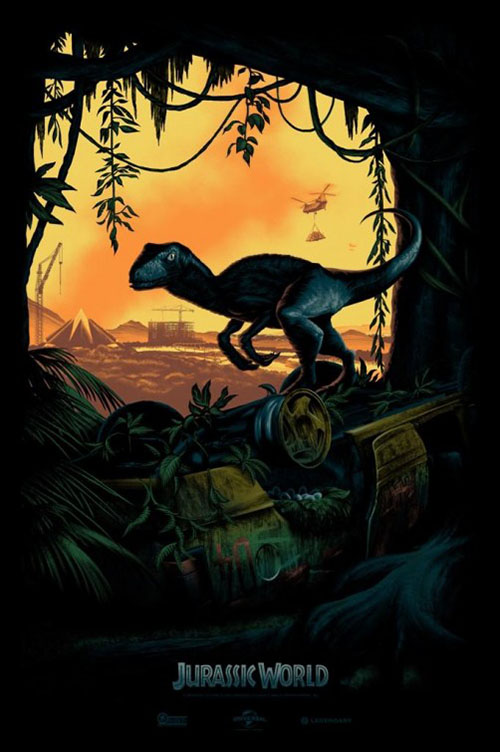 However, I always try to go into movies with an open mind for this site, so I knew I had to give this film a fair shake in my second viewing. And I will fully admit that there's a thread of a good movie lurking within the runtime of Jurassic World. Not much of one, mind you and it boggles my mind that this film made over $1.6 Billion at the box office. I can't assume that it was because the movie was any good -- even people that went to see the film, and liked it at the time, now tend to think this movie was crap. So what was it about Jurassic World that made it such a cultural phenomenon?

Well, it's certainly not the story. Somehow retconning away the events of The Lost World and Jurassic Park III (because it would have had to, otherwise how could a park be reopened on the island after both islands were made restricted zones by multiple governments?), this film assumes that after the events of the first movie, Ingen just went about their business, crafting a newer, bigger park to rise from the ashes of the old. And, for a long time, it works. This new park, Jurassic World, is successful, with plenty of big exhibits under its belt and years and years without any major incidents (as in none of the guests have been eaten). That all changes, though, when a new dinosaur, The Indominus Rex (a genetic hybrid crafted by Ingen), breaks out of its pen and causes all levels of havoc.

Wouldn't you know it, while the Rex is out, terrorizing people and making a big PR disaster for Ingen, there's also the matter of a couple of kids stuck out in no-man's land on the island. These two, Gray Mitchell (Ty Simpkins) and Zach Mitchell (Nick Robinson), are the nephews of park head Claire Dearing (Bryce Dallas Howard). Claire has to head into the depths of the island while this emergency is going on to save her nephews, and she's going to need the help of raptor trainer Owen Grady (Chris Pratt) to do it.

My god is there a lot of stuff going on in this movie. We have to get introduced to the park, the park runner, the park owner, the nephews, the new dinosaur, the raptor trainer, and the trained raptors all in quick succession just so the movie can burn through all the various plot beats it wants to hit. The problem is that there are so many beats it has to burn through none of them really stick. Just dealing with the new (to us) park and the giant dinosaur that's going to break free and cause carnage would be enough plot for any movie (hell, it was enough plot for the first one, come to think of it). We didn't need the whole extra plot about the kids (whose parents, the movie wants us to know, are getting divorced). They're a red herring, a plot device the drag the movie out by another half an hour for absolutely no reason. 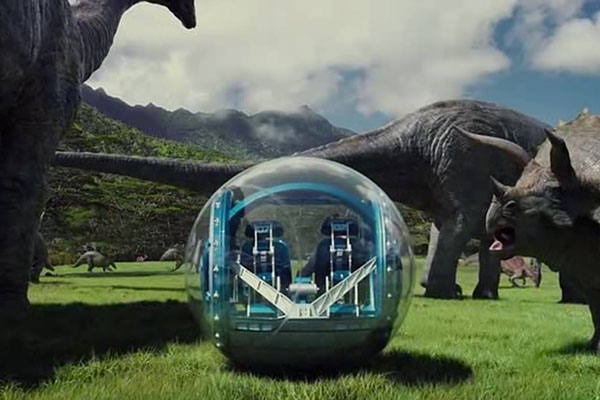 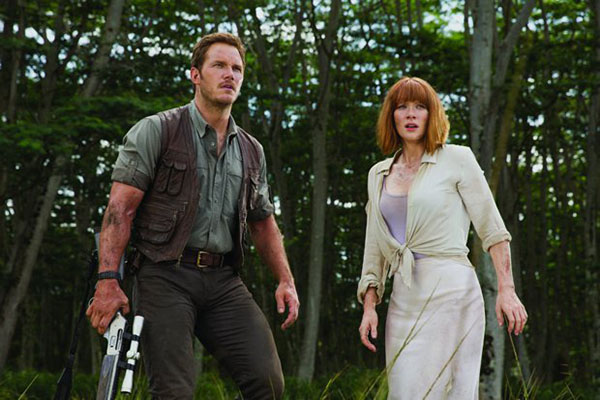 Seriously, they're in here for no reason. Claire has to go out into the park to save them except, lo and behold, before she can get to them (with Owen in tow), the kids find a way to hot-wire an old Jurassic Park jeep and drive themselves back to the main park. They save themselves without Claire or Owen being necessary. Claire could have stayed at the main park, doing her job during a catastrophe, and she would have had as much impact on the nephews and their storyline as she did going out into the jungle to save them. What was the point of that?

Not that the actual park calamity really should have happened either. A series of events all had to fall in just the right way for the Indominus Rex to break free, and it all comes down to monumental stupidity at every level. First, the Indominus Rex has to be created in a classified fashion so that even the person running the park is unaware of everything it can do (like hide its body temperature, actively camouflage itself, and communicate like a raptor). Then, the people guarding it have to be stupid enough to open the main door to its cage, letting it out. The park also has to have invisible electric fences, instead of real ones, that the Rex can then ignore as it cruises across the island.

And then, at every step of the process, the people in charge have to say to themselves, "hey, you know what? Let's not evacuate the island because of the bad PR this could bring us. Let's instead risk everyone on the island and potentially have them all get eaten because that's not somehow worse PR." The people in control act like they've trained for an event like this but they never once act like they know what they're doing. It makes absolutely no logical sense at any step of the process.

But then, to counteract this, sometimes the movie acts so smart. It goes out of its way to acknowledge that the dinosaurs in the movie don't look like real dinosaurs (i.e., they lack feathers) because they're genetic hybrids with frog and lizard DNA patched into the genome to make functional creatures (a nod to a similar plot point from one of the two books). The raptor training sequences are also smart -- if you're going to have creatures this intelligent in the movie you may as well do something more with them than just making them into the villains. It's logical and intelligent, showing good ideas at some step in the process. 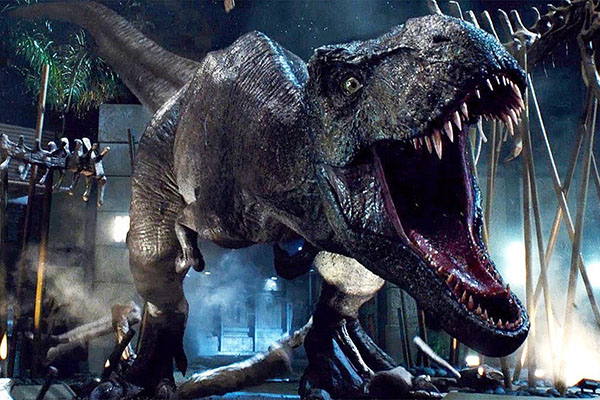 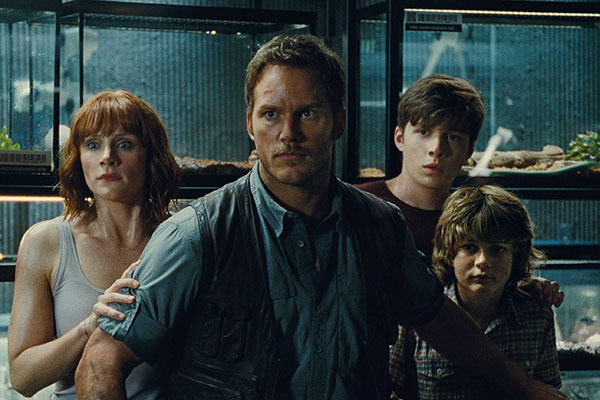 Not that the movie does anything to capitalize on this. The smart raptors are only thrown in so there can be a scene later where Owen rides along with the pack on a motorcycle. It's a great shot for a poster, to be sure, but it doesn't make any logical sense if you think about it. These are raptors raised in captivity and the first time you let them out you're going to ride a loud machine right next to them. Despite what the movie shows us, these creatures wouldn't work as an effective team in this context; they'd freak out, eat Owen, eat each other, and then the survivors would make a break for the main park so they could partake of some guest.

As for the fact that Indominus Rex is this super dino, it doesn't really show it. Sure, for about half the movie it's an impressive beast. And then, most of the way in, it just forgets it can camouflage or do any other cool things. A T-Rex comes after it and instead of plotting and hunting and carefully playing with this potential beast, it takes in a head-to-head fight and loses. This was the uber-dinosaur that wrecked the island? This thing? Really?

There are so many other threads like this in the movie, ideas and plot points that are included that don't really add up to anything. There's a love story between Owen and Claire that makes no sense in the context of either character (and features some of the worst written, worst acted dialogue in the movie). There are whole sequences with the guys in the operations booth that could have been cut because none of those characters actively add up to anything. And the plot point about the nephews and their parents' divorce? That goes nowhere as well. It's a franken-script, cobbled together from a bunch of ideas that might have, on their own, made two or three decent (probably not great, but decent) movies. Stitched together, though, it all amounts to slightly less than nothing.

About the only thing the movie gets right are the dinosaurs. They certainly look cool. Was it enough to make $1.6 Billion at the box office? I wouldn't think so, but apparently I was wrong. Still, even now, having watched the movie two more times than I wanted two (as in two times at all) I still can't explain why this movie was a hit. It sucks. It's not Fallen Kingdom bad, but that's because that movie is actively terrible. Jurassic World is just an ineptly crafted movie that somehow went on to be a mega-blockbuster. It's popcorn that punched above its class, and if people like that then good for them. I just don't want to ever have to watch this film again.