And Cue the Dinosaurs...

I've noted before that I don't really like the first Jurassic Park film. I was a pretentious 12-year-old, to be sure, when this film came out, and I did that hipster-thing of hating the movie because it wasn't enough like the book. To be fair to younger me, though, this movie really only follows the bare bones (insert fossil joke) of the original novel by Michal Crichton, excising a bunch of extra content and downplaying a bunch of the superfluous science stuff to create a tighter, more family friendly movie. If what you wanted to see on the big screen was the novel, writ large, then the 1993 film was not the movie for you. 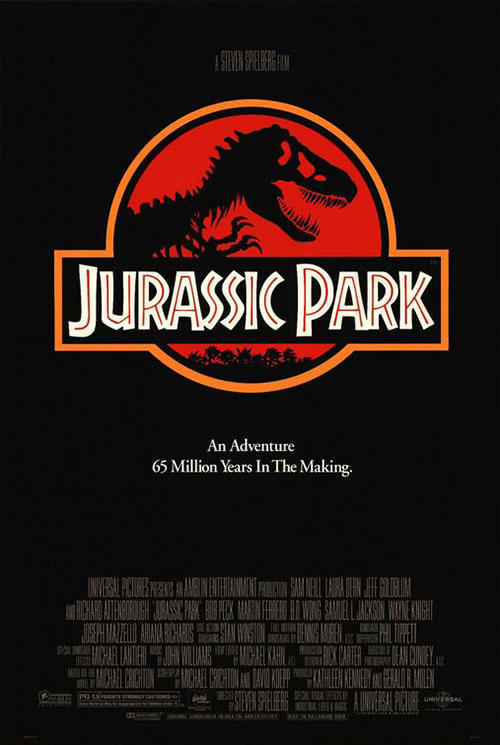 Older, wiser me (well, maybe not wiser) long ago learned that Michael Crichton's books are kind of crap. While I will always has a soft place in my heart for Westworld that doesn't change the fact that man was a pretty crappy author. Sure, he had interesting ideas sometimes, but he also wrote cheap sci-fi potboilers that frequently were also casually racist and sexist (like Rising Sun, Congo, and Disclosure) not to mention that they often had a pretty bad understanding of the science they were pitching. What I'm saying is that I'm neither a huge fan of the novel anymore, nor will I go back and read it again. I do know that Crichton sucks so I'm no longer violently opposed to movies changing his text to suit the big screen.

We aren't going to go into the fact that the scientific basis for this movie -- mosquitoes trapped in amber and fossilized for millions of years -- has been proven to be bunk just because it was 1993 when this movie came out and that fact hadn't yet been proven. We'll also forgive the fact that the dinos aren't more colorful (all very drab browns and tans) or that they aren't covered in feathers. Our understand of dinosaurs has changed a lot in the intervening years since the original Jurassic Park came out, so I'm willing to forgive the bad science for a decently made movie of the time. My issue is that the movie we got, Jurassic Park, sucks. That's not 12-year-old me saying that either, but 37-year-old, just had to suffer through it again for this site, me, and he still hates this stupid movie.

The biggest sin Jurassic Park commits, and the one I'm never able to get over, is just how boring it is. For a film about dinosaurs running amok, it takes forever to actually to a point where the dinosaurs are actually scary. We get told over and over how scary the velociraptors are but we don't get to see one (a scary adult one, anyway) for a good two-third of the movie. It's half-way into the film before we see a T-Rex or another other predator. Sure, we get to see plenty of dinosaurs before then, but they're all herbivores and there aren't any scares. Sure, yes, dinosaurs on the big screen were supposed to be magical, and the effects are pretty impressive for the time (although the CGI has not aged well) but when the selling point of the film is that the dinosaurs are going to break out and eat people, you can't make us wait half the runtime to get there. 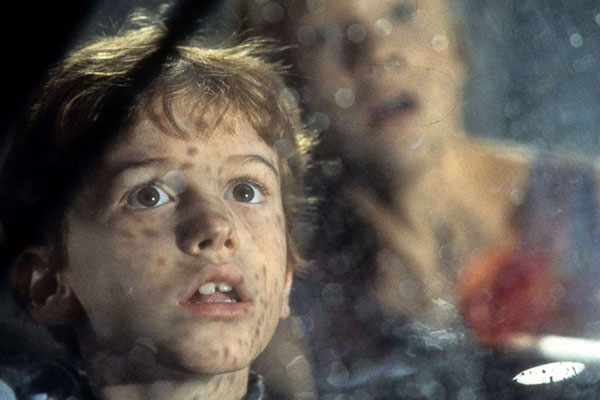 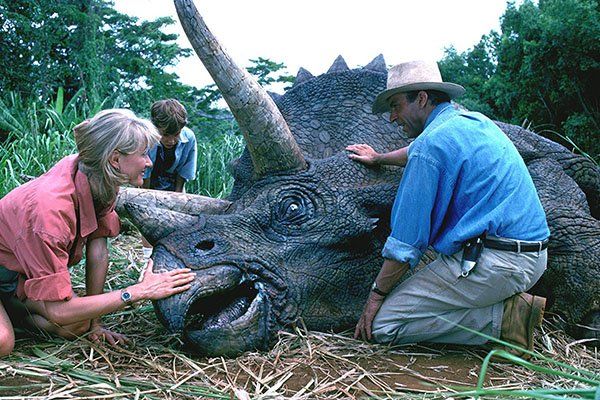 Film fans are, of course, going to argue with me that Steven Spielberg, director of this film, was pulling the same trick he did with Jaws, keeping the threat of the dinosaurs on the down-low (much like a shark in the water) and hiding the villainous monster as much as possible to keep them scary. That argument could hold up if the point of the dinos as to be scary, but the movie goes out of its way to keep everything safe and kind and family friendly. The Spielberg that showed up for this movie wasn't the Jaws director but the crowd-pleasing E.T. guy -- he wanted something the little kids could watch, and that deflates all the possible thrills of the movie.

As a case-in-point, the T-Rex is sold as a big threat (the movie is in love with the raptors more, but we won't get to them for another half-an-hour in-movie). Having just eaten the park's lawyer (a moment that's played for laughs, not scare, mind you), some of the park patrons are fleeing the T-Rex in a jeep, which the monster catching up to them. He gets within range of the Jeep, but instead of lowering his jaw and biting the back of it -- something he was in range to do, mind you, and since he has no understanding of vehicles it's not as though he'd think "this is a metal beast and I shouldn't bite it" -- he smacks it a couple of times with his head before getting winded and going off to have a smoke with the raptors around the watering hole. Every time we have a chance for some good dino-killing action, the moments are deflated.

It's not until the last act of the film that the raptors become the real villains, and we've waited so long for it that it no longer matters. They're there, then gone, defeated by a couple of kids, and then the patrons run away as the credits roll. It's like the film does a bait and switch, promising us monsters and then giving us a family adventure. I want monsters, was promised disemboweling via raptor claws (something the movie underlines heavily and never delivers), but by the time the credits roll I get nothing but a half-eaten lawyer, an off-screen death of the park's tech guy, and a single eaten off arm. Every good death happens off screen, all so the kiddies in the theater don't get too scared.

I just really hate how family friendly this movie goes out of it's way to be. I get that a PG movie with dinosaurs would put asses in seats. Kids love dinos, and the promise of some light, off-screen thrills certainly could entertain adults. The movie keeps making the case that the monsters are scary, but it's scary in the same way the Universal Monsters are scary: not really at all. I guess it makes sense that Universal made this movie (and all its sequels) since they already knew how to make bloodless horror films. I'm willing to forgive that from movies made in the 1930s and 1940s, but something produced in 1993 when the PG-13 rating was around, not so much. You can't play it both ways, being safe and sanitized and yet scary at the same time. It just doesn't work. 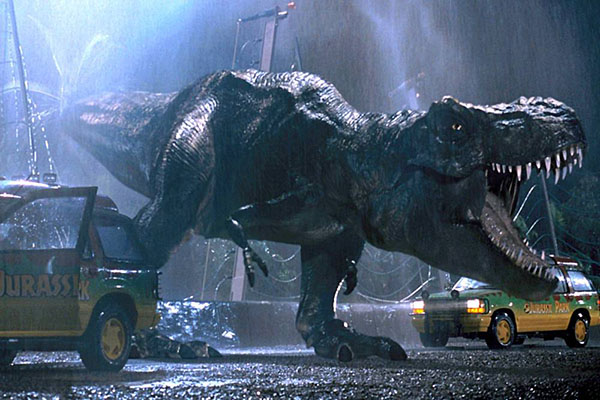 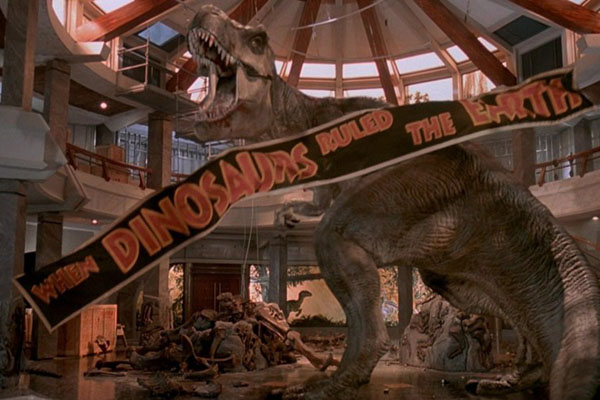 So yes, beyond the issues with the science, or the jokes made about one of the kids being a "UNIX hacker" that just so happens to be able to easily navigate a custom designed OS to reboot the park, or the fact that everything in the movie that isn't the raptors is played for laughs, the movie just fails to deliver on the one thing it had to do to make me happy. If you want to sell me on a movie about dinosaurs breaking free and eating people then give me that. Make it thrilling, make it exciting, make it interesting. The only thing Jurassic Park manages to give us are dinosaurs on the big screen, a feat that has been greatly diminished by 25 years and four additional movies in the series.

To put it another way, and the paraphrase the movie itself: the producers spent so long working to see if the could make a family-friendly Jurassic Park, they never stopped to think if they should. Now, hopefully, I'll never have to watch this stupid movie again.