Despite really not enjoying Jurassic Park as a child (or as an adult more recently), I did still love the book when I read it. When a second novel came out, The Lost World, I naturally had to read that as well. And, yes, I enjoyed that book as well. For the life of me I can't remember why, though, as now I have no memory of what that book was about. I can still remember whole passages from the first novel, but the second is a total blank. 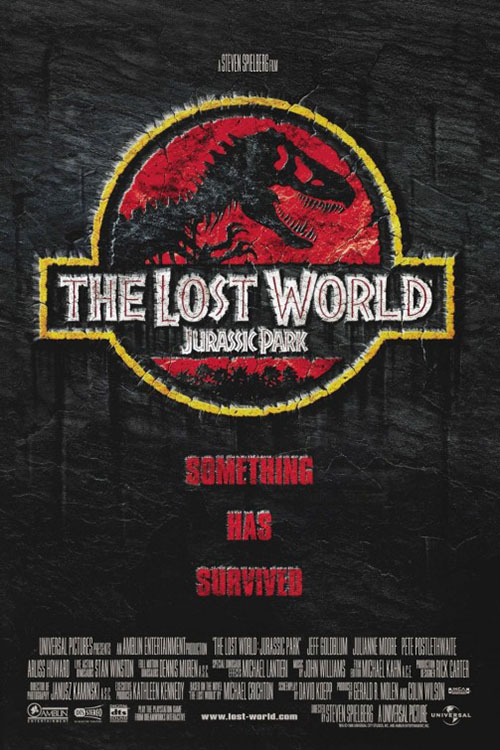 That might explain why, as a teenager, I hated the second movie, The Lost Word: Jurassic Park (since it wasn't at all true to the novel) but now, a couple of decades later, I can watch the movie and not completely hate it. Honestly, I rather enjoyed the film upon second watching (yes, I haven't seen the film since it originally came out in theaters). Maybe it's just been long enough, or the fact that no one (myself included) remembers or cares about the second novel, but the movie works in a way that the first one never has.

Sometime after the events of the first film, a family venturing on a different, nearby island, Isla Sorna (to the original film's Isla Nublar) is attacked by little dinosaurs. There's immediately a panic at the Jurassic Park-controlling company, Ingen, and they quickly decide something has to be done. What that is, exactly is up in the air. John Hammond (a returning Richard Attenborough) taps a rather unwilling Dr. Ian Malcolm (Jeff Goldblum, of course) to head to Isla Sorna and study the dinosaurs from a nice, quiet, and safe distance. The goal is to learn about the dinos without disturbing the natural ecology the beasts have created for themselves. They hope to win public opinion for the dinosaurs and get the island established as a protected habitat.

A team is put together with Malcolm's girlfriend, behavioral paleontologist Dr. Sara Harding (Julianne Moore), documentary journalist and Green Peace wannabe Nick Van Owen (Vince Vaughn), and technology expert Eddie Carr (Richard Shiff), along with Malcolm's stowaway daughter Kelly (Vanessa Lee Chester). Unfortunately for them there's a second expedition soon sent to the island, a collection of big game hunters there for one mission: catch a bunch of dinosaurs for Ingen so they can populate a theme park built right in the heart of San Francisco. I'm sure this won't go poorly for anyone at all.

There are two sides to The Lost World and one half, the dino killing action, works really well. With more bodies to populate both teams, and less rules for the dinosaurs to follow (no fences, no controls, no safety), the dino killing action could get much better and much more thrilling. As a PG-13 movie the film couldn't go as over the top as some of us gore-hounds might have liked, but within the constraints of the rating, The Lost World delivers all the dino thrills and chills you could want -- everything the first movie promised and failed to deliver. 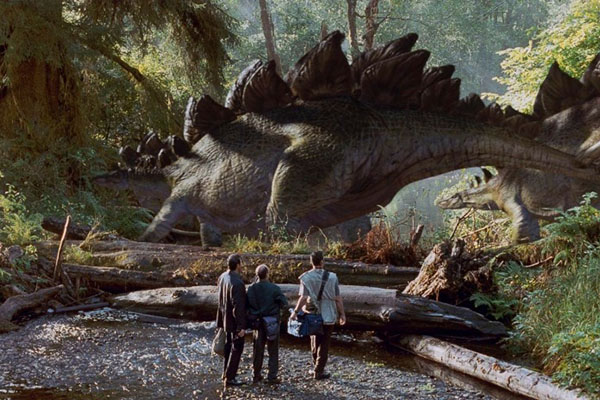 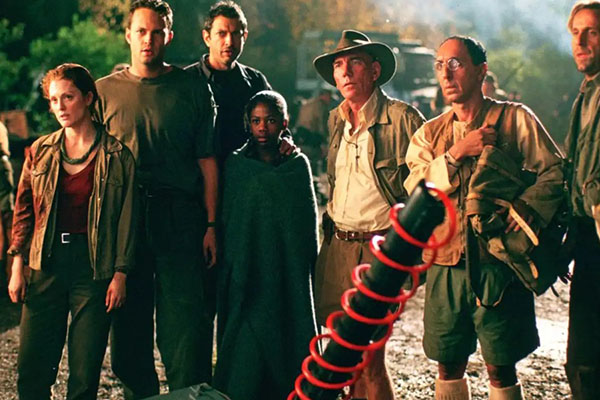 It also feels like a much leaner movie (barring an ending we'll get to in a moment). Without the need to establish that, "yes, dinosaurs are back," the film could almost immediately get to the good stuff. The intro of all the characters is shorter, the dangers quickly established, and the beasts themselves are on screen much earlier and more consistently. The original Jurassic Park was a slog to sit through, one that kept making you wait for anything interesting to happen. Here, though, everyone know the whole scenario could go to Hell in a hand basket real quick. No need to pussy foot around, and the film does not.

That said, even with as fleet as the film is, there was still plenty that could have been cut or changed to make the overall story work better. Firstly, obviously the second team of big game hunters are bad guys -- it's practically telegraphed the second they're introduced. Watching them come in and then get picked of is satisfying in a way, but we never really get to know any of the guys except for their leader, Roland Tembo (Pete Postiethwaite), so their deaths don't mean much to us. We don't care if they live or die, so they're just so much (off screen carnage). Worse, the one guy we really want to see get eaten from this team, Tembo, survives the film despite the overwhelming hubris he exhibits throughout the film.

Meanwhile, the heroes are a bunch of characters we should care about, and not a single one of them gets any resolution. Sara is mad at Ian because he's never really there even when they're together. They've been dating for years, but he still doesn't show up for prearranged dates, dinners out, parties and the like. She wants him to be there at times other than when they're exploring a dino-infested danger island. And then, after it's mentioned, this plot line is never brought up again? So, everything is okay? Are we to assume they get married after this due to the healing power of almost dying at the claws of a velociraptor? Who knows.

Ian's kid, Kelly, has a similar story. She got kicked off the school gymnastics team. She's made because her father didn't pay enough attention to her to even know this. Plus, he's leaving when she needs him instead of being there for her. And, again, nothing is ever resolved here. She stows away on the expedition to prove a point, to show she should be there, and then almost instantly regrets it. It doesn't make Ian a better, more attentive father, though, and she doesn't seem to care about that after all is said and done. 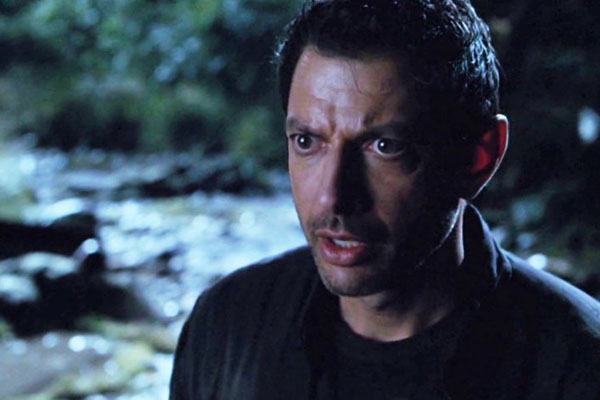 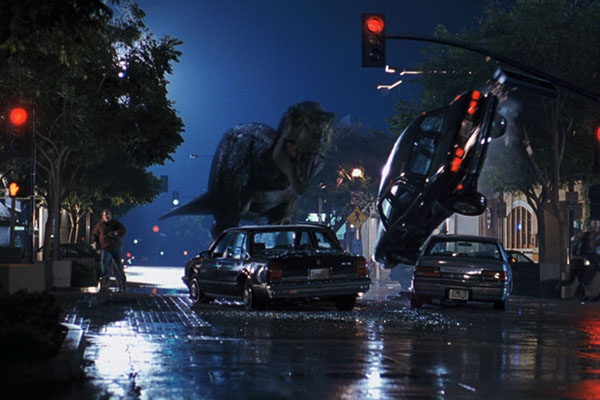 The worst part of the film, though, is the ending. After escaping the island, our team of heroes realizes that the remains of the team of big game hunters have managed to capture a hulk T-Rex and its infant kid, and both dinos have been put on ships bound for San Francisco. However, once the boat arrives at the big unveiling, everything goes tits up. The big boat crashes into the docks because everyone on board is dead. Then, someone pushes the button to open the cargo hold and the T-Rex escapes. The giant dino goes tearing off across the city, looking for its kid. This leads to an amusing amount of carnage as the people of San Fran have to deal with a dino in their midst.

The issue I have with this ending is that the setup doesn't make any sense. It's established by the characters that there was only one dino on board the vessel, the big T-Rex. If you recall, that dino was trapped in the cargo hold so how did all the sailors on the boat die? It's like the setup for Dracula but without the thought involved. Were there raptors secretly on the boat? Did they somehow bail out near the coast, stealing a life raft so they could sail down to Baja and enjoy some time on the beaches, drinking margaritas and eating tourists? The movie says "no" so unless there's a deleted scene that explains this, the whole setup makes no sense.

Worse, the last section of the flick is entirely superfluous. The sequence is setup to point out the hubris of the new president of Ingen. But here's the thing: he was part of the team of big game hunters on the island. If the movie wanted to teach him a lesson, they could have had him get eaten on Isla Sorna -- everything that happens in San Fran, all the carnage there, is totally unnecessary. The sequence could have been cut and no one would have cared. If anything, it would have made the movie better because the last fifteen minutes of the movie are so very dumb.

In the end, I'm torn about The Lost World: Jurassic Park. On the one hand, I really enjoy whole portions of the movie -- the carnage along with the quippy Goldblum. But everything in and around that good meat, including the entire last act of the film, could have been ditched and I wouldn't have missed it in the least. At best The Lost World is half of a good movie. It's still better than Jurassic Park, but only just.