So far our tour of the series has take us to the original Jurassic Park (which was boring and sucked) and then The Lost World (which was actually surprisingly fun, if trashy). Seemingly on an upswing for the series (even if we know it all comes crashing down by Fallen Kingdom) I went into Jurassic Park III with the hopes that this movie was actually better than I (or anyone else) remembered. 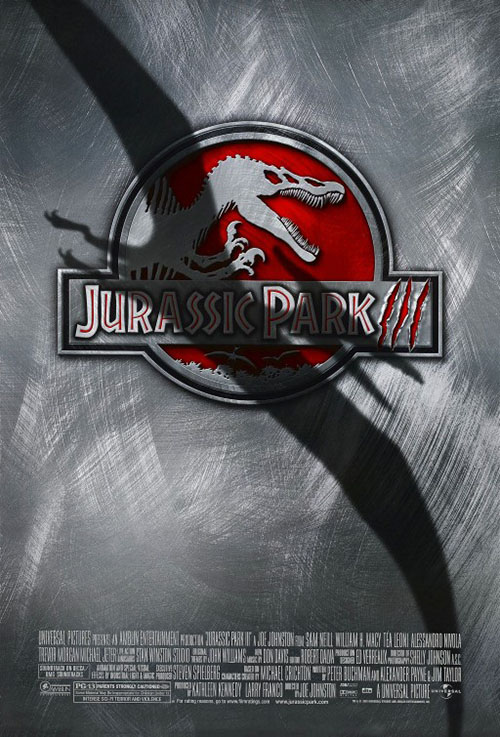 Sadly, it wasn't. Despite being directed by Joe Johnston, director of The Rocketeer and Captain America: The First Avenger -- delightfully fun, retro entertainments -- this movie shows none of the spark or delight of his best movies. This is a cheap cash-in, a film made to try and bank on the popularity of the name "Jurassic Park" without any of the wit or soul to go along with it.

I supposed that should be expected to a certain extent. This is the first of the films not based on a book by Michael Crichton, instead created whole-cloth by the Hollywood machine. And, do not, it's a Hollywood machine that doesn't involve Spielberg -- although is production company Amblin Entertainment oversaw this film, Spielberg didn't had an active hand in this movie, not like he did with the first two. This is the shambling body of the beat continuing on long after the brain itself has died.

In Jurassic Park III, Dr. Alan Grant (a returning, paycheck-loving Sam Neill) is sucked back to the islands (Isla Sorna, to be specific, although he's never been to that island, as he points out) to escort a couple of thrill-seekers for their anniversary. The plan is to fly low over the island, look at some dinos, and then leave. At least, that's Dr. Grant's plan. What he doesn't know, though, is that the happy couple are there to find their son who was lost on the island. Unfortunately their plan crashes, and everyone is stuck on the ground, forced to escape back to the coast. And, of course, the dinos will be after them because that's what these movies are all about.

So, first and foremost, the dino action in this movie is pretty lackluster. There aren't a lot of good scares to be had in the film, with most of the carnage coming at the start of the film (when two members of the team are quickly picked off). Sure, there are raptors that appear, because this series loves its raptors, but they actually don't do a whole lot. Much is made to build them up, to show off their intelligence (and their new-found ability to speak that, apparently, they always had and we didn't know it), but the final confrontation is more of a detente, two teams meeting each other then going their separate ways. It leaves a lot to be desired for the big bad guys of the series. 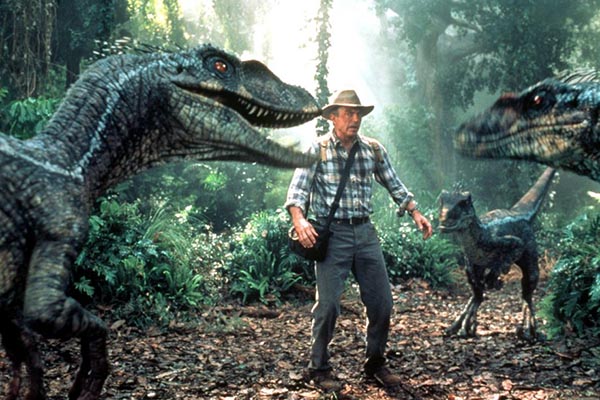 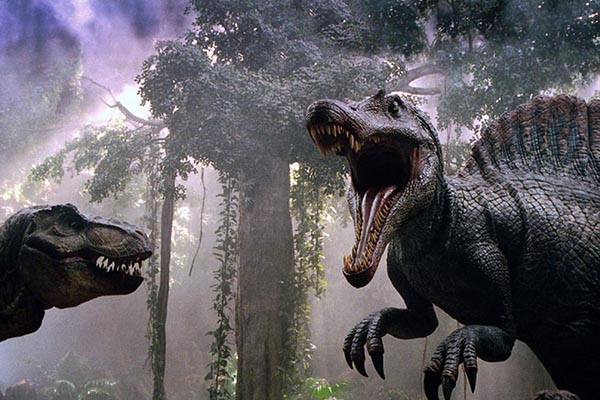 Instead of the raptors, or the T-Rex, as the villains, we get the newly introduced Spinosaurus. This beast, larger than a T-Rex with a wicked fin down its back, is said to be some secret dinosaur Ingen cooked up on Isla Sorna. Everyone agrees that this means Ingen cooked up a lot of secret dinos and everyone should be very careful. And then nothing comes of it. Sure, the people get chased around the island a lot by the Spinosaurus, but there aren't any other new or special dinos which also means there's no reason for this new dino to be introduced. Or, more specifically, there's no reason for such a big deal to be made about it. Have it fight a T-Rex, take out a couple of raptors, and suddenly you have a great carnivore. There's no reason to give it some mysterious back-story if there's no pay-off for it down the road.

While we're not exploring the mysterious origins of the Spinosaurus (or other dinos, for that matter), we spend a lot of time with parents Paul Kirby (William H. Macy) and Amanda Kirby (Tea Leoni), ex-husband and ex-wife as they search for their kid, Eric Kirby (Trevor Morgan). Mostly this boils down to the two of them reconnecting and finding what they loved about each other as they spend two days running scared across Isla Sorna. This would have played a whole lot better if Macy and Leoni had any chemistry at all, but they don't. Macy is great at playing a sad-sack character, but his natural charms as the downtrodden don't mix with Leoni's shrill performance as the mother. Most of their "meet-cute" moments make you realize these two people have nothing in common and no reason to be in love. Their divorce was the best choice they ever made.

My big issue with this whole plot line is that it distracts from all the other things the movie could be doing. We could spend more time with these super-brain raptors, watching their hunt as they chased the humans across Isla Sorna. We could have had the paleontologists exploring the abandoned Ingen labs on the island, delving into the various mysteries within. Hell, we could have just had a bunch more dino action, with bigger kills and more scares. Anything would have been better than this half-baked love story the movie simply didn't need.

Hell, I wouldn't have minded spending more time with Eric, the lost kid. This is the first time a child in this series has been written well, but Eric is. He's resourceful, intelligent, and best of all, not annoying in the slightest. More focus on the bro-time between him and Alan Grant would have been great -- the two quickly strike up a rapport and bond over their hate for dinosaurs (and Ian Malcolm). Less time focusing on his parents and more time given to Eric would have been great. 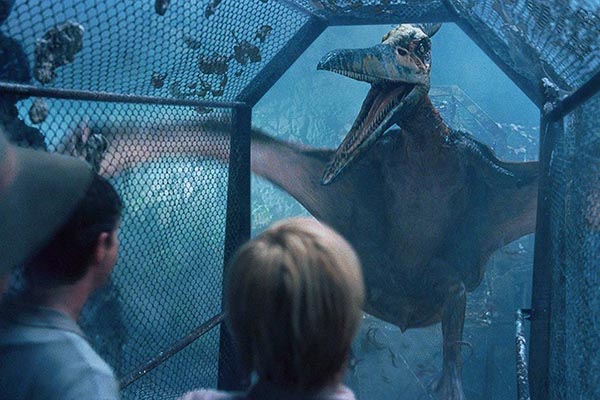 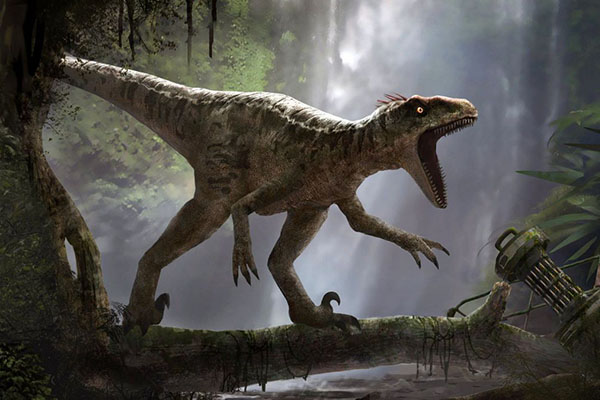 But then, really, anything would have been better than the collection of half-baked ideas and ill-advised plots the movie actually pursued. There are a lot of things the movies could have done, bits of plot from the two books the previous movies didn't actually use. Instead of any of that, we get a budget-sized jungle run in Jurassic Park III. It's not interesting, or thrilling, or fun. It's people running, again, all because they're at Jurassic Park. Frankly, we've seen this before, and the last time it was done so much better.

And, unfortunately, the series doesn't really recover after this. Sure, the series took 14 years off before the next film came out, but even then it really wasn't that interesting. People at a park, running from dinos. I'm really starting to get tired of that, and since that's the whole point of these movies, that's saying something.