Why Are You So Blue, Blue?

I will freely admit that I'm not the biggest fan of the Jurassic Park film series. I saw the first movie when I was 12 after having already read the book (because it had dinosaurs in it and dinosaurs stop being cool... never) and I felt like the movie was a pale imitation of the original. Well, okay, I was twelve so I'm sure I was just mad at it and said, "it sucked" (in a voice not dissimilar to the lead character in The Critic). But still, since that day my family took me to see it in theaters, I've been pretty down on the whole series. 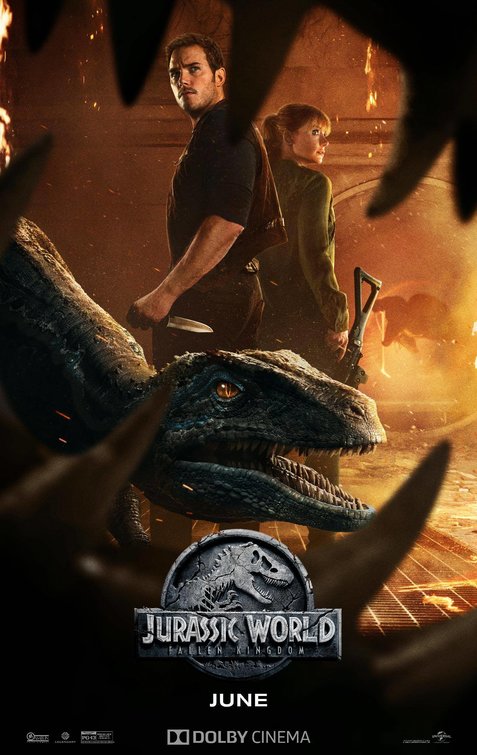 I will not argue that the films are generally quite pretty, with picturesque jungle vistas punctuated by dinosaurs so real looking you'll wonder how they made the special effects (it's all CGI at this point, by the way, so spoilers on that front). They're pretty, but they're shallow -- dumb monster movies that hand-wave away the science of the stories they're based on. Not that the science is all that realistic at this point mind you, with the whole conceit of taking DNA from mosquitoes in amber having been disproven years ago (DNA has too short a shelf life for that to work for dinosaurs). Plus, of course, there's the fact that dinosaurs were probably covered in colored feathers and weren't the straight up scaly beasts we imagine (and the movie depicts). Yeah... I have issues with these movies.

Still, it was with as close to an open mind as I could manage that I went into the theater from the fourth Jurassic Park film, the semi-reboot Jurassic World. It was... okay? It wasn't great, and while my wife certainly enjoyed its thrills, the movie never hooked me. And yet I continue with the series, ready to watch more dumb films because, hell, I do enjoy a cheap, dumb movie. And that's exactly the terms I would use to describe the new sequel, Jurassic World: Fallen Kingdom: cheap and dumb. What I wouldn't do is, in any way, call it a good movie. Just as my twelve-year-old self would have said (as would Jay Sherman on The Critic): it sucked.

This, the fifth movie in the franchise, concerns itself with the plight of the dinosaurs abandoned at the park after the Indominus Rex (the big bad dinosaur in the last film, and I'm only guess on its exact name) got loose, started killing people, and set off a chain reaction that saw the management of the entire park crumble. The park, the titular "Jurassic World", shut down and the dinos were left on their own to do as they like. Sadly, the island the park was built on (I think the name of it was Isla Nublar, off the coast of Costa Rica) is also an active volcano, and that volcano is about to go off and kill all the dinosaurs. That's where the (nominal) heroes of the last film, Claire (Bryce Dallas Howard) and Owen (Chris Pratt) step in. They team up with a group heading to the island to save the dinos, all so Owen can facilitate the successful rescue of Blue, the velociraptor he raise from birth.

So far, that's all plot the trailer for the movie showed us. What the trailer didn't tell us is that the island rescue (the thing we think is the whole plot of the film) is only fifteen minutes or so of the whole piece. What the film is really concerned with is what this team of hunters is up to. Namely they're capturing the dinosaurs so they can sell them on the black market for... reason? Also, they've been engineering a new, horrible raptor species and then need Blue, the most docile and trainable of the velociraptors, so that Blue can act as a "parent" for the new raptor and make it a compliant animal. But then, as always happens in these movies, all hell breaks loose. 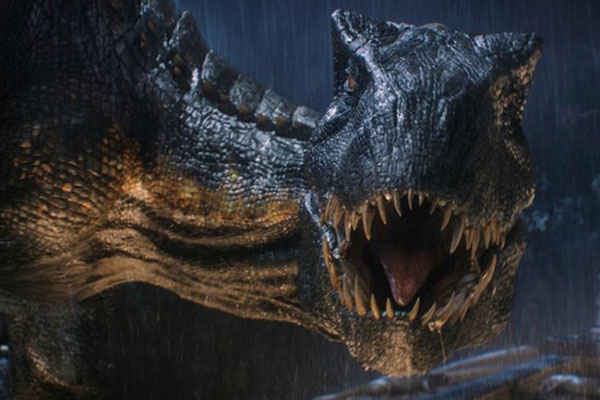 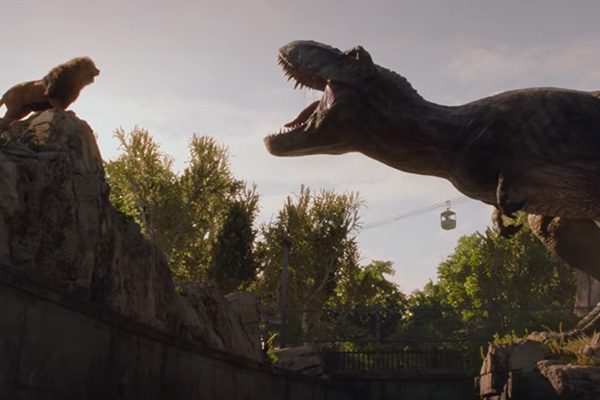 Let's start with the biggest issues I had with the movie first. The whole plot line about the black market dealers, honestly, doesn't make any sense. The dealers are selling to rich people that are willing to drop hundreds of dollars on a single dinosaur. Even if we accept their reasoning (bio-engineering, or security, or just because), why do they need to buy these things from a third party? There was an island out there up 'til a day or so ago, and any of them could have spent a fraction of the movie they're spending now on black market dinos to hire a team, send them out, and get any dino they want. The only security on the island were the dinos themselves, so you're seriously going to tell me no one had to idea to capture black market dinos before this movie, right when the island was about to explode?

And that island explosion is huge. When you see pictures of volcanoes going up, it's usually from a central source, a single mountain blasting and laying waste to the surroundings with lava and magma and hot ash. This island doesn't just have a central spire go up; it breaks up the whole island and becomes one giant ball of fire and death. Now, I'm not a vulcanologist but the size of Isla Nublar in the movie implies that the volcano in question is a giant caldera, the kind of volcano that were it to explode, dinosaur black market poaching would be the least of our problems. I'd be more worried about the volcanic winter we'd be plunged into for years and years afterwards.

Of course, that doesn't even take into account the issue a number of sites have pointed out: namely that it makes absolutely no sense for anyone to build a theme park on this island. We're talking a multi-billion dollar complex, one that's been literally build twice (once for the Park and again for the World), and in both instances no one said, "hey, maybe we shouldn't do this on an active volcano system the size of Old Faithful?" The bank had no problem giving them a loan for it, and all their investors were okay with it? Twice?! Somehow I really doubt that.

Not that any of the characters in these movies have ever proven to be all that smart. Everyone seems to know these are dangerous creatures (which, yes, is half the "thrill" in the thrill rides these parks provide), but even in this movie they always seem shocked with a dinosaur is sudden right on top of them, ready to eat them. The third time a flash of light vaguely reveals a dinosaur for a split second right before the humans turn and see nothing behind them, you'll have to wonder if the dinosaurs all have strobe lights attached to their heads, that screwing around with humans is baked right into their (totally fictional DNA). 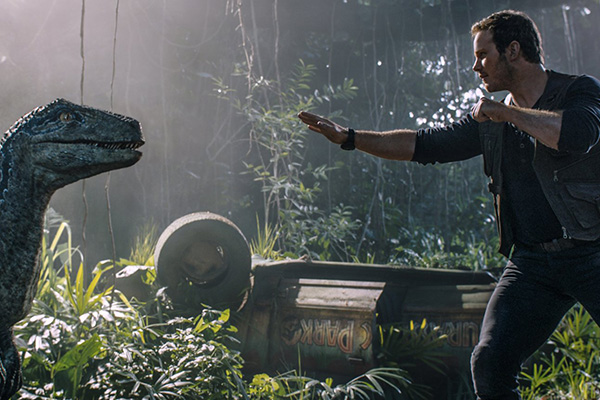 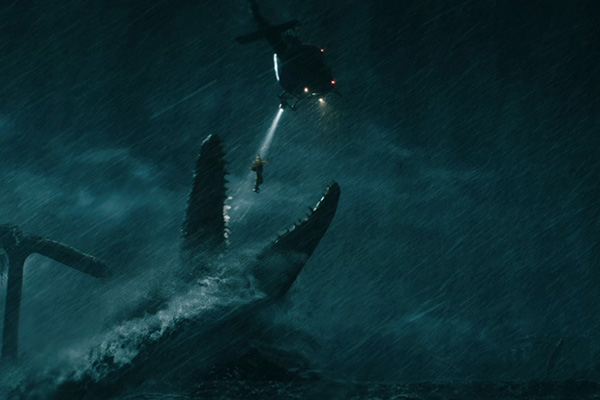 If it seems like I'm ranting a whole lot about minute details of the film instead of talking about the plot, that's largely because there's barely any plot to speak of. Claire runs a foundation that wants to save the dinosaurs (which makes absolutely no sense considering her character in the fourth film), and is approached by a rich group that wants to save them. Claire is the only character we know so far, and clearly there has to be an antagonist (because even the first movie didn't trust us to be afraid of the dinosaurs on their own, there always has to be a bad human in the mix), so we're already expecting the rich hunters to be the bad guys. Claire convinces Owen to join her, "you know, for Blue!" and then they all venture off to the island where they are immediately betrayed for absolutely no reason. The heroes are left for the dead on the island, manage to escape, and then infiltrate the hunter group to somehow bring them down.

That's it, that's the whole story and everything else is taken up with corporate, greedy posturing and a lot of dinosaurs being dinosaurs. Every character that isn't Claire or Owen is threadbare to an extreme (not that Claire or Owen are all that fleshed out, either), and the plot is so trite and expected that I was already detached from it in the first five minutes. Hell, my wife barely paid any attention to this movie and she actually likes these films.

Still, if all you want out of these movies are dinosaurs fighting each other, might I recommend... well, any of the Godzilla films from Toho. Those films provide more solid, consistent dino action than anything you'll find in Fallen Kingdom. This movie barely has any thrills, or comedy, or action, or reason for existing. It's just awful.

I really did not like Jurassic World and I figured any film could easily be better than that movie. Fallen Kingdom clearly proved me wrong. I don't know if anyone could actually enjoy this dumb movie, I just know that I couldn't. Do yourself a favor and pretend this one doesn't exist.