They've Got It All Worked Out

Speaking of rebooting (over in the Buffy reboot article I just wrote), here we come to a reboot that's actually done right: Ocean's Eleven. In this particular instance, part of what works about rebooting the Rat pack film of the same name (which I thought I owned and apparently need to go buy so I can talk about it sometime later) is that barely anyone remembered the film and those that did wouldn't have been all that upset over a remake forty years later (since, from everything I've heard, the original is pretty crappy). This is a case where the basic concept was still good (a bunch of cool people pulling off a cool caper) but the filmmakers had the freedom to do whatever they wanted without feeling beholden to what came before. 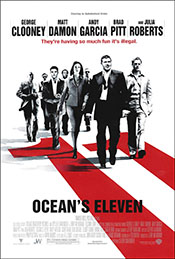 Of course, I wanted to talk about this movie not only because it was a reboot (and I often bemoan reboots on this site, which, ironically, has been rebooted a couple of times) but because I've already mentioned it a couple of times in the articles about Ant-Man and its sequel. Seemed like it was time to come back and actually talk about a series of films that defined (and continue to define) caper flicks.

Ocean's Eleven is the story about a man, Danny Ocean, who had a really bad patch a few years back. A career criminal (who seems to only hit those jerks with too much ego and way too much money), Danny got himself caught during a bad job (although we never find out the details of that score and how it went wrong), went to prison, and then lost his wife when she filed for divorce. Years later, he's out of prison and getting his old crew together to pull off the biggest score of all their lives: robbing the vault of three connected Las Vegas casinos (to the tune of $160 Million) and screwing over the guy that ended up with Danny's wife in the process. They've got a plan, the suave style, and all the tricks they need to pull off the caper. They just have to make it happen.

It's hard to talk about Ocean's Eleven without discussing, first and foremost, how cool it is. But that I don't mean it's loaded with huge action or big explosions (cool in the "whoa" sense of the term). No, this is a cool that leaks Old Vegas style, cool and collected, suave and stylish. Every moment of the film breathes with slick production, confident moves, and a touch of class. This is, hands-down, the classiest caper you'll ever see.

Anchoring the movie are two stars, George Clooney and Brad Pitt. Clooney, playing Ocean here, had already proven is suave chops in the TV series ER (the NBC medical drama from the 1990s and not the bad sitcom from the 1980s of the same name... that also starred Clooney, in fact), playing a confident, awesome doctor that stole all his scenes. Although he was credited with killing Batman when he starred in Batman and Robin, but this role redeems him. Clooney is nothing but effortless confidence, a cool and collected center that the film operates around. 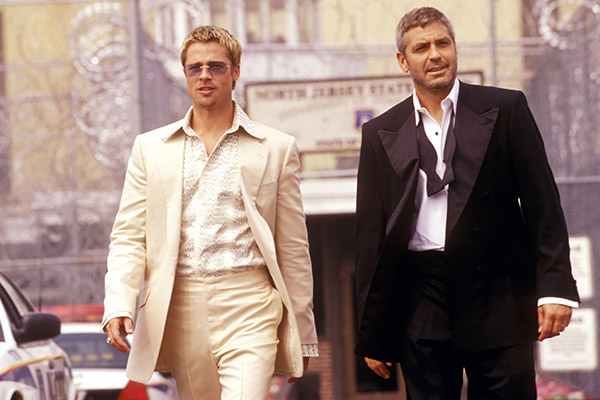 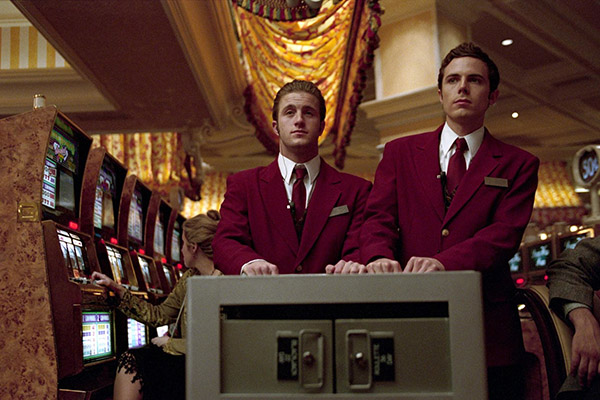 At his side is Brad Pitt as Rusty, the guy in on every scheme and the only person Danny Ocean truly trusts. In most movies I've seen him in, Pitt has this anxious quality to him (such as in Twelve Monkeys and Fight Club), a role he could turn on the up the tension of his role. Even if more comical movies, like The Mexican there was still a heightened, manic quality to his performance. Here, though, Pitt turns that part of his personality off and exudes just as much cool, collected charm as Clooney does. The film wouldn't work without Pitts effortless style complimenting Clooney, and the two make a great team.

Of course, there's more characters in the film than just to two leads (11 leads, to be exact, just by the title of the film). We have great performances from a whole crew of stars, each with their own parts to play and functions within the crew. If there's nit I'd pick is that there's only three people of color in the main cast (Bernie Mac, Don Cheadle, and Shaobo Qin), and just one woman with a major role (Julia Roberts). Many of the roles could have been played by a man or woman, black or white, and it wouldn't have changed many of the scenes at all (only the race of Bernie Mac's character is mentioned at all, and he's the one that brings it up purposefully in a specific con he's part of). The all-female Ocean's 8 (which we'll cover eventually) does a better job but, going back, nearly two decades later, it's noticeable.

But then, also noticeable is Casey Affleck here, who turned out to be a real creep in his later movies (with a few settled sexual harassment claims against him), so certainly as times change it's easy to find faults with the casting of any movie.

While the stars are the on-screen draw, the real talent on display is that of director Steven Soderbergh. The movie works with such effortless charm, the heist coming together and every piece falling into place, because of the confident talent behind the camera. If not for Soderbergh's eye, the scenes wouldn't move together the way they do. Without his planning, the heist wouldn't have the rhythm and flow it does. Without Soderbergh directing, the stars wouldn't have given nearly as good of performances as they did. A great director can make a movie sing and Ocean's Eleven is a heist-opera. 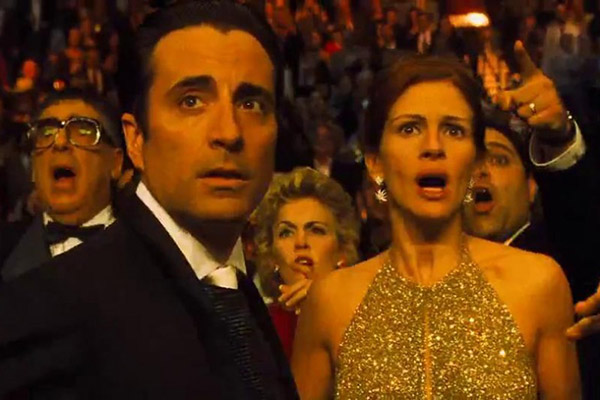 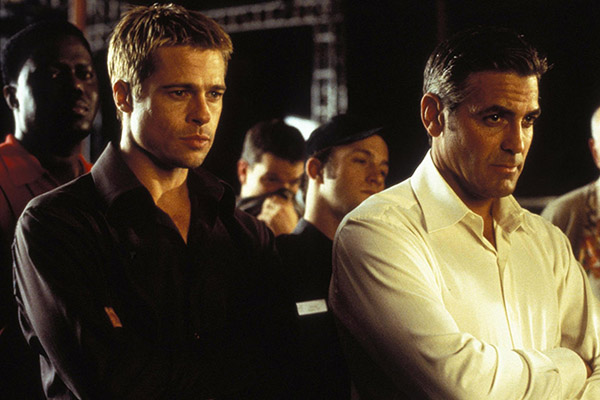 The film just leaks style from every cell of footage. It's fantastically shot, well-staged, well designed, and well-acted. Plus, it's just funny. It's a heist film that works as a comedy, and hang out film where all the cons pull off a crime in the process. It's the kind of movie that sucks in along it charming wake, makes you laugh, and before you know it you're rooting for the criminals to get away with their big score (mostly because no one other than the sleazy casino boss gets hurt in the process, and even he just loses all that money). For a crime film, there's absolutely no violence, just jokes, style, and charm.

I've gone back and watched Ocean's Eleven more times than I can count. It's just such a fun movie, one that sucks you in and brings you along for that cool Vegas ride. Heists have never looked this good, and Ocean's Eleven will probably live on for a long time as the landmark film of the heist genre.