Let's Do It For Reuben!

After watching Ocean's Twelve in theaters, I will admit to being more than a little disappointed. Even now, going back for these reviews, my opinion of the movie hasn't changed much -- it's amusing in places, but very flawed. Worst, it just doesn't feel like an Ocean's movie. It was too loose, too shaggy, and too European (for the sequel to a film about Vegas thieves stealing from a Vegas casino). 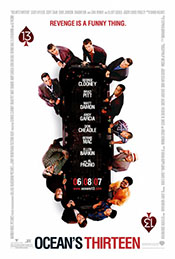 Clearly I wasn't the only person to have these concerns about the second film in the series as the producers went back to the drawing board and, for the third film, made a much more traditional Ocean's film. That's not to say it's just a retread of the original film -- It certainly puts its own spin on the material and comes up with a new story to tell within a familiar framework. More importantly, though, the movie is fun (something the second film was lacking for much of its runtime).

Set an indeterminate period of time after the second film, Ocean's Thirteen sees the band of thieves get back together to aid their fallen (due to a heart attack) friend, Reuben, after his casino is stolen out from under him by Willy Bank, an under-handed Vegas casino owner. With Reuben out of commission, and barely alive, the boys decide to ruin the opening of Bank's next Casino and force Bank to go bankrupt as revenge. What then follows is another slickly produced heist, this time with the guys conning their way into the casino/hotel, hacking the various games, and finding every way they can to tip the casino in their favor for one night.

After the abysmal Ocean's Twelve it was nice to see the guys firing on all cylinders for Ocean's Thirteen. Part of why the original film worked was because we didn't have to see the guys plotting out every detail of the heist before it happened -- Ocean's Twelve had the guys on an off-foot and forced us to watch them plot, plan, and scheme the whole time. Here, though, after the initial setup of the movie the plot jumps six months ahead to the point where the guys have done most of the planning. Sure, not everything goes accordingly to plan (which helps to up the dramatic tension) but most of what we get to watch are the schemes already in motion, the fun action and quick cons that keep the plot moving.

Ocean's Thirteen is also a prettier, better shot movie than the second film in the series. The film is done as a throw-back to the 1960s films of old (with prominent name drops to Sinatra, who starred in the original Ocean's 11 back in 1960). There's a graininess to the film stock, and a number of prominent screen transitions and scene changes, that make it feel like director Soderbergh really wanted to pay homage to old Vegas of yore. Still, it's a Soderbergh movie so despite all the little old-school touches, it's still well filmed with snappy editing, slick shots, and plenty of eye-candy moments (like a tense discussion between Bank and Ocean filmed under deep, red lights). 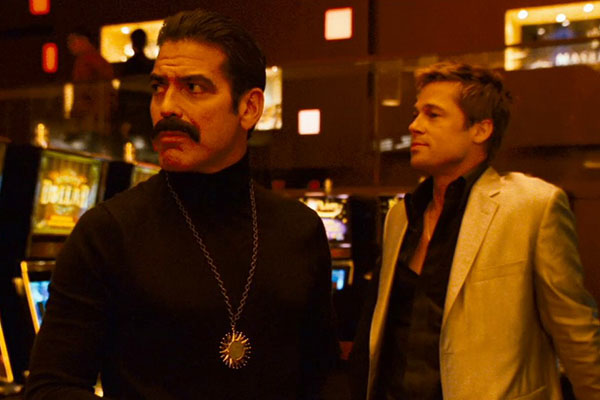 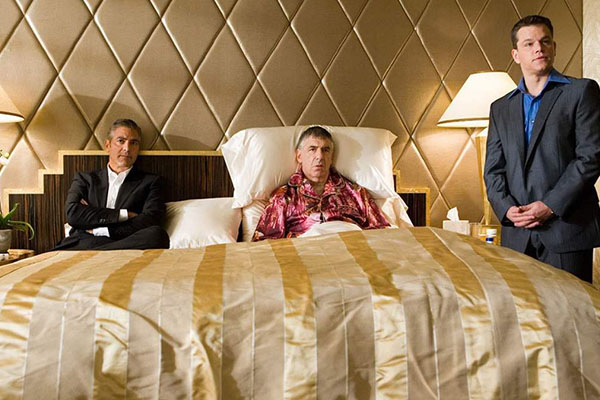 The cast is, once again, uniformly good. Prominent are, of course, Clooney and Pitt who both feel like they just showed up to hang out with the guys, crack wise, and have a good time. Neither of them are pumping nearly as much charisma into their performances this time as they were in the first go round, but that might be a consequence of the story as well as an undercurrent that the world is supposed to be moving on from these two aging con-men. A sub-plot of the movie is really how these two have become to analog in a digital world and that, maybe, it's time for a younger generation to take the lead -- namely Matt Damon, who has a larger role in this movie, nearly at equal status with Pitt and Clooney.

Sadly, while most of the cast is back in top form and are all given prominent roles to play, the two actresses from the previous films, Roberts and Zeta Jones, were excised from this flick. A single line is given, "it's not their fight," to explain it away, but it does make the film feel like even more of a boys-only club than before. This feeling isn't helped by a poorly thought-out subplot where the Abigail Sponder character (played by Ellen Barkin) is conned into a love-scam by Matt Damon's Linus. She's called a cougar, given (effectively) a roofy, and it's all played for laughs. I don't remember being offended by this subplot when I watched in the theater 11 years ago, but I had to admit that it was an uncomfortable subplot on second viewing, and when coupled with the fact that Barkin plays the only prominent female in the film, it throws the gender make-up of the movie into a starker light.

And then there's the big climactic heist itself. Much of the movie is all setup for the main event, with a lot of little cons and small schemes going on. The big event, though, is part of the last act, but it's actually over surprisingly quickly. The whole scheme hinges on a three-minute window where the guys can bet big on every game, win bigger, and then walk away. While this is, in theory, an interesting way to play with the plotting of a heist (technically they didn't steal anything, they won it), in practice this means the actual heist itself is over really quickly. Too quickly. It's fun to see while it's happening, but after so much build up, the final plan in action feels like a bit of a let down. 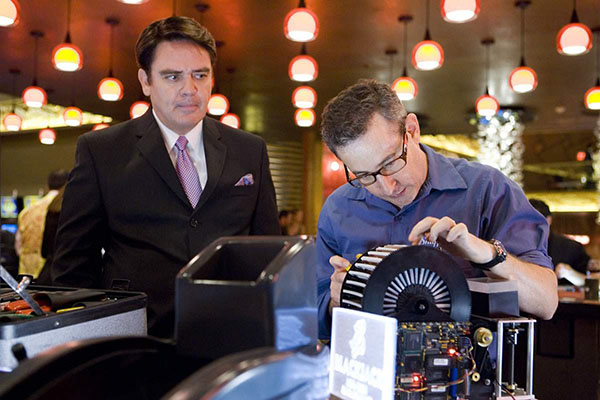 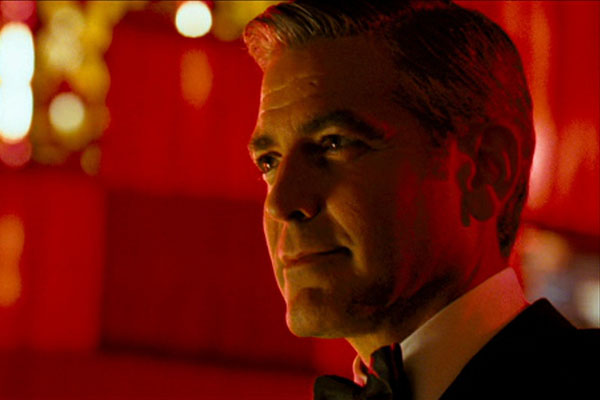 Still, despite some glaring flaws, Ocean's Thirteen is a much better flick than its direct predecessor. It's still a little shaggy, the pacing a tad off, and there is that one questionable plotline that I personally would have cut if I had my choice. On the whole though this film was a good sequel to the original and a fun way to finish out the main series of films.

Ocean's Thirteen came out in 2007. If there were any plans to do further sequels in the series, those were scuttled when cast-member Bernie Mac died in 2008. All the guys associated with the Ocean's series said they weren't interested in making another film without their friend and so the film series was quietly put to rest.

More recently, though, a female-lead spin-off, Ocean's 8 was released (and which, soon enough, I will go see and review for this site). It's done well enough in theaters that further sequel could be expected, leading us to a point where we could, in theory, have an Ocean's 9, Ocean's 10 and then, maybe, another, different Ocean's 11. That will be amusing to see if it ever happens.