On the Fifth Day of Die Hard, My True Love Gave To Me...

A Relaxing Day on the Mountain

There really is no way to look at the action genre from the 1980s and 1990s without noticing that Die HardThe 1980s were famous for the bombastic action films released during the decade. Featuring big burly men fighting other big burly men, often with more guns, bombs, and explosions than appear in Michael Bay's wildest dreams, the action films of the decade were heavy on spectacle, short on realism. And then came a little film called Die Hard that flipped the entire action genre on its head. changed the game. The likes of Arnold and Sylvester ruled the Box Office for years with their Commandos and Rambos, but it was one down-on-his-luck, New York beat cop that redefined the genre. Our went the big, burly dudes who had dominated theaters; now anyone could an action hero, and the realism that Die Hard brought trumped the muscle-y male fantasy of the previous decade. 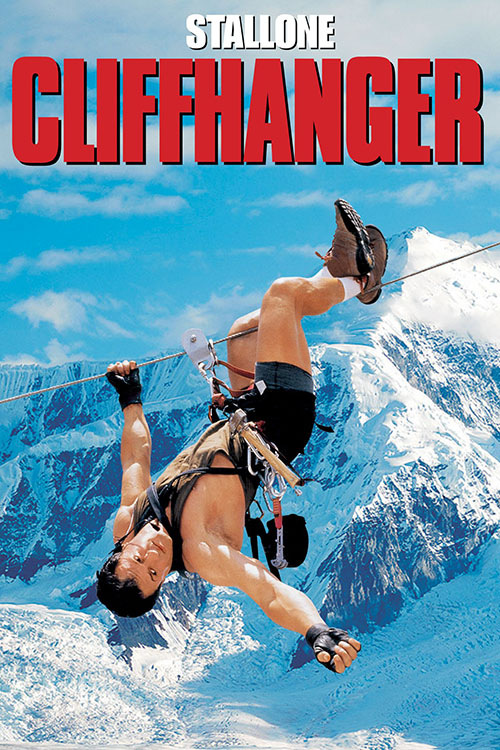 Not that the action stars of the bygone era were done making films. Arnold and Sly (among many others) would go on to release several more pictures of varying quality (and popularity) over the years. The stories, though, were different. When even Sylvester Stallone has to make a Die Hard, as he did with 1993's Cliffhanger, you know the sea has shifted. No longer could he barrel through a jungle with his machine gun blazing. Now he had to be a soulful star who took damage and acted mortal. This wasn't a Sly film from the 1980s. This was a post-Die Hard adventure and it wore its influence on its sleeve.

Cliffhanger is, in essence, "Die Hard, but on a mountain". In the film Sly plays Ranger Gabe Walker, who used to work rescue in the Rocky Mountains. After Gabe is unable to save Sarah (Michelle Joyner), the girlfriend of Gabe's best friend Ranger Hal Tucker (Michael Rooker), Gabe takes it hard, quitting his job and leaving the mountains altogether for nearly a year. He returns to try and get back his best gal, Ranger Jessie Deighan (Janine Turner), but the mountain water runs through her veins and she won't leave with him, rejecting his proposal to move out of state and be happy far away from the mountain air.

Gabe goes back onto the mountain one last time to help Hal in a rescue. A group of people were having a health emergency and needed saving way up in the mountains. However, as it turned out, that story was a ruse. In reality the group were international money thieves, led by Eric Qualen (John Lithgow), who had just hours earlier, attempted a theft of $100 Mil in thousand collar bills from a U.S. Treasury plane. Assisted by (now former) Treasury Agent Richard Travers (Rex Linn), the plan was the highjack the money mid-flight and escape scot free. Sadly the plan went off the rails, the money was lost in the mountains, and the terrorists' own plane went down. Now they need a couple of mountain experts to help them find the money and get out of the Rockies before everyone freezes to death. It's a battle of wills, against the cold of winter, in this (not really) high-stakes adventure.

The idea of a Die Hard is that the action hero at the center of the piece, whatever character they may be, could pass for any one of us. Bruce Willis was great as John McClane (especially in the first Die Hard), but there's no doubt he was an everyman. The trick for the action heroes of the earlier era, though, is that they weren't everymen. Arnold and Sly were giant, burly guys with more muscle on them than a whole butcher shop display case. They are not, in any sense of the word, everymen. When McClane gets the shit kicked out of him by a terrorist you believe it because he's not a guy built for taking out waves and waves of goons without any kind of visible damage to his own person. Sly doesn't have that same benefit. He made his name as Rambo, mowing down dudes like it was nothing. When you put him in a Die Hard-style film it changes the context of the adventure. 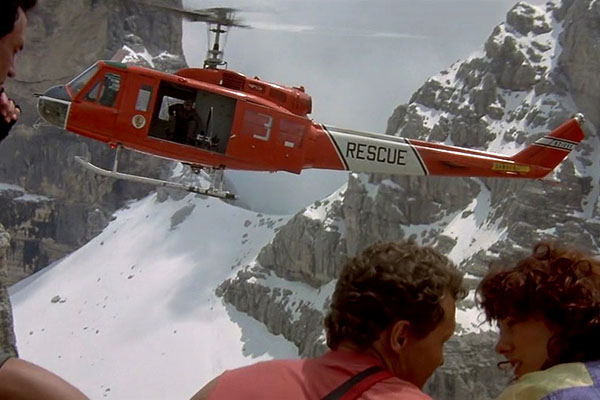 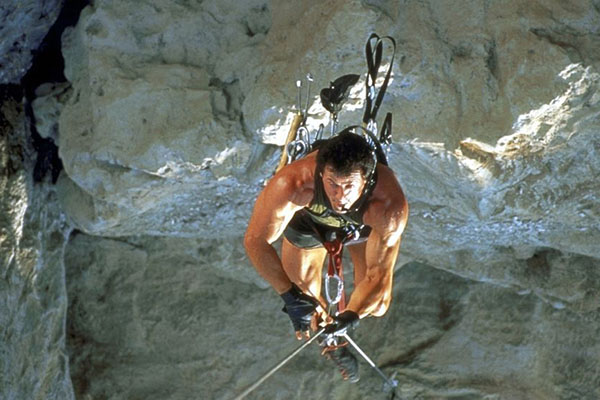 I thought on this quite a bit while watching <Cliffhanger because the film wants us to think of Gabe as an everyman but then it has Sly in that central role, all however many hundreds of pounds of rippling muscle the actor was at the time. Any time some thin and reedy goon came after Gabe and kicked is ass, I scoffed. Sly should be able to rip his arm off at the joint, not take a beating from such a tiny, scrawny guy. I didn't believe Sly any time he had to do action clearly designed for a John McClane type... but then I also didn't believe him when he was climbing a mountain, either. His body type just isn't right for this kind of work.

The character I did believe: Rooker's Hal. Rooker is the exact kind of action perfectly suited to be in a Die Hard. He's not super strong, or particularly invincible. The actor excels at playing sarcastic everymen, and it's honestly a real tragedy he didn't get to be the lead hero in his own Die Hard-style franchise because I think the Rook really could have pulled it off. Instead he sits second banana to the unbelievable Sly in this half-baked adventure.

Not helping matters is that there's an air of artificiality to all the stunts and action in this film. The Die Hard films (especially the original trilogy) used a lot of practical effects (and few composite shots) to sell the reality of the film. You felt like you were really in an office building, or at an airport, or roaming across New York, right beside McClane the whole time. Cliffhanger, though, rarely feels like it was shot on a mountain. Too often is feels like sound stages, or composite shots against a green screen, with very feel real moments up in the mountains. Nothing ever feels true to the setting making it hard to invest in what's going on.

But then, the heroes are all able to survive way too much without taking damage. Sly's Gabe is able to survive climbing a mountain for hours in just a t-shirt and work pants despite it being the middle of winter. No frost bite, no other damage. He also survives a prolonged dip in a iced-over river, again without any kind of hypothermia or frost bite. Guys shoot at him with machine guys and constantly miss. Even when he does get his ass kicked, the damage all but disappears by the next shot. The man is an immortal superhero. 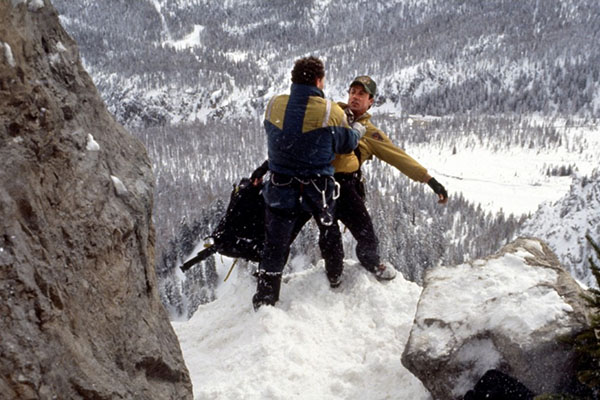 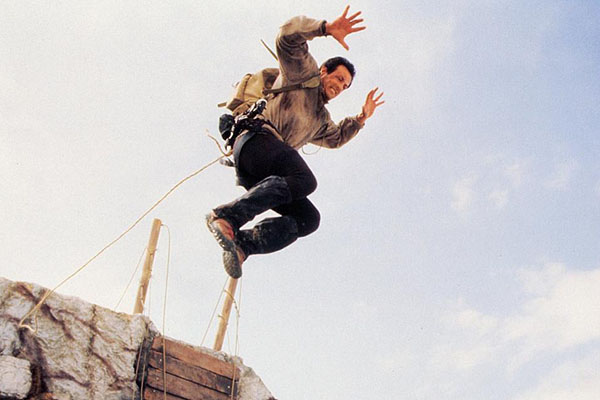 The villains, meanwhile, feel like they came out of a bad James BondThe world's most famous secret agent, James Bond has starred not only in dozens of books but also one of the most famous, and certainly the longest running, film franchises of all time. film. John Lithgow has a laughably bad European accent. It's pretty clear he enjoyed the hell out of his time as a villain but his character's portrayal leaves a lot to be desired. He's still better than all the goons he works with, most of whom remain nameless and unmemorable throughout. I did like Linn's Richard Travers, the one character in the film that seems to realize how stupid everything is and who, eventually, gets fed up with everything going on, but that was one sole bright spot in an otherwise cruddy movie.

The things that's most shocking to me is how successful this film was at the Box Office. Against a budget of $70 Mil (a massive number for what should have been a low-key Die Hard film) the movie pulled in $255 Mil, proving that Sly Stallone plus the Die Hard formula was a heady mix for audiences. And yet, end of the day, this film didn't predict the continuing success of the Die Hard formula. If anything, it illustrated that taking the core formula and stretching it out would only lead to improbable supermen that would ruin the fun of the franchise. We eventually saw that in the main series, with Live Free or Die Hard and A Good Day to Die Hard, but those seeds of despair were already starting to grow here, in the lackluster Cliffhanger.

In the end, maybe the real lesson is that not everyone should get their own John McClane moment. Not everyone is meant to be an everyman.