On the Third Day of Die Hard, My True Love Gave To Me... 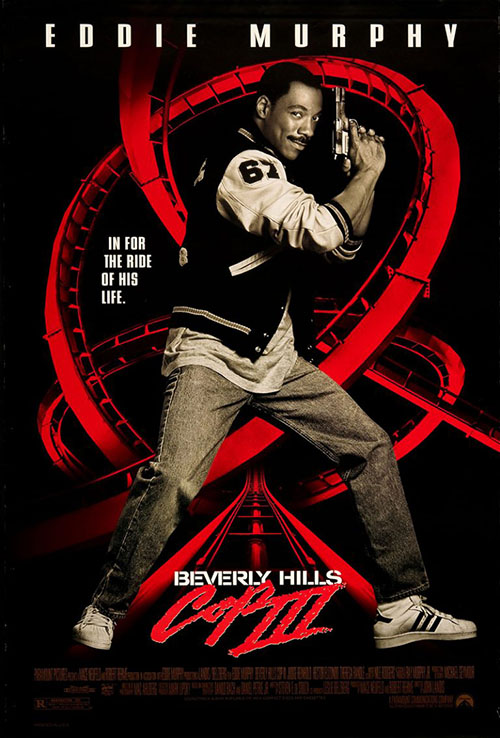 Look, the concept of Beverly Hills Cop didn't really lend itself to a sequel. Getting a cop to chase a case from Detroit to L.A. works once because, frankly, how many times can a case start in one town and end in the other. Doing it twice was already stretching the concept, and while the second film had a novel way of getting the setup to work (Axel goes to L.A. on a quest for revenge), that wasn't really a well you could go back to. There were only so many ways to get the cop in Beverly Hills. The only other idea I could think would be to reverse the formula, maybe by sending the Beverly Hills Cops to Detroit for their own adventure, but even then that's pretty threadbare and stretches credulity. While we can forgive the second film because at least it tried, this third film gets no credit. It just goes to the same well again because it that's all this franchise has at this point.

Thus we have, in Beverly Hills Cop III, Axel heading to L.A. yet again, on a quest for revenge (again), this time to chase yet another group of high-priced and highly-paid terrorists. Of the three films this is the closest this series gets to a proper Die HardThe 1980s were famous for the bombastic action films released during the decade. Featuring big burly men fighting other big burly men, often with more guns, bombs, and explosions than appear in Michael Bay's wildest dreams, the action films of the decade were heavy on spectacle, short on realism. And then came a little film called Die Hard that flipped the entire action genre on its head. -- bad guys dressed up like Euro-trash assholes on a quest to steal a bunch of money, killing anyone that gets in their way because they can -- but that doesn't make it any better. The series is running on fumes and Axel doesn't have much spark left for this third iteration of the formula.

This third film, like the previous two, starts in Detroit with Axel (Murphy) on one of his many cases. This time he's conning a group of car thieves. He has a raid setup so the cops can raid the car thieves at their garage, catching them red handed. Only problem is that another group of bad guys had gotten there first; the car thieves stole a van for these other bad guys, and once in possession of the truck, the new bad guys kill all the car thieves. Axel and his crew wander in at the wrong time and get caught in the crossfire. People get shot, Axel's boss Todd (Gilbert R. Hill) is killed, and the bad guys get away. Axel is then stopped by Secret Service Agent Steve Fulbright (Stephen McHattie) who warns Axel off the case.

Of course, Axel doesn't listen to anyone but Axel Foley, so when evidence at the crime scene links the bad guys to Wonder World (think Disneyland, but without Disney's approval), Axel decides to head to sunny California one more time to chase bad guys and get some revenge. He teams up with old friend Sergeant Billy Rosewood (Judge Reinhold) and new pal Detective Jon Flint (Hector Elizondo) to figure out what's going on at Wonder World and just how big this conspiracy really is. 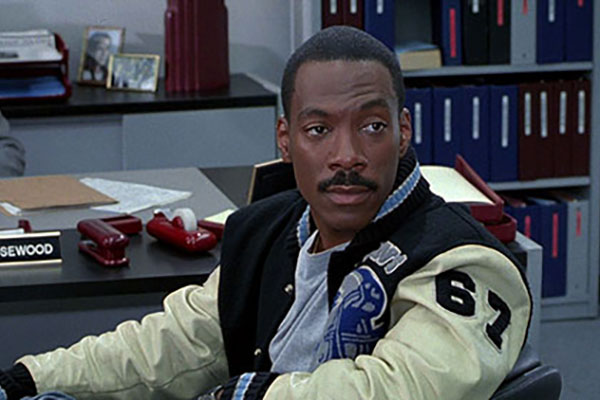 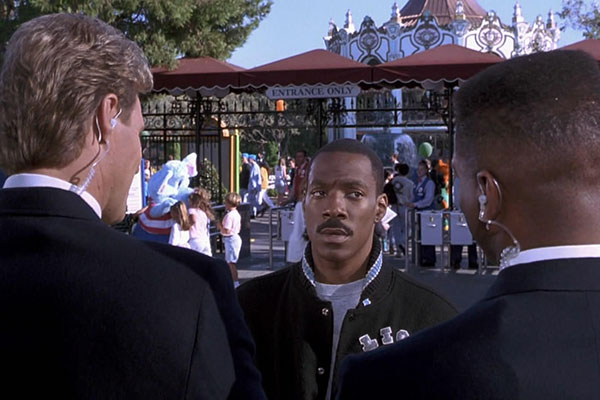 The concept of Beverly Hills Cop was predicated on a simple "slobs vs. snobs" mentality. Axel was a Detroit cop, a slob, who somehow knew better and knew more than the "snobs" in Beverly Hills. This allowed for some fun to be had as the down-and-dirty Detroit cop could live a lavish lifestyle in L.A. while cracking jokes and catching bad guys. It mad for a fun and light film that kept the focus squarely on what worked: Murphy's charismatic comedy.

The issue with Beverly Hills Cop III is that it doesn't have any of those qualities at play. Instead of Axel enjoying the high life, he spends most of his time at a low rent theme park. Instead of cracking a bunch of jokes and getting into silly antics, Axel largely plays it straight, becoming a generic action hero. And instead of actually having any fun, Axel just runs around a lot. There's none of the fun or enjoyment in this film that made the original work. The second film may have been a soulless retread but this movie is just soulless.

It doesn't help that the film hardly spends any time developing its primary location of the characters within it. Wonder World is supposed to be this film's version of Disneyland, but the movie doesn't really invest the time to make us believe that. We never get a sense of magic or, well, wonder for Wonder World. It just looks like a cheap theme park (which it was as most of the film was shot at Paramount's Great America). The movie uses the setting as little more than set dressing, and you're left wondering why this place was chosen as the setting for an action film.

The same can be said for Wonder World's creator, Uncle Dave Thornton (Alan Young). The movie has the characters react to him as if he's a Walt Disney-esque figure, but we never see anything he's done outside of Wonder World. They tell us he's a great man, but in practice he just acts like a doddering fool who lost control of his own theme park. The move needed to make us believe in Uncle Dave just like it needed us to believe in Wonder World. If it could have done that it then might have been able to contrast the setting of this magical theme park against the action and violence going on within it. 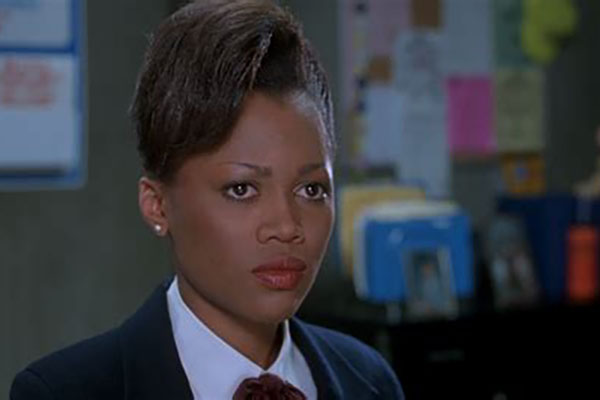 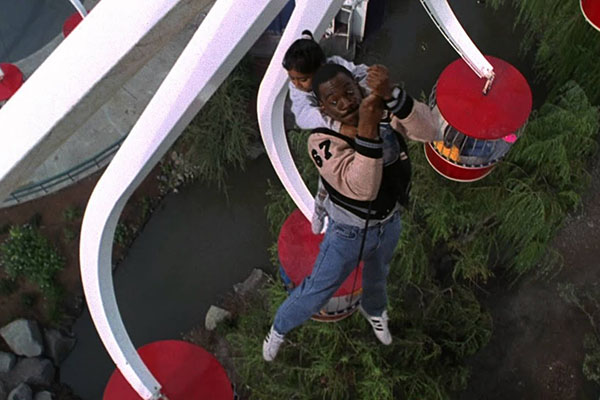 The big issue is that nothing really feels real here. You watch the movie and instead of feeling like "Die Hard but in a theme park" it looks more like "Axel Foley running around on some sound stages." The movie never creates a real sense of the world, instead coasting on the idea that we'll fill in all the details about this world ourselves because we all know Walk Disney and Disneyland. Who knows, maybe there was a draft of the script that gave more context and development to the world and the characters, but it's not in the final cut of the film and that damages the movie.

What also hurts, though, is that Murphy really doesn't seem engaged here. Gone is his charismatic performance with mile-a-minute line delivery. He's a generic action hero here, just going through the motions of an Axel Foley adventure instead of actually having Axel Foley. Murphy needed to bring his A-game for this character, to keep the film lively as all the scenes rest on his shoulders. Instead he coasts here; this is not the Murphy from the first film, who was young and hungry for a big, star-making franchise. This came out ten years later, when he was an A-list star and could do anything he wanted. Apparently what he wanted was to cash a paycheck and have a vacation in California.

Eddie Murphy is a great actor, when he brings his charisma to a role. His films can be supremely watchable when the elements line up and the star gives it his all. Beverly Hills Cop III is not that kind of film. Instead of having an engaged star with solid script backing him up we get a tired story for a genre that was already feeling played out, in a franchise film delivered years after everyone stopped caring. Maybe there was a way to make a Beverly Hills Cop sequel that was good, but this was not the film that could do it.