On the Fourth Day of Die Hard, My True Love Gave To Me...

It's hard to overstate the impact that Die HardThe 1980s were famous for the bombastic action films released during the decade. Featuring big burly men fighting other big burly men, often with more guns, bombs, and explosions than appear in Michael Bay's wildest dreams, the action films of the decade were heavy on spectacle, short on realism. And then came a little film called Die Hard that flipped the entire action genre on its head. had on the action genre. Before that 1988 film came out, the action genre was defined by big, burly dudes with impossibly large muscles running around like invincible war machines. After Die Hard the burly boys were out and suddenly anyone could be an action star. A drunk and disorderly flatfoot? Sure. A soccer mom with an unknown past? Why not. Boys at a boarding school? That's no more far-fetched than anything else the formula was attached to. 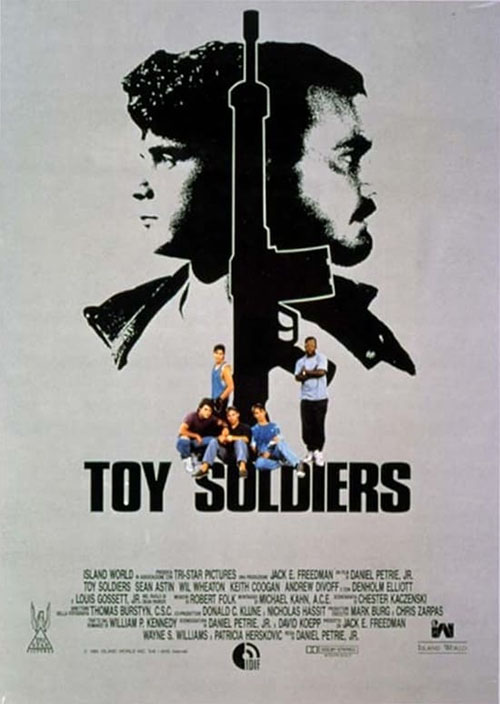 Released in 1991, Toy Soldiers (based on the book by the same name) essentially applied the Die Hard formula to a all-boys boarding school setting. That's just the magic of the formula; all you have to do is say, "it's like Die Hard but at a..." and whatever noun you insert at the end naturally slots right in. All you have to do is sprinkle in some terrorists and your chosen location and you've got all you need for an action adventure. Of course, whether or not the film actually works is another matter altogether.

I doubt anyone had Sean Astin as the next John McClane, but that's the role he's slotted into for Toy Soldiers. Astin plays Billy Tepper, the bad boy son of a construction magnate, a boy that has managed to get himself kicked out of three boarding schools so far before getting sent to the Regis School in Virginia. Regis is headed up by Dead Edward Parker (Louis Gossett, Jr.), a tough by fair educator who wants nothing more than to see Billy and his group of friends -- Wil Wheaton as Joseph "Joey" Trotta, Keith Coogan as Jonathan "Snuffy" Bradberry, George Perez as Ricardo "Ricky" Montoya, and T.E. Russell as Henry "Hank" Giles III -- actually graduate without causing too much trouble. Billy, though, love to push against authority, selling alcohol to other students, sneaking onto porn sex lines, and causing all kinds of trouble whenever he can.

Billy's anti-authority streak is put to the test, though, when terrorists take over the Regis School. The terrorists, led by Luis Cali (Andrew Divoff), want just one thing: the release of their leader, Enrique Cali (Jesse Doran), from the American prison he's incarcerated within. The U.S. Government, of course, doesn't deal with terrorists, leading to a tense stand-off between the younger Cali and his men as they control the school grounds and the 92 boys trapped within. It's up to Billy and his friends to find a way to save their fellow students and, just maybe, strike a blow for freedom (or something).

When you watch Toy Soldiers you can kind of understand that the production team was going for. Die Hard had been a huge movie just three years prior (with a successful sequel that had come out just a year before Toy Soldiers). Everyone in Hollywood wanted "their Die Hard". That coupled with Astin's casting also gave the film an air of "grown up Goonies", tapping into a whole crossover market for the film. Except, not really, because this film doesn't really manage to find the charm or wit of either of those films. 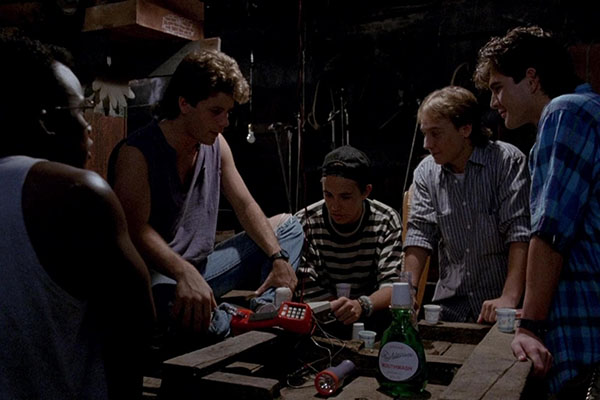 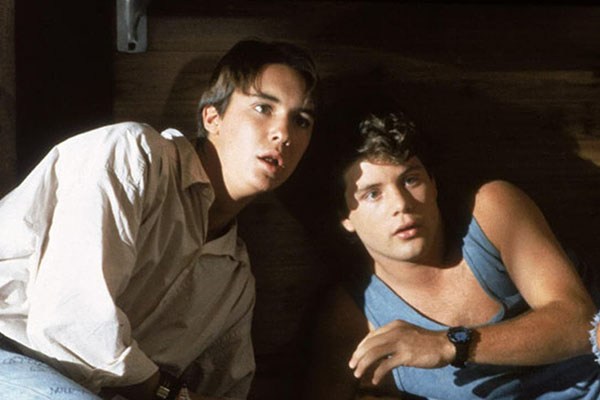 Part of the problem is that the kinds in the movie aren't action stars. Despite the producers thinking they could make a "Die Hard at a boarding school", teenage (and young adult) actors aren't as good as trained action stars. While the terrorists, played by actual adults, look credible in the film carrying around guns and being bad-asses, there's an air of kids playing make believe among the rest of the young cast. It's very much a "Goonies R Good Enough" vibe despite the much more mature subject matter. The action is passable at best, hokey at worst.

That's not to disparage the young actors too much. They were likely hired for their dramatic acting chops and, in that regard, they succeed. When the film is able to focus on the tension of their situation, the struggle as they deal with terrorists invading their territory, the film works really well. The issue is that it uses the action to resolve the drama (and the character development) when the film would have been better served focusing on the drama itself. The two halves of the film -- dramatic story of misfits at a boys school vs. a tense action thrill ride -- never really gel together. One is lost for the other, leading to a film that's weaker in both regards.

It sucks, actually, because the film has a really good vibe it gets into in its first act. The play between Astin's Billy and Gossett, Jr's Dean works really well. They're foils for each other, and the film starts to get a good pace to its story as it has these strong-headed characters bounce off each other. You get the sense there's a story about these two, a kind of more mature Animal House where the Dean is actually rooting for his students to grown up and mature, that was sidelined for the action that comes in the later acts. I think I would have liked to see that drama instead.

Frankly, the terrorist plot line is nothing special, which does the film no favors. A terrorist taking over a single location so he can free his leader is a story we'd just seen a year prior, in Die Hard 2. If this film had come out first, maybe it would have seemed fresh, but just one year later it felt like a retread. Plus, beyond wanting to free the elder Cali, Luis's character has nothing going for him. He's a generic (if charismatic) leader with a group of faceless, nameless goons backing him up. There's not of the dynamism of Hans Gruber from the first Die Hard. Cali is little more than a generic villain from any one of a number of late 1980s and early 1990s action films, and that weakens the whole back half of the film. 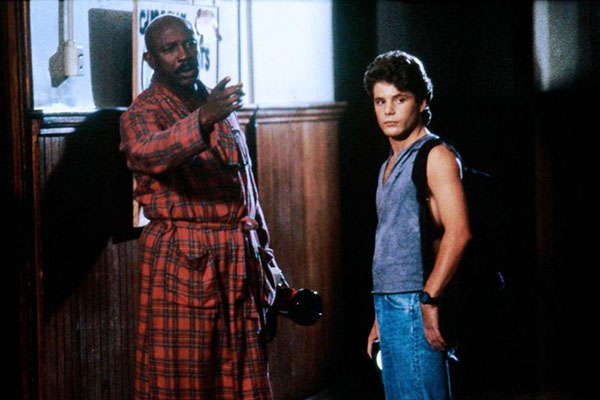 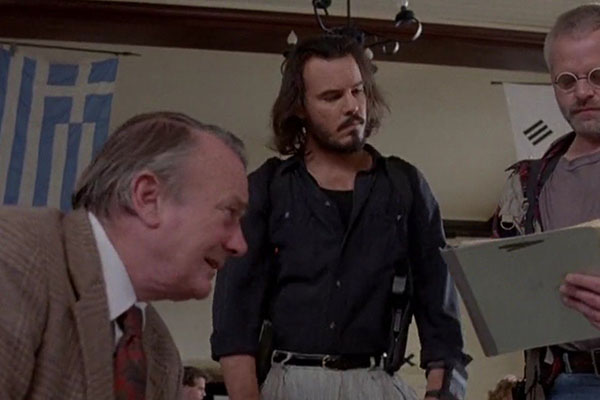 I think somewhere within Toy Soldiers is a good, even great, film. Maybe there's a way to blend the action story with the drama that preceded it, especially if more time is spent developing the bad guys as well as our misfit schoolboys. That film isn't on the screen and I wonder if it even existed in the screenplay. You might have to go back to the original book to find something substantive enough to carry the weight of this story. Whatever the case, while 1991's Toy Soldiers has some solid performances, and a few good ideas, none of it comes together into a truly satisfying whole, and that's a real shame.