Blasting Back into the Network

It's not an exaggeration to say there are a lot of Mega ManIn 1987, Capcom released Mega Man on the NES, a game featuring a blue robot that fought other robots and took their powers (so that he could then fight other robots with those powers, and on, and on). The series went on to release over 50 games in 30 years and become one of the most famous gaming franchises in the world. games. The series became a massive hit for Capcom back in the day and, through diversifying the character out just about as hard as NintendoSince 1983 (with the release of the Famicom gaming system in Japan), Nintendo has proven to be a gaming company dedicated to finding what gamers want, even when the gamers don't know it themselves. From dual-screen systems, to motion controls, to convertible home console/portable consoles, Nintendo regularly proves that the weirdest innovation is exactly what the gaming community needs. diversified the Super Mario SeriesHe's the world's most famous plumber and the biggest face in Nintendo's stable, a character so ubiquitous you already knew we were talking about Mario even before we said his name., we ended up with multiple Mega Man sub-series as well as even more spin-offs. It's fair to say that, when it comes to mascot game series, Mega Man stands right up there with Super Mario and Sonic the Hedgehog. 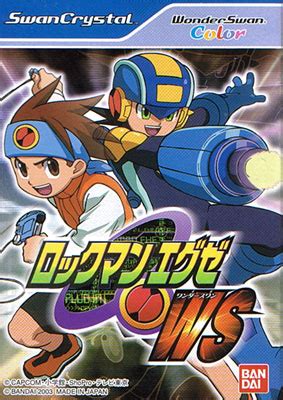 Late in the Blue Bomber's run, Capcom (and overseer Keiji Inafune) hit upon an idea that gave the series sudden new life: they rebooted the franchise, moving away from the idea of robots fighting robots, and moved it to he Internet for "net-navis" to fight other "net-navis". This, plus adding in RPG elements and putting the focus much more on story and exploration, this new series, Mega Man Battle Network (aka Rockman.EXE in Japan), became a rich, new cash cow for Capcom, one that they milked for all it was worth. It saw six mainline entries (with most titles split between alternate color carts ala Pokemon), four different spin-offs, and a sequel series, Mega Man Star Force. Bear in mind this was all released in the span of nine years, showing Capcom's general desire to beat a horse (with yearly releases, and then some) for all it was worth.

The series had two action-platforming spin-offs: Mega Man Network Transmission (developed by Arika and published by Capcom for the Nintendo GameCube) and the WonderSwan Color-exclusive Mega Man NT Warrior WS (developed by Tose and published by Bandai). Both games are strange inclusions in the franchise as they combine classic (often times hard-as-nails) classic game play with the characters, chips mechanics, and story of the far more kid-friendly (and easier) Battle Network games. While I wouldn't call either game a disaster, and I do think the WonderSwan game in particular has some interesting ideas, they both are noble failures to be sure. There might be a way to mix old and new elements of the franchise together, but this WonderSwan title really doesn't manage to nail it at all.

The in-game story basically recounts the broad elements of the first season of the Mega Man NT Warrior anime. I would say you could follow along with the story and get what was going on except the way it's told in the game is so garbled and disjointed that I really couldn't make heads or tails of it (even with a English fan translation of the game, plus a wiki open to explain it all). Suffice it to say that Lan and Mega Man have to come to the aid of ACDC Town because Wily and the rest of the W3 are terrorizing the citizens with plans of world domination. You know, all the basic Wily stuff we've seen over and over again. Mega Man is then tapped into the Internet to fight all the bad guys Wily has posted around, and once you beat enough of them you can take on Wily and his evil Virus to save the day. It's not original but it does the job (if you can parse what the hell is going on, that is). Or just play it in the original Japanese, ignore the story, and enjoy it for what it is.

You might think that playing a game in Japanese would be hard to do, especially with RPG elements blended in, but this game sits much closer to the original, classic NES Mega Man style than the Battle Network games. Mega Man runs, jumps, and shoots all in the usual 2D platforming style. You'll have to get from the end of one stage, to the other, all to find the boss chamber and s foe to blast to bits. Kill the enemies that stand in your way, dodge pitfalls and traps, and conquer the six stages in a play through to reach the end of the story. 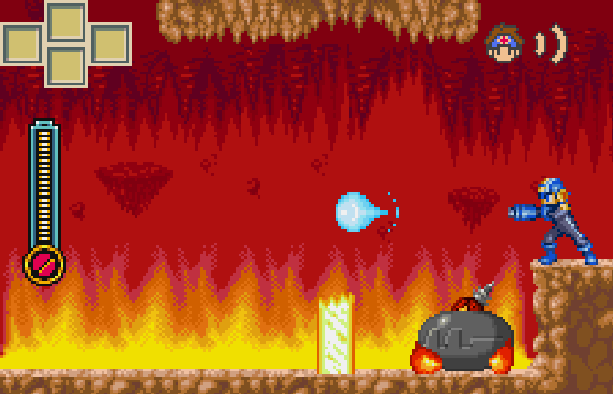 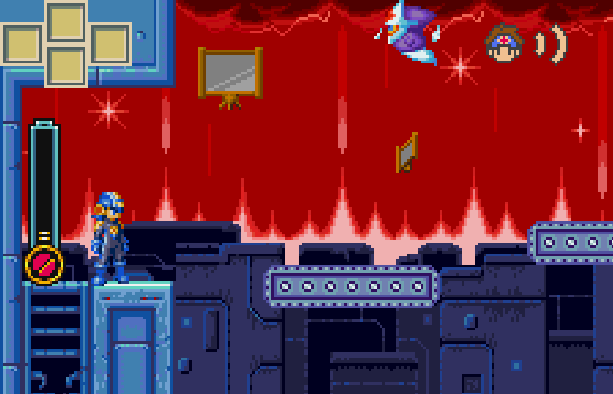 While six stages doesn't sound like much, it is worth noting that each of the first five stages in the game feature branching paths. While you only have to do one set of paths on a single play through (which, if you know what you're doing, will only take you about 20 minutes or so), you are encouraged to go back through and play the other paths to see more of the story. And, if you play through all the paths across three throughway's (to see everything in the main game) you'll unlock a bonus extra stage, with a new boss, to cap the whole experience. Thus, you could spend a good hour on the game to see everything.

The way the game is broken up is both a blessing and a curse. On the one hand, an hour is a good length of time for a classic Mega Man game, most of which took less than 45 minutes to conquer. That being said, a lot of that one hour play time will see you going through the same bits of levels over and over as you reach branching paths to explore. You'll see a lot of the same cut-scenes, be forced to collect the same power-ups over and over again, and do things you'd seen time and again, just to get to that last bit of new content. On top of that, if you compare this to the lengthy game play of the mainline Battle Network games, this title feels criminal short and repetitive.

I think I like some of the ideas that went into the branching path structure but it doesn't really work in implementation. That's also how I feel about the basic mechanics of the game. While Mega Man feels okay to control, he is a little slow and stiff (which is surprising since the WonderSwan ran at an oddball 75fps, so you'd expect it to run pretty quick). He's not as floaty as in his appearance over in the other platformer, Network Transmission, but that doesn't make him really fun to play.

On top of that it doesn't feel like he Battle Network elements were integrated all that well. The battle chips come in two varieties -- single-use and persistent -- but most of them are dropped by enemies. Unlike in Network Transmission where drops were triggered by killing enemies as quickly as you could, it feels like drops in the WonderSwan game are entirely random. You can sometimes kill an enemy instantly and get a chip, other times not, and sometimes they linger on screen for a while before you kill them and then drop a chip anyway. It makes farming for chips (of which there are only a paltry 30 in the game, most of which are functionally the same except for an element applied to them) annoying and hardly worth the time or effort. 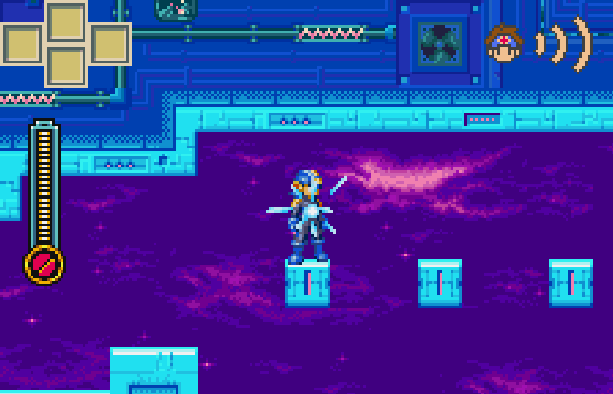 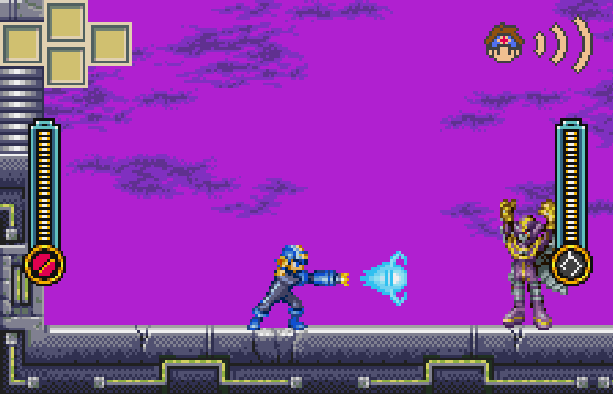 Beyond that, it doesn't feel like the chips have nearly as much power as they should. I honestly found that I was better off just using the buster in most boss fights, shooting away while I avoided the boss's basic patterns. The one chip that was actually useful, a dash ability that you just find sitting out, is one of the persistent fixed chips that doesn't wear out. You could use it as much as you liked, and while in a dash you are invincible (although not immune to falling in pits). You can even use this chip in boss fights, leading to many instances where you can just dash-spam the boss to avoid everything they do. It's really imbalanced and kind of stupid.

Along with the chips the game also has different "styles" for Mega Man to use. These basically give Mega Man slightly different stats (more or less health, defense, and the like) but also an element applied to him. These elements are like in main games where Fire is weak to Ice, Ice is weak to Electricity, and so forth. These can be useful in some places, if you know what elements each enemy is weak to, but in general switching between styles, and trying to use their abilities, feels severely under-baked. I ended up just ignoring them entirely because they aren't essential to the game play in any meaningful way.

Going through the game a couple of times, I get what the developers were thinking. It's a nice looking little game that does try to blend old and new (at least, old and new as of 20 years ago) into something different (and fresh, assuming you didn't play Network Transmission). This is a game that, with more care, might have actually been really good. Instead it was clearly put together on the quick, for a system that never really caught on, and then shoved out the door. I like the ideas behind the game, but in the end Mega Man NT Warrior WS just isn't worth playing for any length of time (let alone three play through).