Every video game you've ever played has fan-hacks for it and the Mega ManIn 1987, Capcom released Mega Man on the NES, a game featuring a blue robot that fought other robots and took their powers (so that he could then fight other robots with those powers, and on, and on). The series went on to release over 50 games in 30 years and become one of the most famous gaming franchises in the world. series is no exception. We've already covered one such game, the sublime Rockman 4 Minus Infinity, but there are hundreds, likely thousands more that fans have made over time. That's not to say all of them are any good; many are, in fact, quite terrible. We don't talk about most of them here on this site because trying to catalog and discuss every hack ever made for the Mega Man on a review site like this would be a fools errand.

Instead we'll just take a moment here to highlight three hacks that I found interesting as I traveled the Internet. Each does something just interesting enough to stand out from the pack (they aren't just "kaizo" hacks but try to do something interesting with the format), making them ideal for discussion:

This first one is for the original Mega Man. I find hacks for the original game to be interesting because, frankly, this game isn't anywhere near as beloved as later games in the series (while not the most hated game, it's still not high on most people's lists of "best of the series"). Anyone that wants to take care with this entry, with its six Robot Masters, weird points system, and mechanics that are just starting to take shape, deserves at least a little attention.

This hack mostly focuses on graphics, swapping out items, enemies, and even the first six bosses, for sprites from later in the NES series. The basic behaviors of many of these enemies don't change, but the levels are at least rearranged and re-imagined. Seeing this game with updated graphics to look like later entries actually makes you appreciate the game more; it doesn't feel so awkward, so off from everything that comes later, but blends better and feels much more "of a piece" with everything that would come after. 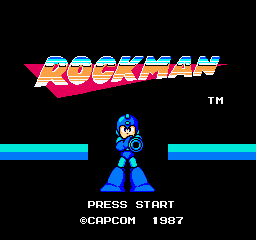 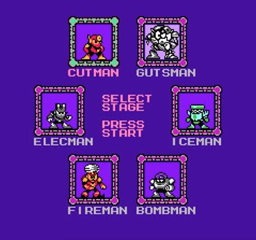 And frankly, between the bit of spit and polish and the re-imagined. levels, this hack gets a lot of life out of the original game in the series. This hack, like the other two we'll cover, isn't unfair in its challenge, it just presents no maps and re-jiggered obstacles to keep the game fresh and interesting. Plus, the robot weaknesses are mixed up, allowing you to experience the fights anew, which is a lovely touch.

Sadly, while the opening six stages have been changed up, the entirety of Wily's Castle has been left as is -- graphics, stages, and enemies. I have a feeling the hacker lost interest in this creation once they were done with the first six stages and just released the game as-is. It's a bit of a disappointing end to the game -- I was really looking forward to seeing what they could come up with for the four castle stages -- but the opening half of the game is good enough to still make this a recommended try.

This hack of Mega Man 3 takes its own interesting angle: setting itself as an interquel between Mega Man III and Mega Man 4 (and, in a nice Easter Egg, the Game Boy Mega Man III as well). In the game, Mega Man returns to the ruins of Dr. Wily's third Skull Fortress to fight the robots within and once again take out the evil Doctor before he can rebuild his army.

Although the name of the hack (and a few symbols scattered around) make reference to Return to Castle Wolfenstein, this is not a 3D shooter, just a standard Mega Man hack, but a creative one. Each of the eight robot masters are setup in Wily's fortress, and each of their stages opens at the entrance of the castle, which different barriers sending you different parts of the opening stages of that fortress (with rooms recreated in references to the rooms and halls of Wily's castle). As you explore you'll venture over similar paths but be forced in different directions, finding new avenues to explore as you take out each of the Robot Masters.

From there, for the Doc Robot stages, instead of redoing four of these opening areas, the game instead sends you a little deeper into the fortress ruins, again crossing paths over areas you've been and new areas you see. You still fight the Mega Man 2 Doc Robots (which is one change I wish they would have made, instead maybe having the Doc Robots use Mega Man 1 forms, or maybe be prototypes of later robots in the series) and defeating them still unlocks the the last areas of the fortress. 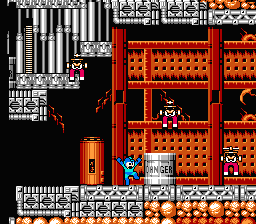 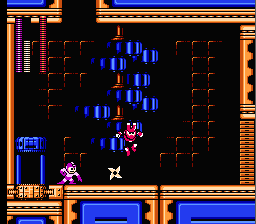 Sadly it's here, after Doc Robot is defeated, that the artifice of the hack falls apart a little. The hacker, for whatever reason, wasn't able to change the cut-scene where Dr. Light talks about Dr. Wily turning-coat and stealing Gamma (which, when you see ruins of Gamma in the early stages makes no sense, really). From there the player is shown a rebuilt Skull Fortress (really, just the standard Skull Fortress map) and you go through the usual map screen animations... before being dumped back in the ruins. It doesn't quite come together.

Still, unlike with Rockman Mochi were the hacker just didn't finish this game, the few tweaks that weren't made here don't really ruin the hack. I like how much work was put in and while I would have liked to have seen more done with the robot in the Skull Fortress (which are all left the same) and Doc Robot, I think the overall concept of this hack is a winner. It's easily 85% of a great idea, which is better than many hacks you'll find.

Finally we skip ahead to one of the weaker entries in the series, and the last of the NES era, Mega Man 6. The hack, Rockman 6: Magical Jet Tour, has one really interesting idea that does change up a lot of the game: from the outset of the title the Rush Jet and Rush Power Adapters are unlocked instantly (even if the weapon gets screens still dictate that you also get them later; just ignore this).

This is an interesting idea especially because the Rush Adapters always felt so tacked on and superfluous in the original title. Some of that is, of course, because the early stages of the game had to be designed around the player not having access to this powers so the adapters couldn't be essential to the first half of the game. But even then, only a couple of stages (and bosses) in the fortresses (both X Castle and Skull Fortress) really make using the adapters mandatory. The rest of the time you can ignore them entirely.

Here, though, these powers sit center stage. Mega Man will need to fly through many sections of the early stages, and more use it put towards them in the later stages too. This completely changes the feel of the game, for one, but also makes you appreciate how interesting these powers really were. They're a neat idea that changes up the basic Rush dynamic and creates new challenges and ways to play these games. Sadly, after the Jet Adapter appeared once more in Mega Man 7, the concept of it was essentially dropped. 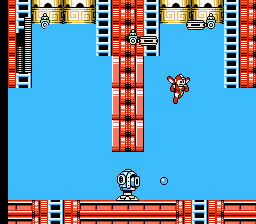 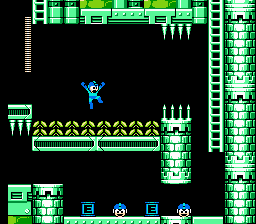 I liked the balance of the levels in this hack. While challenging, none of them felt purposefully hard (and certainly not "kaizo hard"). There are places that were a bit finicky, sure, and you probably will have more than one pixel-perfect death to blame on the creators... but then that's also something you can say about many of the stages in the "real" Mega Man games. It's certainly not something I would hold against the creator so I never felt like the challenge of the game got out of control.

On change that did annoy me, though, was that every single boss weapon was nerfed in some way. They either fly too fast, or don't fly at all, have no range or act unexpectedly in ways that are really not useful. I get that the creator wanted to put emphasis on the adapters and, as such, took all the power and usability out of the weapons so you didn't rely on them as much. But the weapons are a key part of this series and to nerf them down so far ruins the balance just enough. Whether that unforgivable is up to the individual player.

That said, overall this is an interesting hack. To see this level of care put into one of the lesser entries in the series is pleasing, to say the least. And now I suddenly have a new appreciation for the Rush Adapters, something I never thought I'd say.