When it comes to the SNES, the original two Mega Man X games -- both Mega Man X and Mega Man X2 -- sit as absolute classics of the console. These tw2o helped to move the Mega ManIn 1987, Capcom released Mega Man on the NES, a game featuring a blue robot that fought other robots and took their powers (so that he could then fight other robots with those powers, and on, and on). The series went on to release over 50 games in 30 years and become one of the most famous gaming franchises in the world. series from its NES roots into a new and awesome direction, and between the original and its sequel, it redefined expectations for a Mega Man game. It was refined and absolutely playable, especially in comparison to the "proper" sequel in the classic series, Mega Man 7. 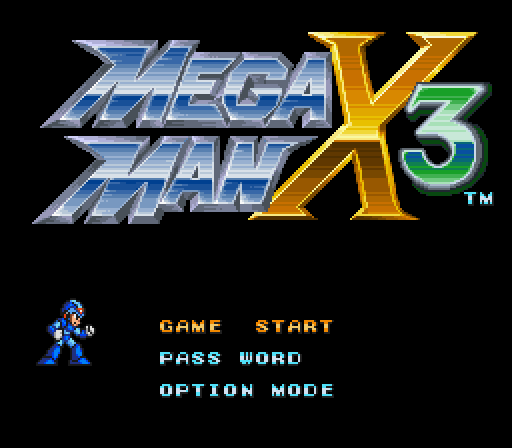 Thing is, though, that while I will credit those first two games as being worth such bold praise, the same doesn't extend to three-quel in the series, Mega Man X3. While I love the first two games this third title, for me, fell with quite the wet thud. It's not that it's a bad game, per se, but it certainly doesn't manage to find a way to rise above what came before, to take the bones of X2 and create something even more impressive (not in the way that X2 did for the original X, or how Mega Man X evolved over it's direct predecessor, Mega Man 6). While a competent game, what was missing was that spark that made the first two games so special.

I'm sure some of that is because these first three games, X through X3, were produced one after another, each a year apart. That was, of course, Capcom's way with the Mega Man series. Remember that the original series saw essentially yearly releases from Mega Man to Mega Man 8 (and then Mega Man and Bass the year after that if you want to count that title). Capcom loved to iterate on this series over and over again to try and squeak as much cash as they could out of the series and, as the original series progressed, it became harder and harder for the team to find good things to do with the series.

When looking at the classics you could see a steady progression from the original Mega Man, which set the form and formula, to Mega Man 2, which refined everything that worked about the original title to become (for many) the best of the series, and then Mega Man 3, which saw what the previous title did and said, "hold my beer!" adding in even more content to the delight of fans. If we compare Mega Man X, we could think of the first X as a refinement of the original formula while X2 was the sub-series's "hold my beer" moment. Which then leads X3 as the Mega Man 4 of the series, which isn't a great look.

I know Mega Man 4 has it's supporters but there's no denying that by that fourth entry in the series the games had started to get stale. All the surprises we expected had been played out and, while dependable in its own way, Mega Man 4 didn't have anything new to say about the formula. That's how I ended up feeling after playing through Mega Man X3: it was fine, but I felt like I'd already seen everything the game had to say before. More capsules? More bosses that you have to fight alongside the eight Mavericks? More of Sigma? I mean, sure, that's all part of the DNA of the X games, but where's the new meat? That part was lacking. 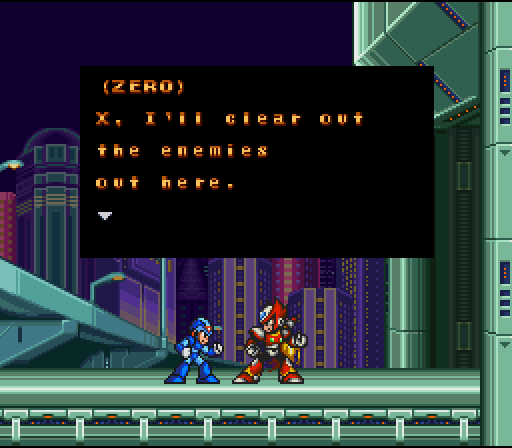 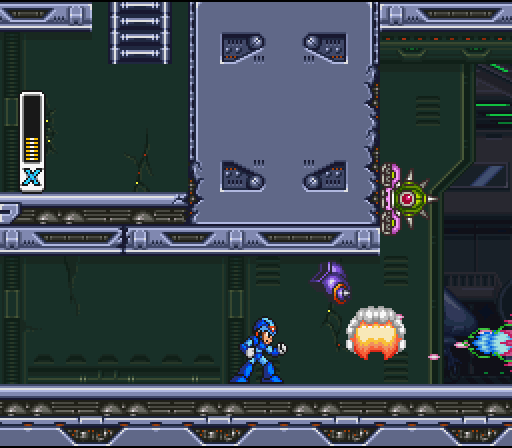 The first issue with Mega Man X3 is that it really doesn't have anything new for the series. In fact, by design, it basically resets Mega Man X back to where he was at the start of the previous title. Because of the formula of the games Mega Man has to lose all his powers between titles, so all the upgrades he got in the previous game -- the air dash, the weapon charging, the largely useless helmets -- are gone here all to be gathered again (with minimal further enhancements) as the hero once again explores eight robot stages. Sure, there are additional capsules you can find that will give you a further boost, via chips, if you so chose -- a second air dash if you grabbed the leg chip, instant weapon charging on the arm chip, etc. -- but X could only have one of those chips at a time and, if you knew the secrets of the game, having any one of those chips actually prevented X from getting a Hyper Chip with all four enhancements.

Even if you did go hunting for the enhancements, they were generally pretty blah. All were basically incremental upgrades that really didn't add anything to the flow or movement of the game. It all felt like a lot of padding meant to stretch out the experience as opposed to must have updates that really expanded what X could do or how he could be handled. And when you consider that all these upgrades essentially put X at par with Zero, who was also playable in this game, it really felt like a step back for the hero.

Now there is something we do need to discuss: Zero being playable. I'm sure you're sitting there going, "hey, that's a big new feature," and it would be if Zero were actually useful. That hero is fun to play, and he's powerful and comes with his super-strong Z-Saber off a charge. Unfortunately Zero wasn't allowed to fight bosses in this game, and he also didn't get the benefit of any of the capsules. Worse, if you played as Zero during the game and somehow managed to get him damaged enough that he could die, this would cut you off from one of the most important upgrades: the Z-Saber for X. To get this you had to defeat hidden boss Vile, try to take Zero into the Mosquitus boss fight in the Sigma Tower, and you had to keep Zero unharmed (never let them get to death status) during your play-through. It made having Zero in the game largely pointless, really.

Those are all qualms with what the game tried to "add", none of which I felt added much to the overall experience. The real issue is that all of this is a distraction from the main game, though. See, if you don't bother going out of your way to collect everything the main game itself is surprisingly linear, tedious, and short. Most of the stages in the game are pretty barren, short halls with maybe one gimmick that the stage beats over and over again. They aren't generally challenging -- the challenge is often reserved for the hidden secrets -- and the overall impression is that the stages are just there to funnel you to secrets, not to actually provide an experience in and of themselves. 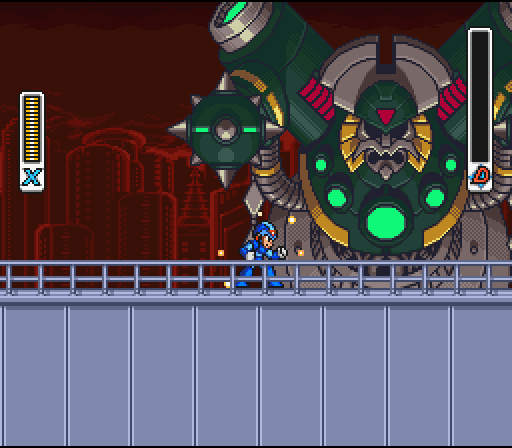 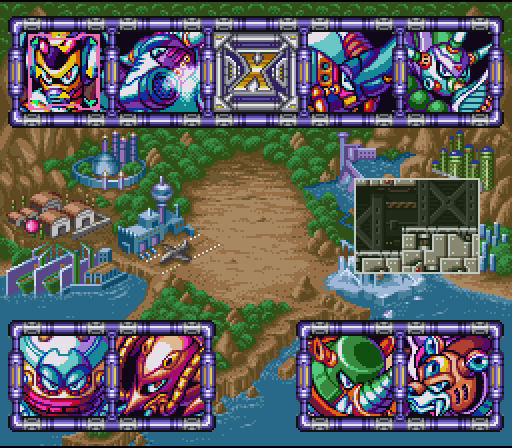 This was a problem I started to notice back in X2, especially in some stages (like Overdrive Chorister) that were so short on their own that if you didn't actually go looking for secrets it felt like the stage was over in seconds. I get that impression every time I play through X3 as I try to find the charms of the game itself and just find it lacking. Mega Man stages are supposed to be sprawling gauntlets that make you work to get through them. By shifting the dynamic to finding secrets a big part of the magic of the stages was lost.

That's to say nothing about the bosses which are, generally, some of the blandest of the lot so far. None of them really have the personality of the previous 16 Mavericks we say, to say nothing about bland hunters Bit and Byte. Naturally, too, we expect Sigma to reappear, which he does, and he's as tacked onto the game as everything else in the title. Everything here just feels so rote, like the title is going through the motions without putting in care or effort to actually make something interesting for the fans. It's a blah game, start to finish.

What works about the title is certainly the bones of the engine its based on. This game plays, for all intents and purposes, like the previous two games and it's obvious just how much the company cut corners to get one more title out of this engine before they had to rework everything for the PlayStation (that title, Mega Man 4, would take a year and half of development, after this title was ported to the PlayStation and other consoles, and the team was able to do a little more with the concept when given slightly more time to breathe. The game plays solidly enough, with controls and movement as you expect, but it's not just the game play but the experience that defines a good Mega Man game, and X3 lacked all that.

Overall it did feel like the series was starting to struggle with its own relevance. It certainly felt like the high-water mark for the series was on the SNES and, even then, there was only so much the games could do before the cracks began to show. Mega Man X3 is an imperfect game without anything new to say about the character, the world, or the game play itself. It's fine, and it does what you expect from the series, but it also doesn't do anything more than that. I had high hopes for the game when it came out and I still have expectations about what a Mega Man X game should be. Mega Man X3 fails on that count.