1994 was an interesting year for the Donkey KongCreated as the titular villainous ape for his first game, Donkey Kong, along with the whole Kong family, has gone on to have a ling and varied career in a variety of Nintendo games. brand. When we think of DK from that era we tend to think about the big ape's third generation gorilla, also known as Donkey Kong, going on a big adventure with his good buddy Diddy in Rare's magnificent Donkey Kong Country. That game was much ballyhooed, getting constant coverage (especially from Nintendo Power) touting the awesome 3D rendered graphics (which, deep down, were just renderings turned into 16-bit sprites, but we all bought into the hype). That game dominated the conversation and became an instant classic, still much beloved by gamers the world over.

That same year, though, another Donkey Kong title was in development. Think of it as a game released before the SNES title to remind gamers where the Big Ape came from. "Don't know Donkey Kong? Want to learn about him before Donkey Kong Country? Well come play this remake!" Except, really, this 1994 rendition of the classic arcade game is so much more that just a remake. An expanded sequel that uses the original Donkey Kong (and, surprisingly, bits of Donkey Kong Jr.) as it's base, this is a game that managed to update the original into something so much bigger and better than anyone could have expected. And then, weirdly, it just kind of faded away.

At first blush you might think that Donkey Kong '94 (its working title, as the game is simply titled Donkey Kong, but everyone knows it with the '94 moniker) looks like just a remake of the original Arcade title. There are some minor differences that can be seen immediately -- the girder stage is not shorter by two platforms, while other stages are similarly truncated to fit the tiny screen of the Game Boy -- but overall this is an endearingly devout remake of the original title. Things only take a turn once you defeat DK at the end of stage four: instead of the game looping back to the first level, instead DK wakes up, grabs Pauline, and runs off, leading Mario on a big, world wide quest to get Pauline back.

From here the game play really starts to show its differences. The game is (generally) broken up into three regular stages, followed by a boss stage. In the regular stages, Mario has to run, jump, and do everything he can to grab a key to a locked door and exit the stage (to chase after DK). Along the way there are items to collect (Pauline's hat, purse, and umbrella) and, if you collect all three, you get to play a bonus roulette after for some extra lives. Clearing these three unlocks the boss stage which plays like the classic DK stages: dodge pitfalls, avoid traps, and get to the platform next to Pauline so DK can grab her and run off to the next area.

Yes, you'll be doing this a lot as the game is pretty darn expansive. You have nine worlds to tackle, from the city to a ship, a jungle to DK's final tower, and each of them have at least eight stages in them to complete. That's a solid 70-plus stages and while none of them are overly long (most are one to two screens in height), they do add up to quite a lengthy adventure. Even if you know what you're doing, going through the stages and collecting everything will take you a couple of hours (and even just an "All Stages" run will take at least an hour if you're speeding). Each stage is unique, and there are a few varied challenges, all to help keep the player on their toes.

The game gets even more expansive when it comes to Mario himself. Where in the original game he could simply jump (and it was a pretty pathetic jump at that) now our Jumpman is able to perform multiple types of jumps. He can skid, turn, and do a flying jump. He can do a short hop to land on his hands and then do a bigger jump out of that hand stand. He can even jump again out of that jump to get an additional high jump. Oh, and he can use high bars and wires to spin himself to jump even higher. Coupling that with the fact he can now jump on (some) enemies and pick them up (a la Super Mario Bros. 2, and that he can also catch falling enemies and objects with his feet (while in a hand-stand) and you have one of the most maneuverable Marios around, especially considering the era.

In fact, considering when this game came out, we can observe Mario's growth from his earlier games to the titles that would come. Before this game we had Super Mario World and its style of titles (like Super Mario Land 2: 6 Golden Coins) and then two years after this Game Boy release we received Super Mario 64, which featured an even more expanded set of jumping abilities for the plumber. You can look at this Game Boy title, then, as a kind of "missing link", a game that showed what Mario could do with his jumps when given the right game. It's interesting that it came in this throwback release, but clearly the Nintendo 64 game is indebted, in at least some small part, to this adventure.

Mario's jumping abilities, combines with the classic arcade style, makes this game into something quite different from other Mario (or DK) adventures. It's small screen, and more contemplative game play, turn it into a puzzle-platformer (a genre well represented on the Game Boy, all things considered). You don't feel as rushed by the game, normally seeing your "goal" right from the start so all you have to do is figure out how to get there. Challenges do increase over time but none of it truly gets hard. It's bedeviling but never "Nintendo Hard", an appropriate difficulty level for the era. Enjoyable, but quick to complete, and consumable in small doses as needed.

Cool as that is, I can see why this game isn't as well remembered as the adventures that came out around it. The game's biggest strength, it's vastly expanded scope, also acts as a bit of a weakness in the long run. While I wouldn't call its challenges repetitive as the stages are all different, there is a growing sense of it all seeming "the same" the deeper you get into the game. By the mid-point you will have seen most of what the game has to offer and while it does change up its formula a little in the late game (world eight is all boss stages, as is the final tower), you still feel like the game goes on just a little too long, ending maybe a world or two later than it needed to. 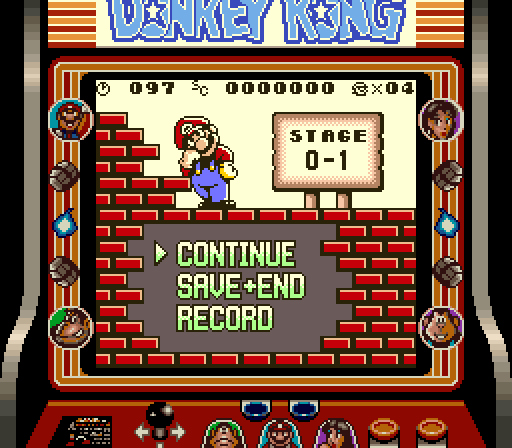 Despite this, though, the game does have its charms. It takes the classic formula of the original game and remixes it in such a way that it acts as both a nostalgia trip and a whole new adventure. it changes things up just when you get settled into an early groove, making you recalibrate, and then the end game forces you to play on your toes again, trying to keep up with every change the game throws at you. It's fun and inventive and gives you just enough to play with for a while and, yes, if you only want to play a few stages and then set it down, that's fine too.

Perhaps the game's greatest legacy isn't in its own life (seeing as it's not nearly as well remembered as other games in the Donkey Kong series) but in the games it spawned: it's puzzle platforming style went on to inspire the Mario vs. Donkey Kong series which is currently up to seven games (and counting). That's not bad for a little arcade-inspired sequel that got drowned out by the more popular SNES game that came later in its release year. I'll admit I love Donkey Kong Country but there's a part of me that holds this 1994 remake/sequel in my heart for all the fun things it did on its own.