And the Hero Becomes the Villain

As we noted in the last article, Donkey Kong was a huge hit when it came out. I was a watershed moment for arcades, introducing the platforming genre to the masses and refining that nascent idea to a point where it was ready for people to actually play it (the first couple of platformers to come out before, from other companies, were pretty awful). It also helped to launch Nintendo's ambitions in the video gaming market, giving them a legitimate hit they could use to spin up all their big ideas. The game was huge, and everyone wanted more. 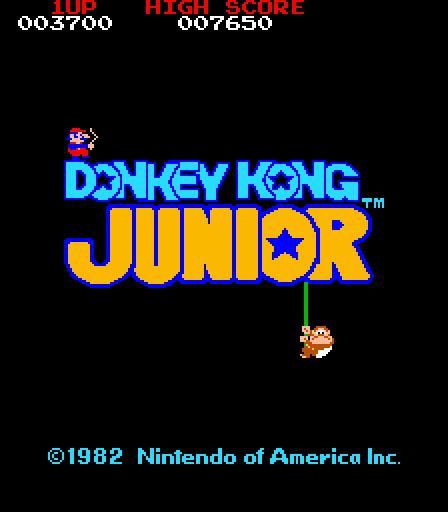 Thus, a year later, Nintendo published an official sequel, Donkey Kong Jr., and this game is, well, a little odd. I'd almost call it a sequel in name only (much like later entry Donkey Kong III) simply because it's so different from the first game. Where in the original Donkey Kong kidnapped Pauline and dragged her to the top of a tower, leaving Mario (aka Jumpman) to follow along, dodging traps and other dangers as he scales his way up, here we have Donkey Kong playing the role as the kidnapping victim, with Mario in the role of the villain, all while Donkey Kong's kid has to scale up to save his dad.

In some ways this is a sequel. For starters the basic goal is the same: take your hero across a level of traps until you reach the top of the screen and "save" the victim, only to them move on to the next screen to do it all again. After four screens, like in the original, the game loops and you start back at the beginning, with the game cranking up the difficulty, over and over, until you run out of lives. Neither game features a "proper" ending, something most arcade games lacked, so the point was to get as big a score as you could off a single quarter. All the game had to do was provide enough variety to keep people playing.

At the same time, though, Donkey Kong Jr. feels so different. Where Mario jumped and hopped along the levels, at the mercy of the terrain while he was stuck to the ground via that villainous gravity, DK Jr. has more flexibility in his maneuvering. Along with the walking and jumping from the first game, Junior can also climb vines. If you hold onto a single vine you climb it slowly but can slide down it quickly; however, holding two vines allows you to scale them much faster, but your downward momentum is reduced. Plus, holding two vines does make you an easier target for any critters that might crawl down the vines. There's more strategy in the platforming here, more to keep an eye on and be wary of. This changes the dynamic of the game substantially, making some stages much deeper in their scope than anything from the first game.

Like Mario, Junior is limited in what he can do to defend himself. Junior doesn't have the benefit of an invincibility hammer, lacking that item to pick up while he's traversing the jungle screens. Instead, his best offense are fruits scattered across stages; if he touches one of these it drops, taking out the enemies it touches. Of course, that requires him to be aligned with the enemies, once again inserting a bit of strategy to the game. You can't just pick up the fruit and hurl it at the enemies, you have to wait for them to come to you. Everything about the dynamics of this game has changed. 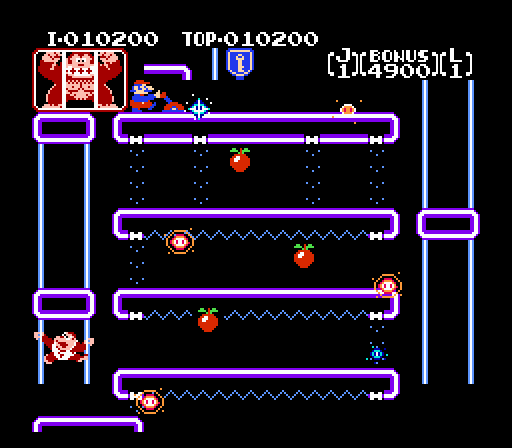 All that being said, I don't find Donkey Kong Jr. to be a particularly engaging game. I've played both of them (and their awkward sequel, Donkey Kong III) a few times, and while I find myself drawn into the original Donkey Kong, the same can't be said for Junior. It's a fun enough title, but there's some spark that's missing, some elements of the title that just doesn't hold up as well this time around as in the original.

That might partly be due to the story. While neither game has a very deep story or lore associated with it, there was something to the chase between Mario and DK, with Mario hoping to rescue his lady-love, their little heart shared at the end a sign of a happy ending (at least until the game looped). Recasting DK into Pauline's role, though, doesn't give the game the same weight. Yes, little DK Jr. is cute enough, with his own little charm, but DK is a beast that can't be trusted. Let him out of that cage and he'll go tearing off to capture Pauline again. DK Jr. may want to be reunited with his family, but should you really want that as the goal.

As far as the game play, too, there's a spark in the original game that's missing here. DK Jr.'s emphasis on vertical platforming actually makes the game feel slower. You're having to navigate back and forth on the vines, picking and plucking your way along, and it neither feels as fast nor as satisfying this time around as it did in Mario's hands. The game has some creative ideas, but it feels slower and more muddled than it did the first time around. It gets points for creativity, for trying to reinvent the original title, but it doesn't really do enough to both differentiate itself and still remain an enjoyable title in its own right. It's a solid concept, but the execution is lacking.

Still, a sequel to Donkey Kong was bound to be a success, and Donkey Kong Jr. did well enough to become a hit in its own right. Hell, plenty of reviewers out there like this game a lot (more than I did, as I found it to be enjoyable enough but not worth a lot of time spent on it), putting it on more than a few "Top Games" lists. The game was big enough, in fact, to warrant further sequels. I've already alluded to Donkey Kong III, which we'll cover in a future article, but the bones of Junior were also used to make the edutainment game Donkey Kong Jr. Math. In the game, Donkey Kong will pose math problems to his son (in two different modes of play) and Junior has to scale vines to numbers and solve the problems. 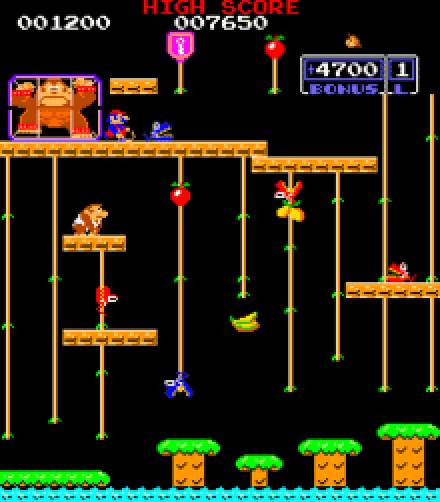 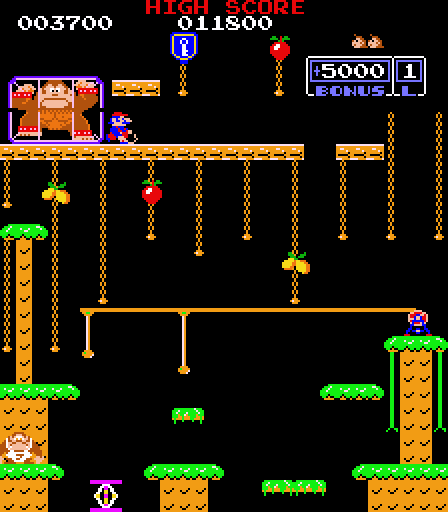 If that game sounds entertaining, you're in the minority for that opinion. Most people hated the game and it was a critical failure upon release. That's probably part of the reason why Donkey Kong Jr. Math hasn't seen much in the way of ports or re-releases in the years since -- no one would want to suffer through this tedious and rather ill-conceived game more than once, let alone repeatedly on multiple systems over the years. Instead, Nintendo largely pretends Math doesn't exist.

Instead, its the original version that saw all the ports across home media. Naturally, the game was released on the Famicom and then later the NES, with Nintendo handling the duties of recreating their game. The Famicom/NES edition is a totally faithful port, recreating all the levels and effects of Donkey Kong Jr. (unlike the NES port of the original title in the series), making this about as close to arcade perfect as you could get on a home release. This was the edition I played growing up, and I can attest it's faithful, playing as clean and smooth as if I were in the arcades.

Other home releases also followed, with editions ported out: the ColecoVision, which at least looked okay even if it didn't sound quite right, and also lacked one of the stages of the game); the Atari 2600, which was a frankly awful port that looked bad, sounded bad, and suffered a ton of screen flickering, on top of the fact that it also lacked one off the stages; the Atari 2800, which looked good but sounded awful, but did benefit from the inclusion of all four stages; along with many other home ports. Nintendo also put it out as part of its LCD Game & Watch series, although this was naturally a very limited port of the game.

Really, if you were going to play it you were better off sticking to the original arcade edition, which had better vertical spacing, or the fairly faithful (if a little squished vertically) Nintendo port. The game may not be as good as the original, if simply because of the fact that it iterates instead of evolving the platforming genre the way the original did, but it's still fun enough. And, certainly in comparison to Donkey Kong III or Donkey Kong Jr. Math it's an absolute winner. 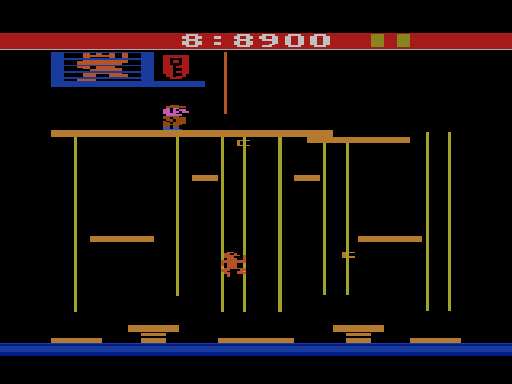 Heck, Donkey Kong Jr. did well enough that it's title character has lived on in other Nintendo media. He appeared to help his father with his Pauline kidnapping schemes in Donkey Kong '94, actively working against our heroic plumber in a variety of levels. He later also showed up in Super Mario Kart as one of the racers, although sadly he's since been replaced by the Country version of DK in all later games in the series. And he has made cameos in other sports titles and Mario-related games throughout the series. He's an indelible part of the canon at this point, and Nintendo does give him some love from time to time.

The less said about Donkey Kong III, though, the better...