Composition of a Battle

Well, here we at least have a movie where Jackie Chan isn't a police officer. It is a tendency for Chan to play some kind of law enforcement officer, although one of his earliest, Dragon Lord, cast him as the careless and lazy son of powerful noble, but most movies we've looked at show him as some kind of official, a "good guy" on the right side of the law. Even in films where it doesn't really play into the plot, like Rumble in the Bronx, Chan still played a cop (at least in the original release). 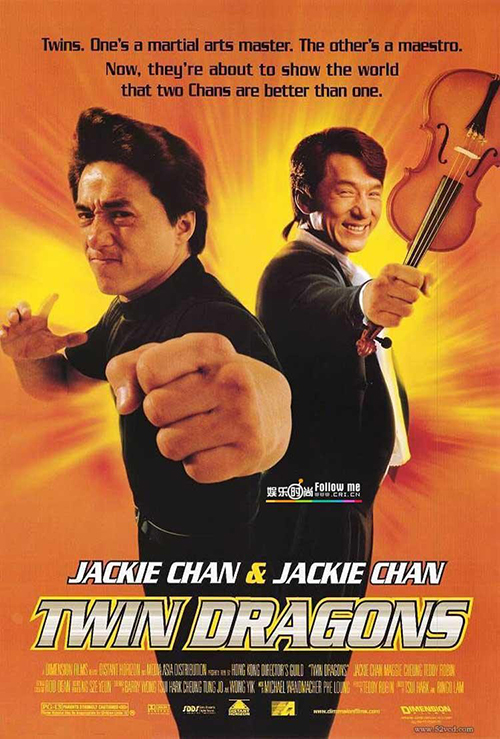 Twin Dragons marks the second film we're looking at, though, where Chan is in no way related to law enforcement. Released in 1992 in Asia, the film finds Chan playing two characters, a conductor and a criminal, separated at birth but reunited years later by comedic events. It actually makes for a different kind of story for us to watch, a plot line that feels miles apart from the Police Stories and Project As we've gone though so far. It's nice, even if the film itself isn't really much to speak of.

In the movie, a gangster, Crazy Kung (Kirk Wong), escapes capture at a hospital. He breaks into the room of proud parents who were just welcoming their newly born twins. He steals one of the twins, taking the baby hostage, and flees the building, pursued by a cop. In the ensuring fighting the baby is lost, rolling down a hill in a wheelchair only to get picked up by a drunken street walker who claims the baby as her own. The parents are forced to accept the baby as lost, never to be seen again.

Twenty-six years later the two twins have grown up into very different lives. The "lost" son, Bok Min (aka Boomer in the U.S> release, played by Chan) was raised by his adopted mother, becoming a bit of a thug. He hangs out with his loser buddy Tarzan (aka Tyson in the U.S> cut, played by Teddy Robin) and regularly gets into trouble with Crazy Kung and his gang. Meanwhile, the other son, Ma Yau (aka John Ma in the U.S. cut, also played by Chan), has grown up to be a famous composer and conductor. When Ma Yau come to Hong Kong for a performance, his life becomes entwined with the adventure of Bok Min, on the run from Crazy Kung. A bunch of mistaken identity shenanigans and mix-ups ensue, along with a whole lot of action.

It's easy to see the selling point of Twin Dragons: two Jackie ChanConsidered one of the greatest martial arts actors ever, Jackie Chan has a filmography long enough to put the collected works of many other actors to shame, and he did it all while constantly putting his body on the line, film after film. performances for the price of one. You get to see Jackie in two roles, each with plots of action going on around them to make for a very energetic movie. While that might have been the way the film was sold (certainly, seven years later, it was the big selling point for the 1999 U.S. release) it's really a disingenuous way to talk about the film. In reality only one of Chan's two characters, Bok Min, is a fighter and he's the main culprit in the midst of most of the action scenes. Ma Yau is there for comedic relief more than anything else. 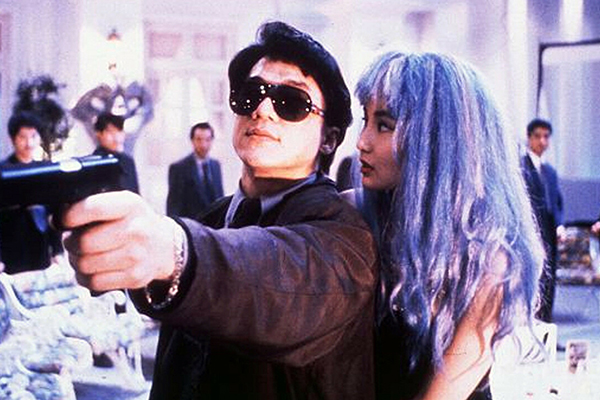 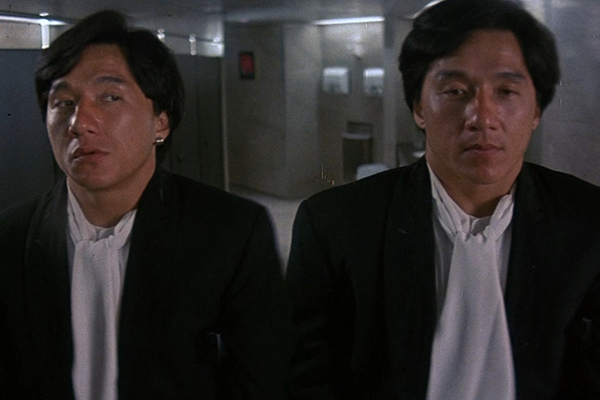 I have to be honest, the "mistaken identity" comedy of the film felt more tiresome than amusing. The film goes to the well a lot once the two characters cross into each other's path, and it never really lets up. The first couple of times one character gets mistaken for the other it is amusing, but that's humor for a couple of minutes of the movie, not over an hour of it. But the movie seems to think it's funny to constantly cross the characters back and forth, for people to somehow be unable to figure out that, hey, there's twins running around. By the third time you see the same guy in two places at once, you'd think a light bulb would go off, but no.

Meanwhile, once people seem to realize there's more than one person that looks the same, instead of assuming "twins" many characters shout "ghost!" I think this might be a cultural thing as that's not a leap of logic I think any Western viewer would assume. People looking like each other seems fairly commonplace, so ghosts or demons wouldn't be an assumption we'd automatically make. This seemed so weird to me, but multiple times in the film a character will see both Chan characters running around and instead of just confusion they actively scream and act scared. That's just so weird.

I think the movie does stretch itself thin trying to have two Jackie Chan characters at once. Ma Yau and Bok Min are thinly sketched characters, struggling with their shared screen time to give us two heroes in one film. The hook is, of course, that Chan gets to play both heroes, but the fact is that neither role gets the kind of development needs to feel like a full fledged person. They both simply act like Jackie Chan, both reflecting his inability to fully invest in the double role, but the movie also doesn't give the actor enough to do as each character to really feel different and dynamic. It weakens the movie, all because of its own premise.

Along with this, the film doesn't really treat its female characters at all well. This is a common refrain through many of Chan's films, essentially any of them that don't have Michelle Yeoh in a lead role. Here we have two girls for the two Chans, Maggie Cheung's Barbara and Nina Li Chi's Tong Sum (Tammy in the U.S. release). Due to the mistaken identity mix-ups, Bok Min's girl Barbara ends up with Ma Yau while the girl (quite literally) shoved onto Ma Yau, Tong Sum, ends up with Bok Min. In both cases, though, the girls aren't really given character development. The movie pokes fun at them, making them the butt of jokes while also grooming each of them to be love interests whether it really suits their characters or not. And then suddenly they're both going to marry their brother just out of no where. The ladies certainly feel like they deserved better. 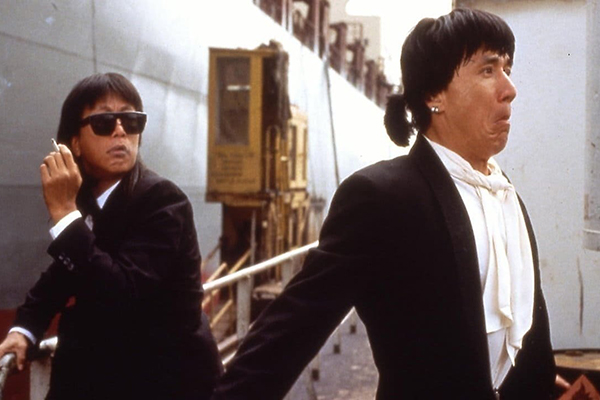 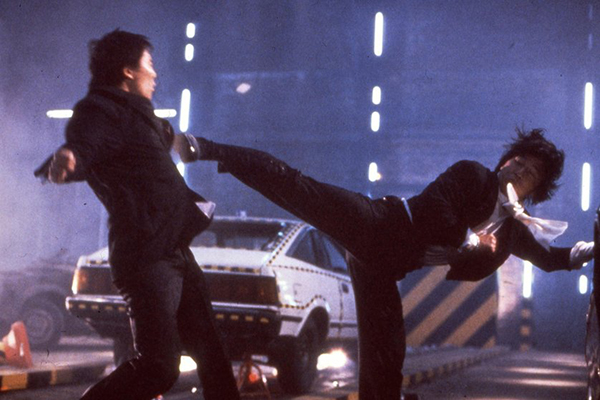 The one part where the film does come alive is in its action. A few of the sequences certainly live up to Chan's reputation. There's a decent boat chase, and then a later car chase, both of which have some decent stunts and a some solid vehicular carnage. The big action sequence at the end is the stand-out, though. The characters end up getting chased into a Mitsubishi testing plant (a weird bit of corporate crossover) and we have not only a long fist fight between a couple of test chambers, but then a big brawl in a crash test area. This part has the best action by far in the film, with a lot of great stunts and some excellent vehicle carnage. The action isn't as good here as in Rumble in the Bronx three years later, but it's decent for Chan's earlier period.

Overall, though, this film just doesn't really hold up. The comedy is lame, the characters are barely sketched, and action is only inspiring at times. There are worse Jackie Chan films (that we've already looked at) but there are also far, far better ones as well that I'd rather watch than Twin Dragons. Miramax brought this film overseas once Chan's stardom took off in the West, but honestly, I think they studio would have been better off leaving this one in the East.