A Haunting in Oklahoma

I recognize I've been pretty vocal about my dissent over the then "upcoming" Ghostbusters: Afterlife. I poo-pooed the two trailers released (see: Trailer #1, Trailer #2) and have had some pretty strong words about the toxic MRA fans that sank Answer the Call and the curious lack of that same bile thrown towards Afterlife. It does feel like the discourse around the Ghostbusters franchise has taken on a life much larger than the films themselves. 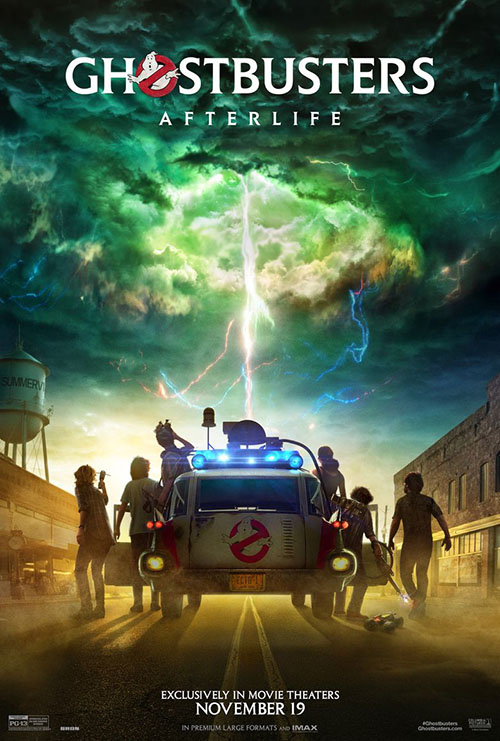 I get it: kids of the 1980s grew up with the Ghostbusters, not just with the first film and its sequel but the extremely popular cartoon that aired during that time as well, The Real Ghostbusters. Fans of the franchise probably feel as protective about their favorite media as I do about Castlevania or the Teenage Mutant Ninja TurtlesOriginally dreamed up as a parody of Marvel's Daredevil comics (going so far as to basically reproduce to opening shots of that comic's hero gaining his powers), the Teenage Mutant Ninja Turtles not only launched a sudden boom of anthropomorphic fighting animal comics but have, themselves, starred in multiple comics series, TV shows, and movies.. But it is important to recognize when something new comes along and embrace change. New ideas can make a franchise better, especially when those ideas really work. I liked the so called "Lady Ghostbusters" and I felt, from the trailers, that the new "Ghostbusters, Jr." didn't seem to really want to make changes. It was stuck in the past and that's no place for a franchise to be if it wants to grow.

I mean, just look at The MatrixA speculative future story with superhero and anime influences, The Matrix not only pushed viewers to think about the nature of their own reality but also expanded what filmmakers could do with action sequences and filming. It then launched a series of movies, games, and comics, creating a franchise still talked about today.. The most recent film in that series, The Matrix Resurrections, was basically a love letter / retread of the original The Matrix by one of its own creators. That feels a lot like Afterlife which is a nostalgia-filled love letter / retread of the original Ghostbusters films by the son of one of the creators. It doesn't want to really push the series forward, instead leaning heavily on call-backs o the original. It is a watchable film, in its own way, but a fresh and interesting take that pushes the series forward this is not.

In the movie we open at a farm in Oklahoma where, we learn, Egon Spengler (done via "fake shemps" and, later, CGI for Harold Ramis) has been at work trying (and failing) to catch a pretty massive spirit. He's managed to keep the true evil at bay, but he hasn't been able to actually catch, and secure, the evil spirit. And then he died, as the ghost attacks, Egon's body giving out. His will leaves what little there was of his estate, mostly one old farmhouse and a lot of debt, in the hands of his daughter, Callie (Carrie Coon), and her two kids, teenage Trevor (Finn Wolfhard) and awkward science geek Phoebe (Mckenna Grace). They pack up their stuff, move to Oklahoma, and settle in for the quiet life, unaware of what Grandpa Egon was up to.

The evil lurking in this quite little town in the middle of nowhere, though, wouldn't be denied. Apparently a rich old man, Ivo Shandor (J. K. Simmons), was a worshiper of the ancient evil god Gozer (yeah, that beast again), and he wanted to bring the beast back. While the kids don't know any of this, the ghost of Egon slow guides them along, helping them find his old busting gear, aiding them as they fix up the tech, and leading them to the info they need. Someone has to stop Gozer again, so why not the legacy kids of one of the original Ghostbusters, eh? 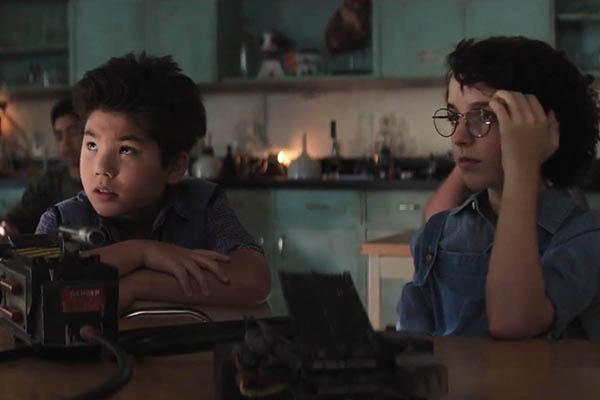 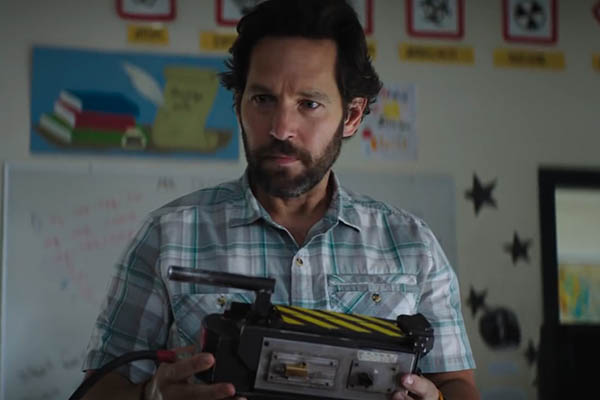 So as to avoid this sounding like I hated Ghostbusters: Afterlife, I'll admit right now that it wasn't as bad as it could have been. The start of the film is slow and the last act is pretty flabby, but there's a core that actually does work, all things considered. There's an easy and amiable middle section of about an hour that I actually legitimately enjoyed, making this one of the better Ghostbusters productions. It's not as good as the original film or the 2016 reboot, but it is a watchable and enjoyable low-watt comedy for a good portion of its runtime.

There is something fun seeing kids collect the gear of the Ghostbusters, fixing it up and getting into trouble as they tinker with their new toys. It gives them film a classic '80s kids-film vibe, something on the order of The Goonies or The Monster Squad. The film has a very specific vibe its going for and it works it well. Director Jason Reitman clearly wanted to make a love letter to the films of his youth that he loved so much, films any '80s kid would enjoy, and he did nail that in all fairness.

Also working to the film's benefit is its cast. Coon, Wolfhard, and Grace are all pretty dang solid in their roles. The standout of the man trio is Mckenna Grace who easily slides into the Egon role, delivering a delightfully dorky performance. She's up there with Ramis's Egon and Kate McKinnon's Holtzmann, and it's no wonder those characters stole the show in their films just as Grace does here. The main characters are aided by solid turns from Paul Rudd, as Phoebe's summer school teacher Gary Grooberson, and Logan Kim, as Phoebe's new friend Podcast. In fact, you can kind of see that all the best stuff that happens in the film focuses on Phoebe. She's the real center of this new film.

That also shows one of the flaws of this new movie, though: Phoebe is interested in the Ghostbusters, and in following in her grandfather's legacy, but everything that isn't directly tied to that gets barely any focus. Trevor likes a girl, Lucky Domingo (Celeste O'Connor), and starts working at the diner she works at to be near her. Lucky, though, is a barely developed character and the diner hardly shows up at all. These sequences add barely anything to the film. Trevor gets shunted off to a storyline that does nothing and, in the process, it quashes all his development. Meanwhile, mom Callie is dumped into a storyline about how much she hates her deadbeat dad (since he abandoned the family for Oklahoma decades ago), and the best the movie can do to "redeem" this and give Callie her emotional catharsis is to have her discover, late in the film, that her dad had a wall of pictures of her. To me that would be too little, too late, but the film plays it like some big revelation. Ooookay. 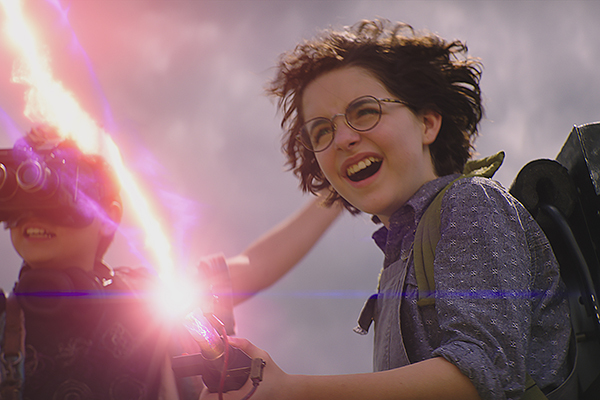 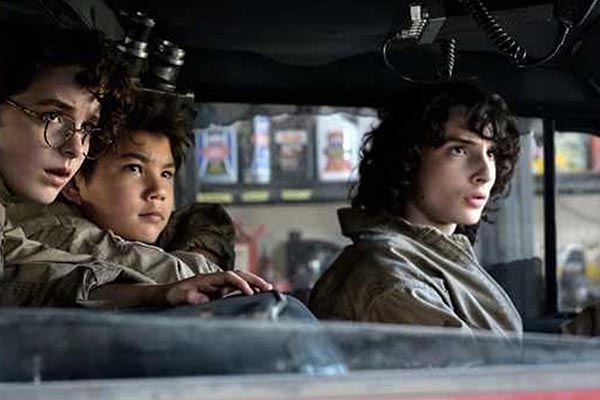 I legitimately like the film when it just focuses on Phoebe as she dorkily puts together her own Ghostbuter team. The film finds a lot of energy when Trevor gets Ecto-1 working, finding Phoebe and Podcast chasing a ghost, and the three of them venture through town, shooting at the ghost while also blowing the crap out of random property. This is a subtle reinvention of the original ghost-busting sequence at the fancy hotel in the first film, but it also leads in a new direction for the kids (they get in trouble instead of being hailed as heroes). This sequence is great and it shows all the ways the film could really come into its own.

The rest of the time, though, the film just has to look back at the original film and worship it. We get clips from the original film, played on the laptops of the kids as they learn who the Ghostbusters were (the events of the film played as legend now). This is the kind of backwards navel gazing that people complained about in the Star WarsThe modern blockbuster: it's a concept so commonplace now we don't even think about the fact that before the end of the 1970s, this kind of movie -- huge spectacles, big action, massive budgets -- wasn't really made. That all changed, though, with Star Wars, a series of films that were big on spectacle (and even bigger on profits). A hero's journey set against a sci-fi backdrop, nothing like this series had ever really been done before, and then Hollywood was never the same. Sequel Trilogy (as well as in The Matrix Resurrections). We get it, people loved Ghostbusters, but it is nice to find something new to say. We didn't need yet another film about Gozer the Gozerian, and while it is funny seeing the original Ghostbusters come back, and having Bill Murray banter with Gozer as if they were jilted lovers (Murray can always be funny), none of it feels all that necessary.

What Ghostbusters: Afterlife does right is it gives us a new cast of characters to play in the sandbox created by the original film. What it does wrong is it traps them in said sandbox and doesn't let them go anywhere new. Marshmallow men and Gozer and demon dogs and all the rest are expected and none of it plays as fresh or interesting in this film. What is interesting? Phoebe and her team of Goonie Ghostbusters having a great time just being kids with highly dangerous proton packs. There's a great core for a series of "Ghostbuster, Jr." films here and that's the part I liked best. All the rest of it... well, I could take it or leave it.

I know the fans of the franchise had hailed this as the second coming for the series, the film that "redeems" the franchise. As a fan of the 2016 reboot I think that's pretty shitty, but I won't deny that there are elements here that really work. My ideal film with these characters is one that take this setting, this core cast, and lets them do something out from the shadow of the original film(s). We don't need more Gozer, or Vigo the Destroyer (for that matter). We just need Phoebe and the Goonie Ghostbusters having a blast fighting some new threat, maybe with a little sage and sarcastic advice from Venkman. Give us that and I'll line up for a sequel. I just might not watch this film again before the sequel comes out.