We've talked a fair bit about the Ghostbusters on this site, not just in reviews of Ghostbusters and Ghostbusters II (plus an old review of Answer the Call) but also across two podcasts, so it should be pretty obvious that we have a certain level of passion for the franchise. I preface what I'm going to say next, an unpopular opinion in certain circles to be sure, with that intro because I want it known that I do enjoy the franchise and wouldn't talk about it so much if I didn't. But, the fact of the matter is that I think Ghostbusters: Answer the Call (or Ghostbusters 2016, or Lady Ghostbusters, or whatever you want to call it) is the best movie (at least so far) in the whole series. 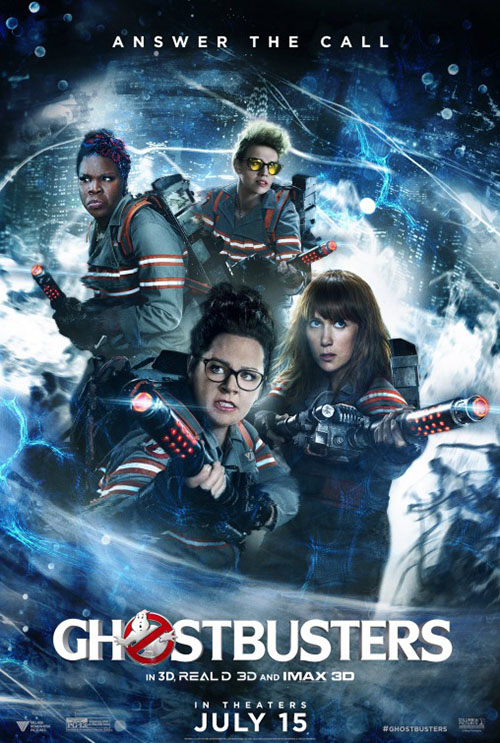 I know this is an opinion my co-host on the podcast, Josh, would vehemently disagree with -- he hates Answer the Call (although recently he tempered it down to "strong distaste") because he felt the new film strays too much from the core ideas of the series without adding enough new to the film. My opinion, though, is quite the opposite: I like the new film because, while it stays true to the concept of the series I feel like it uses the fresh characters and different setup to tell a new story in interesting ways. The film does have some minor flaws, including a last act that gets a little slow and saggy, but on the whole it's a solid entry in the franchise.

In Answer the Call (the subtitle added to the film for the home video release but also the easiest way to reference the 2016 movie), We're introduced to Erin Gilbert (Kristen Wiig), an upon-and-coming professor at Columbia University. A PhD in theoretical physics, Erin is up for tenure but her career hits a bit of a snag when a book she co-wrote years ago with Abby Yates (Melissa McCarthy), one espousing the that fact that ghosts are real, comes out. The book causes the university to take a pause on Erin and, after she has an encounter with a ghost (and is caught on camera claiming, "ghosts are real! I believe!"), the University fires her.

Forced to work together with Abby and Abby's tech-savvy tinkerer (and also doctorate in theoretical physics), Jillian Holtzmann (Kate McKinnon), the three decide to create their own think tank/business where they study ghosts and try to prove the paranormal is real. Joined soon by MTA worker (and knowledge source for all of New York), Patty Tolan (Leslie Jones), the four soon stumble on a series of devices placed all around New York, devices that seem to summon ghosts and give them corporeal form. These devices, they realize, are set to create a massive release of paranormal energy that could break the barrier between our world and the next. They're going to have to work together to figure out who is behind this plot and how to stop them.

What I liked immediately about Answer the Call was that the movie tried to establish a different back-story for all the characters. Yes, Abby and Erin and Holtzmann all still work in academia, just like the guys originally did, but while the original cast felt like a bunch of swindlers and hustlers (remember, their immediate thought after being fired for being terrible teachers was to take their paranormal knowledge and immediately go into business busting ghosts), these gals are honestly in it for the science of it all. Hell, I don't think they ever mention actually charging for their research or services once (not until the city offers to fund them at the end of the movie). 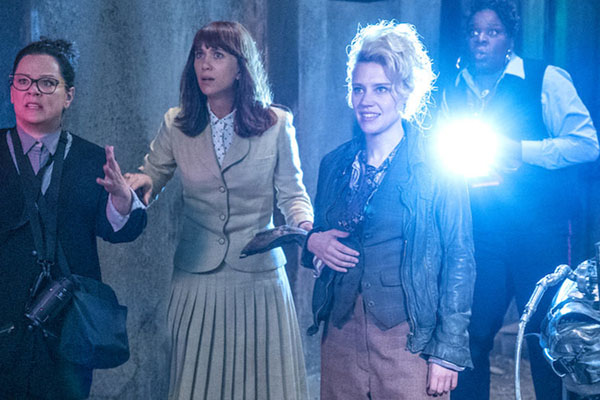 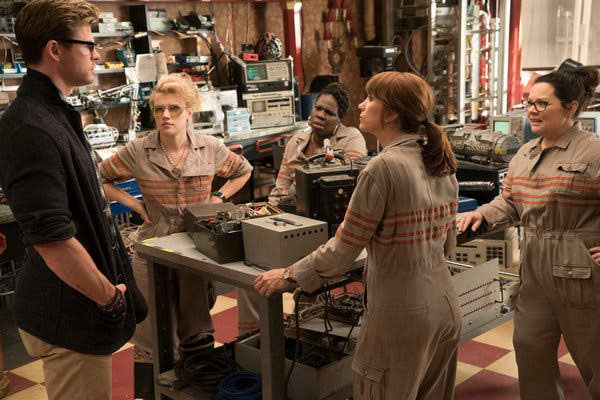 Of course it helps that all the characters are genuinely likable. While Abby and Erin have their rough spots (and, at times, go after each other angrily, like best friends sometimes do), their hearts are in the right place and they genuinely care about their work. Holtzmann, of course, is the best of the lot, powered by a winning performance by McKinnon. Honestly it felt like 90% of her performance (if not more) was ad-libbed, giving Holtzmann a loose, free-flowing feel that keeps the energy of the film going. You never know what she's going to say, but it's always pretty funny. Wiig and McCarthy are, of course, funny, too, giving their own solid deadpan reactions to a lot of the material, but its McKinnon that steals the show.

That said, I do want to also highlight the performance of Jones who had a thankless character -- the one without the scientific knowledge, the Winston -- and turning her into a fun character. The Wintson is a thankless job -- just look at how little Ernie Hudson had to so in the role in the first two films -- but Jones shines in her part making Patty feel like an actual, essential part of the team. Quite a feat, really, when her character couldn't contribute on the scientific side of things.

If there's a weak link in the film it's Kevin. As played by Chris Hemsworth -- who, it should be noted, does commit to the role -- Kevin is pretty darn worthless. He's the Jeanine in this movie, the receptionist that the ladies hire to handle the desk while they go about important scientific whatevers. Problem is that Kevin is a complete and utter idiot and while the joke of that is amusing for a little while, there's little to the character outside his dumbness. Every joke about Kevin is the same joke and, no matter how winning Hemsworth may be, the character wears out very quickly.

And it may be that Kevin is one of the few strands that can be pulled on to let the MRA doofuses make their argument against the film. "Oh, he's just a piece of eye candy and not a real character. The women say they want to be treated like equals but when they're given their own movie they treat the men just the same." Of course, that's kind of the point of Kevin, to show that this kind of character can sting when they're played from the other gender, to stick a bit of a poke in the eye of all the guys that don't think twice about the ditsy, pretty woman and how much of a trope she's become. I get it, and I get the reason for Kevin, but while I don't think he strengthens the argument for the MRA guys to hold a grudge against the movie (not that they need one -- they'll just be assholes simply because) it doesn't make Kevin any better of a character, either. 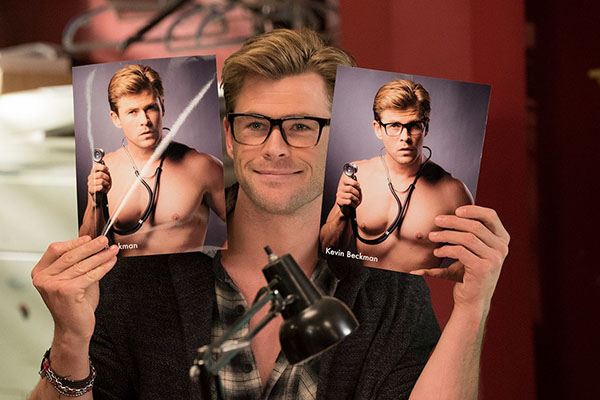 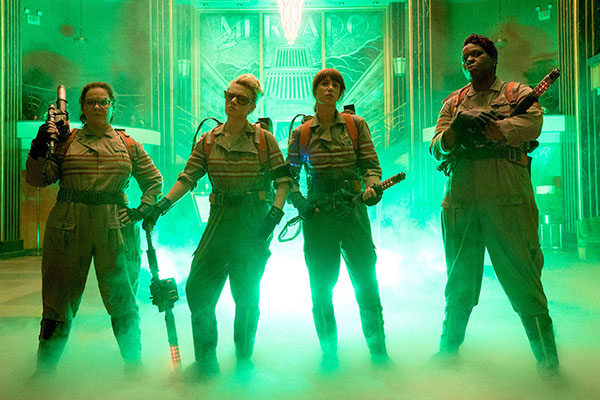 Much of the talk surrounding Answer the Call was why it ended up being a failure at the Box Office. Going back and watching the film I don't think it's the fault of the movie itself -- seriously, it's such a funny movie -- but an issue with the audience not showing up. Some of that might have been because the Ghostbusters name just doesn't have the pull it once did. Bear in mind that this film came out a solid 27 years after the second film. In the interim other attempts at reviving the franchise, like the short-lived animated series Extreme Ghostbusters, failed as well. The most popular product to arrive was the Ghostbusters video game and even that didn't exactly set the world on fire. Maybe modern audiences just didn't care much about the Busters of Ghosts.

And, yes, the MRA guys probably didn't help. If there was a large enough contingent of the the original fans that felt, somehow, that having ladies in the lead roles (instead of dudes) was an affront to their sensibilities, that it would somehow ruin their childhoods, then their failure to show up for After the Call could have hurt its numbers just enough to sink the movie at the Box Office. The MRA guys are, of course, idiots, but if there are enough idiots they can have an effect. It's just hard to know for sure.

Sadly, the fact that Answer the Call didn't make as much as it could have meant that we won't ever seen any proper sequels with the ladies (although there have been a few comic books that helped to extend their brand). After this we're going back to the original timeline for the next film, Afterlife, but for one moment we got a chance to see a new version of the continuity and, frankly, I really enjoyed it.