Some days I have to really wonder just what I'm missing about giant monster movies. I can appreciate the artistry of the original King Kong, but that film (and sequels and remakes that have done well with that source material) understood what made that movie special: it wasn't just the giant monster, or the characters around it, it was that all the characters, monster included, were treated like real people and the movie earned real pathos out of all that was happening. If only more monster movies could take that angle. 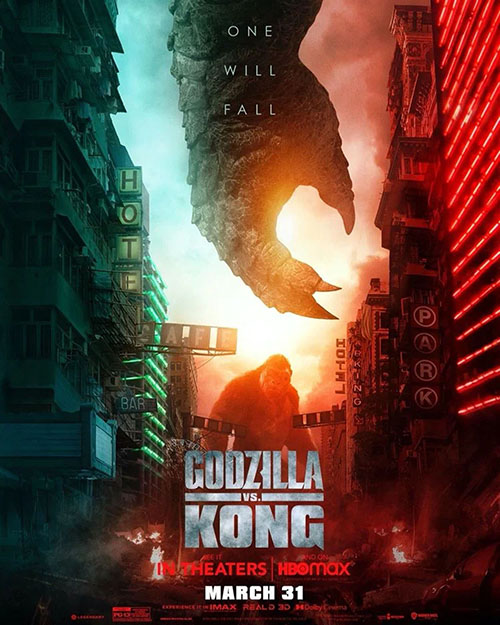 I think that's a big part of why I don't care much about the Godzilla films and their ilk. They provides all the monster smashing delight people crave, but the characters are often lacking in these movies. It's not just the monster that gets the short end of the stick, although I'd argue that most films treat Godzilla more as a force than an actual character, but all the human characters are generally crappy and shallow as well. These are vehicles to service out cheap thrills and explosions, but you have to have the right director behind the camera to pull that off, and most directors aren't Michal Bay (king of glossy explosions).

Adam Wingard, who's directed, well, a lot of small stuff culminating in 2016's Blair Witch and 2017's Death Note, does not have the flair or sensibility for explosions and carnage that Michael Bay does, especially not early Bay films. Watching Godzilla vs. Kong, an at times incomprehensible action smash-up film about monsters bouncing off each other, I longed for anything even half as good as Michael Bay. I wasn't even wishing for Bay at the height of The Rock; I would have settled for anything near as good as Transformers 4. Godzilla vs. Kong is loud and messy and certainly filled with carnage, but what it lacks is that sense of fun. It has all the hallmarks of monster films without anything that actually makes it watchable.

The film is focused on three things. First we have Godzilla who, for some reason, has gone from protector of the world (I'm guessing in both Godzilla from 2014, which I only vaguely remember, and Godzilla: King of the Monsters, which I didn't bother watching) to a destructive force attacking the Asian seaboard. No one is sure why he's gone mental, they just know that the Earth needs a new protector. That's where our second plot line comes in: Kong, once protector of Skull Island, has been captured so he can be used as the guardian against Kong. They just need to get Kong to the center of the Hollow Earth for... reasons, all so he can defeat the monsters down there and then, maybe give Godzilla reason to not be evil (honestly, these two plot lines converge together terribly).

But then we have the third aspect of the film: Apex Cybernetics, a greedy corporation led by Walter Simons (Demian Bichir) looking to get their own death grip on protecting the world so they can charge an arm and a leg for it. To that end they've devised a mechanical guardian (and, yes, it's no surprise to say this will be a new version of Mecha-Godzilla) that could be the world's savior... or it's destruction. If Godzilla and Kong can stop fighting each other long enough they just might have to take on Mecha for the fate of the whole world. 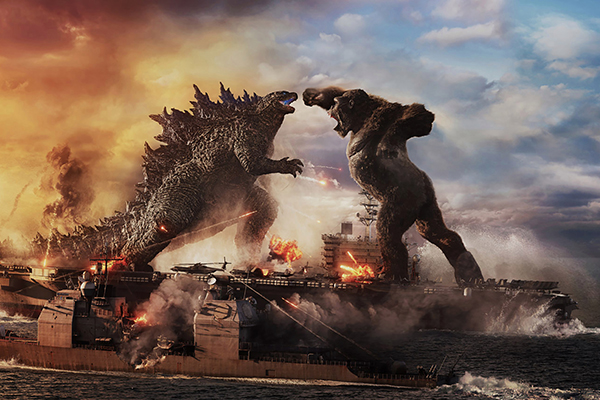 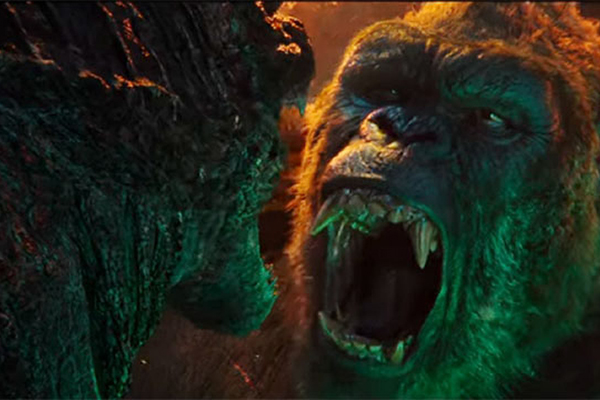 Acknowledging that I'm not the biggest monster movie fan (at least, not these kinds of monsters), I do struggle to think just how to judge this film. I found it to be a tired, bloated, incomprehensible mess with plot lines that barely make sense, or tie together, serving only as an excuse to get giant monsters to fight each other. And the thing is, if they want to make a film that smashes giant monsters together they could do that without spending nearly two hours trying to pull it off. Kong was already on Skull Island, so the writers could have had Godzilla get pissed at his existence (which seems to be a sticking point for the giant monsters) and go there on his own to fight the big ape -- that's literally something that happens on the ocean as the ape is being transported because 'Zilla can just sense his existence, so there's no reason this couldn't have just happened naturally at Skull Island.

Need to have buildings get smashed as Kong and 'Zilla fight? Just have a military base get built on the outskirts, and then some other industrialists built a small resort nearby. Just enough to get some buildings in their path (as crumbling buildings is part of the giant monster smashing motif). Want Mecha-Godzilla in there? Well, you could have the evil corporation airlift their machine over the Skull Island in an attempt to prove their version of the beast is better at handling the monsters of the island. That makes way more sense than the endless one-and-a-half of plotting with characters running all over the place accomplishing very little all so the monsters can smash against each other a whopping two times. That's it. Twice. All of this interminable plotting for two action set pieces. It's a chore, honestly.

But this this film has the same issue that so many other Godzilla films stumble into: the characters just aren't that interesting. This film manages two give us two characters we actually care about: Kong, and a little deaf girl, Jia (Kaylee Hottle), who develops a bond with Kong and teaches him ASL. These two have actual plotting, character development, and all the things I want from a proper film. So, of course, the little girl basically drops out of the film halfway in because her part of the story is effectively done.

Outside of these characters we have a plethora of people that just don't matter at all. Alexander Skarsgard and Rebecca Hall are scientists from Monarch who oversee Kong's part of the story. They're there simply to facilitate his journey from Skull Island to the entrance to the Hollow Earth and then they're basically pointless to the story. Millie Bobby Brown returns to this film as Madison Russel and she, with her friends, discovers the lab building Mecha-Godzilla, a plot point that would have revealed itself whenever Mecha was unleashed on the world so their whole plot line is also pointless. And then there's the Apex Cybernetics team, William and his daughter Maia (Eiza Gonzalez), who want to get to Hollow Earth so they can steal the tech that's there, but it's tech that they really didn't need as they already effectively had Mecha built and ready to go. Seriously, none of these characters matter at all. Not one bit. 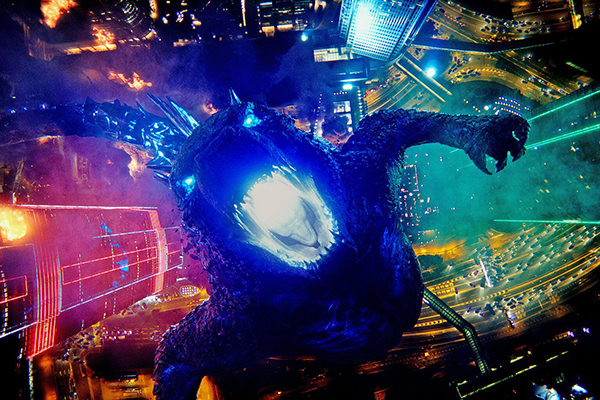 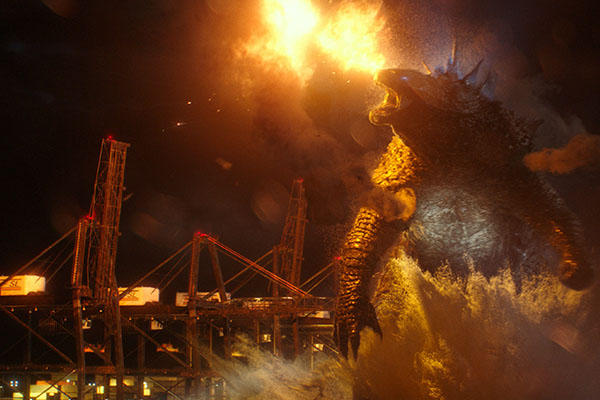 And let's just take a moment to point out that the only people of color in the film are either the two evil Hispanic people running the evil Mecha-Godzilla project, or one black guy, played by Brian Tyree Henry, who is just a crazy nut-job and janitor. All the heroes of the film are white which really sets a bad tone for the film. Well, okay, there's Jia, who is a native of Skull Island, but they had to make her deaf for her to be compassionate. This is a bad look for the film in general.

Even if you can let go of all that, what you're left with is a lot of padding until you get to a couple of CGI action sequences. Of the two, the high point of the film is certainly the fight between Kong and Godzilla that marks the middle of the movie. This is an all out brawl across a couple of massive ships and under the ocean, and it has real tension and style. If the movie could have been more of these kinds set-pieces, and just more of them in general, it might have worked even with the crappy characters and shallow plotting. Sadly this is the one good set-piece, and the other one that marks the entire last twenty minutes, is just a long, tiresome slog of monsters fighting each other endlessly.

The issue this film has for its climax is that it feels that "more is more". They already had two monsters fight so now they have to have three, and the first fight was five minutes so this one has to be much, much longer. The big problem is that this doesn't work; when we're talking about CGI monsters that can endlessly fight until the director decides a scene is done, watching these things battle goes from thrilling to expected to tedious in a matter of seconds. By minute five of this endless battle it's hard not to check out and wait for the inevitable moment where one of the monsters figures out how to deal a finishing blow and win the day. Everything up to then is just constant noise and pointless smashing serving no other purpose.

If you liked this film for all the monster smashing action then clearly this was pitched for you. This isn't my kind of movie as I need something more substantial than a bunch of neon-lit CGI cities getting smashed apart without any consequence. It's just all a bunch of polygons fighting without any real form or weight and when it's over, for me, it's just as easily forgotten. Godzilla vs. Kong is over and hour-and-a-half of padding for two big fight sequences, only one of which is actually worth watching. Maybe this is enough for some but I found it an absolutely chore to get through this. The producers need to find a new angle for their monster action because, at this point, this series has pretty solidly run its course on just how much you can do with CGI monsters breaking things.