War Is Hell, and So is This Island

King Kong has come a long way since the 1933 original film. That film treated him like a monster, through and through, although it's direct sequel, Son of Kong at least softened its stance on his kid, letting that boy be a protector to the idiot humans going to Skull Island. Since then the films have vacillated between treating him like a hero (such as in Toho's King Kong Escapes) to just a misunderstood giant (both in the 1976 remake and the later 2005 edition). He's never been a true monster again, but it's hard to say he's really been a big hero, either. More of a giant ape stuck in situations where he has to be heroic to fight an even nastier force. 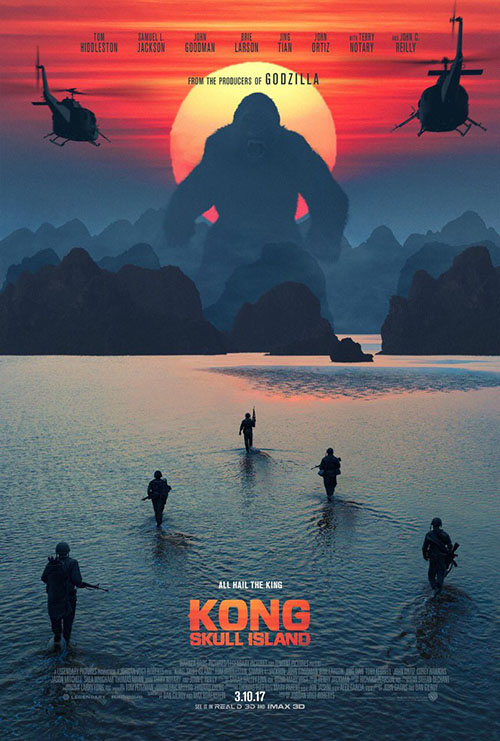 2017's Kong: Skull Island is the first film I've seen in this whole franchise that really treats the giant ape as a hero. He's not here just to try and survive, despite the monsters coming for him (and whatever woman he's jonesing on at the time), but is the actual last line of defense against a race of skull-headed dinos that live deep beneath the Earth. It's all setup to make Kong a rival for Godzilla (who went through his own transition from evil monster to protector of Tokyo decades ago). Toho and Warner Bros. wanted to smash their two giant monsters together (and then use both of them as heroes against a bigger threat), but to do that they first have to revitalize the ape. Skull Island does a good job in that regard, even if the rest of the film doesn't quite hang together as well as it should.

While the first of the Warner/Toho Godzilla films took place in a modern setting, Skull Island is set back in the 1970s, near the end of the Conflict in Vietnam (not a war, no matter what Nixon might have said at the time). As the war winds down, two scientists working for Monarch -- Bill Randa (John Goodman) and Houston Brooks (Corey Hawkins) -- convince an U.S. Senator to let them take an expedition to a newly discovered island (Skull Island, of course) and so geological surveying of this newfound land. They'll fly over (with a military escort), drop bombs on the surface, and use the sonic disruptions to find out what might be underneath (whether it's ores or gas or oil or... who knows). They pull together a ragtag team of soldiers, lead by Lt. Colonel Preston Packard (Samuel L. Jackson), along with British explorer Jame Conrad (Tom Hiddleston) and photographer Mason Weaver (Brie Larson) and set off for the island to see what they can see.

At the start things go well, with the many mysteries of the island opening to them. Soon after they start dropping the depth charges on the island, though, they get attacked. Uprooted trees fly out of the sky towards their choppers and soon they see a giant ape, Kong, is the one behind it. He downs all the helicopters and then leaves, dumping the soldiers in the middle of the island. His reason for attacking, as we learn later: the bombs have woken up a worse threat under the island and now those beasts are coming out, with the only defense strong enough to take them on being Kong himself. The soldiers will have to decide if taking out Kong is worth the risk of unleashing something even worse upon humanity.

It's interesting that, while watching Skull Island I had, more or less, the same thought as I did with the 2005 King Kong: it's about two-thirds of a good movie. The pacing issues aren't the same, and in fact I think this is a tighter and more focused movie than Peter Jackson's attempt, but in the end I don't feel much more strongly about this movie than I did the previous version. The movie loses its pace somewhere near the end and, around that point, I just kind of checked out. It all became so much noise that I stopped caring, really. 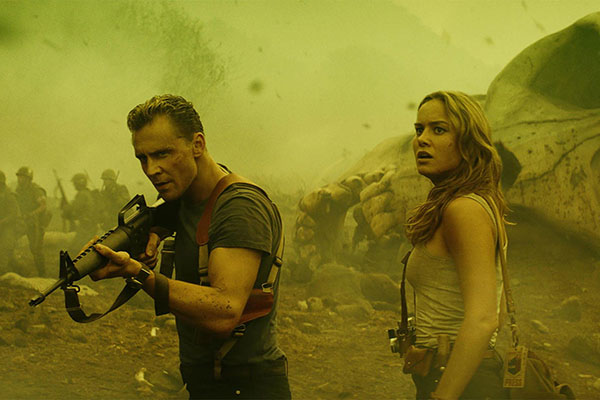 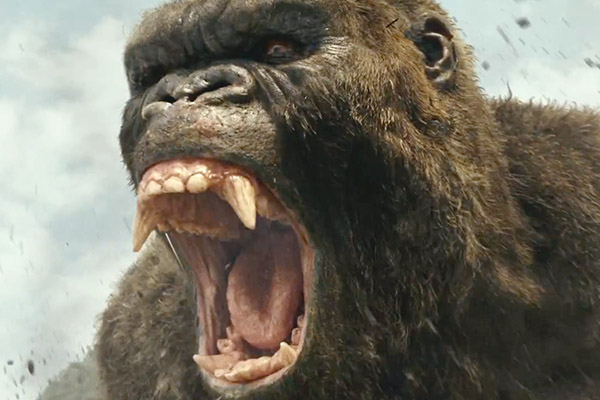 The issue with the film isn't in the setup. The retro vibe from the film, and the way it gets to people to the island (and then dealing with Kong and the other monsters on there) is practical and efficient. I even liked it, in a way, and it made me think of how the 1976 remake was about 40 years removed from the original edition and, in its own way, Skull Island was similarly removed from the 1976 edition. I doubt that was something the producers were going for, but it did work for me in that "purposefully retro to evoke a previous Kong era vibe." I liked that.

Similarly, I also felt that having a government/military expedition made a lot more sense than either a film crew or an oil tycoon. While, sure, film crews would show up eventually to document a newly discovered island, it'd be the governments that fought over it first. That setup is practical, and effective, whole also being something new so the film didn't feel like just another version of King Kong, so well done in that regard.

That said, the film loses its way after the first act or so. At a certain point the survivors of the expedition find a lost village of tribes men, meet a soldier that's been on the island since World War II, played by John C. Riley, and all the energy gets sucked out at this point. Instead of it being military vs. monsters, the film gets lost in mythologizing and trying to justify Kong as a hero. I don't mind Kong being a hero, but there are ways to handle this without a long info-dump and exposition character. The movie has such momentum through the first act, carrying into the second, and it squanders it.

I think the goal was to get everyone pumped for the sequences of Kong fighting the skull-dinos, but there's an issue there as well: it's all just so much CGI-fuckery. I've noted this before, in a number of film reviews, but when the special effects are obvious CGI the tension gets drained out of a film, and everything in Kong is obvious fake. I have no doubt they filmed on location (at least for some shots), and the human actors do all they can when things go boom and the shots start flying, but the last act-plus of the film boils down to CGI-ape fights CGI-monsters, and it's as tedious and ho-hum as the Droids vs Gungans war in Star Wars: Episode I. All the green screen and CGI in the world can't sell fake effects when there isn't something to ground them. 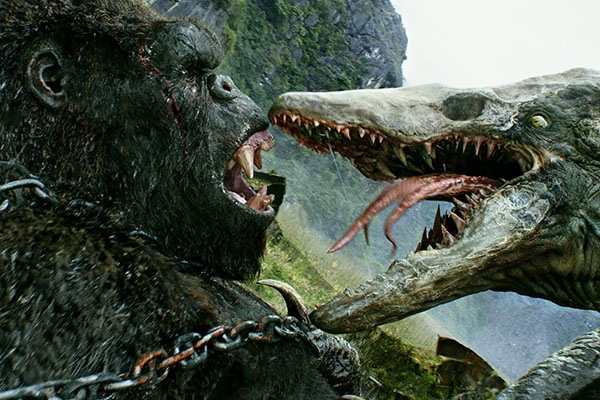 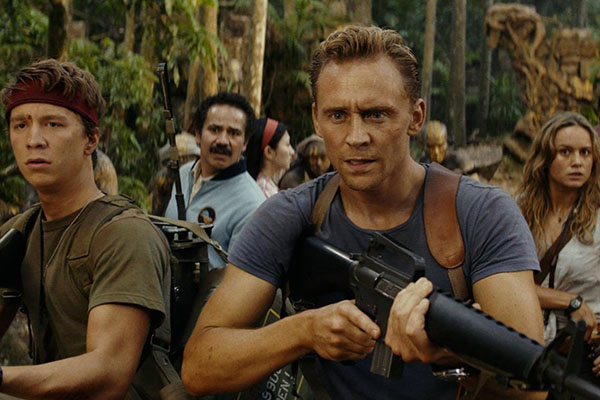 Plus, the last act is also mired in a revenge storyline between Sammy J's Colonel and Kong. He blames Kong for the deaths of all of his men (which is fair, as Kong did kill a lot of dudes in his initial attack), but when all the evidence is laid out that Kong is a hero protecting the world, the Colonel's who line of attack should have ended. Instead, he drags the movie along with him so he can attack the big ape and, obviously, die for his efforts. It's so obviously telegraphed I'm not even sure why this whole plot line was in the film as it amounts to basically nothing in the long run. It's just padding to get Kong: Skull Island up to a "proper" runtime.

I've had issues with all of the MonsterVerse films, this one included (and we'll get to all of them next in the lead up to reviewing Godzilla vs. Kong), but the biggest issue I have is it's all so fake with very little substance to them. This film has the best characters of any of the movies I've watched in this universe, and I frankly rather liked Hiddleston and Larson and what they did with their characters, but it's not enough to save this film. Kong: Skull Island isn't bad, but it's not good either. It mediocre without being thrilling, and it dies off right when it should reach a climax. It's just a waste of setup and potential.