The Call of the Wild

When we discuss classic movie monsters, much of our discussion focuses on the Universal MonstersThis franchise, started off with Dracula and Frankenstein in 1931, was a powerhouse of horror cinema for close to two decades, with many of the creatures continuing on in one-off movies years later., and they should: Universal hit on a gold mine there and worked it for all it was worth. The success of Universal did inspire many other companies to come along and try to create their own monsters to tease and titillate audiences. Most of those films were garbage, naturally, works created to get on a gravy boat as fast as possible. Those films were generally relegated to the dustbin of history, little remembered except as fodder for Mystery Science Theater 3000First aired on the independent TV network KTMA, Mystery Science Theater 3000 grew in popularity when it moved to Comedy Central. Spoofing bad movies, the gang on the show watch the flicks and make jokes about them, entertaining its audience with the same kind of shtick many movies watchers provided on their own (just usually not as funny as the MST3K guys could provide). It became an indelible part of the entertainment landscape from there, and lives on today on Netflix.. 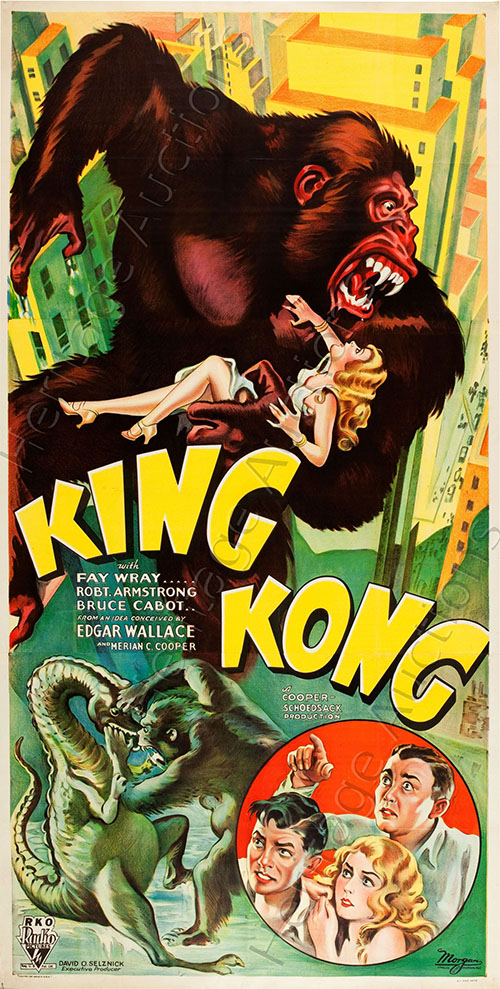 One movie monster did emerge from the crowded field soon after Universal was gaining acclaim from their earliest Dracula and Frankenstein films. Produced by RKO studios, that monster was Kong and what he lacked in Gothic charm he more than made up in size and effect. King Kong was a giant ape who stole the imaginations of audiences in 1933 and was go on to have one of the longest running franchises in history, with films still coming out even today.

Technically, even though Universal now owns the rights to Kong, the big ape isn't a Universal Monster. They only made one film with the giant ape, the 2005 remake helmed by Peter Jackson, and that film wasn't exactly beloved by Kong fans or general audiences alike. It's hard, though, to compare to the original 1933 film. While the technology for that film isn't as good, and it looks positively grainy even now (despite a loving Blue-Ray transfer), it still holds up amazingly well. It's a film that feels almost timeless, with special effects that look goofy at first but quickly suck you in with how consistent and well made they are. Back in 1933 this film had to feel like a marvel and, even today, you still get a bit of that awe when you see the giant ape emerge from the jungle.

Kong opens in New York City with film producer Carl Denham (Robert Armstrong) looking to produce his new movie, and overseas adventure the story of which he's kept hush hush even to the crew he's hired. The only issue he has is that he needs a leading lady for the piece -- his previous films, while well received, have lacked a leading lady and a romantic plot, so he wants to change that with this tale of adventure. Unable to hire any ladies for the part through the studio system, Denham goes out on the street and looks for a lady willing to take an overseas voyage to film a movie. That's when he stumbled upon Ann Darrow (Fay Wray), a down-on-her-luck actress and model looking for a big break. After being assured this will be a legit film, Darrow signs on and the production gets ready to go.

Denham's big secret is that he'd gotten a big tip from sea captain, a mysterious island that promises to host a big monster: Kong. When the crew gets to the island, the do some test shots of their leading lady looking scared, seeing how she'll react when the secret monster shows up. Soon enough the islanders, who worship Kong as a god, catch wind of the film production and, once they see Darrow and her fine blond hair, they realize she's the perfect woman to be Kong's "queen." They wait until night and kidnap Darrow, putting her out to be grabbed by Kong, and this leads the boat expedition to head into the jungle to get back their leading lady. But then Denham has the idea to capture Kong and bring him back to New York because while the film could be a success Kong is an even bigger attraction. But then, you probably know how well that's going to go... 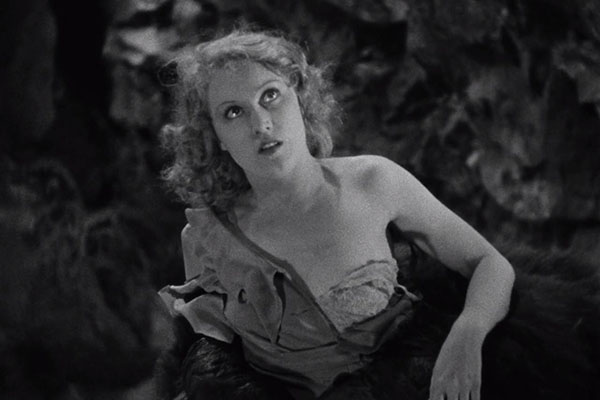 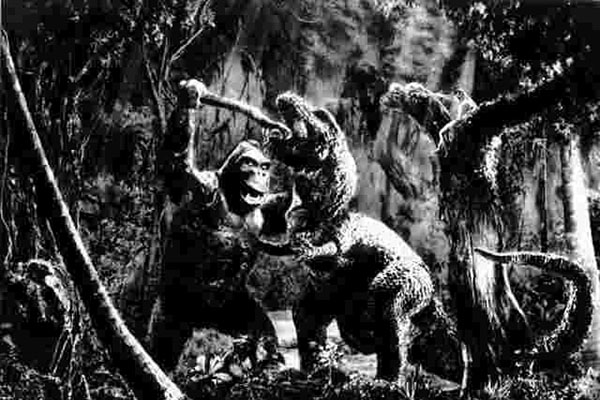 King Kong is old enough that just about every knows the story of film even if they've never seen the movie. Girl meets ape in the jungle, Ape falls for girl (even if she's just not that into him). Ape is dragged back to the city, breaks free, grabs the girl, climbs to the tallest building, and then gets shot down, falling to his death. "Tis beauty who killed the beast," as the film wraps up. This is a story that's in our collective pop-culture consciousness, with Kong being an iconic monster (yes, right up there with Dracula and Frankenstein).

Like those iconic monsters, this first film from the giant ape actually holds up really well. Yes, there are some culture-clash moments watching this film now, with a modern perspective. There's no denying, though, that for the time it was made this film was a special effects marvel. Even now I was sitting there, analyzing how they made the shots, how they set up the monsters to somehow interact with the cast members, and vice versa, despite the fact that the monsters were all stop motion figures and maquettes while the humans were, by and large, very real. It's impressive.

The film makes a lot of hay out of reverse projection screens. Early shots are about what you expect, with the humans up front reacting to what's going on with the monsters on a screen behind this. This is a technique you've probably seen in a lot of monster movies from this era and a few later decades (The Land that Time Forgot being a prime example. But then you have shots where the stop-motion models were filmed against a screen so that the figures can interact over the humans (which likely required them to run the film one frame at a time as they animated in front). And then you have shots where there's a screen of a character running behind a puppet, and then that's show on a screen in front of the actors and you realized just how deep this technique could be pushed. I loved watching all of it.

It helps that the acting is really good. The first scene of the film, with a couple of extras doing an exposition dumb, wasn't great, but once Denham comes into the scene, finds his leading lady, and really kicks the plot into motion, the film just takes off. It's kind of a three-act production, with the opening setup and boat journey, followed by the long sequence of action events on Skull Island, followed by the climactic ape escape )and tragic fall) in New York. The film never really stops, or even slows down, once it gets going, and that momentum helps to carry so much. It's really effective as an action film and, thanks to it being a pre-"Hayes Code" film, it also is quite effective with a few of its horror moments. 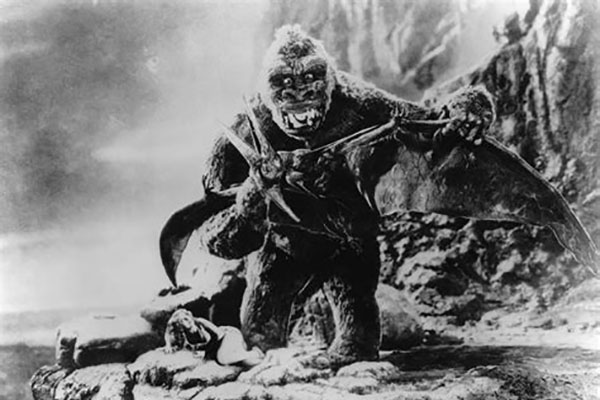 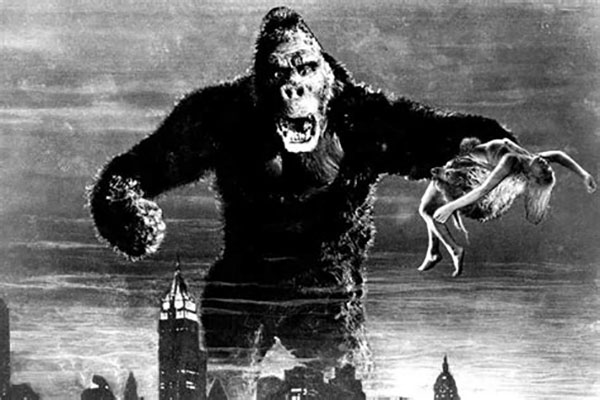 As noted, in some ways the film hasn't aged quite as well as it could have. Fay Raye's character, Ann, is belittled by all her male co-stars and, of course, she's the damsel in distress so she doesn't do anything at all to save herself, not even once. She always has to be saved by the big strong men, especially the one that was a complete asshole to her for most of them film that, naturally, she falls in love with. Meanwhile the islands are about as racist a caricature as you could get of Black people, and there's even one Asian character with a terrible accent thrown in for good measure. Woof.

Still, I tried to set those things aside because the monster action was so good. This is the kind of film where, yes, you have to just acknowledge how awful it was towards anyone that wasn't a straight, white male. It needs a disclaimer in front of it because it will offend people in some places. That said, if you just want to see a 1930s special effects extravaganza, this film does deliver. It's an impressive collection of action scenes that pushed the bounds of what people could do in film in the 1930s. It's hard to watch its politics but the monsters do smash together really well and that part is great.

Now if Hollywood could just nail the rest of it while keeping the action as fantastic as it is here. That's a problem the franchise has had ever since this original film came out...