He Who Walks Between the Walls

There was quite the YA boom for a little while, with every teen-friendly novel series getting turned into a teen-friendly series of films. This was fueled by the success of The Hunger Games, in no small part, but not all the movies to come along after -- The Divergent Series, The Mortal Engines -- could match that kind of success (in no small part because not all of them were nearly as good). 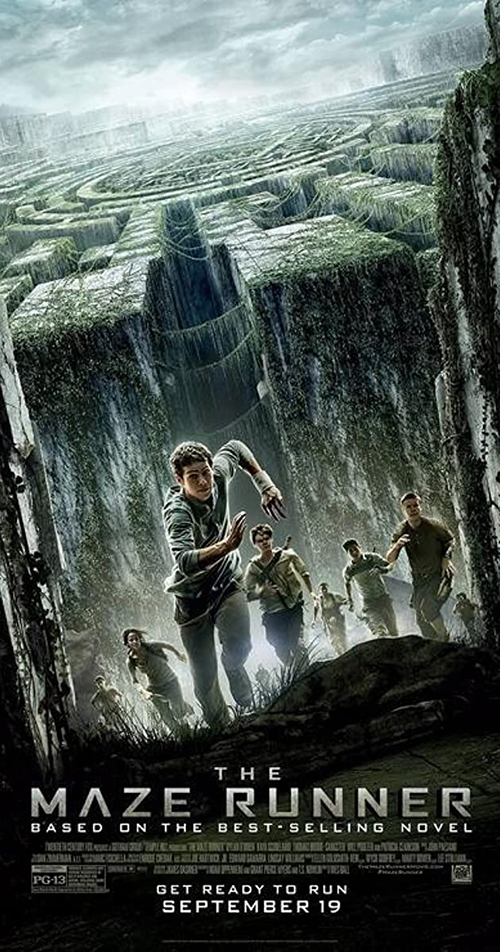 Yet another series to come along during this boom was The Maze Runner, a series of films based on a trilogy of books (plus two prequels that will likely never be turned into movies), and they once again wanted some of that sweet sci-fi dystopian teenage money. The thing is that this first film, at least, was actually pretty good. It had an interesting world crafted for at least this one story, with some cool twists and turns that certainly promised an epic trilogy. While the epicness of the rest of the trilogy really didn't materialize, this first film at least set the series off and running (pun intended) in the right direction.

In The Maze Runner we're introduced to Thomas (Dylan O'Brien), a teenage boy who wakes up in the Grove without any memory of who he is or where he came from. That's a common occurrence as all the boys that have been deposited in the Grove (at least one a month for over three years now) have all come in without any memories except their name. Thomas doesn't know it at the time but, because of his arrival, everything in the Grove is about the change (arguably for the better and the worse).

The Grove is a large, walled glade filled with trees, a river, and a small settlement built, by hand, by the other boys there -- Aml Ameen as leader Alby, Thomas Brodie-Sangster as second-in-command Newt, Thomas Brodie-Sangster as as agro-boy Newt, and a good three dozen more at least. A few of them, led by Minho (Ki Hong Lee) will go running out into the giant walls that surround the Grove, exploring the dangerous maze that lurks beyond. Their hope is to find out what's beyond the maze and maybe, just maybe, escape this lovely prison and find home. But, after Thomas's arrival, one more delivery is made -- Teresa (Kaya Scodelario), the only girl to ever arrive in the Grove -- with a note saying she'd be the last to ever show up. Now, with a growing sense of urgency, the boys have to go out into the maze and find a way to escape before they're all just left in the Grove to die.

As far as concepts are concerned, The Maze Runner certainly finds a novel one. Where other YA films have been obsessed with a single heroine fighting a corrupt government (The Hunger Games, Divergent) or has put kids into schools to learn about their special gifts (Harry PotterFirst released as a series of books (starting in the UK before moving worldwide), the Harry Potter series gained great acclaim before even becoming a series of successful movies. Now encompassing books, films, a prequel series, and a successful two-part play, the series even now shows no end in sight., Percy Jackson and the Olympians), goes for something more akin to Lord of the Flies-meets-The Prisoner. This is a much bleaker, and more mysterious, setup than we've seen from the other works in this genre. 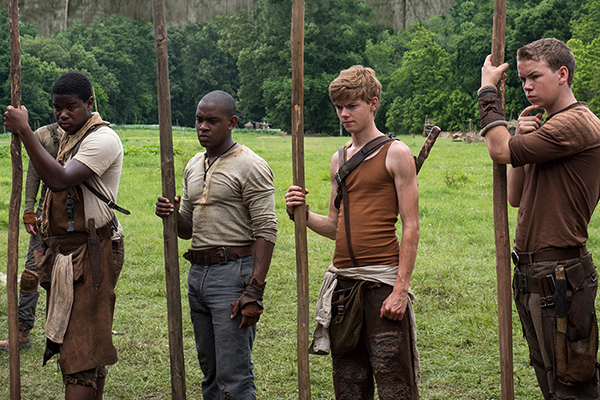 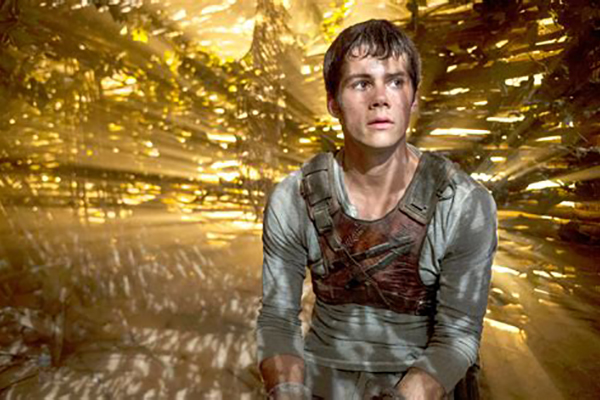 That's actually the film's great strength as the mystery is what fuels the story. Despite all the teens having been in the Grove for at least three years (if their idea of time is even correct) none of them have any answers about what's going on. They don't know why they're there, they don't know what they're supposed to do in the Grove, and they don't understand what the goal is of the maze. The only thing the boys know is that if you stay in the maze after dark, you die.

Of course, there's the usual YA trappings thrown on top from there. Thomas is the one "special kid", the new guy whose arrive is going to change everything. He's the one that can think is way through problems that have stumped other people, that can adapt and find the solutions no one else can. He's Katniss and Harry Potter and Percy Jackson, the hero that will save them all, and he's the same kind of character we've seen in all those works. While Thomas certainly is heroic he's also put up on a pedestal by the other characters and the whole film is told from his perspective, making him the same kind of archetype we always see in these films.

Really, that's a big issue because, beyond his actions (and they're heroic actions), we never really learn anything about Thomas. Sure, we can't know anything about any of the boys before their time in the Glade because that's all they remember, but all of them are developed, interesting characters (like the sly and sarcastic Newt or the strong but understanding Alby) shaped by their time inside the glen. Thomas, though, is too new and he's played like a void. A heroic void, but that doesn't make him any better than a Disney Prince (and maybe even a little worse as some of those guys are really charismatic).

We need more from Thomas than he provides, but it never comes. He's the action-guy, the heroic leader who just kind of takes over, but its all due to what he does, not his personality or who he is. It's somehow "show, don't tell" taken to such an extreme that we don't get any reasoning to backup Thomas's actions. Hell, even Theresa, who shows up halfway into the film, has more personality and charisma than our head boy, and that's a real flaw since we need to latch on to him (especially if we're going to get through three of these films) and there's just nothing here. 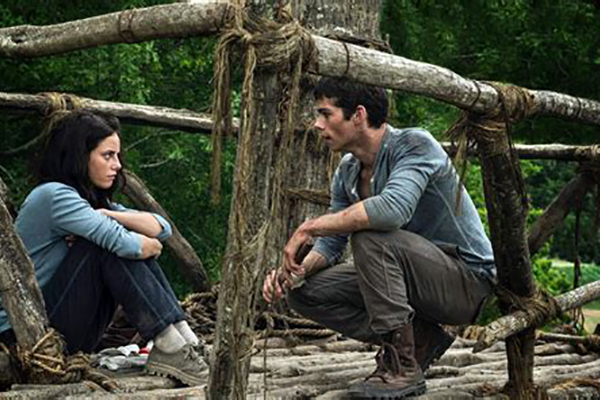 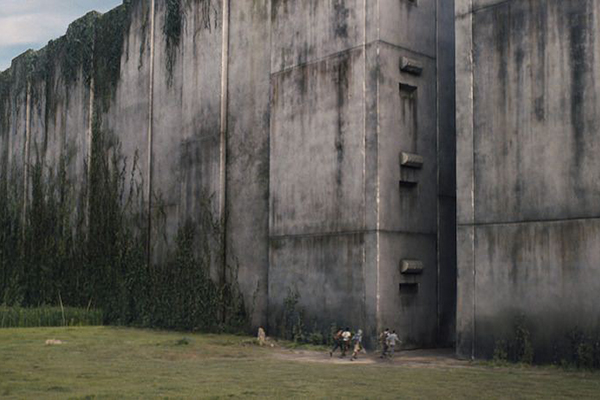 What that leaves us with is the setup: the maze and the mystery. It's a solid enough curiosity for a good hour-fifteen or so of the movie. We are genuinely curious about what dangers the maze holds and we want to see people go out and figure the place out. It's only near the end that the problems here arise because Thomas just randomly stumbles on clues on how to escape that don't seem to have any rhyme or reason. How would any of the kids be expected to figure any of this out -- you have to kill one of the zombie drones that patrol the maze (already an impossible task), hope you keep one specific part inside it from getting damaged, figure out that part is tied to a section of the maze, and then just know to somehow use it as a key. We're told it's been three years since the boys started showing up in the Grove, but it seems like it could have been longer as that whole series of "clues" makes no bloody sense.

And all for what? It's a test, of a sort, all because the world has ended and only the young can survive the disease that came along with the global catastrophe. So the best way to find the kids that can survive the disease is to lock them all away and let them get tortured by an unforgiving maze and zombie drones? How does that train them for anything or let the scientists know anything about the deadly disease? It's makes absolutely no sense and undermines the whole film.

The end of the movie (and, honestly, the films to come after) reek of the original author having a super compelling idea for a single book -- kids trapped in a maze and they have to escape -- and then he didn't have any idea how to extend it, so he just slapped the usual YA trappings on top and then came up with some BS mythology to try and extend it. None of it works once you start to think about it. It's a series in search of an epic storyline when it would have been perfectly find as a one-off film.

Taken as a single movie, without the end section that muddies the waters, I rather like The Maze Runner. Even with the void of a lead character the action is good and the mystery remains compelling (right up until the film falls apart). It's a solid one-off adventure hobbled by the fact that YA films can't be one-off movies. It's a pity the series had to ruin this one solid idea because it really works... right until it doesn't.