Getting a Little Divine

Percy Jackson and the Olympians: The Lightning Thief

Having watched through the whole Harry PotterFirst released as a series of books (starting in the UK before moving worldwide), the Harry Potter series gained great acclaim before even becoming a series of successful movies. Now encompassing books, films, a prequel series, and a successful two-part play, the series even now shows no end in sight. series, my original plan was to then go and start in on the Fantastic Beasts prequel series. However, only one of those movies is as yet available on home video, and I see little point to start in on a series when I can't really watch much of it. Instead, it occurred to be that I could go in another direction and cover a series that was essentially "like Harry Potter, but..." So, instead I want to talk about Percy Jackson. 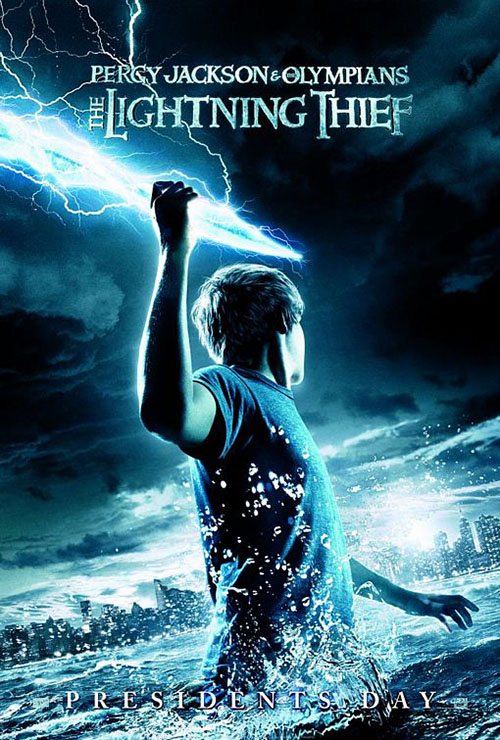 For those unfamiliar, the Percy Jackson films (of which there were two, so far at least) follow the adventures of the titular hero, Percy (Logan Lerman) is the son of Neptune, although he doesn't know it when the adventure opens -- he just thinks he's a normal kid with normal problems. But then magical creatures start showing up, demanding he hand over Zeus's lightning bolt (which is apparently missing and, for reasons the film doesn't really delve into well, everyone thinks Percy stole it). Suddenly he's whisked away by his best friend, Grover Underwood (Brandon T. Jackson) -- who also happens to be a satyr and Percy's sworn protector -- and taken to Camp Half-Blood, a outdoors school designed to train demigods in their abilities so they can grow up to be leaders.

In the process, though, Percy's mother is seemingly killed and the only way to save her is to go to various locations, collect treasure, and head to Hades to bargain for her life. Oh, and somewhere along the way he has to find the lightning bolt, and the thief that stole it, and put an end to a potential way at Olympus.

By it's design, Percy Jackson (at least in book form) draws direct comparison to the Harry Potter series. They're both YA film adaptations about a boy who grows up normal until weird things start happening to him, at which point he learns he's actually special, a potential "chosen one". Then, due to circumstances outside his control, the young hero and his two friends (in this case the aforementioned Grove along with Annabeth Chase, daughter of Athena, played by Alexandra Daddario) have to step up, gather the material they need, and go on an adventure to save the mythical world they now call home. Swap in Greek Gods for Wizarding World and, at first blush, the two movies seem to be made from the same mold.

Part of that sense of deja vu comes, in no small part, from the fact that this first Percy Jackson film was helmed by Chris Columbus who also directed Harry Potter and the Sorcerer's Stone and Harry Potter and the Chamber of Secrets. For a movie studio looking to craft "the next Harry Potter," the decision to bring Columbus on makes perfect sense. The unfortunate thing for Percy Jackson is that Columbus is an artless hack director who should never be allowed to touch a burgeoning fantasy franchise. I mean, really, go look at some of the other films he's directed (Bicentennial Man, Adventures in Babysitting, Pixels) and tell me if you'd trust him with your franchise. 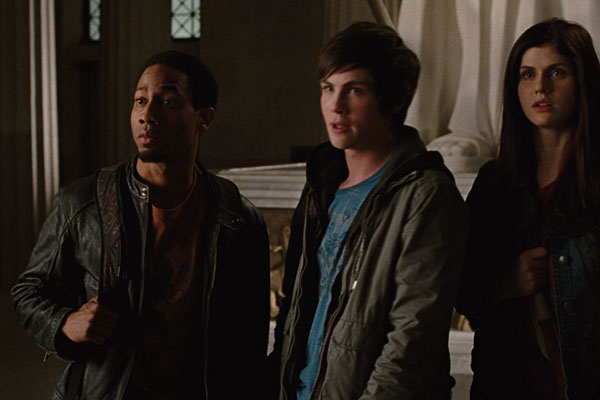 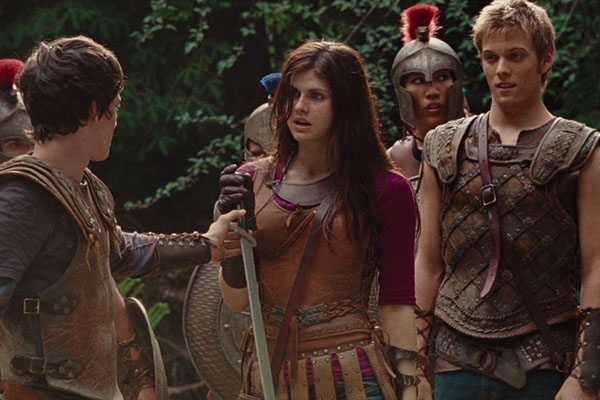 It's amazing, then, that Percy Jackson and the Olympians: The Lightning Thief is any good at all. Despite the hacky directing, low-budget special effects, and plodding storytelling, the film weirdly works. It's not a good film by any stretch of the imagination but it does have its moments of fun that help to elevate it, however slightly, from YA also-ran.

To start, the story manages to actually have fun with its setting and scenario. While the first two Harry Potter films tried to inject fun into the proceedings, it was always with this wide-eyed "look at this magic" vibe, slowly dragging the special effects across the screen for much longer than I had any patience for. Whatever whimsy could be found in those films was drowned under a need to drag a moment out long past when it was necessary. The films wanted to say "look, this is fun, have fun damn it!" By comparison, Percy Jackson injects humor into the script, letting the hero crack jokes at the magical setting. His wide-eyed act isn't because the setting is cool but because everything around him sounds so dumb. Having the hero acknowledge that helps to make everything seem less self-serious and more fun.

It also helps that the actors in the lead roles have a lot of chemistry together. By grace of the fact that the actors were older (and playing older characters) in Percy Jackson (mid-teens instead of 11-year olds in Harry Potter), their acting is more assured. They're able to get into their characters, actually playing people instead of trying to learn how to act while saying their lines. I never hated the Harry Potter actors but Percy Jackson makes a strong case for waiting a couple of years before casting an ensemble to headline your fantasy saga.

Of course, at least one of the leads, Alexandra Daddario, would go on to have a larger career after these two films, and watching her here it's obvious why. Her Annabeth is easily the best character in the movie, a strong and power character in the mold of Hermoine Granger without the self-doubt or nasty personality (because in Sorcerer's Stone Hermoine was kind of a jerk). She also makes the case that maybe she should have been the lead hero, not because she's better written that Percy but simply because Daddario has such an on-screen presence she largely steals the show from Lerman's Percy. I liked Percy (and Grover, for that matter) in this film, but it would have been nice if the movies had done better so Annabeth could have been given her own spin-off. She should have been leading this series. 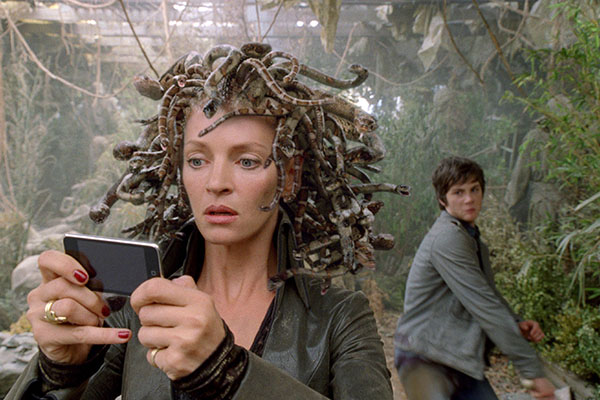 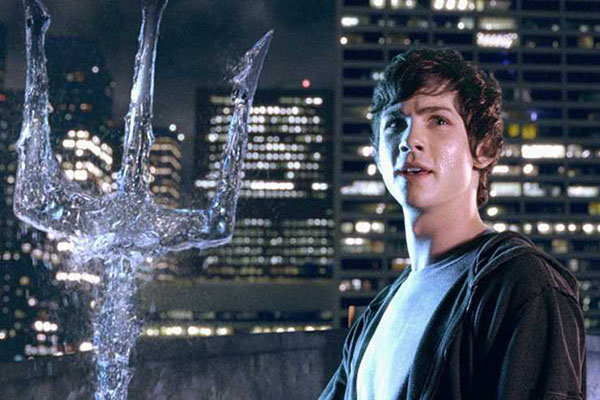 Percy is a good character, make no mistake. The film gives him more personality, and more agency, than Harry Potter ever had. Events in the film don't just happen around Percy but because of him, with the whole quest being his idea. He actively leaves the camp to save his mom, he actively engages with the various monsters they fight, and it's often his ideas that get them out of various scrapes. There's no question why Percy is the hero of his own movie (even if Annabeth is the more interesting presence). I found Percy to be an engaging presence in his own right and a decent guy to anchor a film.

It just would have been nice if the story around the characters was more engaging. The Lightning Thief is basically a dungeon crawl -- the heroes get their quest and then go linearly, from one point to the next, collecting three treasures they need so they can then proceed to the end dungeon, fight a final battle, and save the day. The whole story is set out from the beginning, and then the three heroes follow the quest along the plodding path right to the end. It's not a very engaging story, with no twists or turns along the way, and it's really easy to tune out of "why" the heroes are bothering with the quest at all.

That said, the set-pieces within the adventures are pretty decent. There's a sold battle with a hydra that has some decent energy to it (and would have been better if the CGI wasn't terrible in this film), and there's a pretty good stop-over in Medusa's den. Each section shows a little bit of creativity (presumably derived from the source novel) often finding a way to incorporate ancient Greek myths into a modern setting. I like the moments in the movie even as the whole of it fails to amount to much.

It's a problem Percy Jackson and the Olympians: The Lightning Thief just can't overcome. While the cast has energy and the story has moments, on the whole everything just feels very meh. I had fun watching the movie (both times I've sat through it, in fact) but by the end of it I struggled to remember much. Considering it wasn't that successful (only making just over double its production budget), that would appear to be the consensus amongst the viewing public. This film was just good enough but not anything special. And yet, somehow, it got a sequel anyway...