Launching a YA film series can be difficult. You first have to have a successful YA book series to work from, one that will pull people into theaters just from the name alone, and then you have to produce good movies people will actually care about. For every successful series (Harry PotterFirst released as a series of books (starting in the UK before moving worldwide), the Harry Potter series gained great acclaim before even becoming a series of successful movies. Now encompassing books, films, a prequel series, and a successful two-part play, the series even now shows no end in sight., Hunger Games, and Twilight), there are also plenty of also-rans that didn't quite make the cut (Divergent, Maze Runner, and Mortal Engines). It's a problem of conveying a story people will care about long enough to watch three, five, or ten movies all to finally get an ending to the story. Some series can do it, others just can't. 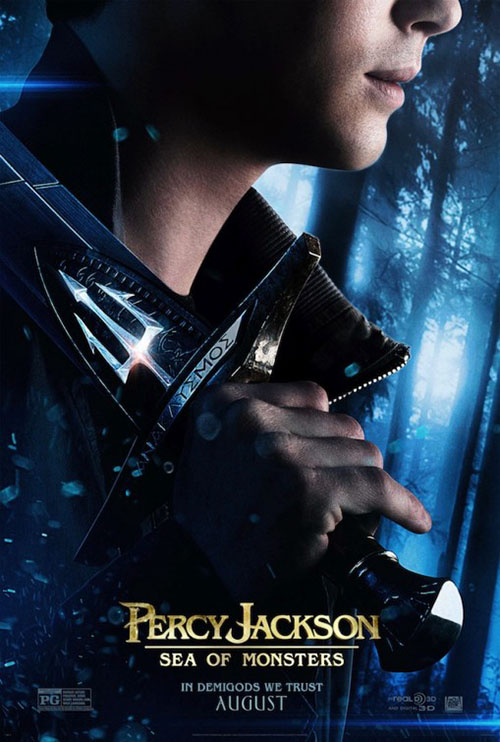 Getting added to that list of series that didn't quite make the cut is Percy Jackson. As I noted in my review, the first film in the series, Percy Jackson and the Olympians: The Lightning Thief, was a pretty decent movie for a YA adaptation. If we use Harry Potter as our barometer, then Lightning Thief certainly was just good enough to be a franchise starter -- it was certainly as good as, or better, than Harry Potter and the Sorcerer's Stone. The problem, of course, is that Percy Jackson isn't a household name in the same way that Mr. Potter is. The Boy Who Lived set the world on fire for years, and his movies sold like hotcakes. Percy, by comparison, just doesn't have that name recognition. His movie couldn't just be "good enough".

That why it was surprising that the movie gained a sequel, especially three years later and when no one really cared. No one was clamoring for a second Percy Jackson, and certainly there weren't any lingering plot threads that needed to be addressed after that first movie. Hell the sequel, Sea of Monsters, is the first time any long-form world building is established, giving us a prophecy about how Percy may be the demigod to either destroy Olympus or save it. The first movie is a self-contained little romp; it's the sequel that has aspirations to be a big, epic, multi-part series. It's kind of ironic, then, that this film is also what sunk the franchise.

In Percy Jackson: Seas of Monsters, we're brought back to Camp Half-Blood where Percy, along with his friends and rivals, train for their eventual lives out in the real world as global leaders. The camp, it should be noted, it protected by a magical tree -- the tree casts a shield over the camp, keeping the kids safe from any mythological beasts that might want to harm the teens. That tree, though, suddenly starts dying one day, all because it's been poisoned by Luke (Jake Abel), son of Hermes, a demigod with a serious chip on his shoulders toward the whole of Olympus. Percy (Logan Lerman), son of Poseidon, along with his friends -- Annabeth (Alexandra Daddario), daughter of Athena; Grover (Brandon T. Jackson), satyr protector of Percy; and newly discovered cyclops half-brother of Percy, Tyson (Douglas Smith) -- have to track down the Golden Fleece, the only thing that might save the protector tree.

Unfortunately, Luke is also looking for the fleece. He wants it so he can resurrect Chronos, the ancient Titan and enemy of the Greek Gods. Chronos was defeated (and killed) by the Gods millennia ago, but Luke thinks the fleece is powerful enough to bring the Titan back from the dead. And if Chronos is back, the Gods will fall. Percy has to get the fleece, keep it out of Luke's hands, and save the tree, or everything he knows and loves will fall. 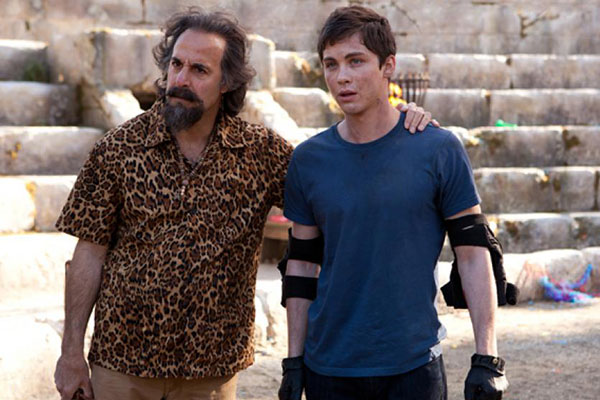 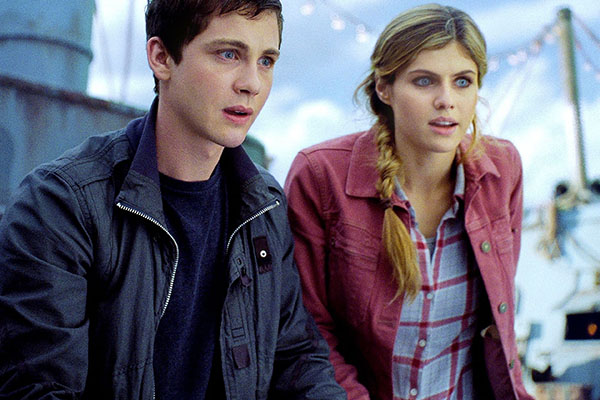 While The Lightning Thief was a simple, lithe romp, sequel Sea of Monsters struggles under the weight of all the world-building it has to do. We not only have to learn about the fleece (which will save the three), but also about cyclopes and where they come from, Titans and their war with the gods, and get introduced to a whole new set of demigods, most of whom won't be worth remembering five minutes later. So many details are raised, given back-story, and then dropped so we can move on to the next scene. Obviously, a lot of this detail was raised so we could have more to work with in future movies, but that's a folly too many series-building movies fall prey to. Movies that spend too much time telling us about "important things" that will become relevant down the line fail to give us enough story for us to care about right now.

For instance, Chronos is obviously introduced in this movie to serve as a big bad moving forward. In essence, he'll be the Voldemort to Percy Jackson's Harry Potter. Chronos, though, is barely a character in this movie, a CGI creation given a couple of minutes screen time before he's shuffled off for a future adventure. He's given a back-story for us, a three-minute cut scene that's dropped on us part way into the movie, and then we largely forget about him until the big climax. Voldemort had a personal connection to Harry and is a constant, deeply feared threat to the world, but Chronos is a god that lived and died so long ago most of the characters don't even remember him. He's not an effective villain, at least not the way this film sets him up.

A decent villain would actually be Luke, who is a sort-of stand in for Draco Malfoy (if we're going to carry out this analogy). Luke already appeared in the previous movie, has a connection to Percy due to their previous battle, and has real motivation to want to rid the world of Greek Gods (and their demigod offspring). If Luke had been the real focus of the film then the climax would have had real impact. As it is he's about as ignored as Chronos, another character glimpsed a couple of times before being shuffled off for some other spot of world building.

It should also be noted that Luke and Chronos aren't the only villains in this film. There's also Clarisse La Rue (Leven Rambin), daughter of Ares and Percy's rival at Camp Half-Blood. She's the kind of full-of-herself antagonist that is bound to get into trouble when she finally really goes up against Percy (so, essentially, a second Malfoy). For the few times we see her, she's rubbing salt in Percy's emotional wounds and being a real jerk in general. And then, suddenly, she face-turns and becomes Percy's ally without any motivation. It's jarring and doesn't make much sense. She either needed way more scenes that she got to develop her relationship to Percy better, or the film needed to commit to her being simply a rival, or ally, of the hero from the beginning. Or, better yet, just cut her so other important characters could have been given more screen time and development. 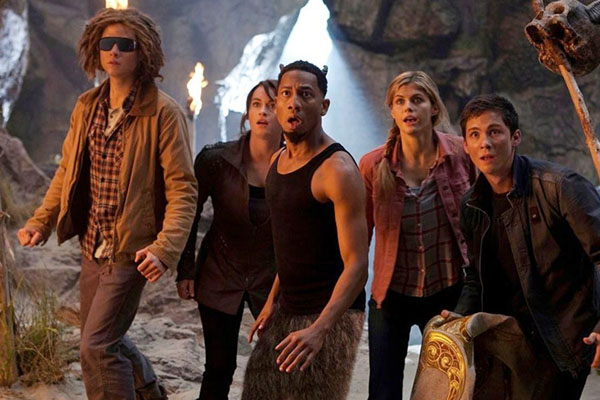 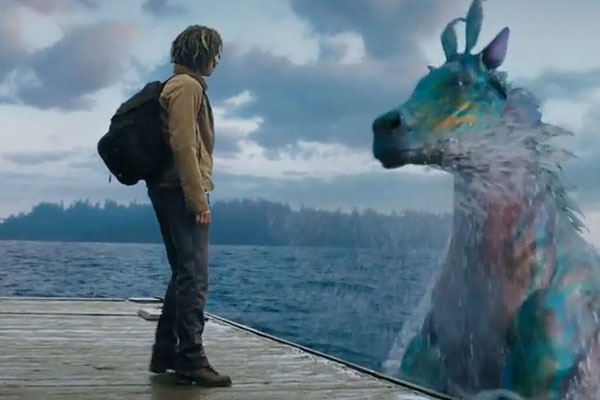 Even the returning characters we do know, and like, are poorly handled. Grover, Percy's friend and comic relief, was a bright spot of fun int he first film. Here, though, he gets captured by the bad guys at the end of the first act and then we barely see him at all until the climax. In his place we have Tyson, a nice enough character but not anyone special. He's basically there to make Percy feel good about himself and, occasionally, get Percy out of a jam. He's Grover, but without all the background and personal connection to Percy (all of which has to be forced into this already overstuffed movie).

Annabeth, meanwhile, was Percy's original rival/ally in the first film. Daughter of Athena, goddess of wisdom and war, Annabeth was a strong character who could think on her feet and handle herself in any battle. She ruled the camp, basically, until Percy showed up. In the sequel, though, all the tough aspects of her character are forgotten, given over to Clarice instead. Annabeth goes from a warrioress to the damsel sitting on the sidelines watching her hero fight the battle. They ruined her character, making her weak and uninteresting, all because, what? There can't be two strong, female characters in a single movie? It makes no sense.

In short, Percy Jackson: Sea of Monsters is an absolute mess. It ignores the few things the first movie did well, mutilating the personalities of characters we liked all to focus on people we barely know. It stuffs in a lot of details we don't care about all to launch a series of films that will never happen. It's story is unfocused, it takes too long to get anywhere, and then it just ends, expecting to have more movies to tell a longer story. It simply isn't able to tell any kind of story audiences could care about. I guess it's a good thing, then, that the film series ends here -- I'd hate to see how much worse they could have butchered this series moving forward.

If you're already managed to get through all the harry Potter films and want another hit of YA fantasy fun, you could do worse than the first Percy Jackson. For instance, you could watch this movie. Don't do it. Avoid Sea of Monsters and pretend the first film in the series was a one-off. You'll be happier.