The Gang Moves On

Daria: Is It College Yet?

It's fitting that I'm writing this article right as we reach the end of summer, as the college student head off to a new school year and all thee high school graduates truly leave their old lives behind, since this second Daria movie is all about kicking the students out of Lawndale and forcing them to move on with their lives. "Is It College Yet" serves as the series finale for the series, the last episode of a season that started with the first made-for-TV movie, "Is It Fall Yet?", before moving on to a short, 13-episode final run for season five, so there's a lot of pressure on this movie to act as a proper finale for everything Daria. 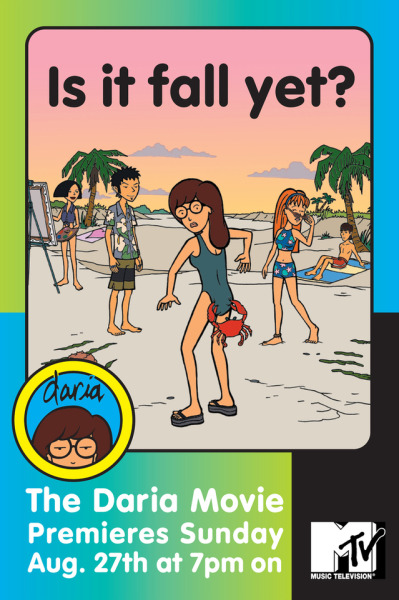 Unlike the opening movie for this season, which capped a lot of story beats that were started in the previous years before kicking the characters forward for their final run, "Is It College Yet?" doesn't really have the focus or plot beats to work with to really feel like a proper cap to the season (or series). Sure, it moves characters forward but in such a way that you still expect more from them, as if this wasn't going to be a series finale, just a temporary pause before we got Daria and Jane: The College Years. Because of that, this movie is nowhere near as satisfying as it should be.

The A-plot is focused on Daria trying to figure out what college to go to. One of the schools on her list, Bromwell, is an ultra-upscale private university, one that her boyfriend Tom is already a lock to go to (since his family has donated oodles of dollars to the school of the years, making the family an veritable institution on campus). Daria wants to go there as she thinks its the best school on her list and the opportunities she'd gain from it would be huge. So she goes on a trip with Tom and his mother to see the school, but she also wants to check out a couple of other universities on the trip (namely Raft College in Boston). Sadly, Tom and his mother get caught up with events at Bromwell and basically run out the clock on seeing any other universities (unintentional as it may have been). Daria ends up angry because they didn't give her due consideration -- obviously Tom's life is locked up, so why worry?

This leads to Daria trying, and failing, to get in at Bromwell while, the entire time, she's already been accepted to Raft. Discussion with Tom over the matter doesn't go well and, eventually, Daria dumps Tom. She says it's because she and Tom are getting bored with each other and, with the distance between their schools (since she eventually settles on Raft after all) they really should just split.

Thing is that after watching all of season five (and seeing how, at times, Daria was a pretty awful girlfriend), I don't know that I really buy into the sudden breakup. Sure, I get Daria doing it -- she's already tried to break up with him a couple of times before because she's emotionally distant and doesn't let people in -- but while Tom's family may be a tad oblivious there certainly didn't seem to be any malicious intentions on their part. Plus, while Daria says they don't have anything in common and were getting bored with each other, they seemed pretty actively engaged throughout the season, talking books and movies and the like. The case for them not having anything in common, then, is pretty shaky. It's more like the writers decided she needed to break up with Tom to have her own "moment" but didn't really build it up properly. 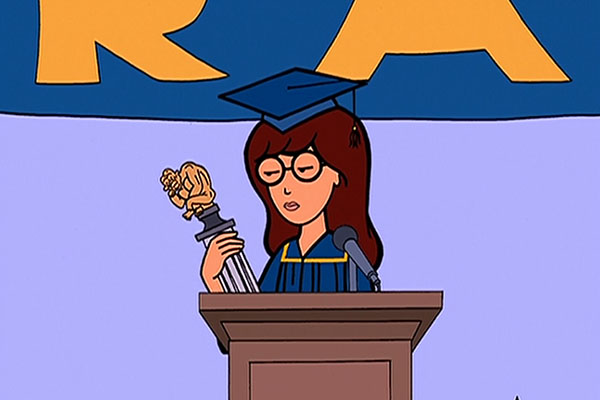 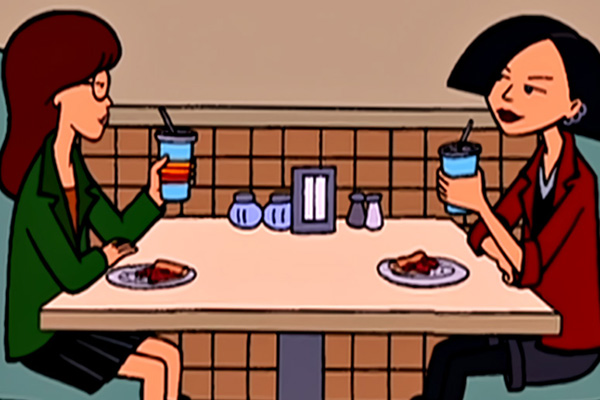 Jane storyline is much better, showing real development for the character. After she gets rejected from the two local colleges that she applied to, Jane is left dejected. Neither of the schools were her first choice -- she really wanted to go to Boston Fine Arts College -- but the rejection from the smaller, crappier schools makes her decide to skip college altogether and just be a traveling artist (like everyone else in her family). It takes time for her to come around, to be willing to put in the effort and get her portfolio together, to apply to BFAC where, indeed, she does get in. Considering the flighty nature of her family, their desire to just coast along doing whatever art makes them happy, this storyline feels very true to Jane and, as a bonus, it sees her grow a little and find a path for herself that her family members wouldn't have taken. A harder, but more fulfilling path.

Meanwhile, Jodie has struggled under the control of her parents for years (a storyline developed in "Is it Fall Yet?" and brought to fruition here). Jodie's parents have always tightly controlled her schedule, volunteering her for internships, summer jobs, and anything else they can think of to pad her resume and make her a successful career woman right out of the gate. While their heart is in the right place, all they've managed to do is make Jodie in to a tightly wound type-A personality who never has any free time to herself, ever. Jodie wants to change that, to get out from the life they have set for her and go to a fulfilling, slightly less prestigious (no no less good) university, Turner, but her parents won't listen. It takes her boyfriend, Mack, stepping in and having a conversation with her father about it to change their perspective.

I appreciate the idea of this, that Jodie needs to find a way out of her parents' control. That said, i think it would have been better if Jodie could have done this for herself. Having Mack step in and have a man-to-man talk with Jodie's father seems a little denigrating to Jodie -- the girl can't take care of herself so her big, strong man has to do it for her. Involving Mack is one thing; if he'd tried and failed to get through to her dad before Jodie stepped in and did it for herself, that would have been great. Instead, the show leaves Jodie as a passive object in her own plot line, a bad angle for the show to take when it's usually so good with its female characters.

But then, Jodie's story is still better than the two C-plots of the movie. In one, Mr. O'Neil accidentally proposes to Mrs. Barch, his dominant girlfriend, and he has to find a way (with the help of his friend, Mr. DeMartino) to get out of the impending nuptials. The characters don't grow in this story and end up right back where they started once the simple misunderstanding is sorted out. I get the desire to give a plot line to the teachers -- they've been constant forces on the show this whole time -- but this story is so disposable it could have been ditched in its entirety.

By that same logic, Quinn's story is also nothing but padding. The teen has racked up such a large shopping bill that Helen and Jake force her to get a job, so she settles on being a hostess at a restaurant. While there she befriends Lindy, the other hostess who is also a college student. The two strike up a quick friendship but Quinn soon realizes her friend has a drinking problem. She tries to point it out but Lindy makes up excuses before cutting her out of her life. By the end of the episode they have a bit of a make-up session, but nothing is really resolved. 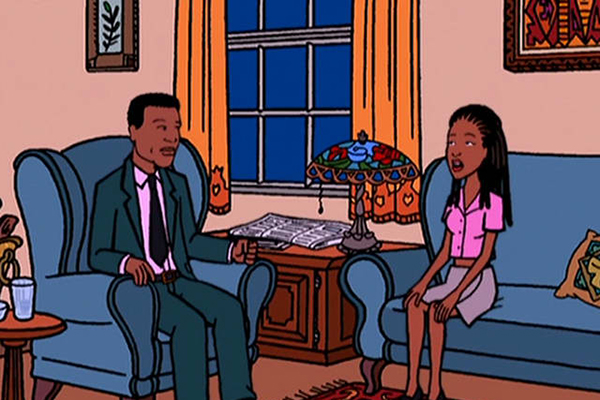 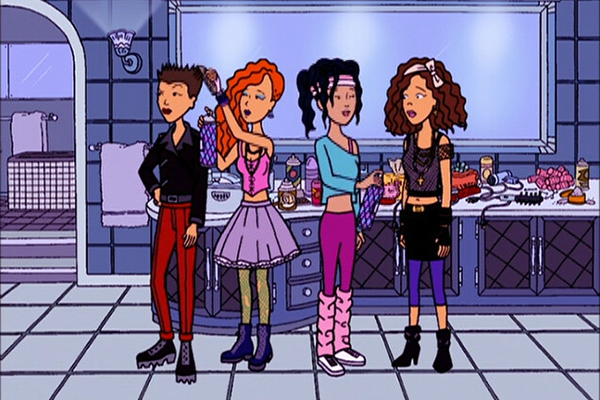 Now, don't get me wrong, I understand that alcoholism isn't something that can just be treated, from diagnosis to resolution, in a single C-plot, and the show doesn't try to make it out like suddenly Lindy is cured after a single heart-to-heart. But the flip side of that is the fact that the show should have developed this storyline over several episodes (maybe as Quinn's recurring storyline for season five) so that by the time this movie ends, some kind of resolution could be reach. Instead, this storyline just feels like an after-school special about drinking stitched in as a forgettable storyline to padding out the film.

Which brings me back to my overall issue with this movie. For some of the students we get decent progress forward. We get to see them start to move on, but the movie doesn't really push them far enough that we get proper closure for any of them. If the show had intended to continue on past this point (either under its original name or maybe as a spin-off, like the proposed "Mystik Spiral" show that never went anywhere) I could see leaving some of these items hanging (what happens at Raft? Do Jane and Daria remain friends when they're going to separate schools? Is Quinn ever able to get through to Lindy?). Instead, the film just ends, leaving us hanging as if ten minutes (or an entire extra season) had been cut from the run time. "Is it Fall yet?" served as a great capper for season four and a strong way to introduced season five, but "Is it College Yet?" just ends on a whimper. The series deserved better.

Edits to the Home Video Release

I want to note that some of my complaints with the movie are apparently due to the edited nature of the home video releases. The Biggest edit is the removal of an extra scene between Daria and Tom where he invites her out on a date and, after a pause, she brushes him off so she can continue writing a story she's been working on. This helps to show that, yes, she has other priorities than Tom and, in the right context, could have shaded in the fact that maybe she really was getting bored with him.

The other major removal was more of the conversation between Mack and Jodie's father. Basically it elaborates on the strain Jodie is under and how much Mack thinks she needs to be away from the pressure, to just go to a school she would love. While this scene does help to flesh out Jodie, it does so in a "tell, not show" way and still fails Jodie since it would be better if she could have had this conversation. It's helpful, but doesn't really change the context that much.

Overall the edits do flesh out the movie a bit but I don't feel like the redeem it overall. Still seems like it would have been better if the film could have just trimmed the useless storylines of the teachers and Quinn/Lindy and focused more of the big three characters -- Daria, Jane, and Jodie -- to make it feel like they had real closure on their stories before the series came to an end.