Going through and watching the previous seasons of Daria, it's pretty easy to see how the characters age and grow. There's a clear timeline for the series, with seasons one and two comprising the sophomore year of high school for Daria and Jane, while seasons three and four were their junior year (freshmen year, then, was Daria's time on predecessor series, Beavis and Butthead). That gave the show a definite end-place, at least for its high school years. That's where season five comes in. 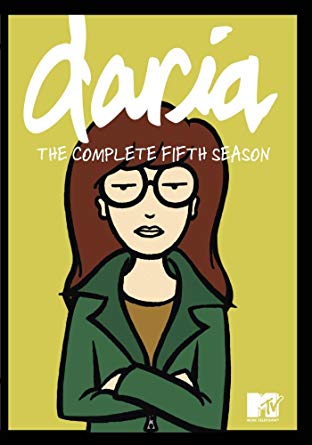 Really, the final year of Daria was broken into different chunks from the previous high school years. Season five was bookended by two mad-for-TV movies, Is It Fall Yet? as its intro and Is it College Yet? as the series finale. That leaves us with only 13 standard episodes to wrap up the main series and, honestly, they aren't the strongest episodes of the run. And all the blame for that rests on Daria's pairing with Tom.

The thing is that I think putting Daria in a relationship and forcing her to react to a new person is a good idea. Daria has to be shaken out of her comfort zone as, otherwise, she'd continue to sit in her room, being sarcastic, while everyone else tries new things, looks at all the options of life, and experience all that the world has to offer. Daria is an introvert, one with high standards who feels like the world always lets her down so why go out and explore it; people, and society as a whole, will only hurt her. Giving her someone new, someone that she has to take into account, to learn from, to grow around, is a good concept. Unfortunately the show doesn't do a great job of implementing the relationship.

When I discussed the fourth season I commented that Tom wasn't exactly a great character. He was a foil, but he didn't get a lot of depth. That was corrected in the first movie, Is it Fall Yet?, with Tom getting some much needed development to become a real, fleshed out character. That growth continues in the fifth season with Tom working to help Daria, allowing her to bounce off of him, to find new outlets all while he tried to make her feel safe and welcome. When she'd inevitably lash out because of something or other that didn't meet her high ideals, Tom tried to help her see that she was accepted and, when possible, he'd work with what she wanted to grow their relationship. He was a strong, supportive boyfriend.

The fault, really, lies with Daria. In short, Daria is a terrible girlfriend. As she admits during the season, she's never been in a relationship before and thus has no clue how to really act, how to trust. As such, everything little thing she sees Tom do, or things he did with Jane before he started dating Daria, sets Daria off on a cycle of blaming Tom and hating him, often without telling him why he's in trouble. Then, inevitably, she learns some lesson and realizes what she did that was wrong before apologizing and getting forgiveness from Tom. Once or twice in the season this plot line would have been fine, but this is basically the only plot line Daria and Tom have. It gets tiresome quickly and ruins all their stories. 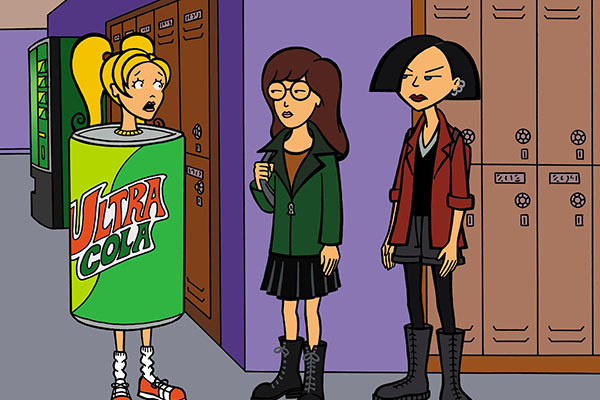 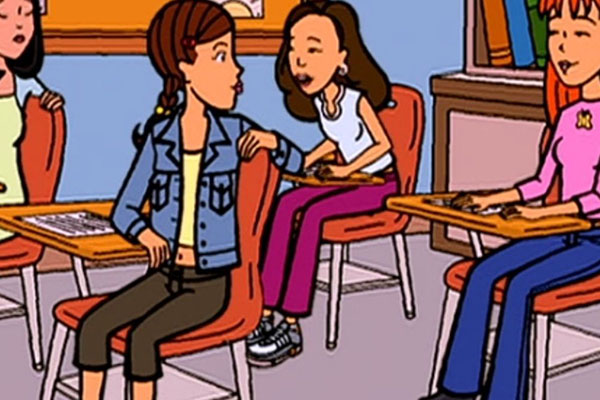 Not that the other characters gain good storylines in the process. Jane, for instance, is stuck in a rut the whole time. She gains a new boyfriend in "Life in the Past Lane", someone who is really into retro fashion and styles, but by the end of the episode she's realized he's a phony and is back to who she was beforehand, remaining unchanged in the process. She has another episode in the season with her brother Trent, "Art Burn", and it uses her family (like a similar episode in season four). This time around, however, we gain no new insights into her family and, by the end of the episode, everything is exactly where is started. Jane really doesn't gain anything new about her character while Daria is off screwing up her relationship with Tom.

Honestly, the only character that really gets any new facets to her story is Daria's sister, Quinn. She has a great episode, "Lucky Strike", where she learns she can actually be smart while her Fashion Club friends continue to be dumb. It builds nicely off "Is It Fall Yet?", continuing her growth from that movie, showing that the lessons she learned there continue for her into the future. Plus, this is the first episode where Quinn actually acknowledges that Daria is her sister, and is even proud of her. It's real growth for her character, much needed growth considering how little character has evolved up until now.

The other character that actually shows any kind of life is Daria's father, Jake, of all characters. While he's still mostly a big, dumb foil -- see episodes like "One J at a Time" where Jake is obsessed with a squirrel terrorizing the neighborhood or "Sappy Anniversary" where Jake joins a tech start up and acts like a confused old man -- he does have one great moment in the last episode of the season, "Boxing Daria". Here, Daria is suddenly obsessed with a past memory of her parents having a fight over her when she was a little child. Daria didn't play well with others and essentially refused to engage with anyone her own age (which, really, is how she is now as well). When she finally confronts her parents over it, Jake admits it was tough raising Daria but that the blame wasn't on her; she's a brilliant kid and that their struggles to keep her happy were part of their job because she was brilliant. It's a sweet moment, something Jake doesn't get very often.

Still, it would have been nice for more characters to gain those kinds of moments. Jodie, the other worthwhile character in the high school, is barely seen for much of the season and only gains one real episode, "Prize Fighters", where she has substance... and then it's only to act as a foil for Daria. Most of the teachers are wasted in every episode that isn't "Lucky Strike", and Miss Li (the principal) is completely useless throughout the entire thirteen episodes. Even reliable funny characters, like Kevin the Q.B. or Britney the head cheerleader, are all but abandoned this season, leaving little time for Daria to react to them and crack her usually reliable jokes. 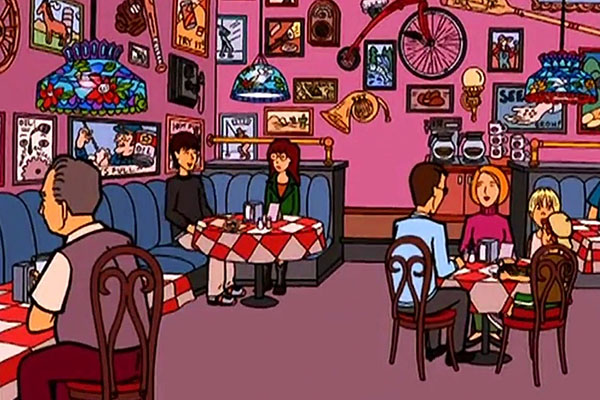 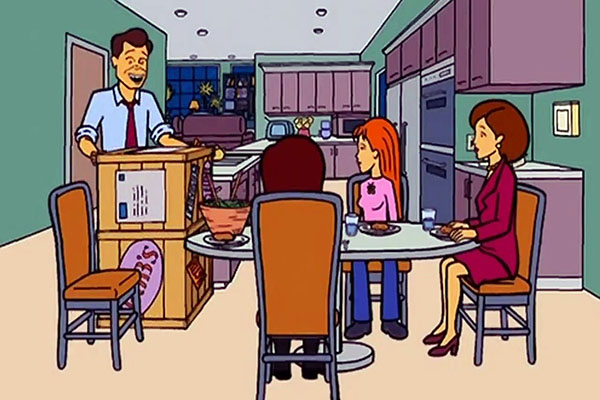 Really, it feels like so much of the season comes back to the decision to put Tom and Daria into a relationship and then only having 13 episodes to tell their story. A lot of time is spent on the two characters when if the show had had two full seasons to go over their story, and everyone else's in the process, it could have had more time to breathe and act like its usual self. I don't know why, specifically, the show only had 13 episodes for the final year of high school (plus the two movies), but it short-changed all the good bits of the show and failed the characters in the process. There are good moments in the final season of Daria, but its nothing like the previous four seasons of the show.

The episode tries to tackle the subject of corporate sponsorship in schools. At the start of the episodes it's revealed that the school is suffering budget shortfalls. To make up for it, Miss Li signs a sponsorship deal with Ultra Cola, but soon the soda company is taking more and more liberties until the school is one giant mass of ads. And, of course, Daria is on the sidelines grousing about it the whole time. The thing is that corporate sponsorships in school can be a very bad thing -- do we really want Google providing learning materials on copyright enforcement (when those materials are obvious giving students a favorable view of Google in the process)? Should M&Ms really provide health and nutrition lesson plans to schools? No, more than likely not, and this is a subject worth bringing up and discussing.

The problem is that this episode tries to tackle the subject, with Daria as the voice of reason. But then, in the back half, the show pushes the idea so far past the point of reality that the message is lost in the cartooniness. Any good points are drowned out in the idea that "this could never really happen", betraying the core message of the episode. A total waste of a good idea that, ultimately, goes nowhere.

Seriously, this episode is great. While the teachers are striking we get a story about Daria being roped into teaching an English class. We also get that great character development for Quinn, and good growth and bonding between the two sisters. It's a standout episode in a season that was otherwise only ho-hum.