We Are Mystic Spiral... Until We Aren't

With the setting and characters of Lawdale established, it was time to start pushing Daria outside its well established comfort zone. At least, that seems to be the plan for seasons three and four of the show as new characters were added, new settings established, and now interactions were developed all to get the characters to evolved from who they were into who they were going to be. 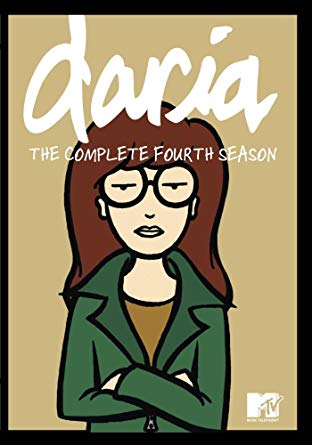 The need to try new things is quickly established in the third season premiere, the horrifying musical episode, "Daria!". On the one hand, this episode is absolutely abyssmal, perhaps the worst musical epsiode of any series I've ever seen (we'll tear into it in greater detail below). That said, the fact that the show was willing to attempt a musical episode, one that focused on all the major charcaters of the show (and wasn't just one long Mystic Spiral video episode) illustrated the producers desire to try new things with the series. I remember this episode being well hyped by MTV at the time before it hit the air, a big moment for the series as it grew beyond it's simple, sarcastic early years.

From this first episode the series kept trying to change itself and its characters as well. The second episode of third season has Daria trying out contact lenses and realizing she actually cares about the way she looks (she'd prefer to not wear glasses even if her contacts hurt her eyes). From there we push the characters outside of Lawndale for the stranges, all-encompassing holiday episode ever, "Depth Takes a Holiday". Then we see rifts begin to grow in the Fashion Club as Quinn starts to drift away from her peers by inches starting with "Daria Dance Party". And then we get some needed fleshing out of Jane's family, actually meeting more than just her and her brother, Trent, in "Lane Miserables".

But by far the biggest change to the series came near the end of the third season when Jane found a boyfriend, Tom, in "Jane's Addition". Daria is immediately angry and jealous over the addition of a new member to their duo as, she is willing to admit, she doesn't have any friends besides Jane and if Jane goes off with someone else, where does that leave Daria? This thread continues over the course of fourth season as Daria and Tom butt heads before, surprisingly, developing a bond and, at the end of fourth season, kissing. This, naturally puts a strain on Daria's friendship with Jane, a story thread that won't get resolved until the first of two made-for-TV movies, Is it Fall Yet?, which takes place between seasons four and five.

Did the show need to add in a boyfriend and then use him as a wedge between the two characters? I'd argue yes, in that something needed to be done to push and evolve these two characters. As the central duo, Daria and Jane are our protagonists through the series. We see them join up at the hip in the series premiere and, aside from one episode where Jane briefly takes up Track and Field (which establishes that Jane likes to run in the mornings, a trait we see from her throughout the series afterwards), the two never experience any static. While it's not to have stability, it's also unrealistic. Friends fight and, sometimes, evolve away from each other. Showing that in the series helps to grow the reality of the series. Plus, in a show meant for teens, this asknowledges that friends will sometimes hurt each other and its how they deal with it that truly shows their friendship. 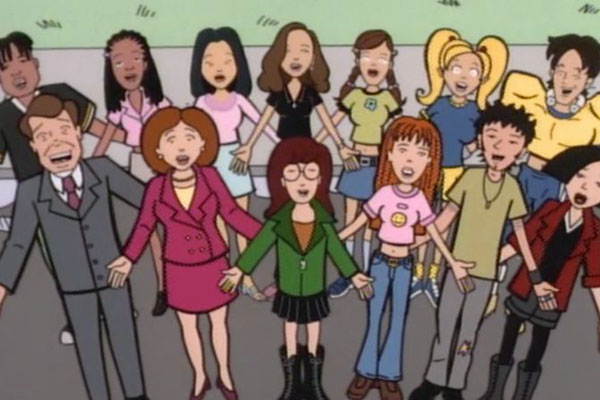 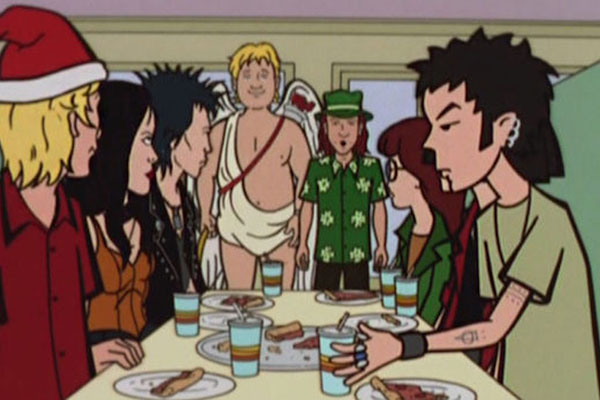 I'd also argue that pushing Daria and Jane away from each other, even for a little while, helps to strengthen who they each are as characters. Presumably these two friiends won't be together forever -- Daria is gonna go to some kind of liberal arts college while Jane will either end up at a school for art or traveling the country in a van, making weird sculptures on the side of the road. The likelyhood that both end up living in the same city after high school is rather low, so the girls have to figure out who they will be once they leave Lawndale and what it means to be apart. That first step comes here, in a melancholoy final episode of season four that seens them split apart for a time, shifting away to new avenues alone.

Really, the least interesting part of the storyline is Tom. While he's an amusing charcater, one that is clearly able to think at the same level as Daria (he's read the books she's read, is able to reference the same materials she can), he's only ever in the epsiodes to act as an agent for the story. We spend the better part of three seasons with all the characters in Lawndale and then Tom suddenly shows up, someone new, someone that goes to a different school and has a life outside of our established settings. This means that he's only in a handfull of scenes in a selection of episodes, and only to be around Jane and Daria. We never get a sense of his life outside the triangle which means we really don't know who he is as a character, not really.

That means the entirety of the last episode of fourth season, with the growing bond between Daria and Tom and their eventual kiss is only really experienced as it affects Daria. Similarly the break up between Jane and Tom immediately afterwards is viewed through the lens of Jane. We know these two characters, we don't know Tom, and thus we don't care how Tom feels about everything. He's not someone we've grown to know and care about, so if he has feelings on the matter they don't have signifigance to us. If we knew Tom, and really cared about Tom, it would be a different matter and would have deepend the story that much more.

That said, giving Tom too much time would have changed something significant about the show: it would have given a male character a leading role. The closest we have to a lead male is Daria's dad, and even then most of the time her dad is only ever shows in relation to Daria, her sister Quinn, or their mother. And while we have other male characters, students and teachers at school, they rarely have plotlines and almost never without a girl (usually their girlfriends) being involved as well. The male perspective isn't as important to the show as the female perspective which may be part of the reason why Tom is never given a level of depth to make him as fully-realized a character as Daria and Jane. 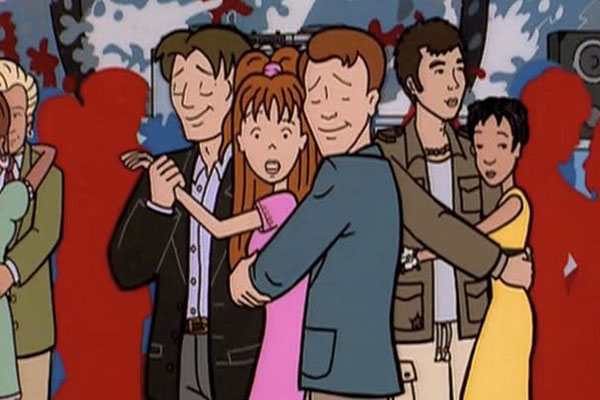 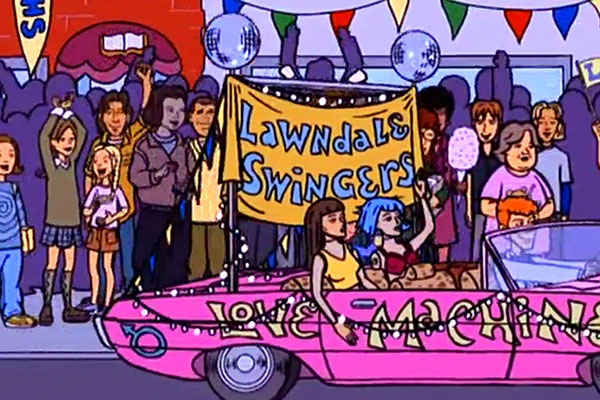 And I do think that's fair. While Tom could have been given depth and we could care more about him, maybe we don't need to. While I think he's a shallow character (shallow enough that I don't really see what Daria sees in the dude), I can respect the producers desire to keep the show focused on the women of the series and not deviate too far off course from there. With that rule in place, only way they could have made a new charcater and given them depth would have been to make them female, and then Jane and Daria would have both had to be at least bi for the love triangle to work. And then, if they were both bi or gay, the question would be "why didn't they hook up" and the series takes on a very different one (and maybe gets a little too male gaze-y in the process).

Thinking that through though, there isn't something else worth noting: for all the representation of the female perspective, and with a character of color (Jodie) in the mix as well, the one thing we don't really have is any LGBTQ+ representation. True, this was a show from the mid-1990s so maybe MTV just wasn't comfortable with that on their teen-friendly series. It's just something to note about the series now that we're twenty years removed from it. A remaked of Daria (something I still don't really think we need) would probably put a LGBTQ+ character (or three) front and center to up the representation. It's lack is noticable now, in hindsight, as I'm four seasons into the show.

Still, going back through this series, I'm pleased with the maturity the series has shown in its thrid and fourth seasons. Yes, there are some flaws but you only really notice them as you look back and think about it. For the most part this series still really holds up. In these two seasons especially it evolved its own characters and, in the process, maybe helped to give the teens watching it useful stories they could apply to their own situations.

In the episode a hurricane is headed right for Lawndale and, as the episode description tells us, everyone is so worried they break out into song. The premise is dumb, to be sure, but what makes it worse is how bad to actual music is. Most of the voice actors on the show can't sing, especially not while they're also trying to stay in character. Most of the songs are like nails on a chalkboard, they irritate me that much. Plus, really, nothing happens in this epsiode as the hurricane moves on and everyone is fine. It's a double-team of awfulness.

Maybe the goal was to do an anti-musical, with the worst music possible. If that's the case, I can understand why they made the episode they way they did. That doesn't make it bearable, though.

As the episode opens, Quinn and mother Helen head out for various projects while Daria is at home alone. Or so she thinks as, soon, her father is calling up from the upstairs bathroom in need of toilet paper. This sends Daria out into town to hit the local pharmacy only to get caught in the middle of the Lawndale High homecoming parade. She then encounters various other characters and has a number of little misadventures in the process. It's also the first episode where she and Tom, who is at the parade looking for Jane, really seem to bond.

"Parade" is a snappy little episode that gets by on the power of its vingiettes. In a way it reminds me of "22 Short Stories About Springfield" from The Simpsons (itself a play on the film Thirty Two Short Films About Glenn Gould) in that its has a bunch of little stories all tied together, interlacing with each other, as we focus on various characters from the full run of Daria that she encounters along the way. It rewards fans of the series for watching all the way through, plus it's just a lot of fun in its own right. Snappy and funny, this is easily the best episode of the two seasons.