Jason's On the Town

So by this point in the Friday the 13thOne of the most famous Slasher film franchises, the Friday the 13th series saw multiple twists and turn before finally settling on the formula everyone knows and loves: Jason Voorhees killing campers 'round Camp Crystal Lake. series Jason had been killed off, copy-catted, and then resurrected. He'd fought and killed so many people, including a telekinetic girl, that it was hard to think what else the character could do. And, for what was supposed to be his next big death, a final chapter on his second final chapter, the producers decided to send Jason to the Big Apple. Clearly, in their minds, this was the perfect way to send the series out on a high note. 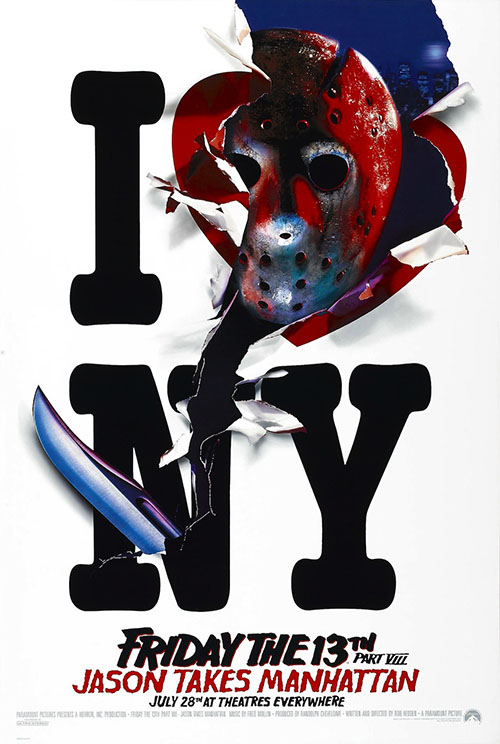 Now, I realize I haven't exactly been kind to the Friday the 13th series. There's only been one movie in the whole run I genuinely enjoyed (Part VI: Jason Lives) while I found the rest to be all equally tedious affairs. I've never once understood why these movies are considered classics of the Slasher genre. Even still, I'd watch any of these films again before I willing sat through another round of Jason Takes Manhattan.

This film is just an absolute and total mess. That's partially the fault of the producers since they'd steadily wrote themselves into a corner. Remember, it was only two movies ago that the series introduced supernatural elements when it brought Jason back from the dead. They they introduced psychic abilities with the not-Carrie girl in The New Blood. I'm sure it felt like they had to keep raising the bar on that front, so this film brings in a girl with some kind of psychic vision/dream connection to Jason. Why? No clue, since the film never actually explains it at all. She just sees visions of child Jason drowning and freaks out every time it happens (which, to be fair, I probably would too).

The dream connection makes this film feel a lot less like a Friday the 13th movie and more like a weird Nightmare on Elm StreetThe brain-child of director Wes Craven, A Nightmare on Elm Street was his answer to the glut of Slasher films that were populating the multiplex. His movie featured an immortal character, Freedy, with a powerset like none other, reshaping the expectations for Slasher movies to come. transplant, except Jason doesn't stalk anyone in their dreams. He still just shambles about and magically appears behind people right before he kills them (artlessly, of course). In just about ever respect this film abandons the standard feel of a Friday the 13th movie, generally for the worse. 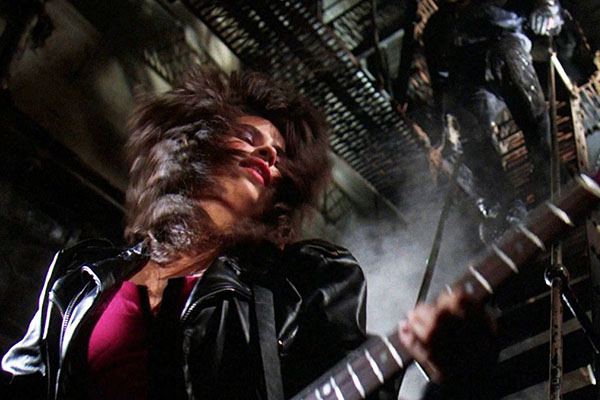 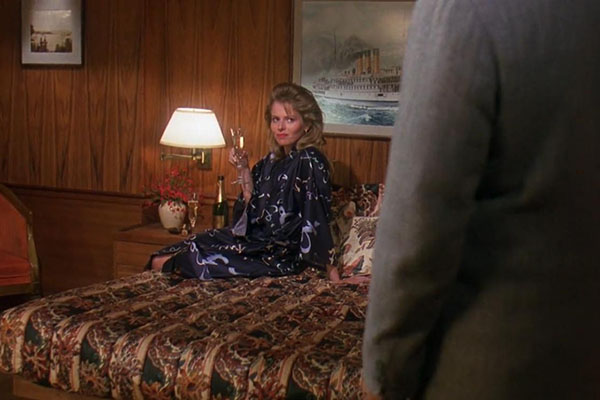 For starters, the classic intro to the movies is abandoned this time around. While the black background, block text, and ominous music for the opening credits was pretty basic, after seven movies it had become kind of iconic for the series. Here, though, the movie opens with a terrible rock song layered over a montage of New York City. It feels like a low-rent intro to West Side Story and it just doesn't work. It immediately sets the movie on a bad tone, one that never really relents at all.

From there we go to Crystal Lake where a couple of young lovers are piloting their boat across the water for a romantic tryst (because when I'm thinking romance I think to go to the site where a repeat mass murderer committed his heinous acts). Naturally enough they some how accidentally manage to awaken Jason (who was once again drowned at the bottom of the lake at the end of the last flick). Jason, of course, gets onto their boat and kills them in his usual stalk-and-stab-thrust style. Having killed these two, he then lingers around the lake (which is now much larger than it's ever been before) for a larger boat going on a senior class trip to New York. Taking this as his opportunity, Jason climbs aboard the boat and proceeds to make his way through the decks, picking off high schoolers are they wander off by themselves. He's always magically there, right behind them, right as they're alone, and they never stand a chance.

Eventually the boat is destroyed enough (somehow) by Jason's actions that a few survivors have the abandon ship. They then take the lifeboat ashore and find themselves right at New York City (so, what, it was a very short pleasure cruise). Despite picking a random port out in the middle of nowhere, Jason magically follows right up behind them and continues his work, taking out the remaining people one at a time until there's only two kids. He then single-mindedly chases them across the city (which is mostly represented by studio back-lots when it's not using Vancouver for establishing shots). It eventually ends with an unsatisfying thud where Jason dies (again, of course) and the survivors just walk away as if to say, "well, none of us really wanted to be here anyway."

There are so many bad decisions in this movie, but the biggest problem really is that the film has no real direction, just a vague idea of a "hook". "Let's put Jason in New York," was clearly the plan but the movie had neither the talent nor budget to make that happen. Instead of just having Jason be in New York and kill a bunch of people, most of the movie is spent on a boring boat where the action just drags by. The ship isn't that big, mind you, and Jason is not a small guy, and yet everyone is surprised when Jason just magically appears to pick of a single kid. They should be tripping over Jason in the halls, scootching past him one way or the other as they go about their activities. There's comedy that could have been had from this setup, but the film doesn't have the wit to make this section of the movie work. 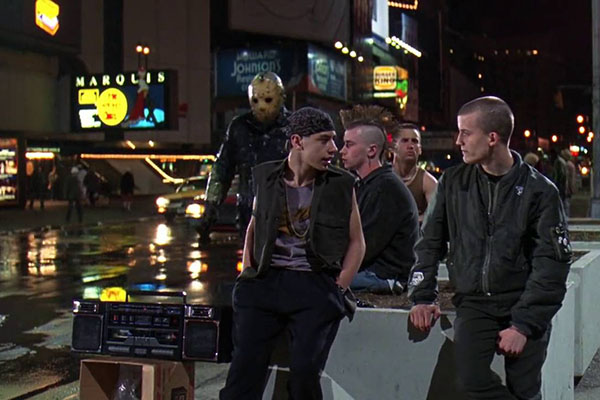 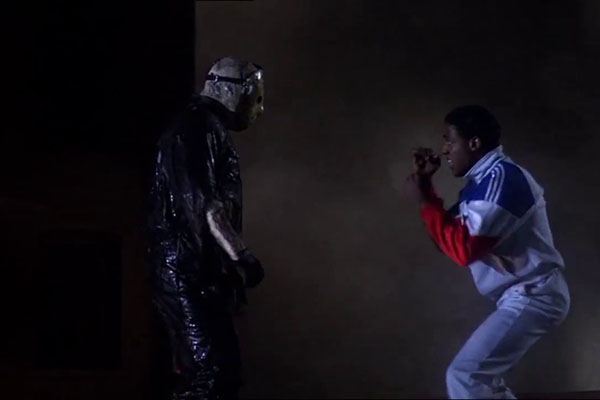 And when the film finally gets Jason to New York, it's not actually New York. Most of the city sections are filmed on terrible sets that look so obviously fake you can't take them seriously. The campground setting was, surprisingly, a boon to the series as it was cheap to film at and looked realistic (because they could just film at a campground). Filming in a real city, though, requires a lot of money and resources, and the Friday the 13th films have never had either. The upgrade in setting didn't come with an upgrade in resources causing this entire section to fall apart. It's laughably bad right when the film should be building to its climax.

Plus, if you pay attention, any time the film is actually shot on-location (and not a studio set), Jason can't actually do any killing. He stalks past tons of people and never once stops to kill any of them. Jason has never once shied away from picking off every person he sees ad yet here he decides to continue following two running targets when there's a whole plethora of easy pickings to go after. Clearly the film couldn't do any of the fun murder-violence on real streets (due to whatever agreement they had with Vancouver) but it's just unrealistic for the character we've seen up until this point.

Finally, when we get to the ending it just makes no sense. The setup for how Jason dies -- toxic waste in the sewers -- is stupid. For one, why is the city flushing toxic waste through their waste water system? Realistically no city would every do this as it's a contamination of drinking water resources. Secondly, Jason has been shown to be immune to everything. Even water, his one "weakness" is a temporary fix at best. But suddenly, somehow, dousing him in raw sewage kills him? it just doesn't work (nor does the fact that once he's douse he somehow reverts to being a small child, a twist that simply boggles my mind with its stupidity). The whole last act in "New York", the raison d'etre of the movie, is also its worst act.

Nothing about this movie works. Not the setup, nor the main action on the ship, nor the final "climactic" city sequence. It's all stupid from start to finish. As a film in the Friday the 13th series, it sucks. But as the supposed ending for the series it's a complete waste. I may not like the Jason movies but the character deserved better. Thankfully, at least in comparison to this travesty, Jason does get a second chance at a big finish...

Premarital sex, a classic sin in this genre. Two young lovers go cruising on Crystal Lake, at night, around where Jason last "died" in the previous film, all so they can have a private tryst. Jason clearly couldn't let this stand.

Jason comes after the two teens on the boat. Using what he can find he takes out the boy with the butt of a harpoon gun (having shot, and missed, with the harpoon. He then chases down the girl and finishes the combo with the harpoon.

Sixteen. The young lovers on their boat, followed by seven teens, two adult chaperones, four members of the ship's crew, and a gang member.

It's implied at least three other teens went down with the ship and drowned, but we don't really get to see it and off-screen deaths don't count. Also, a gang member is implied to be dead, but the damage he takes would have only knocked him out, and, again, there's no shot of the body. And a cop is dragged off screen by Jason, but since we don't see him die, it, too, doesn't count. Jason needs to learn to kill more people properly on screen.