And Thus Did Jason Return Once More

Fans of Slasher flicks already know that Jason Voorhees is an immortal killer that stalks the shores of Camp Crystal Lake. That's the version of Jason we know from modern versions of his films, but it took six films for the Friday the 13thOne of the most famous Slasher film franchises, the Friday the 13th series saw multiple twists and turn before finally settling on the formula everyone knows and loves: Jason Voorhees killing campers 'round Camp Crystal Lake. series to adjust to that new normal. Remember that in the first movie, Friday the 13th, it was Mrs. Voorhees that stalked the lake, getting revenge against the camp counselors (and those like them) who let her son drown while we was at camp. That motivation was retconned in Part 2 so that she wanted to kill the people that almost let him drown, and with Mama Voorhees dying in the previous film, Jason picked up her mantle. 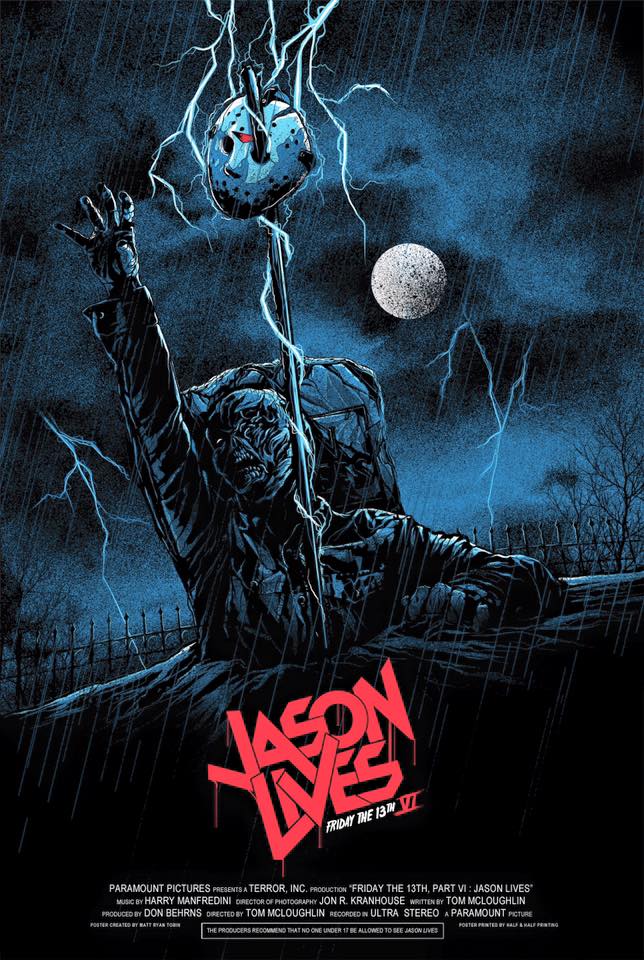 That carried on until Jason was finally put down, for real, at the end of The Final Chapter and the series was supposed to head in a new direction moving forward. However, the next film in the series, Friday the 13th: A New Beginning, was supposed to launch Tommy Jarvis (one of the only survivors of the fourth movie) as a new killer for the series. Instead the film was largely hated by fans of the series (and panned by critics), and the producers decided they needed to take a different approach for the follow up. A New Beginning was essentially removed from continuity, Tommy was rebooted (with a different actor, Thom Mathews), and it was decided that Jason would have to come back. Somehow.

And thus the series did create the immortal Jason we all know. When Tommy heads to the cemetery where Jason is buried, he digs up the killer to burn the corpse and scatter the ashes in an attempt to ensure the killer can never come back again. However, lightning strikes the corpse, giving it new life, and Jason lives (title drop) once more... and since he's back, he may as well go back to killing camp counselors. The cops end up thinking Tommy is the killer (a nice play on the original, intended plot for this movie), but we all know the truth. And soon, Crystal Lake will learn how bad things really are for this sleepy little hamlet.

In some ways, Jason Lives is a solid course correction for the series. Honestly, A New Beginning was too much, a film that gave in to all the worst impulses of the series without really adding anything new or interesting to the formula. If anything, all the extra gore and nudity in the fifth movie somehow made it seem less shocking and more generic than any of the previous films. Say what you will about Jason Lives, it at least has some style.

For starters, this sixth film has some humor about the whole situation. The Friday the 13th films are all campy, low-budget Slasher schlock, but this is the first film in the franchise to at least have fun with it. Jason acts as kind of a straight man, getting reaction shots where the film derives some humor from him seeing someone do something idiotic and tilting his head in response. It add some levity, but it also makes Jason into an actual character. He's still the shape in a mask, but there's a little bit of personality behind him, a touch of soul. It helps both in the characterization and in the vibe of the whole movie. It's fun and funny in a way the previous films never achieved. 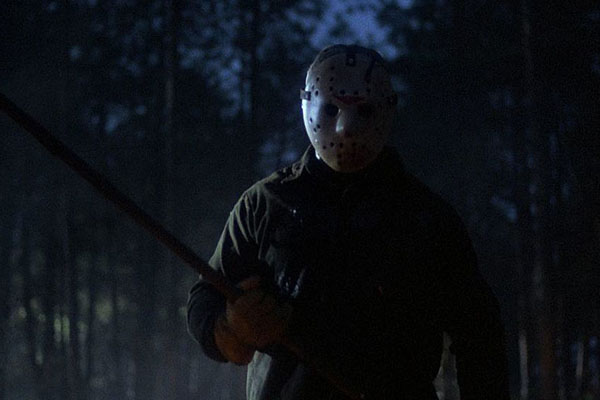 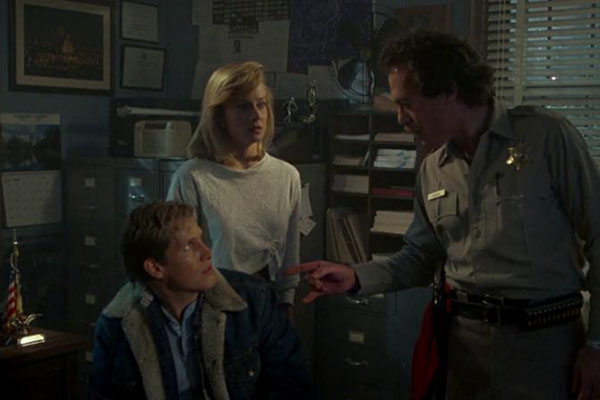 The film also features a few solid moments of actual tension. Previous films were very rote in their kills -- while Jason would switch out the weapons he'd use, ever kill was invariably the same. Here, though, Jason will stalk his victims, letting the tension build. He'll vanish from their line-of-sight, letting them scare themselves before going in for the kill. This kind of build up helps the kills, adding a thread of actual terror to the proceedings. This is the first film in the series to understand scares at all, which is a big step for the franchise.

That said, the film still doesn't quite reach its full potential. As much as I like how they made Jason into a real character (or as close as he's ever been, anyway), the rest of the characters in the film are pretty meh all around. The new Tommy is a pretty lackluster hero, more whiny and needy than a strong presence to go up against Jason. Mathews is a better presence as Tommy in the film than John Shepherd's Tommy in A New Beginning, but that was a pretty low bar (Sheperd had a criminal lack of charisma in the role). There's no solid hero to get behind in this film, which leaves you rooting for the oddly charismatic Jason, honestly.

The final girl really isn't much better. Megan Garis (Jennifer Cooke) starts strong, a feisty and fiery force that seems like she could be a good person to go up against Jason. But then the last act of the movie comes along and Megan crumbles, unable to stand up for herself at all. Maybe that's a realistic reaction after seeing all your friends get butchered by an undead madman but it doesn't make for a compelling hero. Neither she, nor Tommy, are a match for Jason, leaving a void in the film.

But then everything falls apart in the last act, really. Jason did a great job with his stalk-and-kill magic in the first half of the movie, but by the back half his kills become less interesting, much more rote like in previous films. Part of that is, frankly, because the kills come much more often in the last act, which most of the counselors (and some cops) taken down like dominoes as the action ramps up for the climax. This is a problem most of the films in this series have, prioritizing kills over scares. I like a good body count as much as the next horror fan, but good horror strikes a proper balance and Jason Lives loses that by the time the climax rolls. 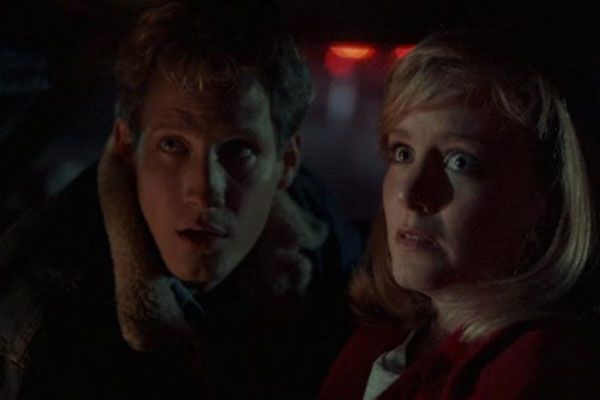 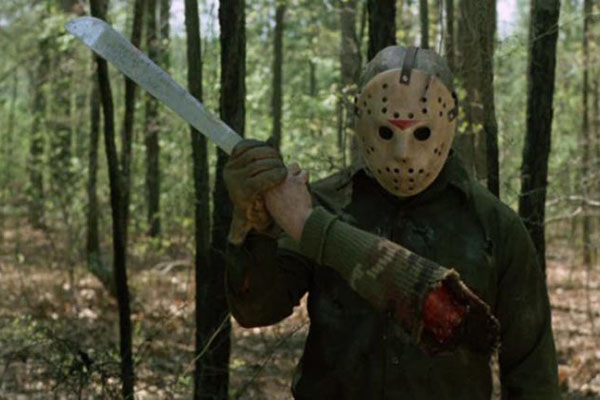 There are some issues with Jason Lives that hold it back from greatness. Still, it's far an away the best film in the series yet. We can only hope the films can stay at least at this level moving forward. I strongly doubt it, but we'll see soon enough.

Stupidity. Two people went and dug up Jason so they could ensure he stays in Hell. This, naturally only awakens the corpse. That's gross stupidity in any film.

After awakening, Jason grabs the heart out of the chest of one of the two bumbling idiots. Gross and satisfying.

Nineteen, starting with one of the idiots at the cemetery followed by two unlucky drivers in the backwoods, five corporate paintball commandos, the grave keeper, three cops, and, of course, six convenient camp counselors.