My Love/Hate Relationship with the Legend of Zelda

The Legend of Zelda: Breath of the Wild

For the longest time I considered myself a fan of the Zelda series. I absolutely fell in love with The Legend of Zelda: A Link to the Past when it came out, playing through that game over and over again. While I was never good enough to get through the first Zelda game, and I could barely survive more than a few moments in Zelda II, I still liked what the series had on offer. I put time in with Link's Awakening on the Game Boy and kept my ears open for anything that was described as "Zelda-like (which is how I got into the Seiken Densetsu/Secret of Mana series).

Somewhere along the way, though, I stopped enjoying the games so much. Everyone raves about Ocarina of Time, but while I managed to beat that game I wouldn't say I really enjoyed it. Something about the game felt off to me (maybe the long, boring stretched of moving across the countryside, or the tedious dungeons that were more about combat than exploration). Sure, it's a decent 3D game, but I don't considering it a great Zelda, and certainly nothing to hold a candle to A Link to the Past.

Ocarina of Time was where it all started coming apart for me. I barely made it two dungeons in to Wind Waker before I got bored and started playing something else. The Oracle games didn't hook me, Minish Cap seemed cute but shallow, and I absolutely hated Twilight Princess. Ugh, that wagon chase section was so obnoxious, and I was so disinterested in the game leading up to it, that I just set the controller down and never looked back.

And that was the case for me for years. Nintendo would rerelease games, or put out side adventures, and I didn't bother checking them out. By the time Skyward Sword came along, I knew all there was to know about the game from having checked out any of the Zelda games from the previous ten years. There wasn't anything there for me (even watching videos of it now on YouTube for this article, I still don't see anything to care about in that game). Zelda had lost me.

Well, that was until Breath of the Wild. I resisted it for a while, ignored the hype, and figured "meh, same old Zelda." It was only when the reviews were coming out and everyone was talking about how different the game was, that it ditched all the old conventions of the series to make something about as far from a classic Zelda title as you could get that I decided to pay attention. Open-world Zelda sounded interesting, kind of like the first couple of games, and the fact that most of the items (that had started to weigh down their series with their over use) were gone gave me hope that the game would be very different. 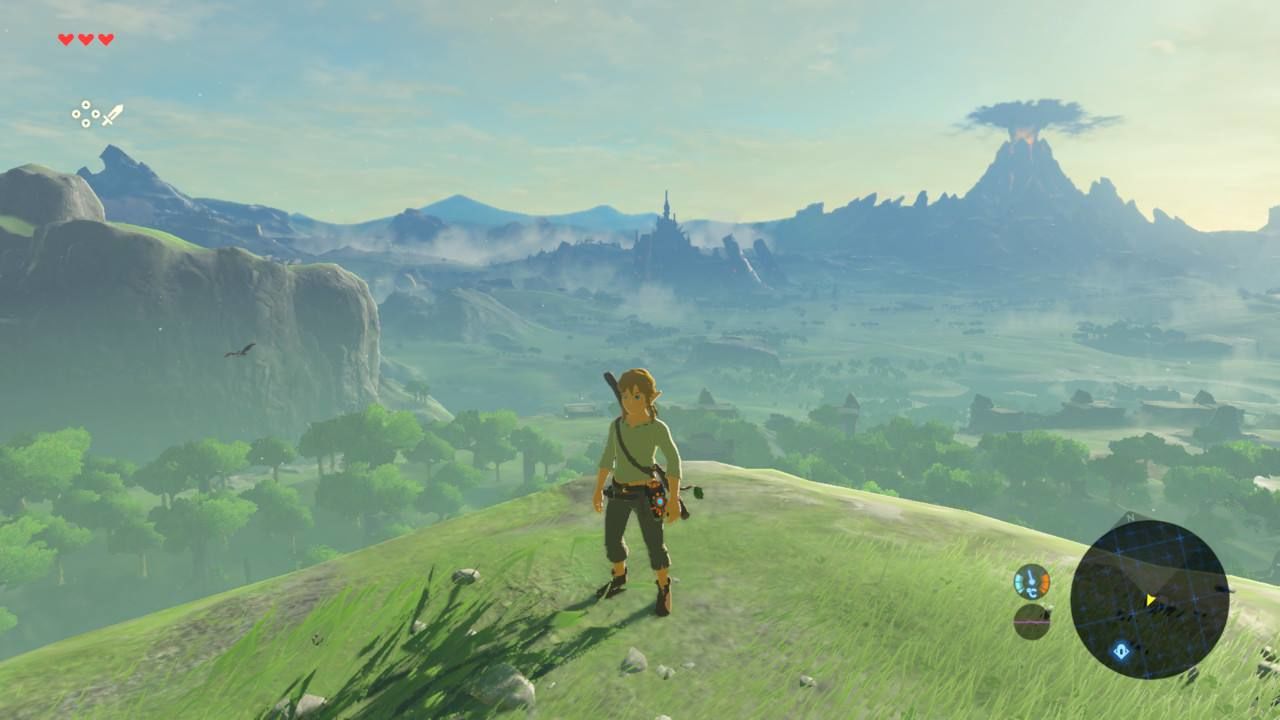 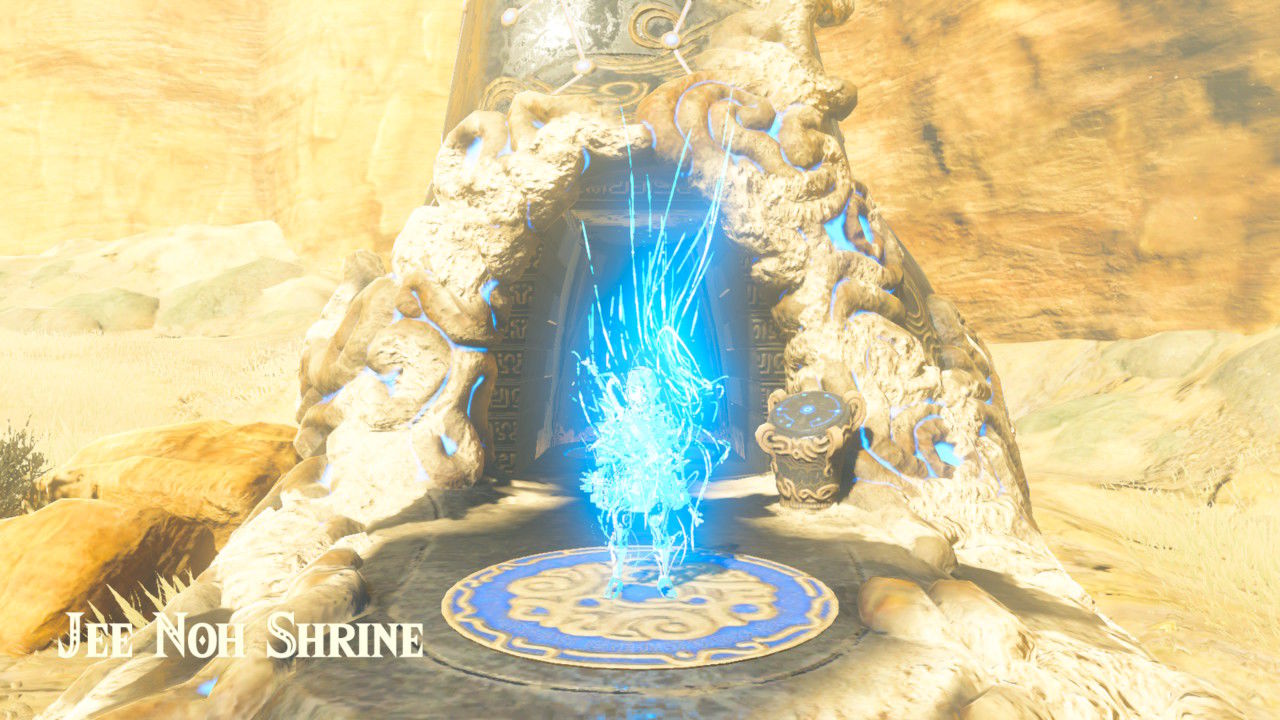 It really is. I spent a good 60 hours or so exploring the world in Breath of the Wild, finding all the shrines, conquering the four mecha-beasts, and working my way up to Ganon (and yes, I did beat him). It was fun, and beautiful, and a very different kind of game.

What I enjoyed about Breath of the Wild was the openness of it. The fact that I could basically go anywhere from the start (after a short tutorial section) and find my own way in the world was great. The basic goals of the game were well marked and I didn't have to do a bunch of searching to figure out "okay, I need to do this, or these, and then I can finish up this." No questing just to find Dungeon 4 all so I can learn I need a ladder to get through this one room. Nope, once I finished that tutorial I had everything I needed to go anywhere and do anything.

I spent most of my time ignoring the main plot of the game (and all the big side quests, for that matter). Instead I set off in a direction and stated activating the huge towers dotted around the world so I could open up my map. Once I had most of that done, I then went in search of the little shrines across the world -- mini-dungeons that gave me spirit essence (or whatever) so I could then activate worship spots to gain hearts and stamina. It was a simple goal and allowed me time to just enjoy the huge, open world.

That world is gorgeous. Varied and detailed, the landscape itself was a pleasure to look at and explore. The fact that Link can basically scale any surface was a bonus as it meant I could look at a mountain and go "I wanna climb that", and then go do it. The sheer enjoyment of being able to wonder "what's over the next rise" and then setting off to explore it without any walls to block you or the game telling you "no" was an absolute treat. 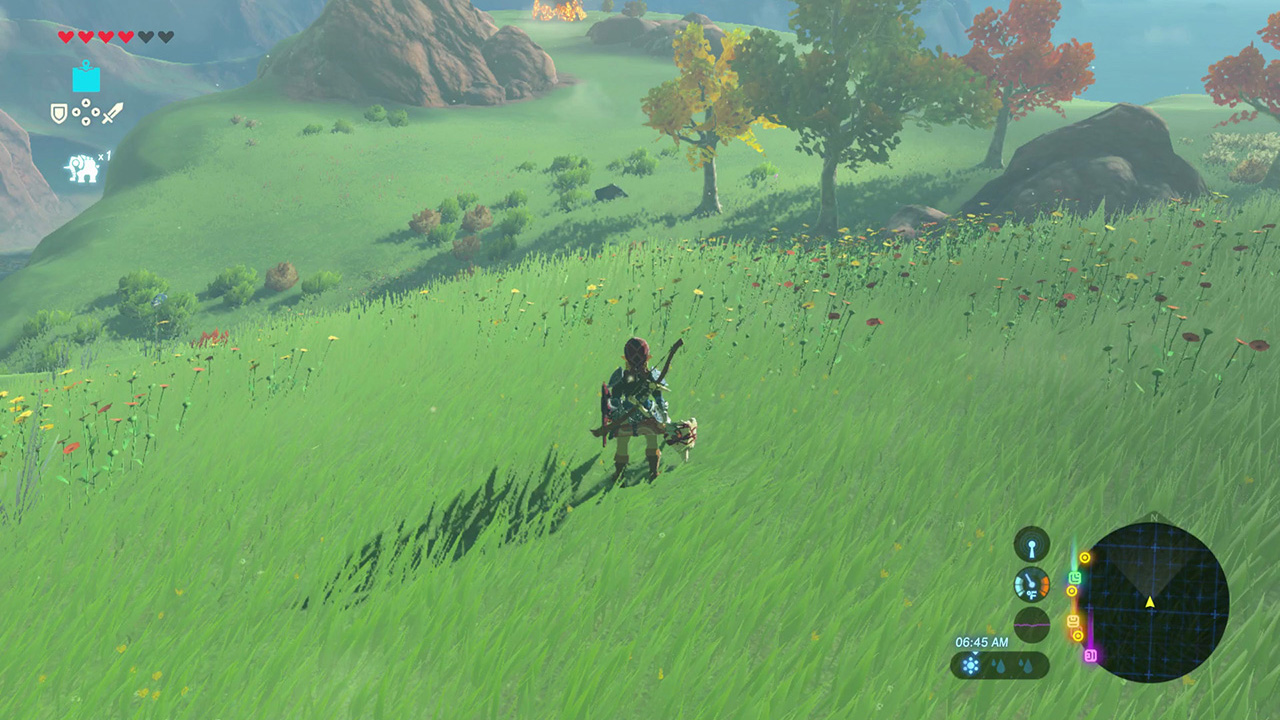 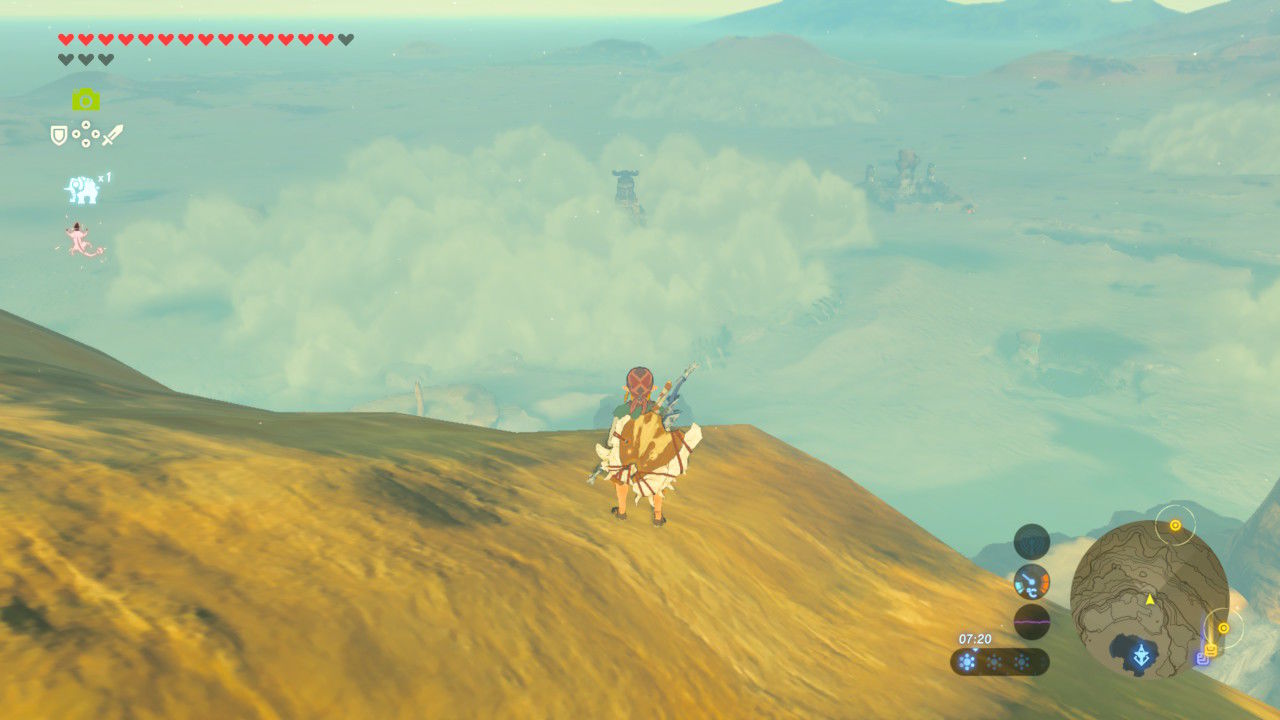 The fact is that the open world of the game was so good that the actual plot (what some might argue is the meat of the game) was pretty lackluster. There are four mecha-beasts Link has to explore, and once he defeated the Ganon-spirit possessing each of the beasts, the mecha is then converted to aid Link. Link gains a power, and the beast will help in the fight against Ganon at the end of the game. Pretty basic stuff.

The plotlines leading up to the dungeons really weren't all that great to begin with. Go to this place, help this person out, do this fetch quest, and then play a mini-game to gain access to the dungeon. It felt pretty tired the first time I had to do it, and then to go through and essentially have to do it for each one felt like a chore.

Then there's the fact that I just couldn't "get" the dungeons. I inevitably reached a point (usually pretty early) in each dungeon where I was just at a loss as to what to do or where to go. I'd spend an hour in each one, banging my head against the wall, until I finally gave up and went to walkthroughs to show me what to do. I wanted to do it for myself, but the game just wasn't showing me what I needed.

The one dungeon I really enjoyed exploring was Hyrule Castle at the end of the game. The lead into the castle felt epic, and was only enhanced by thee sweeping music. I absolutely loved the time I got to spend in the castle, right up to the point where it abruptly ended. Seriously, the whole game was pointing you to get to the castle and find Ganon, and yet I don't think it took me longer than fifteen minutes to make to through the whole palace (and much of that was spent fighting a giant Lyonel near the end -- a fight that, afterwards, I realized wasn't even required). Ganon himself was a fine fight (lengthy but without any real surprises by the time I'd fought through the whole rest of the game). 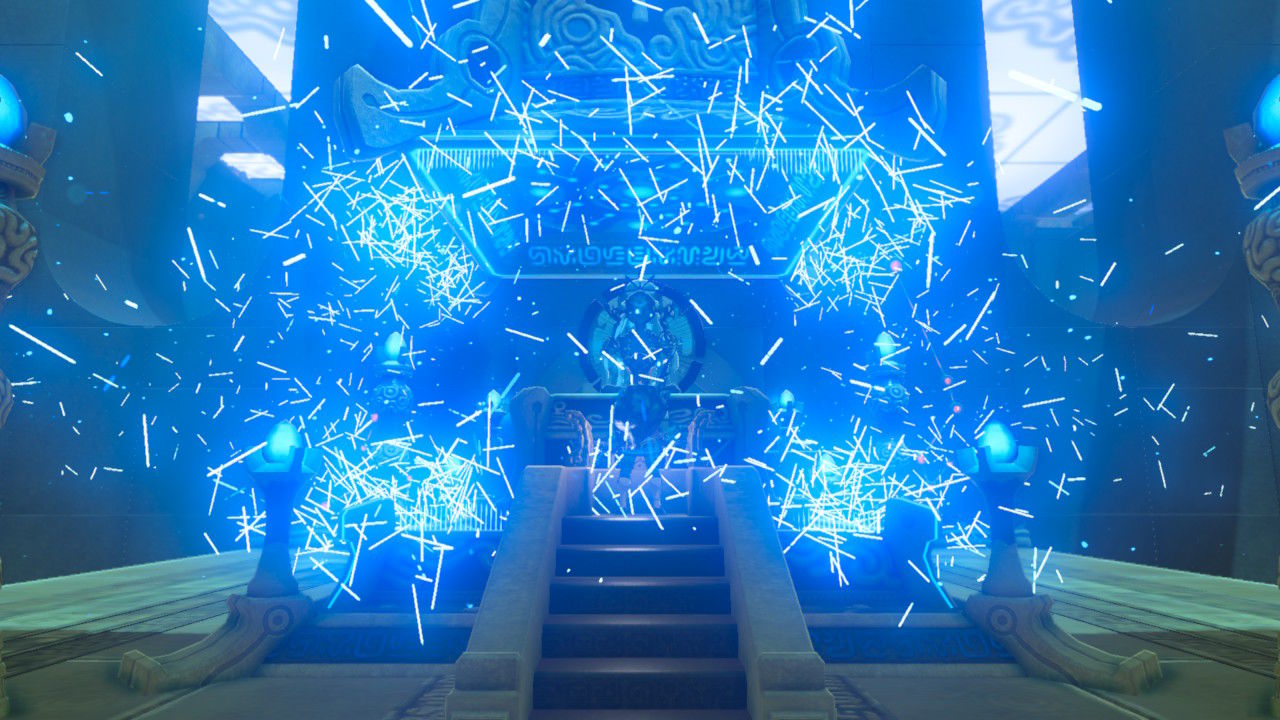 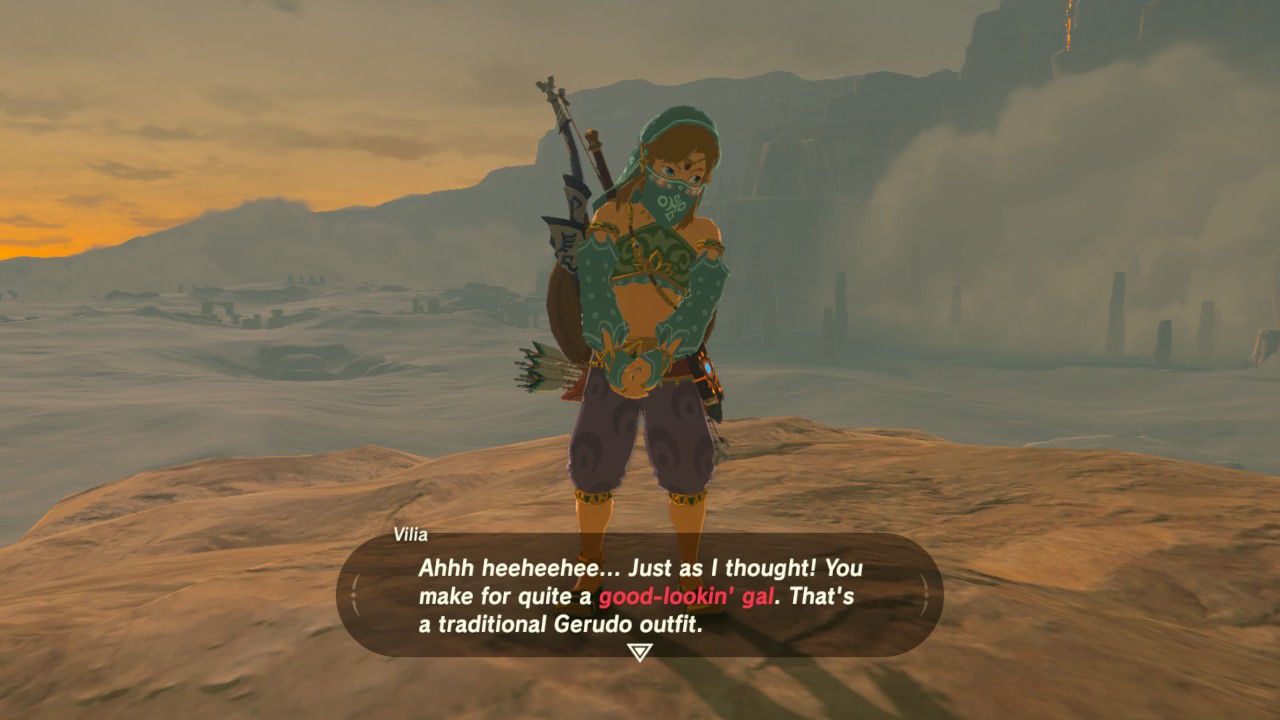 And then the game just kind of ends. You save the world... except going back in afterwards you start before the fight with Ganon at the top of the castle. I'm probably spoiled by open-world games where, after you finish out the missions you get to go back out in the world and bask in being hte biggest bad-ass. Here, though, finishing the game doesn't change anything. You can continue exploring, but Ganon is back, his power is still ruining the land, and you still have a job to do. It felt like a giant let-down.

Let's be clear, I really enjoyed Breath of the Wild for the open-world experienced it provided. The issues I had with the game, though, kept it from being the best game in the series for me. It did give me hope for the future of the franchise, something I hadn't felt in a long time.

So here's hoping Nintendo can continue this experiment in the next game and keep doing new and interesting things with the Zelda series. Right now, for sure, I'm on board to check out at least one more title just to see where it all goes from here.